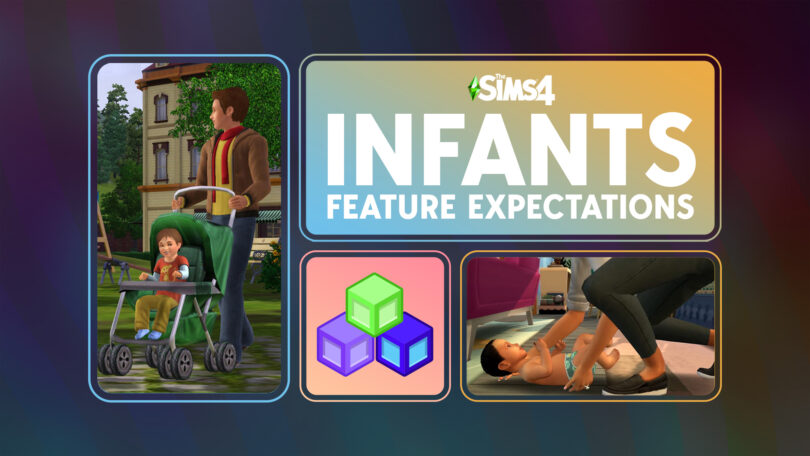 What does the community expect to see with The Sims 4 infants update? We have some ideas of our own, plus a poll for you to weigh in!

The Behind The Sims Summit was an exciting event for many reasons but one of the biggest reasons was the announcement of “better babies” that the community had been asking for. More accurately, a new life stage called infants is planned for The Sims 4. The reveal showed an infant crawling across the floor before an adult Sim picked them up and there appeared to be both a baby gate and a playpen in the background. Since then, we’ve heard and seen absolutely nothing about The Sims 4 infants. All we know for certain is that they are being added to the base game for free sometime in early 2023.

This isn’t the first time a whole new life stage has been added to the game in a free update; toddlers were brought to the game in 2017, along with plenty of new early childhood development toys and objects for them to interact with. The toddler update was excellent so expectations are pretty high for infants in The Sims 4. What exactly are the community’s expectations? We have a few ideas!

In The Sims 2, babies could be bathed in the kitchen sink, which was adorable. The Sims 3’s Store changing table came with a baby bath as well. We would love to see both sink baths for infants and a baby bath for the changing table in The Sims 4 because more options are always a good thing! There are lots of baby baths for sink bathing available in the real world so it would be great if The Sims Team went one step further and included those. We think the chances of this being a thing are good, considering The Sims Team sneakily added in the ability to clean up toddlers at a sink a while ago.

We did not get strollers for babies and toddlers until The Sims 3 but when we did, they were awesome! Being able to take a stroll down to the park with your new baby in a stroller was adorable and convenient! However, one drawback to strollers in The Sims 3 was that you could not leave your baby sitting in the stroller unless you were actively pushing them in it. So even though you had a stroller right there, you still had to put your baby on the ground to do something. Not ideal. We want strollers for both infants and toddlers in The Sims 4 and we want the ability to keep them in there while out places! Plus the common space around home lots allows us to take leisurely strolls with our infants without going through a load screen, so strollers are still a must-have feature.

We’re pretty sure playpens are at least coming with the Sims 4 infants life stage; we saw one in the background of the reveal video. But The Sims 3 Store also had baby walkers available for toddlers. These walkers were not usable by babies. Babies in The Sims 3 were wrapped up in swaddling blankets and looked like larvae. Infants in The Sims 4 clearly have limbs, though, and if they are learning to walk, a baby walker would be perfect for them.

Once upon a time, The Sims 2 had an online store and one of the items available for purchase was a baby bouncy swing. The Sims 3 also had a version of a baby swing available in The Sims 3 Store. The swings were not only adorable, but useful for soothing your little one when your Sims were busy taking care of the household chores. We think it would be a crime if these were not available for The Sims 4 infants life stage.

Remember the baby play mat with dangle toys from The Sims 2? It was another item available in The Sims 2’s online store way back when. It gave babies an opportunity to play on the floor by themselves and it was a lifesaver for when your Sims got busy during the day. Baby was happy with their toys and their parents were able to work on their careers a little and tidy up the house. We want these to make a return to The Sims 4 for sure! We’d like to see the ability to have tummy time added to them, too, as this is an important part of a baby’s motor development.

Modern Parenting for The Sims 4 Infants

So far, we’ve been talking about parenting stuff from past Sims games which came out over a decade ago. Over two decades ago for The Sims 2. Parenting has changed a lot in the past 20 years. Things that older generations would scratch their heads at are now commonplace for many younger parents. For example, co-sleeping is now much more common than it was 20 years ago. Baby cribs that can be attached to a double bed for co-sleeping purposes are all over the place. These co-sleeping cribs have a safety barrier in between parents and child for safe co-sleeping. We’d love to see that as an option in The Sims 4 (but not the only option; we still want our traditional nursery cribs, The Sims Team!)

Can We Please Rock Our Sims 4 Infants in Rocking Chairs?!

Okay, we know this is unlikely since rocking chairs came with Nifty Knitting Stuff. Still. Rocking chairs are pretty much useless and add very little value to gameplay. They would be so much better if we had the ability to rock our infants to sleep in them or sing to them.

There is so much more we could add to this list. Pacifiers, cribs, animated baby mobiles, lots and lots of adorable baby clothes in feminine, masculine, and gender-neutral styles. We could go on and on. But instead of that, we want to hear from you! What features do you want to see come with The Sims 4 infants life stage?

Want more polls like this? Check out our frequent Community Polls!

What do you want to see with Infants in The Sims 4? Join the conversation!