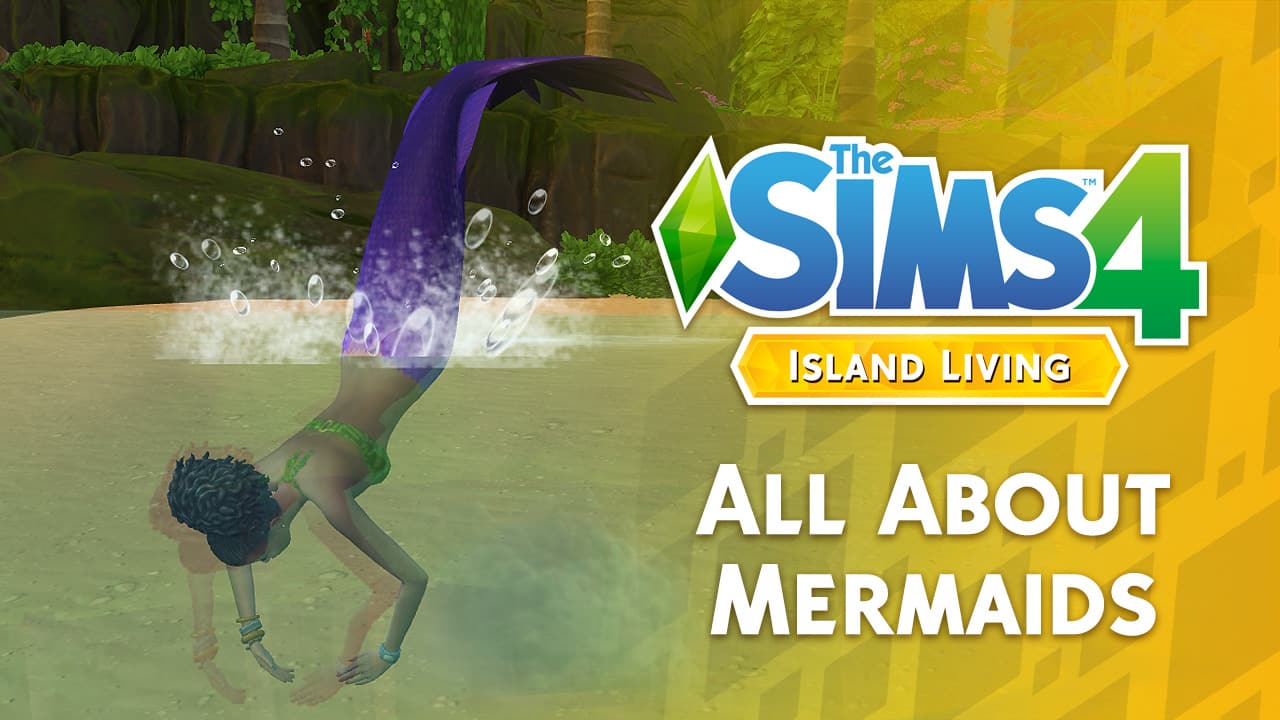 Yep, you read that title right. Mermaids are finally here! They come with The Sims 4: Island Living and they are better and more powerful than ever! Read on to learn more about these enchanting (and sometimes deadly) creatures of the deep sea…

Mermaids can be created directly in CAS by selecting the occult option when choosing to add a new Sim to the household. Existing Sims cannot be made into a mermaid in CAS (but they can become mermaids in-game! More on that later!)

Like aliens and vampires, mermaids have both a human form and an occult form. You can dress up their human form the same way you would with any human Sim, but the mermaid form only has one outfit category; swimwear. Mermaids have a variety of customization options tailored specifically for them. You can choose both the style and colour of their fins. Some fin swatches have neat patterns or shimmering scales. For feminine mermaids, you can also choose from a variety of tops, ranging from human swim tops, to coconuts and seashells, to chest scales that extend up from the tail. Mix and match fin and top styles and colours as much as you like!

Mermaids also have some new glowing/patterned eyes and face presets designed just for them. Create the perfect recreation of Ariel, or opt for a style more like the eerie merfolk out of the Harry Potter films. It’s all up to you.

TIP! Don’t want your mermaid to look anything like their human form? Unlink the two forms in CAS and any changes you make to one form won’t apply to the other! Link them again whenever you want a change to stick for both forms. Neat, huh?

Mermaids age at the same pace as human Sims. Sims of all ages can be mermaids, but toddlers and children won’t grow their fins or display any mermaid abilities until they become teenagers. 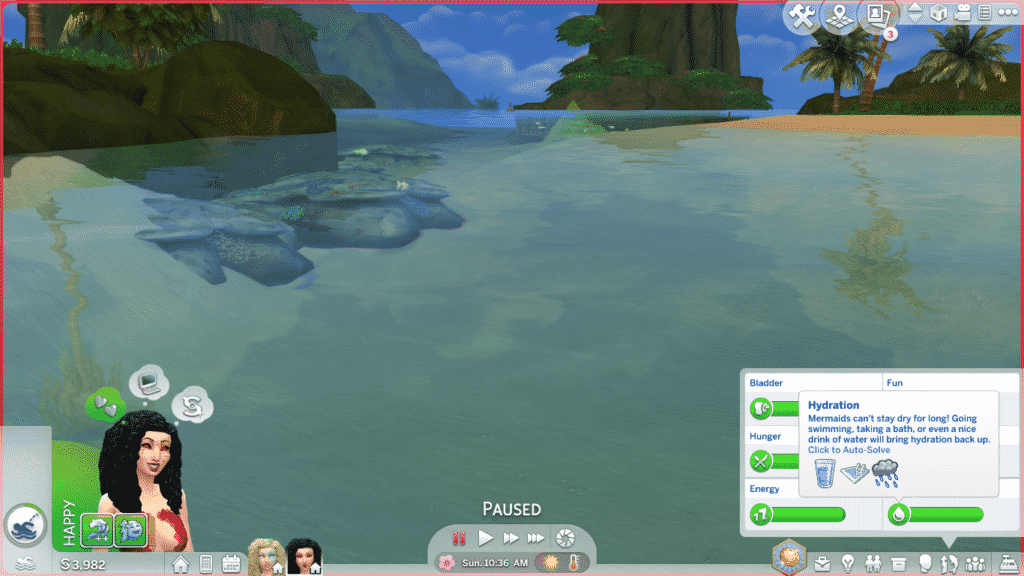 Mermaids have all the same motives human Sims do except for one. The hygiene motive is replaced with a new hydration motive for mermaids. Mermaids can walk on land as humans, but they can’t stay out of the water for extended periods of time. They need to be in water frequently in order to thrive. The Hydration motive will decay slowly over time if a mermaid is not in water. Baths, showers, and drinking water can help restore the hydration motive, but mermaids are happiest when outside in open waters.

The hydration motive serves a second function; it is also a mermaid’s power source. The more hydrated a mermaid is, the more powers they can use. A dehydrated mermaid will not be able to use their powers. More on that in the next section.

PSST! Did you know mermaids gain Fitness skill from swimming just like human Sims? Since mermaids spend most of their time in the water, this makes them super athletic!

Mermaids do not have a skill tree. All mermaids have the same abilities and limitations, but their traits do influence what actions they can and can’t do. Mermaids with the Good trait will not be able to do any serious harm to human Sims with their powers. Mermaids with the Evil trait will not be able to use certain powers that benefit human Sims. Mermaids that have neither of these traits are more neutral and can use all mermaid abilities.

For more information about dolphins, check out our article, The Sims 4 Island Living: All About Dolphins!

Mermaids have some other abilities that do not cost Hydration Points. They are just innate perks of being a mermaid.

Mermaids don’t have many limitations. The ones they do have are pretty minor, but there are a few things your mermaid Sims will not be able to do.

You don’t have to make a mermaid in CAS. Human Sims can become mermaids by eating mermadic kelp. 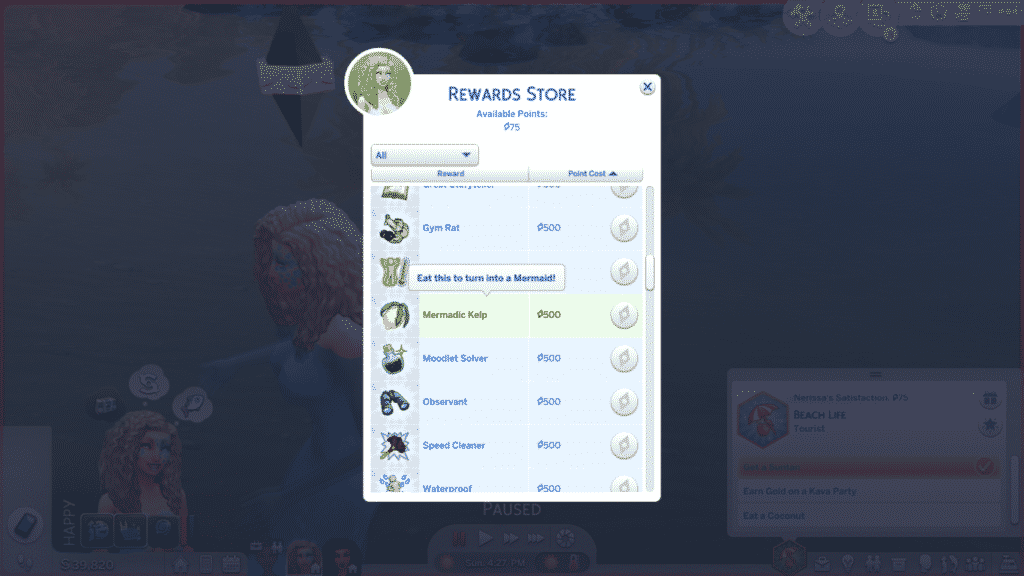 Once your Sim has some mermadic kelp in their inventory, click on it to have your Sim eat it. They will immediately get an Energized moodlet called Strange Sensations which hints that your Sim should probably find some open water to go swimming in. This moodlet lasts 24 in-game hours.

If your Sim enters the water while they have the Strange Sensations moodlet, they will transform into a mermaid! 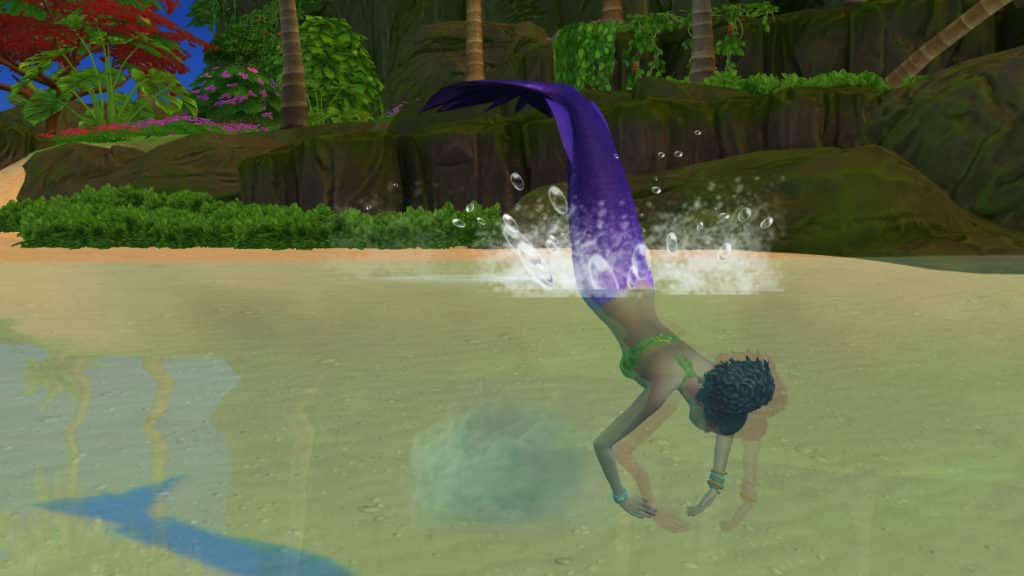 TIP! Tired of the aquatic life? Have your mermaid eat two mermadic kelp in a row to instantly become human!

We hope you enjoyed this guide to mermaids! You can help us make this guide even more complete! If you have any other information about mermaids not mentioned in this guide, please let us know so we can add it to the guide with credit given to you!

Special thanks to our readers, Hugandkissasim, Angie, Thomas, and Aria, for providing valuable information for this guide.