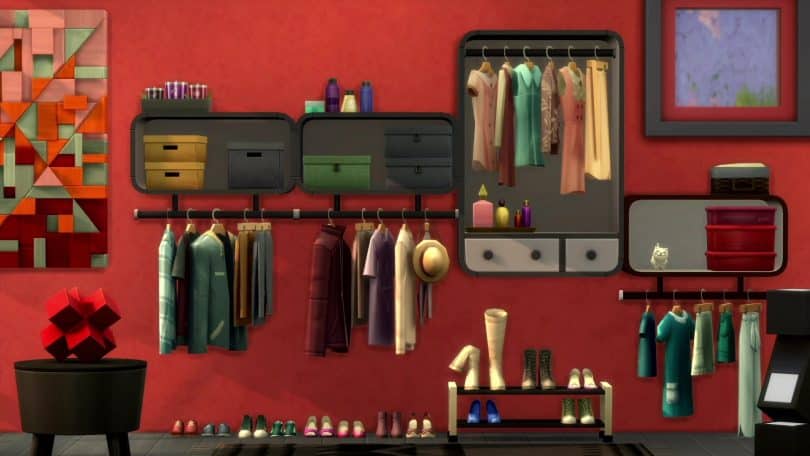 The Sims Team has officially announced the next game pack coming to the game. The Sims 4 Dream Home Decorator will have your Sims embark on an exciting new active career in interior design. Visit clients’ homes, listen to what they want, then make their dreams come true in Build/Buy! We got to see exactly what this new game pack entails in the reveal trailer today and noticed quite a few new objects that are sure to please Simmers with a passion for design! 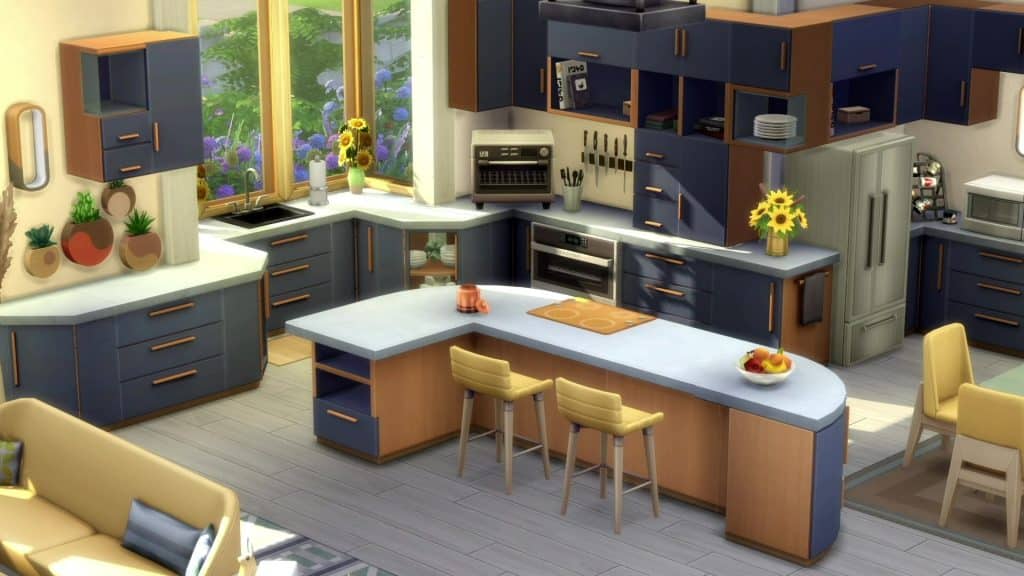 We are dearly hoping this toaster oven is not just a reskinned microwave or a decor piece but our hopes remain high that this is a functional new appliance considering it slots into a corner counter the same way small appliances do and there is also a microwave pictured in this screenshot. Having two microwaves in your kitchen would be redundant, right? 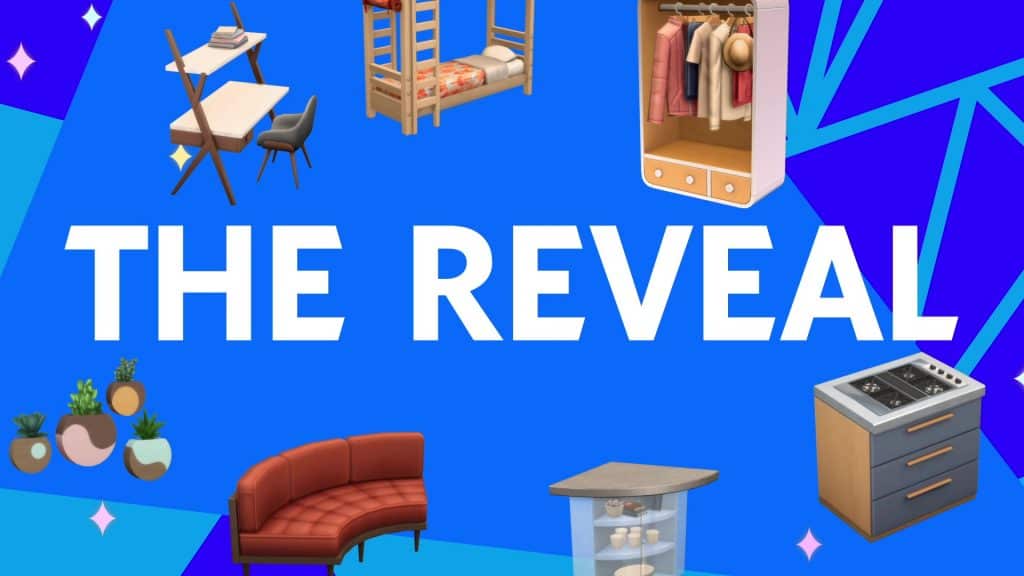 You can spot the counter cooktop in the first screenshot but we get a much better look at it here. Counter cooktops are something players have been asking for for a long time but up until now, only custom content creators have made it happen. It’s exciting to see these come to the official game for both console and PC players to enjoy. We just hope the cooktop is a separate piece that can be placed on any counter and is not attached to that specific counter. 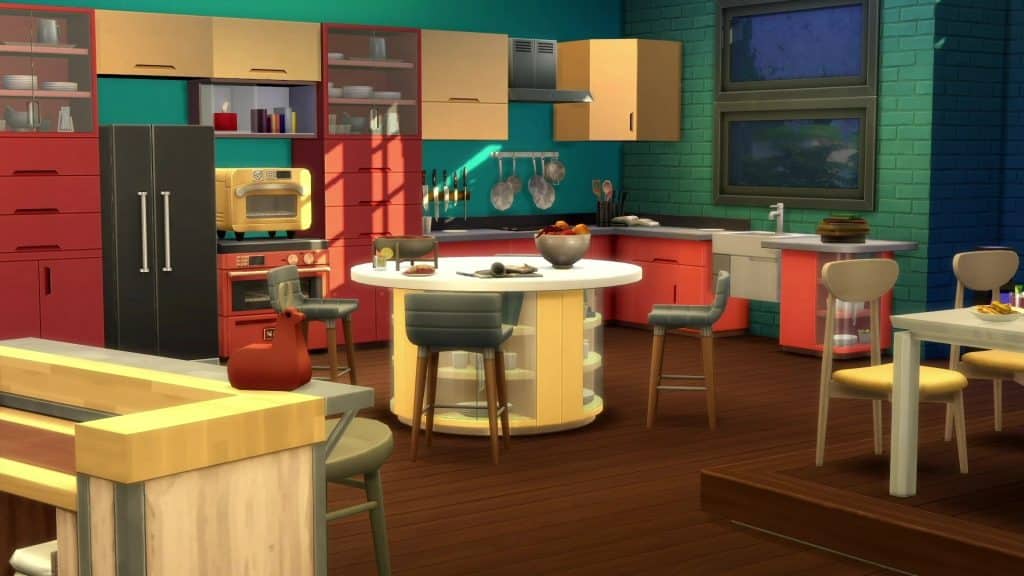 If we’re getting a stovetop-sans-oven, it only makes sense that we would also get an oven-sans-stovetop. You can see an oven slotted underneath a counter in this kitchen setup with the new toaster oven placed on top. This is going to offer players a lot more versatility in their kitchen builds and we’re excited for it! 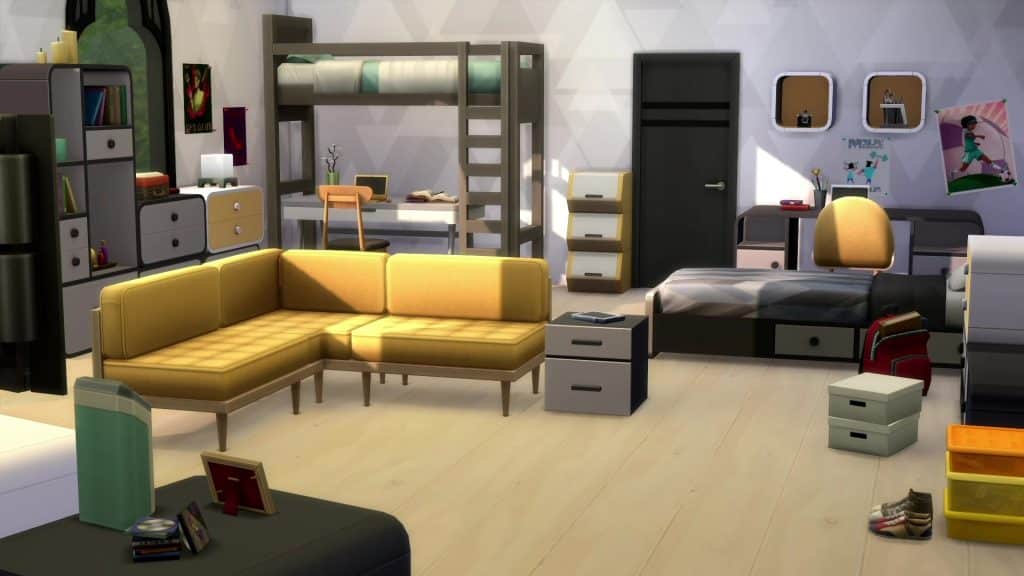 It was pretty hard to miss the new sectional seating featured in the trailer. Sectional couches have been something players have been screaming about for years and it sounds like The Sims Team has finally heard our shouts and pleas for this popular item. All we can say about it is… It’s about time! 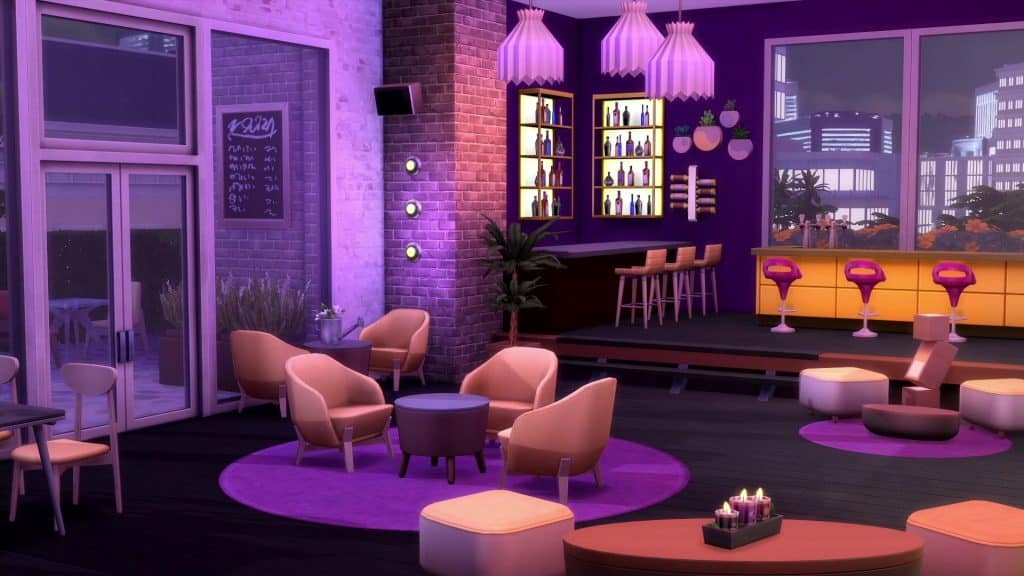 Although the trailer focused primarily on redecorating people’s homes, we did also see this lounge featured in the trailer. We’re pretty sure it’s a public venue since it’s on the karaoke bar lot in San Myshuno’s Fashion District and there’s a menu hanging on the wall out front. Maybe our interior designer Sims will be able to get jobs for commercial venues as well? 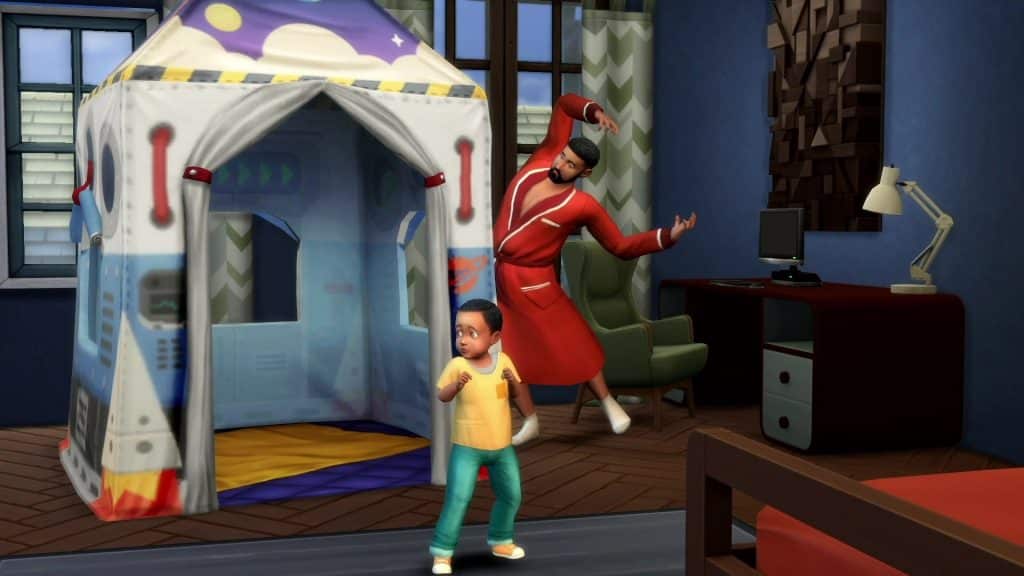 Who could fail to notice this adorable play tent?! Not us! It looks tall enough for both toddlers and children to use and we can see Bob Pancakes interacting with the tent from the outside as well, playing with his son, Iggy. Family players are sure to love having a new toy for their little ones to play with and a new way for adults to play with their kids at home. 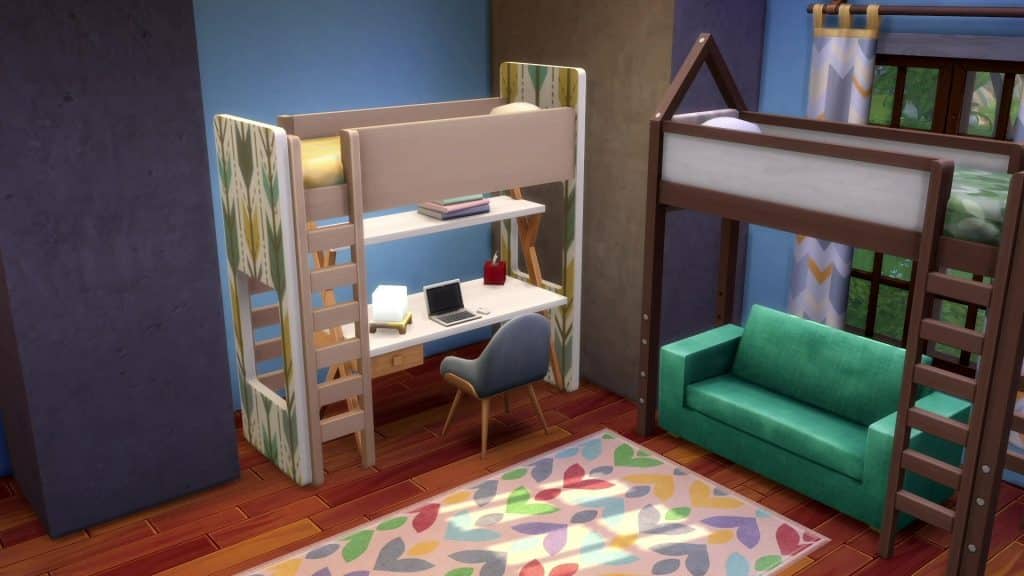 Bunk beds are a relatively new addition to the base game but it’s no surprise that new styles of bunks and lofts are being added in DLC packs. We are loving the cool pattern on the bed to the left and the charming rustic style of the bed to the right. You can never have too many bunk and loft beds. 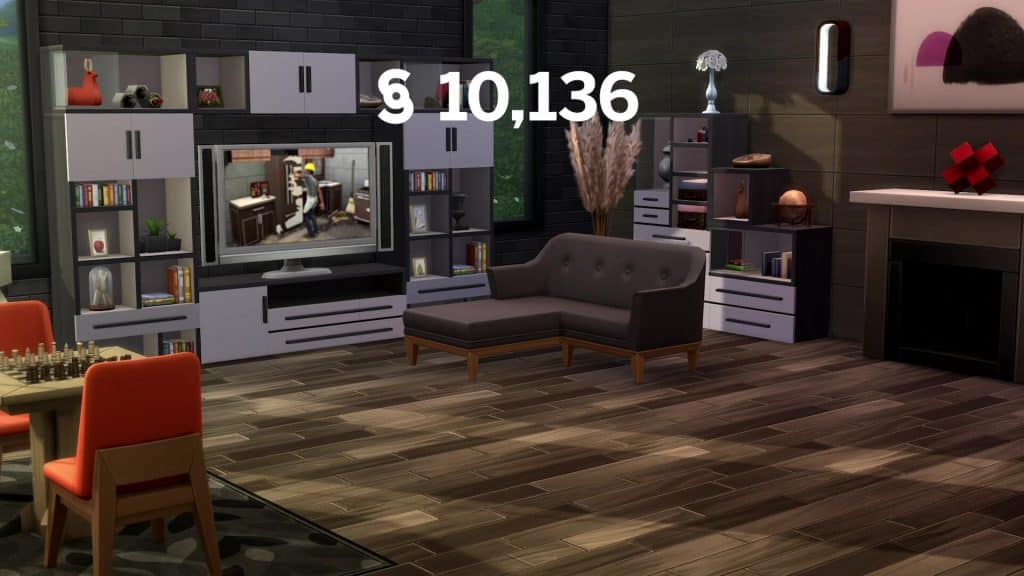 Players have been creating entertainment units using kitchen cabinets, counters, and shelving for years now but sometimes it could look a bit strange having cabinets with dishes and spices in them in the living room next to the TV. It looks like these particular shelving units have been designed with this purpose in mind, however, because these pieces of shelving seem to fit perfectly around this TV and don’t look out of place in a living room setting. 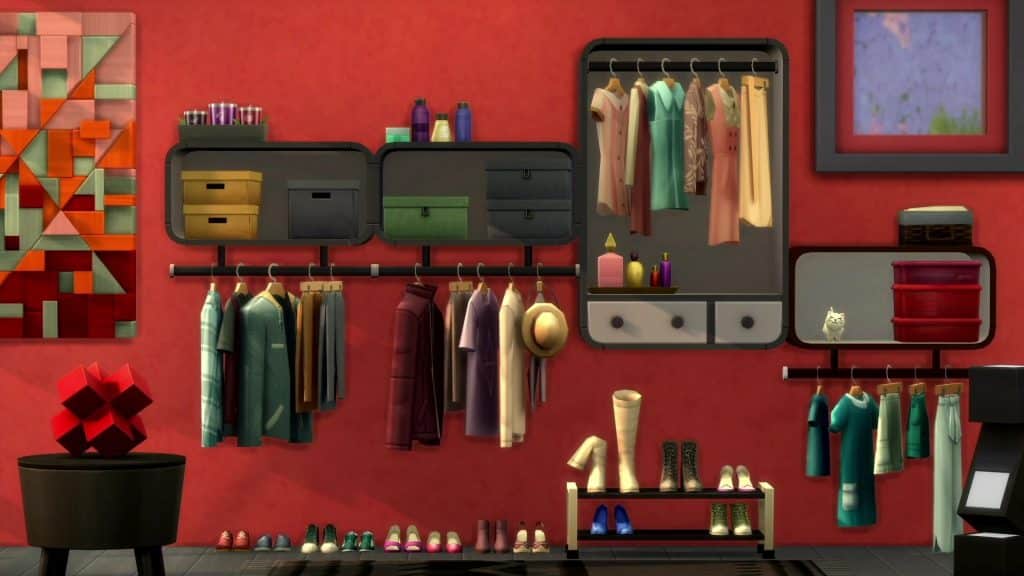 Another common house feature players have been creating for years now but always struggled with a bit was walk-in closets. Most player-created walk-in closets were purely decor and didn’t serve any in-game purpose beyond looking nice. If players wanted their walk-in closets to be functional, they had to place a dresser in the closet, which kind of defeated the purpose of having a closet. The spacious closets added in Get Together provided some functional new gameplay but didn’t offer much customization options. These new walk-in closet pieces look very versatile and will no doubt help players create the walk-in closets of their dreams more easily.

Missed the trailer? No problem! You can watch the full reveal right here!