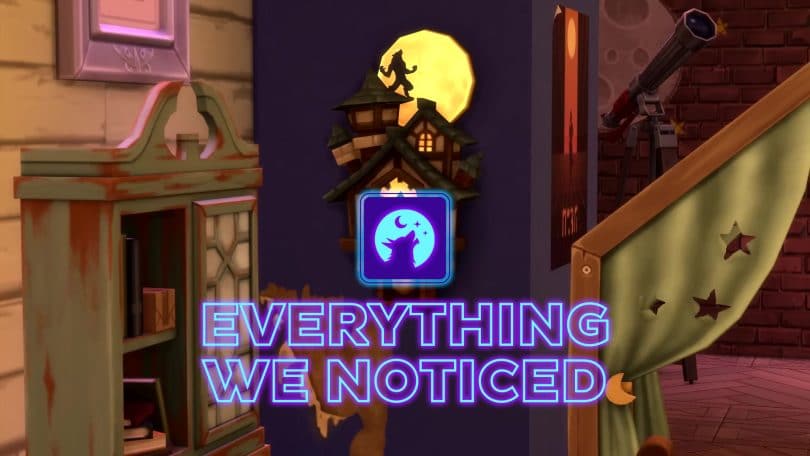 Running wild with everything we noticed in the reveal!

Werewolves are finally coming to The Sims 4! The Sims Team released the reveal trailer today showing off the new world, new CAS and Build/Buy assets, and of course, the werewolves. Like always, we’re here to dissect every last frame of the reveal trailer to break down everything we spotted that we found interesting!

There was lots to unpack in the trailer so let’s get right into it!

We spotted this tree in the background of one of the first shots which has moons and stars hanging from its branches and a mysterious opening in its trunk. Perhaps a method of quick travel in Moonwood Mill or does it lead to a secret location like the tree in Willow Creek? Only time will tell!

We have to give The Sims Team credit where credit is due; they’ve been putting a lot more effort into including younger life stages in recent packs. Snowy Escape, Cottage Living, and the Little Campers Kit all had activities for kids and toddlers to enjoy and it looks like they didn’t forget the little ones in the Werewolves pack, either, because we see a new baby bassinet, toddler bed, bunk bed and new toys for kids and toddlers. Also, did they size down that teddy bear or are we getting smaller versions of the stuffed animals? Hm.

One complaint about The Sims 4 that players have had for years is that everything is just… huge. For no reason. The observatory, the cupcake maker, the dollhouses, the stuffed animals. So many objects are just unnecessarily massive and don’t fit in most homes. Players have been asking for a small telescope for years and it looks like we’re finally getting our wish!

In the same image as the telescope, we also spot this peeling wallpaper! This could be a decal or a new type of wall covering but either way, we love the peeling wallpaper shown here. It would go great in both werewolf and vampire lairs!

Vampires came with some creepy wall decals to make homes look weathered and worn so it only makes sense that Werewolves would come with their own set of floor and wall decals. After all, werewolves are known for being destructive beasts so we’d honestly be perplexed if we couldn’t cover everything in scratch marks.

We see numerous shots of tables with plates of raw steak on them. We can only assume these are edible by werewolves. We can’t imagine they would be very tasty to non-werewolves, though. There’s also new pop cans with a wolf design on them. Maybe these drinks have special properties for werewolves?

We also spot new exercise equipment in the image above! It’s been a while since we got new variations of the exercise equipment and these new pieces of equipment are certainly unique. They’re falling apart, held together by tape, and covered in graffiti. They would make for an excellent abandoned gym… that’s been taken over by a werewolf pack.

There’ve been some subtle and not-so-subtle hints that players who own both Vampires and Werewolves will have some added gameplay involving a feud between the two. From cryptic symbols translated into vampire disses, to a scratched up portrait of Vlad on the wall, to a vampire’s face spray painted onto a punching bag in the previous image… we hope there’s a lot of hot tea to spill there!

The description for the Werewolves pack talks about werewolf, vampire, and spellcaster lore as being part of the pack so perhaps these new books shown here are new skill books? We would love to have new skills to learn.

In the same image as the books, we see a new fish! Personally, I’m a collection enthusiast so anytime I see a new collection or new additions to existing collections, I get excited. This wolf-like fish definitely looks like a new fish that can be caught in the waters of Moonwood Mill! Hopefully this means there are more new collectibles or even a whole new collection coming with this game pack.

Of course, how could we miss the new moon phases? While we’re going to miss the beautiful full moon every night in The Sims 4, the waning and waxing moons will be pretty to see, too. Maybe we’ll even have new moons for extra dark nights! That would be pretty cool.

We love that The Sims Team has started releasing new nails in almost every pack and these ones look amazing! We also caught glimpses of more wolf-like claws on the werewolf forms so hopefully those are customisable nails in CAS, too. Although this does make us wonder… will werewolves be able to go to spa in their wolf forms to get a manicure for players who have Spa Day? That would be a hilarious sight to see!

Bonfires have been in a couple different packs so far but it looks like we’re getting one designed like a junk heap with the Werewolves game pack! We like the look of this bonfire and think it fits the whole grungy werewolf theme really well.

Here we see a werewolf rocking out on a brand new guitar! We always enjoy getting new designs of base game objects that have become kind of dull-looking over the years. Maybe we’ll get some new songs to play? That might be wishful thinking but we can hope.

It was easy to miss because it only lasted for a split-second, but this werewolf appears to have one of the same custom pattern presets on their fur that pets have in CAS. Does this mean we’ll be able to paint our werewolves’ fur in CAS the same way we can paint our cats and dogs?

We caught a glimpse of grungy portable washrooms in the trailer and while the germaphobe in me is gagging, I can’t deny that they fit the vibe of the pack. They are likely a new style of the public washroom objects found around different worlds.

During the fight scene between two werewolves, we caught a moment where they were fighting in broad daylight. Does this mean werewolves can gain the ability to retain their wolf form during the day?

During the same scene, another werewolf is seen digging into the ground to escape the fight going on. The same werewolf is later seen climbing out of the dirt near the bar where other werewolves are partying. This seems to confirm that werewolves will be able to quickly travel from place to place by digging underground.

We also see two werewolves playing tug of war with a giant dog toy by the bonfire. So it looks like werewolves will have special dog-like interactions with each other, too.

While a lot of players were quick to point out that the werewolf design is basically just a regular Sim with fur and a dog head, they actually do look a little more wolf-like when they run on all fours.

At the end of the trailer, we see a pack of wolves exiting some kind of cave structure. When the camera zooms out, we can see that the cave is sitting on top of a huge cliff overlooking the whole town of Moonwood Mill! Is this a secret werewolf lair? A rabbithole? A WooHoo spot? All three? We need to know!

What else did you spot in the trailer? Let us know in the comments!