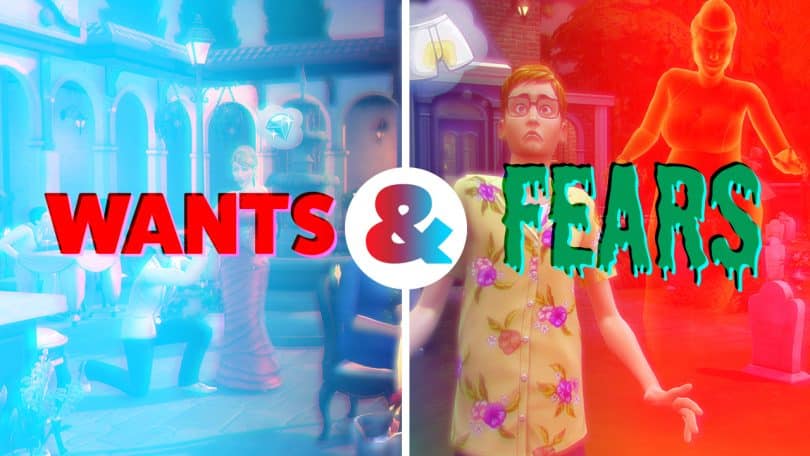 A breakdown of the new Wants and Fears system, plus every Fear, how to trigger them, and how to overcome them!

The Sims 4 got a huge content update yesterday, adding plenty of new features to the base game. One of the biggest features all Sims 4 players got for free today was a new Wants and Fears system. The Wants and Fears system is a replacement for the now-abandoned Whims system, which was for the most part, random and entirely pointless. Wants are now more in line with your Sim’s personality and Fears are developed over time through gameplay. Unlike past Sims games, Sims can overcome their Fears by facing them head-on.

So let’s get into Wants and Fears!

Sims now have a set of Wants that are much more intuitive and better based on each Sim’s unique personality. Sims can have up to three Wants at a time; one long-term Want, one short-term Want, and one reactionary Want.

When you complete a Want, your Sim is rewarded with satisfaction points to spend in the rewards store. In this respect, Wants are very similar to Whims, except Wants are a lot smarter than Whims. You won’t be rolling a lot of Wants for things that are completely unrelated to your Sim’s personality or lifestyle but that doesn’t mean you’ll never be surprised by a new Want! We noticed that our Sims would sometimes roll Wants to flirt with Sims they are merely acquaintances with; no pre-existing romantic relationship was needed to roll this Want. This is something that wouldn’t happen before and opens up new stories and gameplay for you that you might not have planned. Of course, if flirting with the mailman isn’t something you want to do, you can always ignore that Want.

Wants cannot be clicked away like Whims could, so there’s a bit of a gameplay challenge there, but don’t worry about getting stuck with the same Want forever; they can and do change on their own. You can also complete a Want to get rid of it and make room for a new one. Wants can be pinned so if your Sim rolls a Want you really want to complete but don’t have time for right now, click the pin button on it to lock it in. Pinned Wants won’t disappear until you complete them. Don’t worry if you can’t complete a Want; the only penalty we saw for not fulfilling Wants is developing a Fear of Unfulfilled Dreams, which can be overcome!

That brings us to Fears…

While Wants are a big improvement over Whims, Fears are brand new to The Sims 4 and are better than Fears from previous The Sims titles. Those who remember Fears from The Sims 2 will know that Sims had a set of Fears alongside a set of Wants but there wasn’t a whole lot you could do about your Sim’s Fears except avoid them.

Now, Sims don’t start out with Fears. Instead, they develop them over time through lived experiences. If your Sim experiences a house fire, they may develop a fear of fire. Sims in relationships may develop a fear of being cheated on. Fears display as traits in your Sim’s info panel. Hovering over that trait will explain the Fear in more detail and offer a tip on how your Sim might be able to overcome it.

Some Sims are more or less likely to develop certain Fears than others. For example, Sims with the Jealous, Paranoid, and Commitment Issues traits will be more likely to develop the Fear of Being Cheated On. Sims who have the Gloomy and Brave traits, or Sims who are vampires will not develop a Fear of the Dark.

If your Sim currently has a Fear, you may see a fourth “Want” pop up next to their other three Wants. This one will have a jagged outline. This means that your Sim wants to do something to try and get over their fear. Hover over it for details on how your Sim can try to face their Fear and ultimately overcome it.

Our Sim was afraid of being cheated on and wanted to Discuss Relationship Fears with her boyfriend to try and ease her anxieties about him cheating. We decided to be a little mean, however, and chose to have her walk in on him WooHooing with someone else, instead. Because her worst fear actually came true, she was slapped with a very powerful Angry moodlet. Since she had already witnessed him cheating on her and was furious with him, when we tried to have her overcome the Fear by Discussing Relationship Fears, the conversation didn’t go well and they both got Angry moodlets.

However, if your Sims do successfully confront what they’re afraid of, they will no longer have that Fear. Confronting your Fears is a good way to get rid of a particularly annoying Fear that’s getting on your nerves in gameplay.

Thanks to our junior writer, @thatsimslady digging through the tuning files for us, we have a list of every new Fear, how to obtain it, and how to overcome it!

Keep in mind that the listed triggers are only potential triggers. There’s a chance your Sim may develop a fear after experiencing a fear trigger but there’s a chance they might not. Other factors like your Sim’s traits will influence how likely your Sims are to gain certain Fears.

All Fears are for the base game but there will be new Fears related to High School Years that will come with the expansion.

Hate this new feature for whatever reason? No problem. Just disable them in the Game Options under the Gameplay tab!