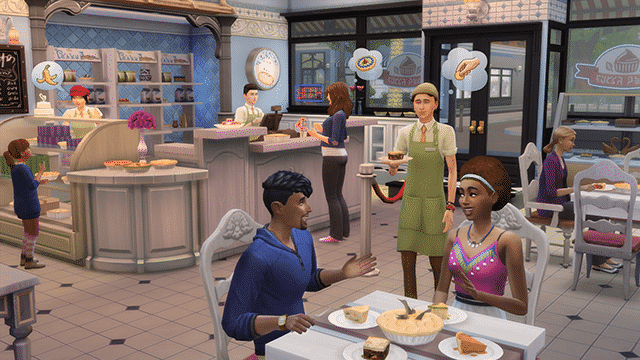 Last week we looked in on some lovestruck scientists running cloning experiments in a science lab. This week, we’re following an up-and-coming entrepreneur hoping to make her mark as a retail business owner in The Sims 4 Get to Work.

Sarah’s Bakery was failing. Badly. She’s was losing Simoleons on it every day, she was overworked, and she hadn’t found the time to leave her store in days. But today was the day she would turn things around.

She woke up bright and early in the small room she had built above her bakery. It was pretty basic – a bed, a bathroom, and a small kitchen – but it let her take care of immediate needs when she was too tired to head home after a long day of work. She would eventually have to go to her real house to pay her bills, but this little home away from home lets her start her day earlier (and end it later).

She made a few pies and brought them downstairs, putting them on shelves around the room. She looked around her shop, letting it all soak in. Her bakery was awful. It wasn’t cute or fun, or anything a bakery is supposed to be. If she wanted to succeed, she needed to expand and get creative!

Though her business was failing, she had saved up just enough Simoleons to make some changes. She grew her shop downward, adding a basement to her building and filling it with the fixings of a proper bakery: tables, ovens, and – of course – a cupcake machine, which she used to make a variety of awesome sweet and savory creations. Her garden let her include some fresh ingredients too – things the Sims coming in wouldn’t be able to resist. By the time she was done, she’d become better at baking, and learned a few new cool recipes.

Now she needed to change the look of her bakery to make it more appealing to potential customers. So she made another change, splitting her store down the middle. One side was painted pink, with cute decorations and all of the sweet baked goods she could create. On the other, things became darker and more savory, with Crab Cakes, Artisanal Herb Bread, and other flavorful goods. She stood in the middle of her larger, more impressive shop. This was good. This was very good! But now that her shop looked great, and was filled with great stuff, Sarah knew she’d need some help.

She looked through a list of potential hires. A few were great at sales, others better at cleaning and restocking, and some were more hardworking. She hired a cheerful Sim named Melissa and gave her a brand new uniform. Everyone who came in was met with a smile, and left with a handful of Sarah’s baked goods. As the day went on, Melissa got faster and faster (and made Sarah more and more money). Sarah’s new baked goods were flying off the shelves thanks to Melissa. Her investment was well worth it! Melissa was so good that Sarah needed to hit the floor herself, restocking her pies and cupcakes as Melissa rung people up on her tablet. 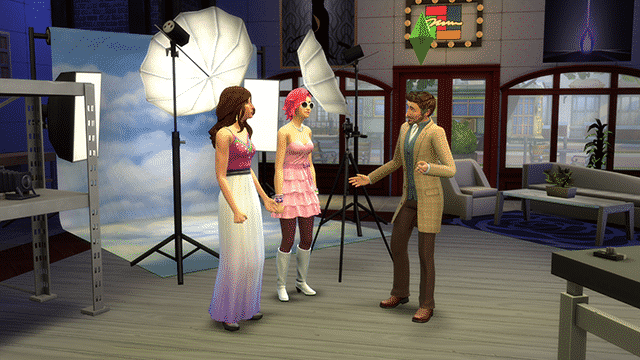 At the end of the day she walked over to the cash register and looked at her earnings. She’d made enough to give Melissa a well-deserved raise – which she knew would keep her happy – and her business was successful enough to upgrade. A big, neon sign was placed above the door: talk about a perk!

What a difference a day makes. When she woke up she was struggling to make ends meet in a failing bakery, and now her shop was the talk of the town. Who knows what tomorrow might bring. She could hire another employee, add another level (or two) to her store. Maybe she would open a different type of store entirely – one that sells pictures of wooden figures. She wasn’t sure, but she was excited to find out!

This April, your Sims will rule the workplace in The Sims 4 Get to Work Expansion Pack. You will control your Sims’ every action as they tackle three active careers, whether it’s saving lives as a daring doctor, solving crimes as a fearless detective, or creating inventions as a mad scientist. You will also be able to put your Sims’ entrepreneurial ambitions to the test as you create and customize unique retail businesses. Plus, there are new venues, more skills to learn, and the chance to befriend some aliens!