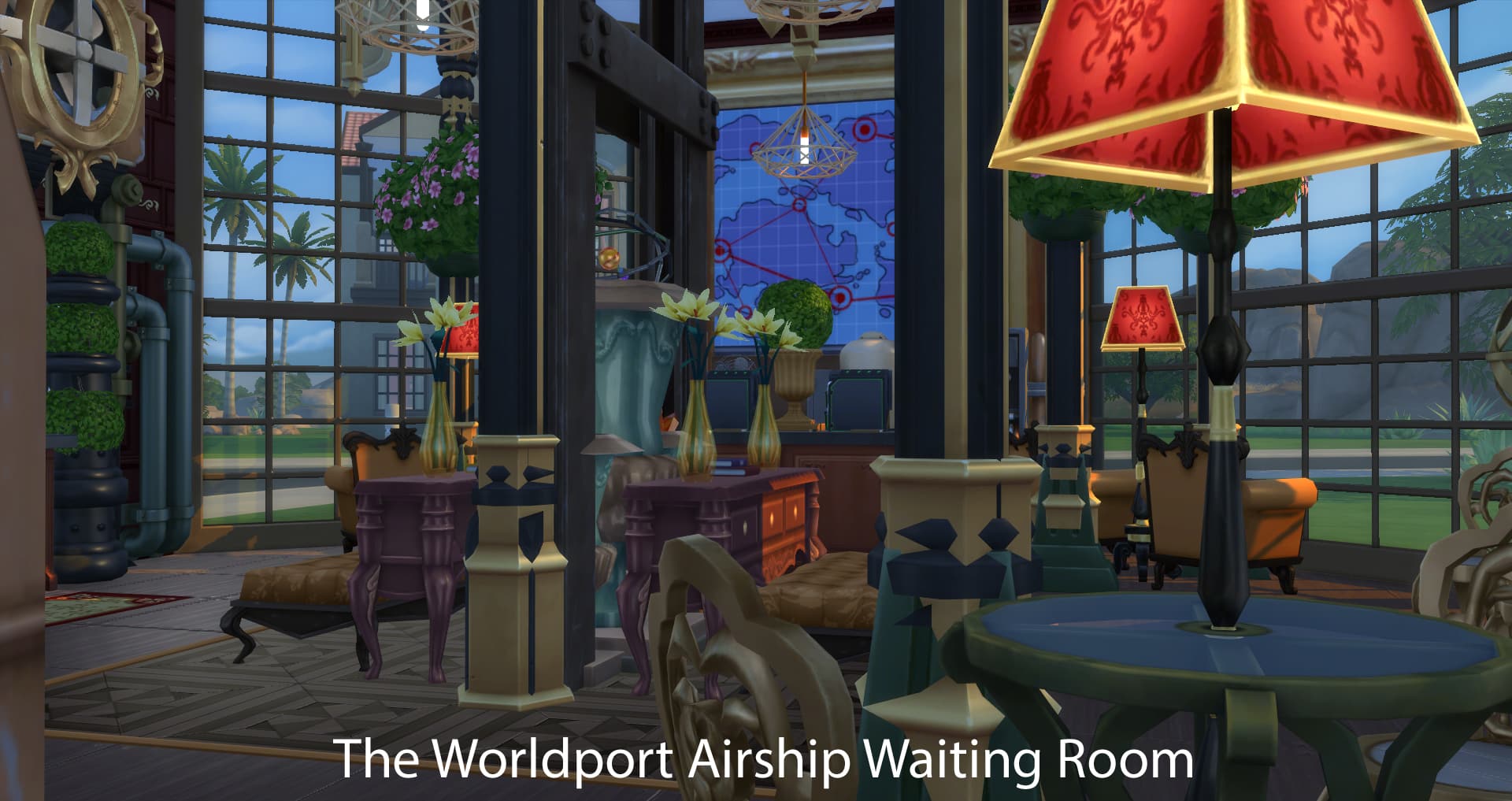 Hi, I’m Jason Sterling. I see Steampunk as a mixture of high technology and steam power with a Victorian decor. This style is one of my favorite and the Sims 4 catalog is easy to use to create it. This is the first of a series of three articles to help you on the road to the future, firmly rooted in the past.

I am going to use the two examples below in all three articles. The RM Cascadian Airship and the Worldport Airship Waiting Room were conceived as Steampunk designs from the start. I’ll highlight some key ideas from both. As well I’ll showcase some tips not incorporated into these builds for inspiration. I hope this will provide you with some ideas for your Sims. 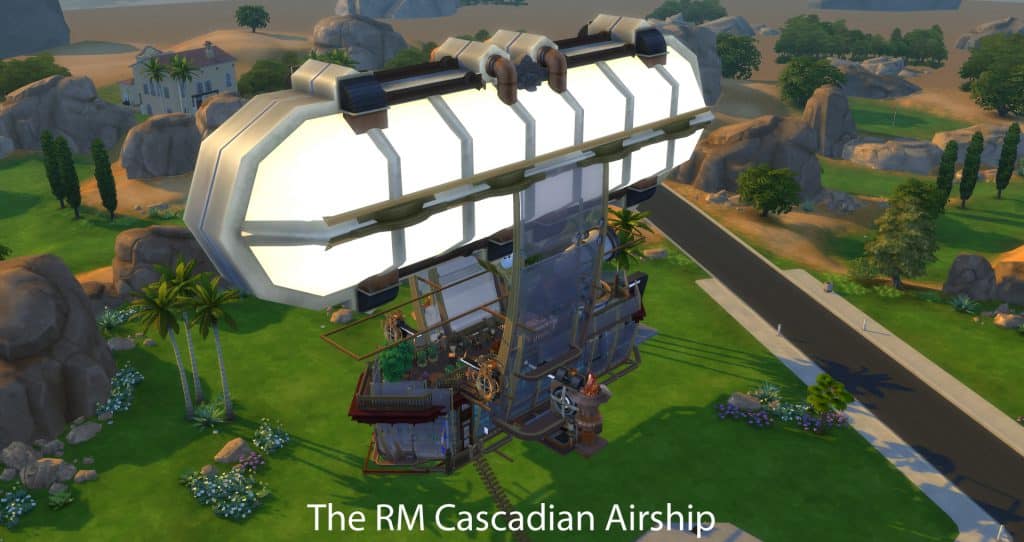 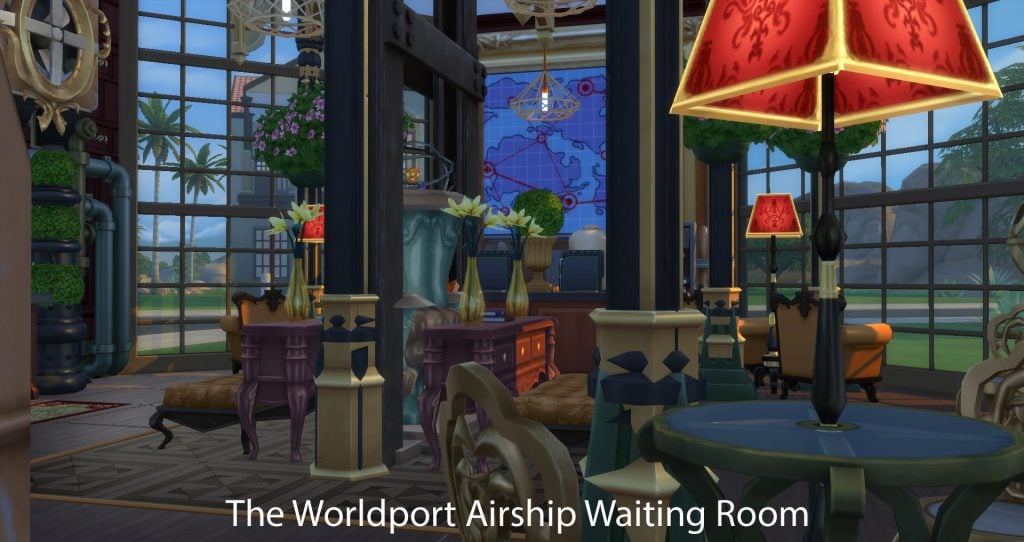 From my point of view Steampunk is a retrofitted world. I use three essential cheats to create that look and I have listed these cheats below. Press the “CTRL SHIFT C” buttons at the same time while in game. The cheat box will open at the top left of the screen. You can then enter any of the cheats you wish to use in the box. Press the “ESC” button to close the cheat entry box when you are done.

Steampunk tech is often covered in Victorian cosmetic detail. I have three examples below as illustration and tutorial.

I have placed the “Tactical Map” in the Worldport to act as a destination board for airship travel. (#1) Then I’ve used an enlarged “Portrait of the Lady Mimsy” to frame the map. Along with the “Unfulfilled Wall Sign” which is hiding the lower portion of the painting from view. (#2) Then I chose the “Compound Clearing Industrial Pipe”, the “Galvanized  Industrial Wall Pipe” and the “Large Energy Emitting Transistor” to provide our steampunk mechanical and power source for the map. (#3) The area is finished out with “Modern Victorian Counters”. Atop these is the “Arctic Kiss Fan”. (#4) 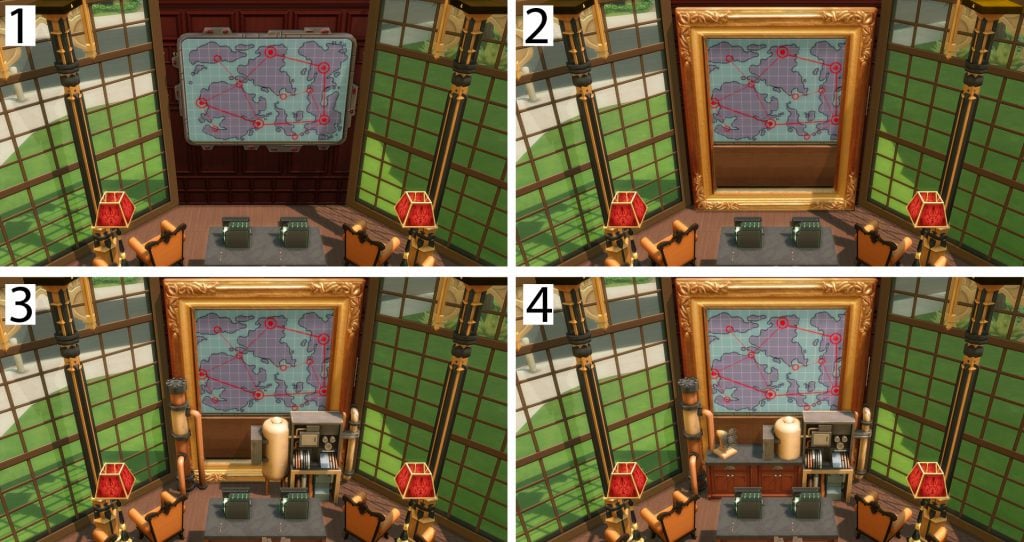 We have the Transistor again here to act as a control board for the telescope. While the telescope is acting as the navigational aid for the airship. I’ve softened the device by using “Portrait of a Marriage” to frame it in carved wood. Further I added the “Mega Wall Lanterns” as a source of Victorianesq light. The “Antique Book Stand” acts as a manual for the controls. Lastly, I’ve added the “Gate of Wonders” for access and for additional Victorian flare. 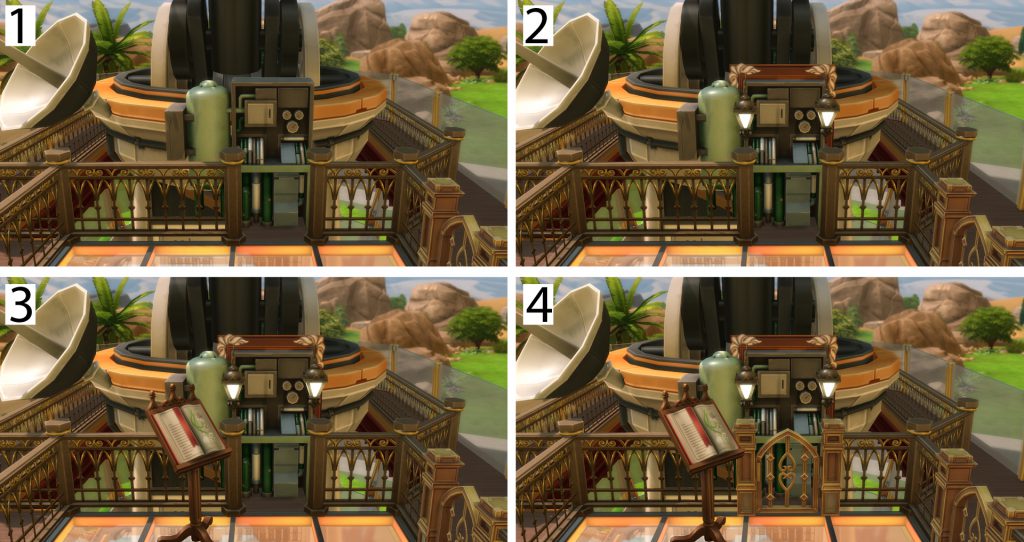 This last example I’ll include for inspiration. It’s not perfect. It can also be tricky aligning the “Invisiview Flat Screen HDTV” using MOO. However, I still use this technique occasionally.

I start with the “Etude in Blue Painting” placed as shown. (#1) It fits the television best. You can also use “Viva More of La Landscape” shown as an example on the ground. I like the carved wood frame better in fact but it does not fit as precisely with the television.

After I hang the painting I remove the section of wall behind it. (#2) Next I raise the television using the “9” key to the same height as the painting. While holding it, I slide it back until it intersects the frame and covers the art. (#3) Lastly, I place Holder Upper Pillars to frame out the wall break as a retro-fitted opening between rooms. (#4) I like the use of these pillars here better than other choices as there is a bit of overlap of the columns onto the screen that look like brackets screwed into place to hold the television in place. To me it fits with the retro-fitted look in this case. I’ll often duplicate this on the other side of the opening.

I hope you’ve enjoyed this first article. Please join me tomorrow and read part two in this series: Layering to Create Detail

You can see the RM Cascadian Airship in action during my live Twitch feeds on channel: JasonAnthonySterling and you can follow me on Twitter @JasonSterling70. Both the builds shown here are available on the Sims 4 Gallery.