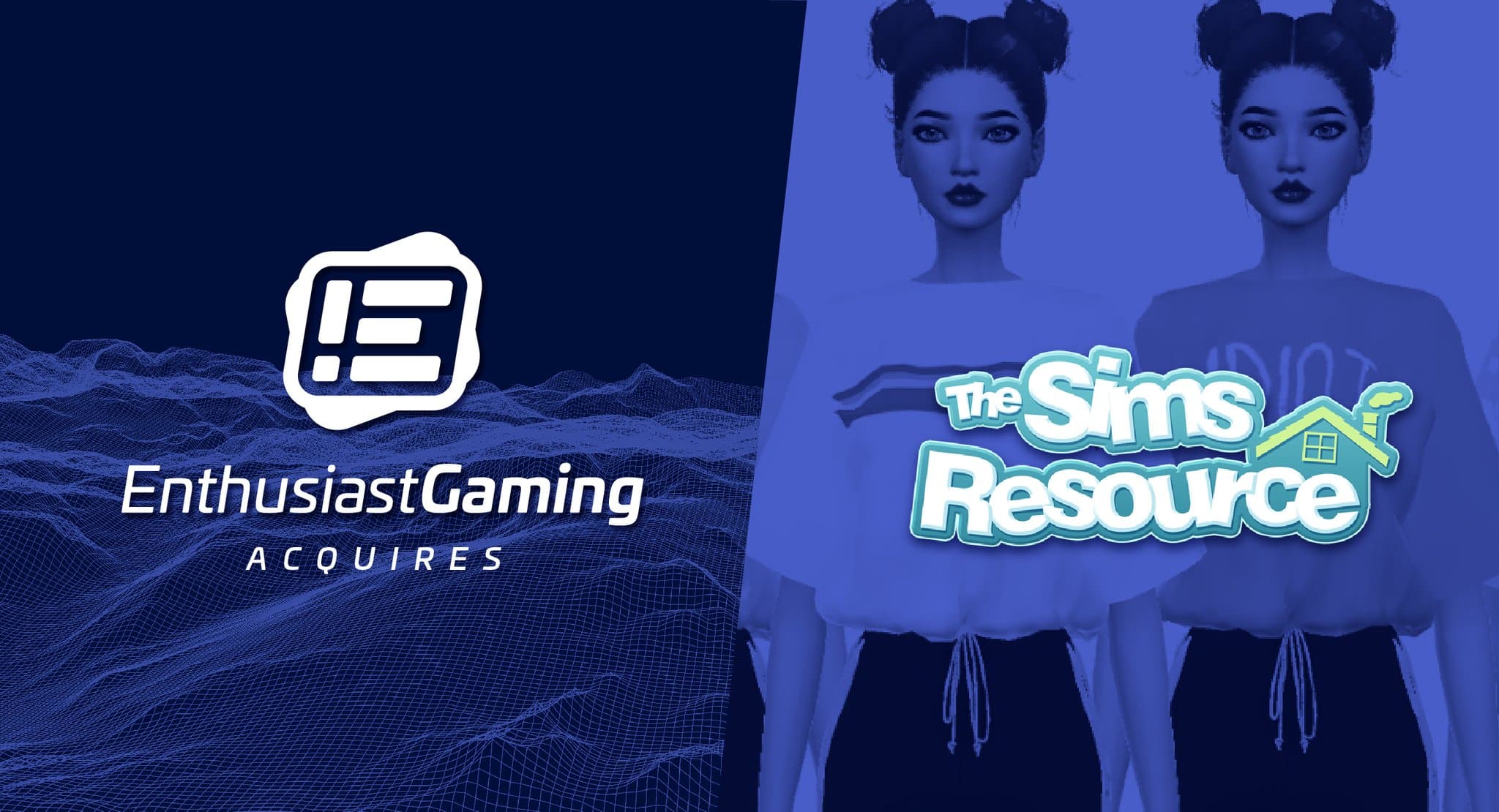 Enthusiast Gaming, an online community website that focuses toward gamers and connecting multiple large scale gaming websites has announced on January 7th, 2019 that they’ll be acquiring The Sims Resource for 20 Million USD.

In case you don’t know what The Sims Resource is – it’s one of the most popular Sims Websites that host custom content for all The Sims Games – from The Sims 1 to The Sims 4. The acquisition won’t affect The Sims Resource nor the content uploaded to it at the moment and we’re hoping it’ll stay that way.

Enthusiast Gaming has issued a press release about this acquisition and what it means for the future. Check it out:

TORONTO, ONTARIO, January 7, 2019– Enthusiast Gaming Holdings Inc. (“Enthusiast” or the “Company”) (TSXV: EGLX), is pleased to announce that it has, through a wholly-owned subsidiary, signed a definitive agreement on January 3, 2019 (the “Agreement“) for the Company to acquire 100% of the assets of The Sims Resource (“TSR”) from Generatorhallen AB and IBIBI HB (the “Vendors”) on an arm’s length basis for US$18 million in cash and US$2 million in stock for an aggregate purchase price of US$20 million (the “Purchase Price“).  Thirty percent (30%) of the Purchase Price is payable on closing and the balance payable by the first anniversary date of closing, subject to certain customary adjustments (the “Transaction“). Completion of the Transaction is subject to satisfaction of a number of customary conditions, including the approval of the TSX Venture Exchange and is expected to close prior to February 15, 2019.

Established in 1999, TSR (www.thesimsresource.com) has grown to become the world’s largest female video gaming content and community destination online.[1]The website offers custom content built around the popular Sims™ video game franchise, which can be downloaded by users to alter and/or expand gameplay. Published by Electronic Arts, The Sims™ franchise has sold nearly 200 million copies worldwide and is widely considered one of the best-selling video games series of all time.

“The Sims Resource is one of the largest video game communities, ranking in the top 5 independent sites in total views in the US, Canada and the UK.  It currently generates more than 10% of the total views of Twitch.com, the largest video game website, which was acquired by Amazon in 2014 for approximately US$1 billion,” said Menashe Kestenbaum, CEO of Enthusiast Gaming (Source: Comscore Media MetrixMulti-Platform/®, Games – Gaming Information, Total Views, November 2018, U.S., Canada, U.K.). “Further, with the rapidly growing female video game segment, TSR provides us with immediate reach into this valuable audience.”

“We see three key growth opportunities associated with this acquisition,” Kestenbaum continued.  “Initially we intend to drive significant organic growth in advertising revenue via direct sales, an area of strategic importance to Enthusiast in recent months. Further, we now have an opportunity to monetize with advertisers seeking a large female video game audience. Finally, TSR’s subscription model has the potential to add considerable revenue across our entire portfolio.”

The acquisition of TSR is the largest acquisition to date for Enthusiast and follows the successful completion of seven strategic acquisitions in 2018. The Company anticipates that it will need to secure financing in order to meet the Deferred Payment.The Company expects to continue to grow through a combination of organic growth and acquisition utilizing its balance sheet as well as being opportunistic with respect to additional equity and/or debt financing to execute on its defined growth strategy.

Founded in 2014, Enthusiast is the fastest-growing online community of video gamers. Through the Company’s unique acquisition strategy, it has a platform of over 80 owned and affiliated websites and currently reaches over 75 million monthly visitors with its unique and curated content. Enthusiast also owns and operates Canada’s largest gaming expo, Enthusiast Gaming Live Expo, EGLX, (www.eglx.ca). Over 30,000 people attended EGLX in October 2018. For more information on the Company, visit www.enthusiastgaming.com.

[2]Adjusted EBITDA as used by the Company means earnings before interest and financing costs (net of interest income), income taxes, depreciation and amortization, stock-based compensation, restructuring and other non-recurring costs, and non-controlling interests. Adjusted EBITDA is a non-IFRS measure. Enthusiast believes this non-IFRS financial measure provides useful information to both management and investors in measuring financial performance, the ability to fund future working capital needs, to service outstanding debt, and to fund future capital expenditures. This measure does not have a standard meaning prescribed by IFRS and therefore may not be comparable to similarly titled measurers presented by other publicly traded companies and should not be construed as an alternative to other financial measures determined in accordance with IFRS.