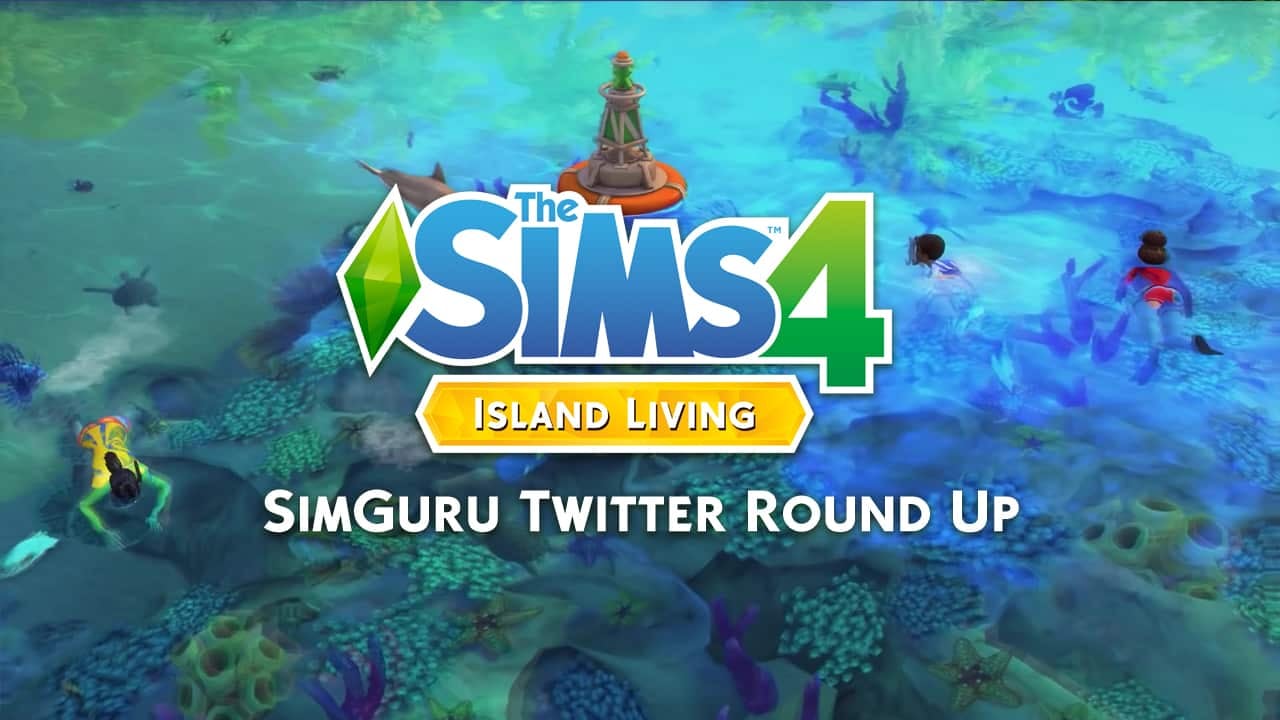 With the embargo now lifted on the content captured by EA Game Changers at EA PLAY over the weekend, some of the SimGurus has taken to Twitter to share some more details about what is to come as well as teasing us with screenshots and gifs ahead of The Sims 4 Island Living’s release.

Here’s a roundup of some of the latest Tweets from the SimGurus, starting with SimGuruMorgan.

SimGuruMorgan gave us some more information in regards to how custom content works with sunbathing and tan lines.  It is possible for custom content to work with the new feature providing that it is set up correctly.

You can read a more over on The Sims Forum where SimGuruMorgan goes into more detail. You can find the forum post here.

Hi custom content creators! As you might have noticed, in Island Living sunbathing supports tan lines from whatever clothes your Sims are wearing. Tan lines will work with your custom content as well (so long as you set it up your alpha channels properly).

SimGuruMorgan also gave us a sneak peek at some bears turning up at a clothing optional bar in Sulani.

Been dying to share this picture. Bears keep showing up to my Clothing optional bar, and all of the people are like “Why are there bears here?!” SO GREAT. @tazreentasnim pic.twitter.com/1B0YNswG5T

Note: Clothing Optional is a new base game lot trait that is coming in the patch for The Sims 4 Island Living.

In response to Cinderellimouse’s Tweet about the meteors and the island’s volcano, SimGuruMorgan revealed that the Volcanic Activity trait can be applied to any lot. Combing it with other lot traits can and would cause chaos for the Sims that live there.

SimGuruGeorge, however, has been teasing us with some gifs of the beautiful world of Sulani.

What a relaxing view. This really is a gorgeous world. #TS4IslandLiving

Any interest in seeing more calming gifs like this? pic.twitter.com/LlRHfUeEgb

It’s the morning and the start of a great day, so let’s post a sunset gif.#TS4IslandLiving pic.twitter.com/eEfRFvfetQ

SimGuruFrost teased us a few days ago with a gif of an adorable toddler having fun playing in the water.

SimGuruNinja, on the other hand, has shared a picture of his Sim playing with a seashell.

And the waiting game for the new pack officially begins! pic.twitter.com/ewVuQjxwpd

SimGuruNinja also teased that Island Living and Get Together will be getting a new mermaids club filter by sharing a screenshot of the Merfolk Club.

My Merfolk club!
(Island Living + Get Together) pic.twitter.com/4oz5A4vJlM

We also got a sneaky look at how Mermaids can work with The Sims 4 Vampires Game Pack and honestly we are just a little bit scared right now!

“Mermaids are so beautiful and peaceful,” they tell me.

SimGuruChowder gave us an insight into some of the new sealife we will see in The Sims 4 Island Living other than just Dolphins.

Yup! We have quite a few new tropical ocean fish to catch like the Mahi Mahi and Celestial Grouper. Out in the wild (but not catchable) you may find some sea turtles, jellyfish, sharks, and dolphins!

But what else have we found out from the SimGurus?

Of course in the true spirit of any upcoming pack, you’ll notice that a lot of the SimGurus have updated their profile pictures and Twitter names with a tropical Island vibe too!

Don’t forget to let us know what you are most excited for in the upcoming The Sims 4 Island Living expansion pack.