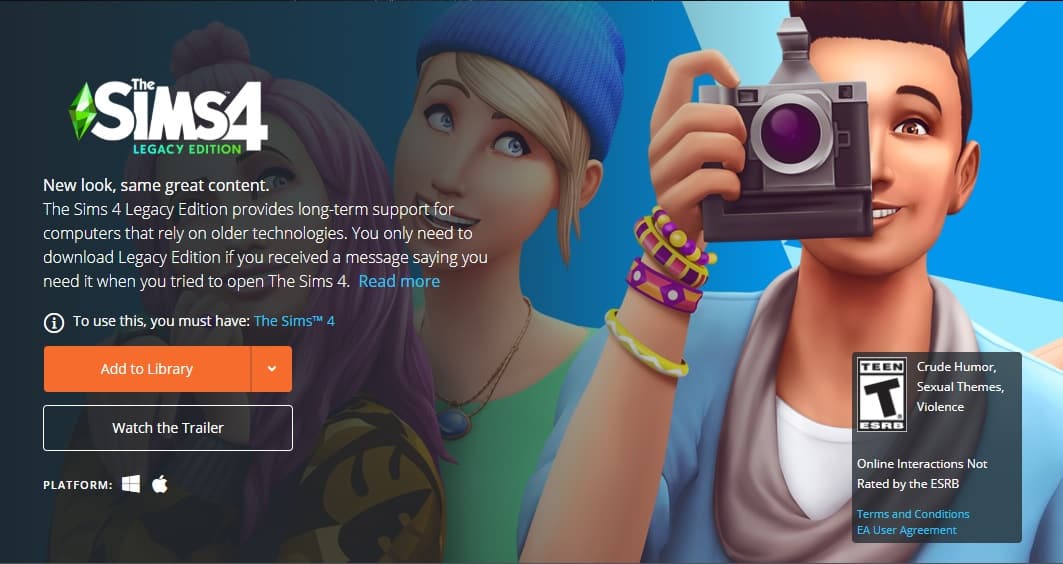 EA announced recently that they will be upgrading the minimum system requirements for The Sims 4 franchise, and users with Windows 32-bit operating systems and non-metal MAC OS will no longer be able to play future games. In a detailed post published on EA’s Answers HQ, Community Manager EA_Mai gave a detailed explanation of what the Legacy Edition is and which players should install it going forward.

In short, the Legacy Edition is a version of the base game that works with older computer technologies. You do not need to download and install it via Origin unless you turn on The Sims 4 and receive a message telling you to do so. 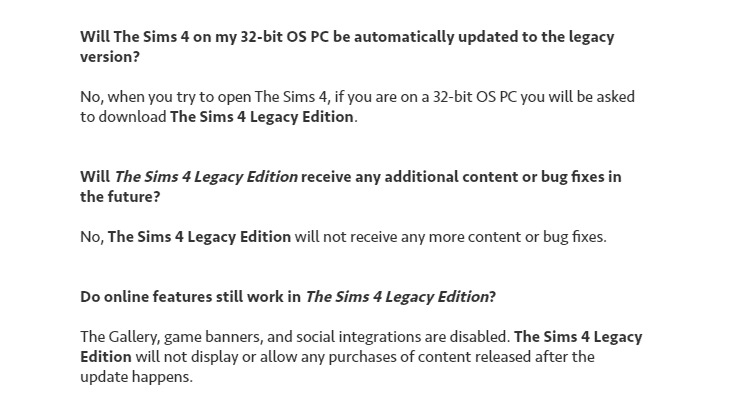 All previous expansion packs before University will work, but online features, including The Gallery, will no longer be available. For small children or ultra-casual players, this may not be a problem, but many others may now struggle to play The Sims without a machine that’s equipped to handle it.

All computers have an operating system, and Windows comes in two versions: 32-bit and 64-bit. In short, these terms refer to how much data a computer can process at any given moment. A 64-bit processor processes over four billion times more memory than a 32-bit processor, according to Digital Trends.

A 64-bit processor can work with more RAM, which stands for “Random-access memory” and determines how much data a computer can process while it’s in use. When you play video games and don’t have enough RAM, they’re likely to lag, glitch out or even be totally unplayable.

Most computers have 64-bit processors nowadays, but laptops and PCs made before 2015 may still have 32-bit systems. In order to regain access to The Sims 4‘s online features and play Discover University and future packs, you’ll have to buy a 64-bit system.

All Previous Packs Still Work With The Sims 4 Legacy Edition

EA_Mai confirmed that previous Sims 4 stuff, game and expansion packs will be fully playable with the Legacy Edition of the base game. So, you haven’t lost all the money you’ve invested in the series so far if you’ve just discovered your computer is no longer supported. A small consolation, but worth noting nonetheless. 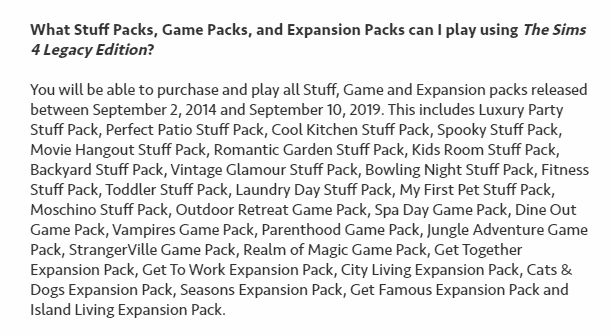 To find out what type of operating system and processor you have, you can use this free tool.

Switching to the Legacy Edition means that The Sims team wants to advance the series; not only are they ensuring that the game runs on the latest, mainstream technology, but they may also be hoping to expand future packs’ contents, which would require greater processing power to run efficiently.

The Sims 4 Legacy Edition is available for free on Origin for any player who has already purchased The Sims 4 base game.

Lunasysims has been playing The Sims for 15 years, and she has no plans on stopping! She loves finding creative ways to use The Sims to tell stories and bring interesting characters to life. Some of her favorite games include Animal Crossing, Cooking Mama, Mario Kart and the Mass Effect trilogy. When she's not Simming, you can find her writing one of her many book ideas and finishing her degree in Psychology.