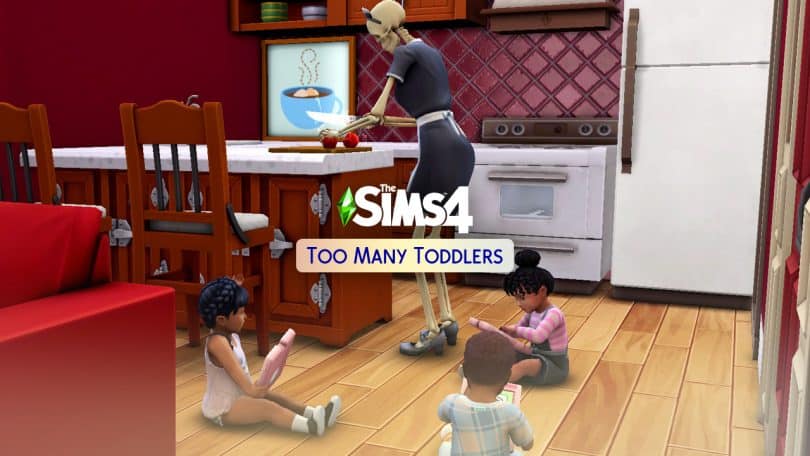 Yesterday, The Sims 4 added a new feature called Scenarios to the game; challenge-style goals for players to work towards. Today, a new scenario has been added to the game. The Too Many Toddlers scenario will only run for a limited time. It will be available for two weeks until November 17th, 2021 so if you want to play the scenario, you will have to start it before then. 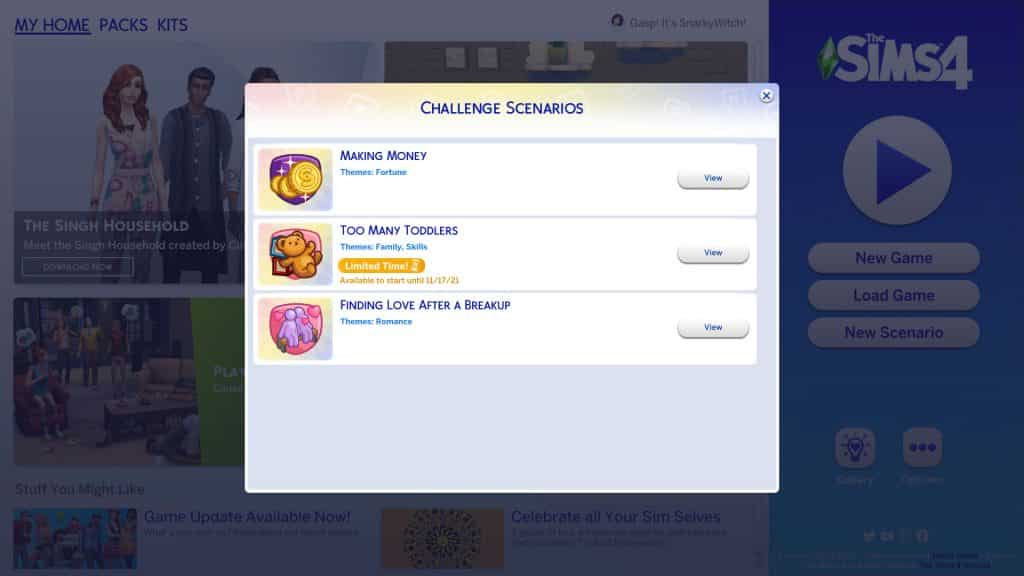 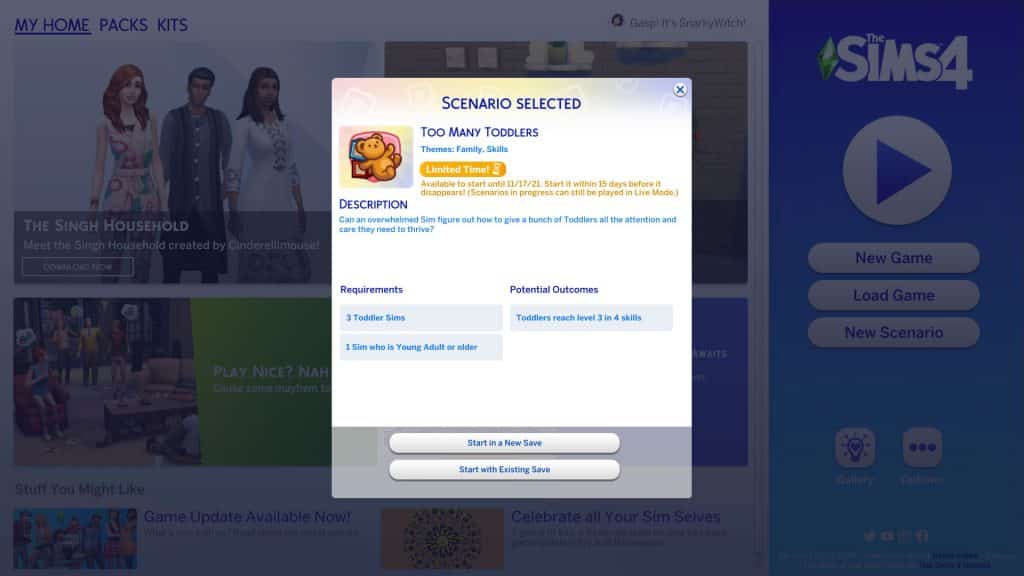 I decided to use Bonehilda as my young adult Sim for entertainment value and just randomised three toddlers quickly in CAS. I then plopped them down into a starter home I built a while back and I was ready to start the scenario. If you’d like this house, it’s called Daisy Hovel and it’s in my Gallery under the ID SnarkyWitch. Bonehilda is also available to download. 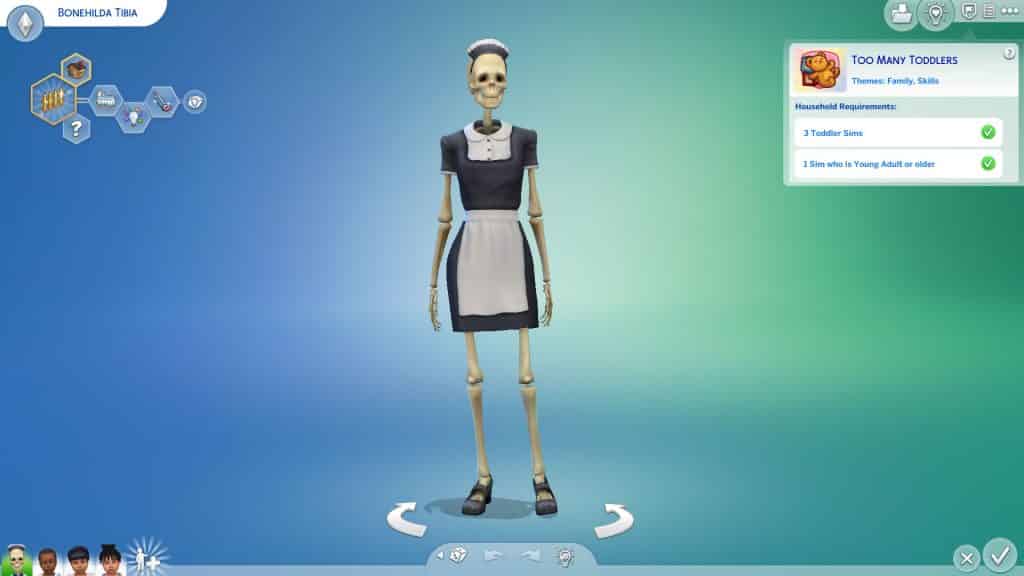 I made a few minor edits to the house to accommodate three toddlers and got to work. I had a feeling when I started this scenario that it was going to be rather uneventful and dull. Unfortunately, I was right. I loved the potential drama of the previous two scenarios but this one was just skill grinding and wasn’t even challenging at all. Anyone who has played the 100 Baby Challenge or the Seven Toddler Challenge will not find any kind of challenge here. Three toddlers is laughably easy to handle. 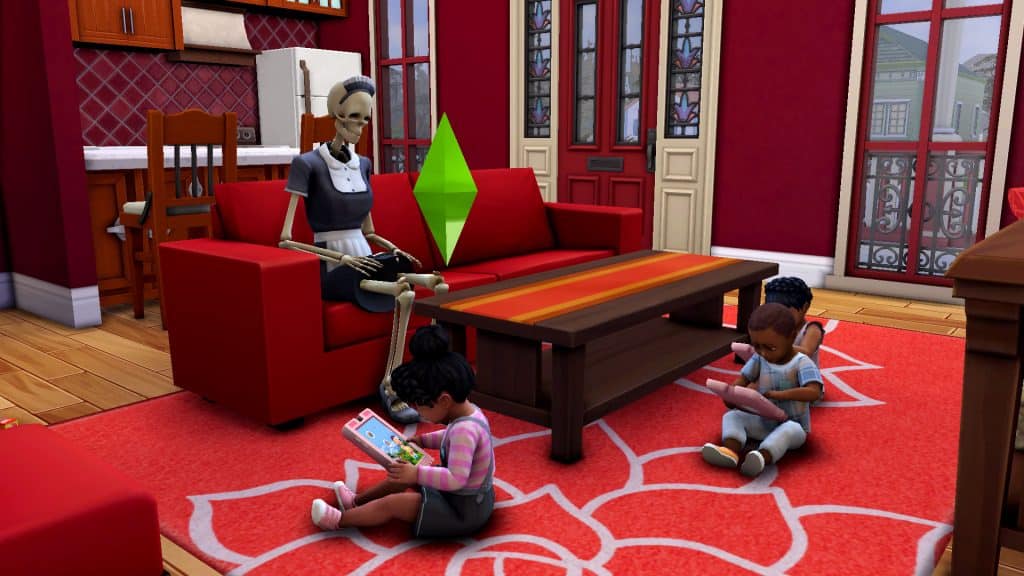 Since Imagination and Thinking are the two skills that can only be learned with an adult or with the tablet before level 2, all the toddlers got their tablets out and started playing the Imagination and Thinking skill-building games. Bonehilda didn’t really have a lot to do. The toddlers were busy skill grinding, after all. Bonehilda’s only duties regarding the toddlers were diaper changing, cooking, and bathing. The rest of the time, they were busy building skills on their own. Since I’m a 100 Baby Challenge veteran (and the original author of The Sims 4 version of the challenge), I know better than to waste my time with high chairs. The toddlers simply grabbed their own helping of whatever Bonehilda made for them and ate it wherever they wanted. 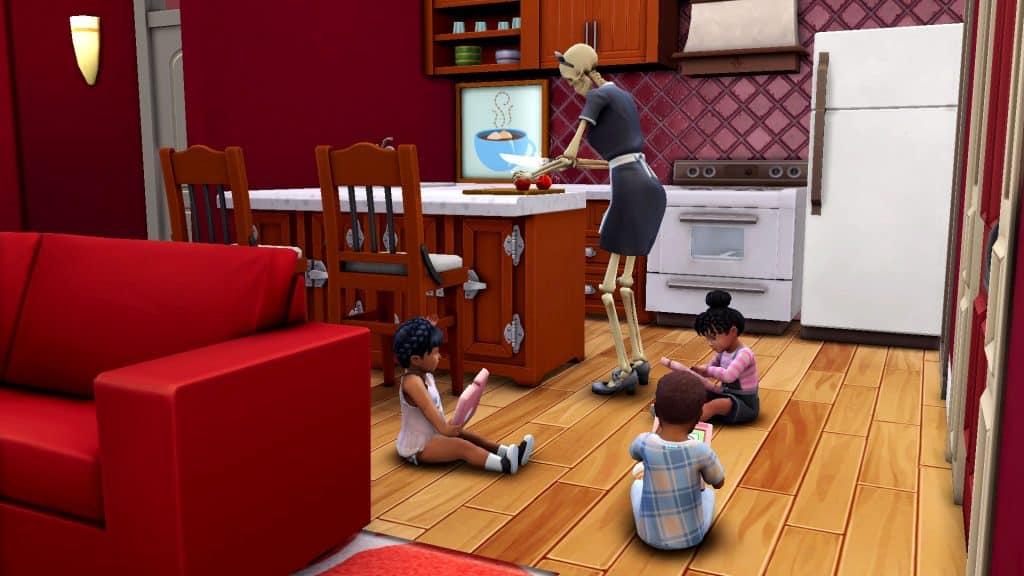 The next day after breakfast and diaper changes, the toddlers polished off the Imagination skill by playing with toys and began using the blocks to build the Thinking skill to level 3. Again, it was mostly just a matter of watching them sit on the floor with their toys and spamming the same interaction in their queues. The only time Bonehilda intervened was to give the kids baths when they started getting smelly. Pro Tip: Toddlers will not get taken away for being smelly, lonely, or exhausted. The only thing you have to do is feed them, so the baths are optional. The only reason I gave them all baths was because I was so… incredibly… bored… 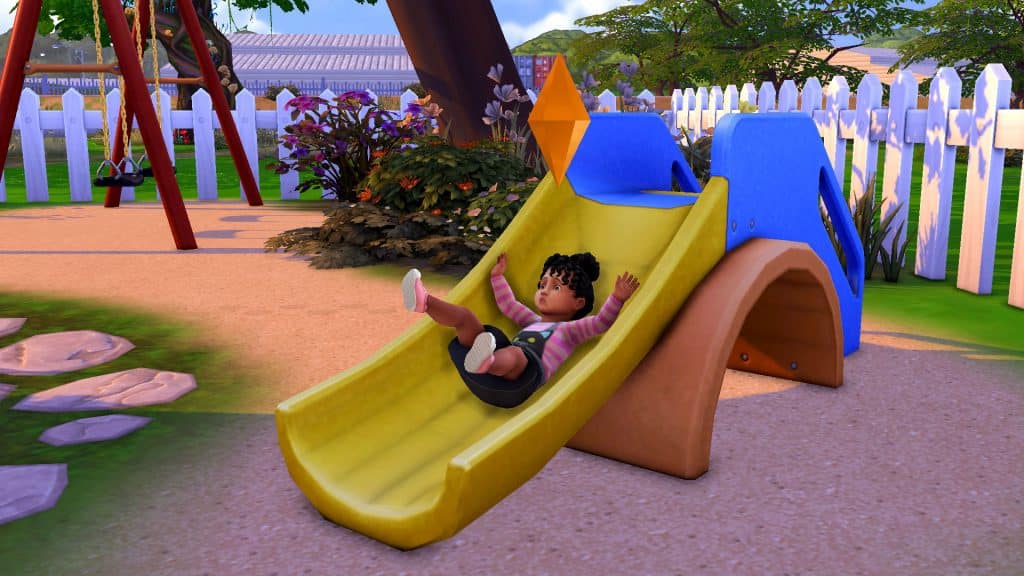 Once Thinking and Imagination were taken care of, the toddlers started rotating between the other skills. I didn’t bother to put toddler potties in the house since this scenario only required 4 skills to be built. It was easier to do the other 4 skills and ignore the Potty skill. The toddlers could go in their diapers while building other skills. While one toddler played with toys, another one would be babbling to the teddy bear to build Communication skill, and the other one would be outside in the backyard using the slide to build Movement skill. If you play with toddlers a lot and don’t own the Toddler Stuff pack, I very much recommend it. The toddler play equipment builds Movement and Imagination skill twice as fast as any of the base game skill building objects. You can start and max out the Movement skill in a single afternoon just using the slide. 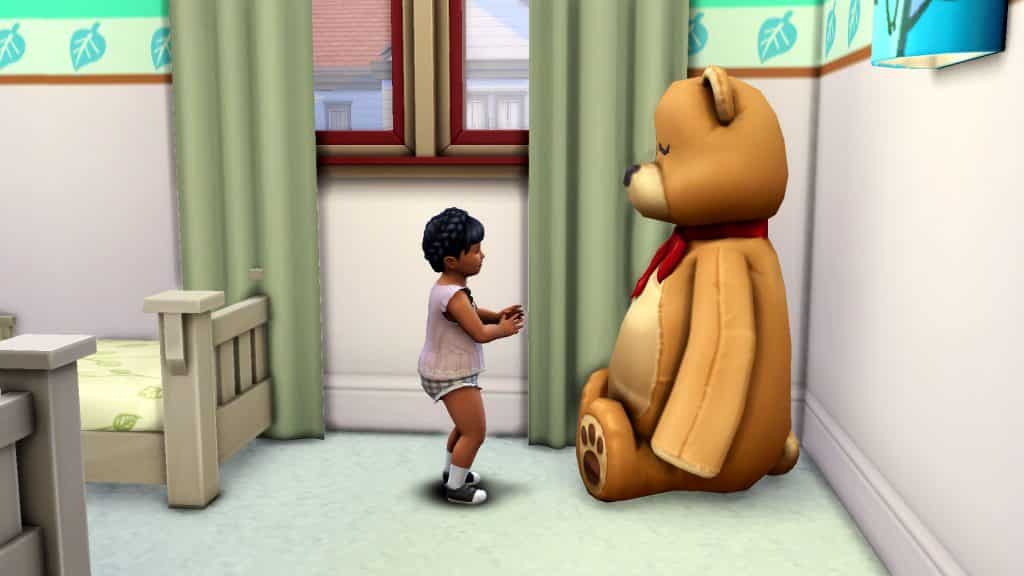 By the end of day two, all three toddlers were almost finished the scenario requirements. Each toddler only had one more skill to polish off, so once again, it was bedtime for the sleepy toddlers. The next morning, they all got fed and off they went to complete their last skills. It didn’t take very long since they were all almost done the previous day. I got that happy little notification that I completed the scenario and all of my Sims got 5000 satisfaction points as a reward. The toddlers did not have access to their satisfaction points since they don’t have an aspiration panel but once I aged them up, they were able to access their satisfaction points as children and spend them on rewards. 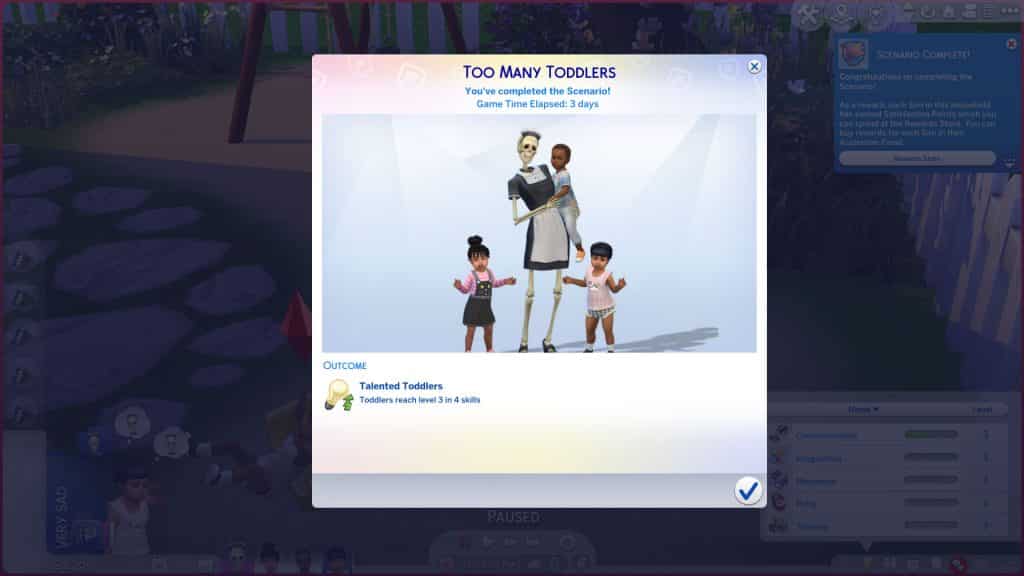 So what are my final thoughts about the Too Many Toddlers scenario? As you might have already guessed, I was underwhelmed. I really enjoyed the other two scenarios. They offered a lot of wiggle room to create drama and excitement while working towards the goals but this scenario was too linear to be interesting. All I did for three Sim days was skill grind and it wasn’t even challenging. I played without any mods or cheats and I was quite bored. Three toddlers aren’t very difficult to take care of. Seven toddlers would have been a much more satisfying challenge. I’m not sure why the scenario only required three toddlers when this is clearly supposed to be based on the Seven Toddler Challenge. My advice? Just play the Seven Toddler Challenge which is a lot more challenging and a lot more fun. Or play the Making Money or Finding Love After a Breakup scenario. Those were a lot more fun to play, too.