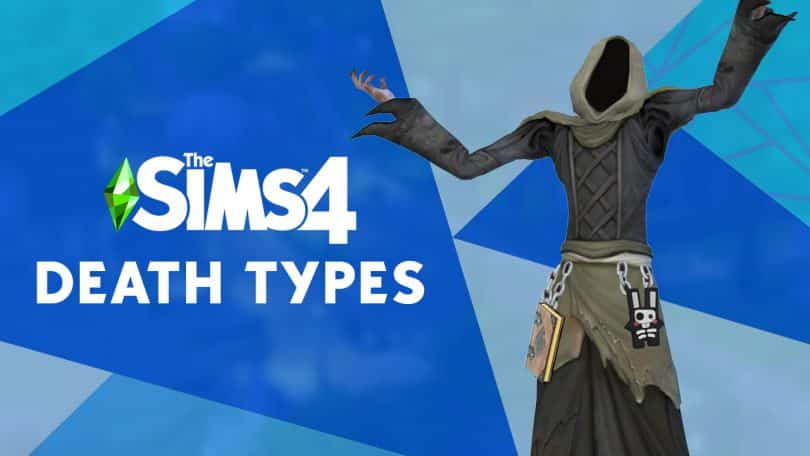 In a life simulation game, you can bet there is no shortage of ways to die. Some of them are pretty normal deaths, like old age. Others are… kind of weird. And the more packs you own, the weirder the deaths seem to become.

Below, we’ve listed every death type in The Sims 4 across every pack released to date, along with some honourable mentions that aren’t technically a unique death type. 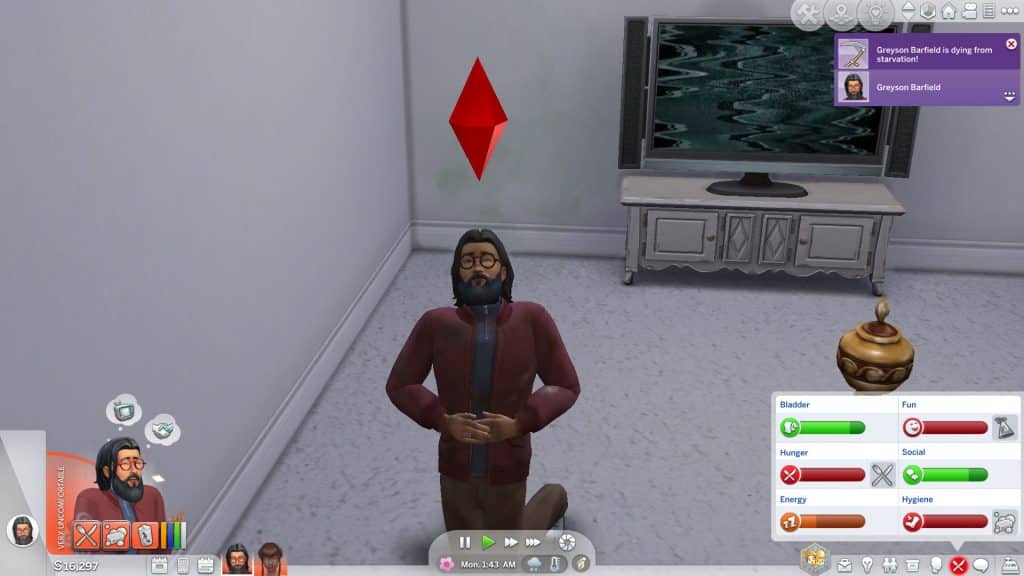 This death is straight-forward. Neglect to feed your Sims for long enough and they will die of starvation when their Hunger bar becomes completely empty. Babies, toddlers, children, cats, dogs, and livestock can’t starve to death. Kids and house pets will be taken by social services before they get to this point and livestock will run away and leave the family. Pet rodents can starve to death, however. 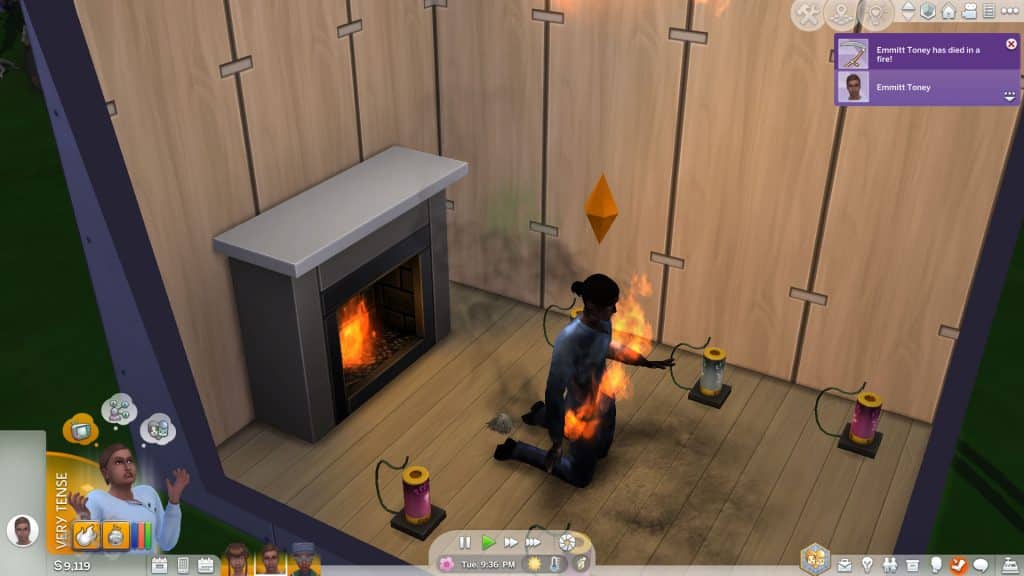 Sims can start fires in various ways both in the base game and in DLC packs. Cooking, lighting fireplaces near flammable objects, lighting fireworks, angry spectres, and even letting your house become too dusty can all potentially start a fire. If your Sim catches on fire, extinguish them quickly or they will burn to death! Pets and toddlers cannot die by fire but children can. 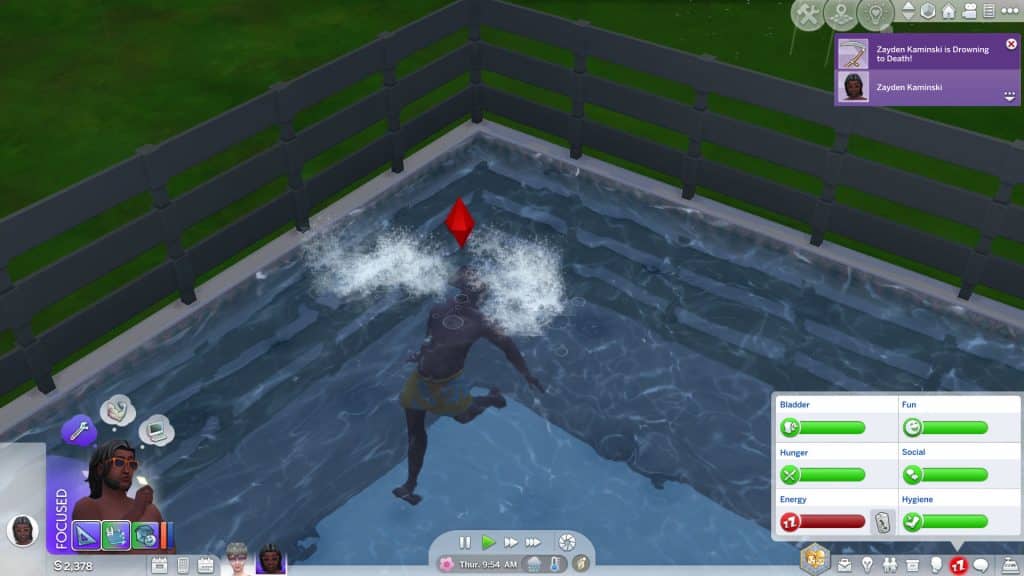 In previous games, drowning a Sim was as easy as removing the pool ladder but Sims are smarter now and can climb out of the pool on their own. To drown a Sim, you’ll have to build walls or fencing all around the edge to block Sims in and wait until their Energy motives completely depletes. 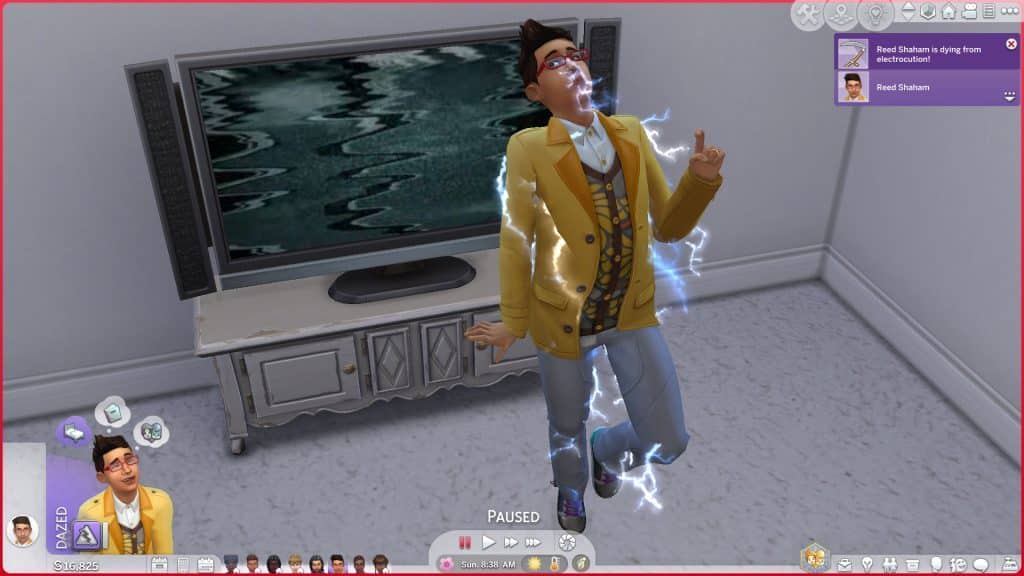 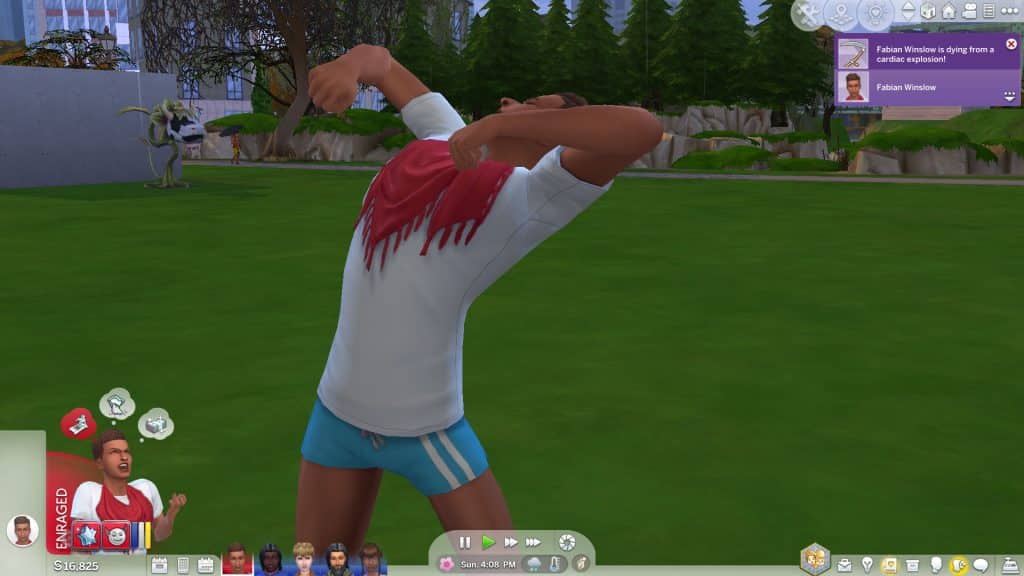 Get a Sim angry enough and it just might kill them. When a Sim surpasses the Very Angry emotional state and becomes Enraged, they have only a short amount of time to calm down before their heart literally explodes with rage and kills them! 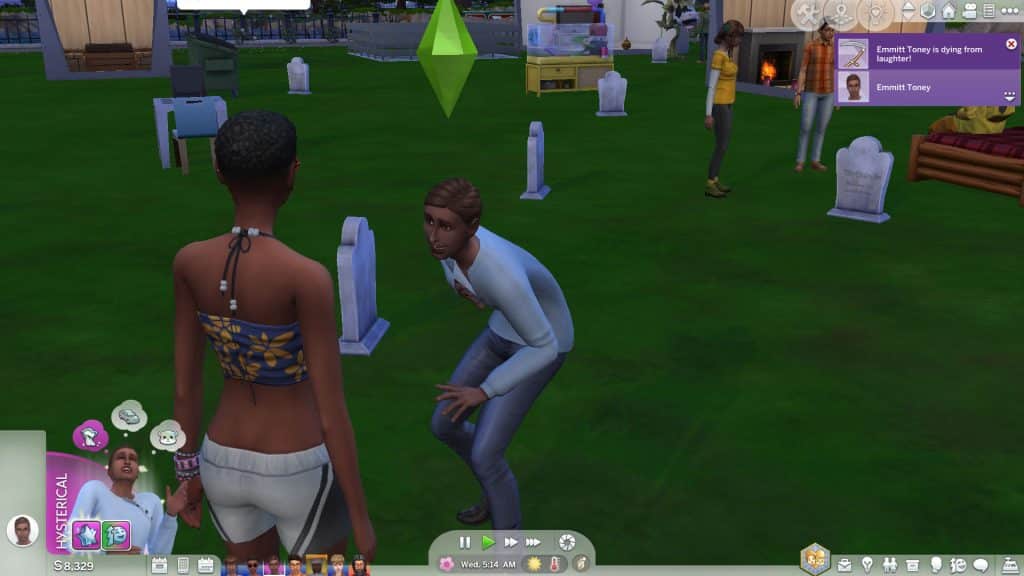 Ever heard the expression “That joke was so funny, I died!” Well, it’s not just an expression in The Sims 4. Sims can very literally laugh themselves to death. If they surpass the Very Playful emotional state and become Hysterical, you’d better calm them down fast before they die of laughter. 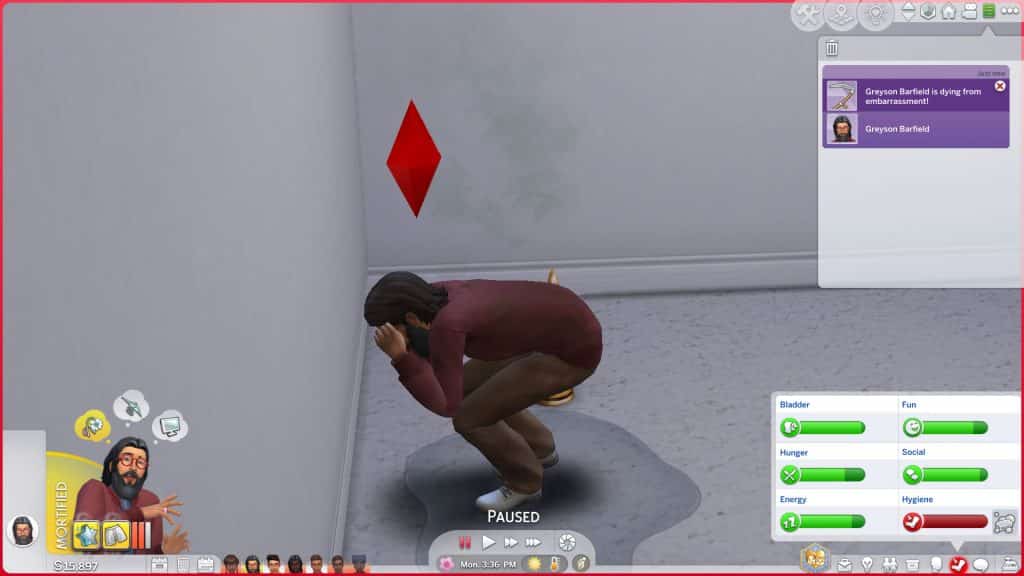 How about the expression “I died of embarrassment!” The Sims 4 takes that one literally, too. If a Sim surpasses the Very Embarrassed emotional state and becomes Mortified, they will soon die from embarrassment if you don’t intervene to calm them down. 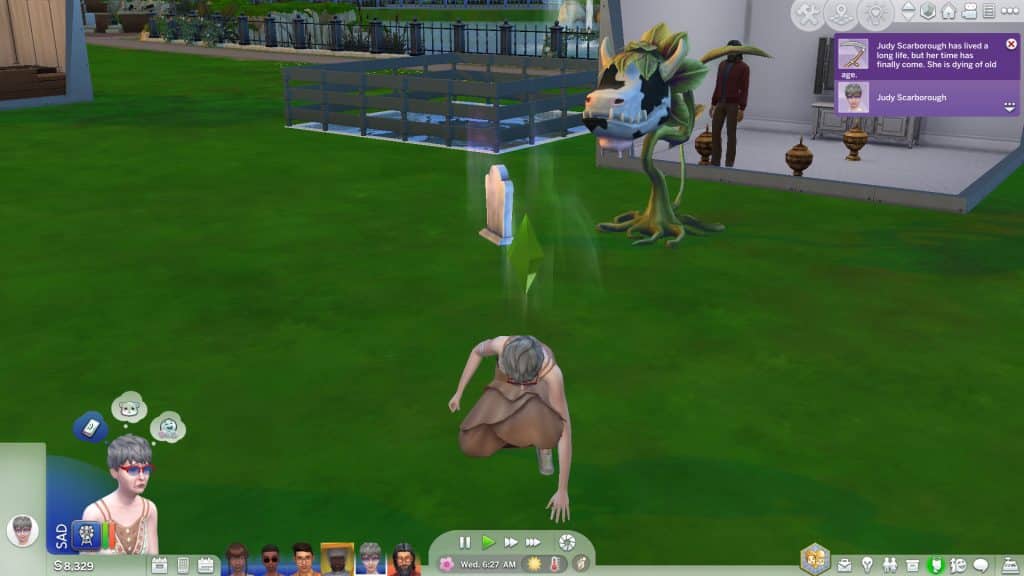 This death is self-explanatory. With aging on, Sims will eventually grow old and die. It’s the circle of life. To get this death type, have an elder Sim and just wait it out. Grim will come for them when their time is up. 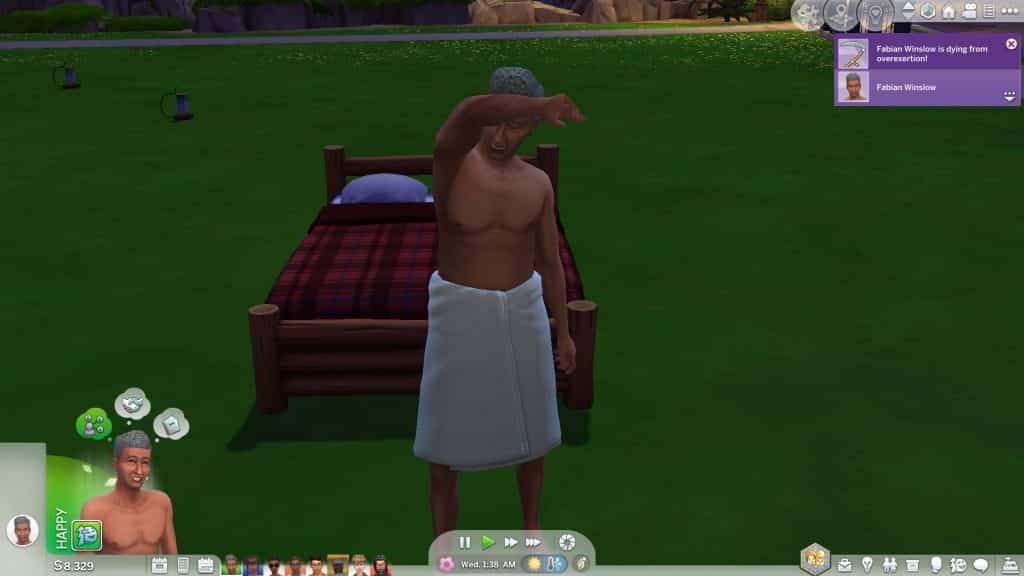 This death type is unique to elders. Elderly Sims are frail and don’t have the stamina that they used to. Things like exercise and WooHoo can really wipe them out. It might even kill them! Elderly Sims can’t exercise while they’re Dangerously Exhausted so the easiest way to kill an elder this way is through WooHoo. Have them WooHoo enough times in a row and your elder will die from overexerting themselves. Bear in mind Sims with the Active trait are a little more hardy and don’t die from this death type easily. 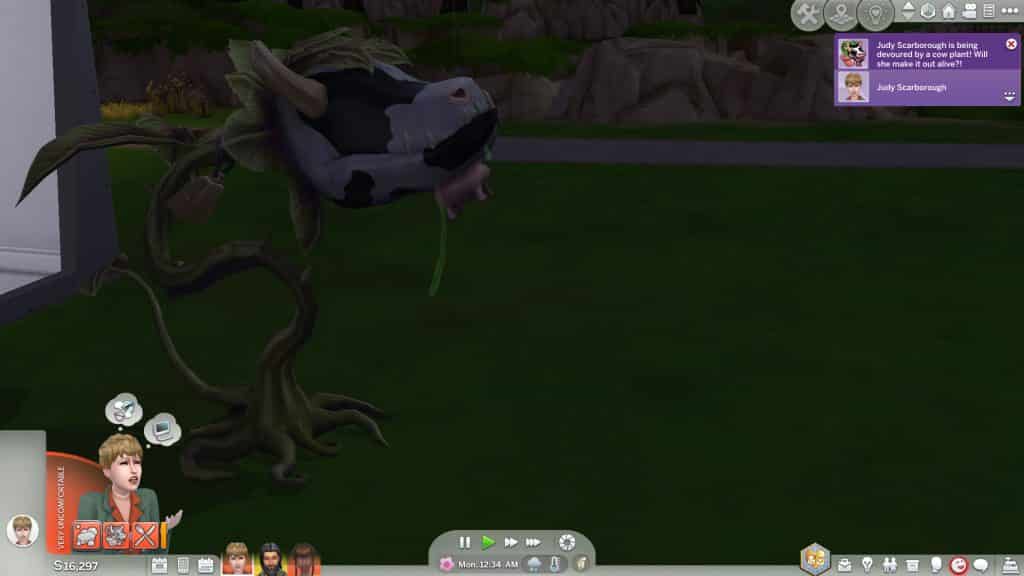 A staple of the Sims series, Sims can be eaten by their carnivorous Cowplant. Obtain a cowplant berry, plant it, and take good care of it until it grows into a fully grown Cowplant. Then wait for it to get hungry. It will stick its cake tongue out. Have a Sim Eat Cake to get swallowed up by the Cowplant! It will spit them back out the first time but if they get swallowed up again while their Uncomfortable moodlet is still active, they’ll be digested for good. 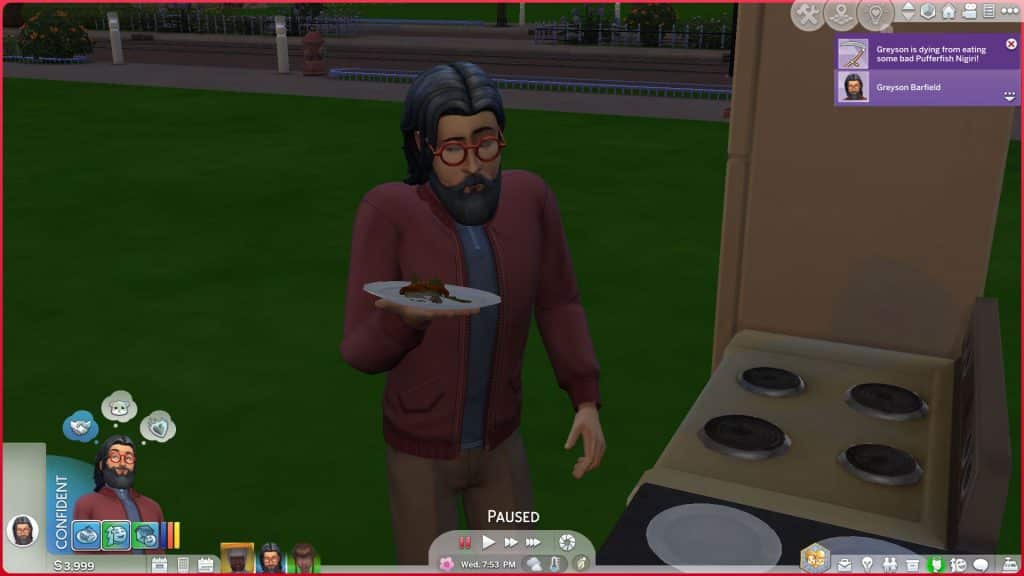 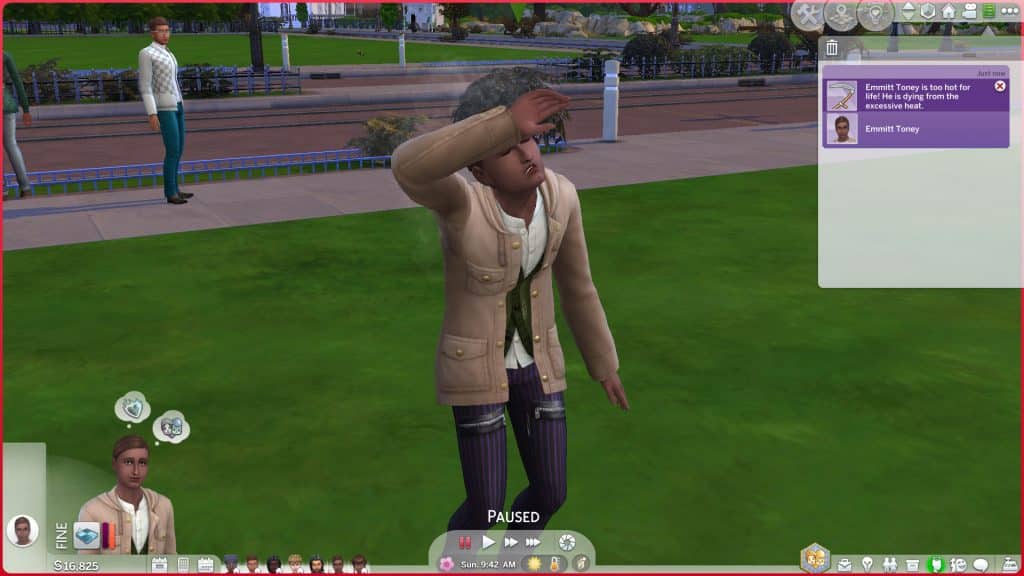 With weather comes new hazards! Staying out in the hot sun without appropriate hot weather clothing or swimwear can cause your Sims to overheat and die. 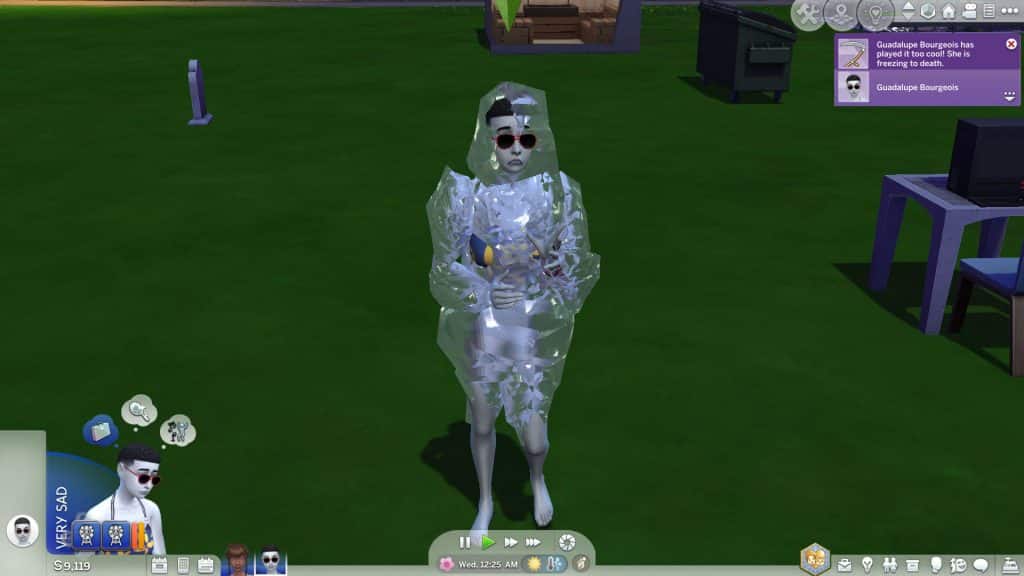 Likewise, staying outside in freezing cold temperatures without warm winter clothing will result in your Sim freezing to death. 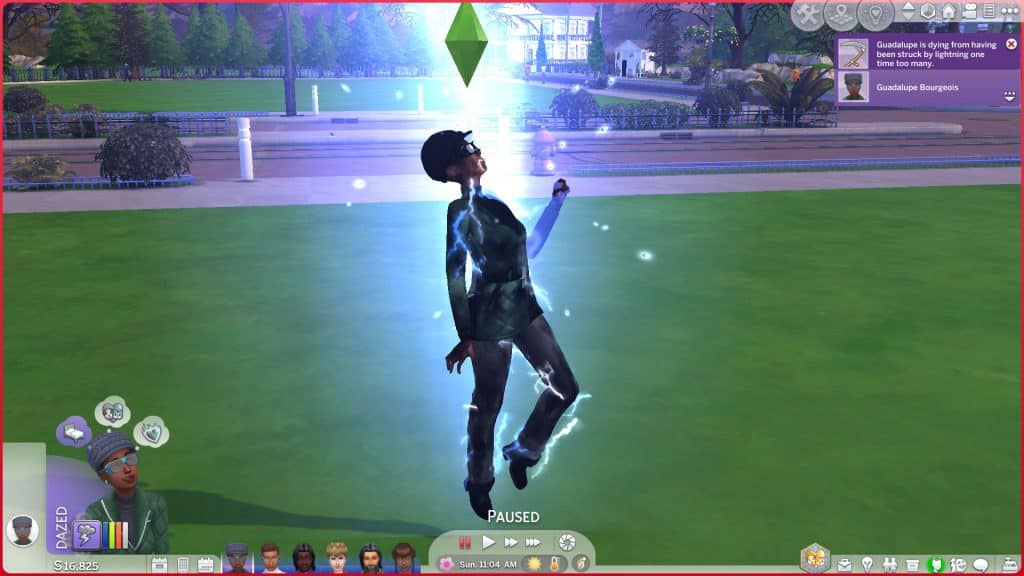 Thunderstorms present a deadly hazard to Sims, too! If you choose to stay outside during a thunderstorm, you may be struck by lightning! Super cool the first time but you risk dying if you get struck again while still Dazed from the first strike. Or you could become Supercharged and temporarily gain the ability to control lightning. So maybe it’s worth the risk? 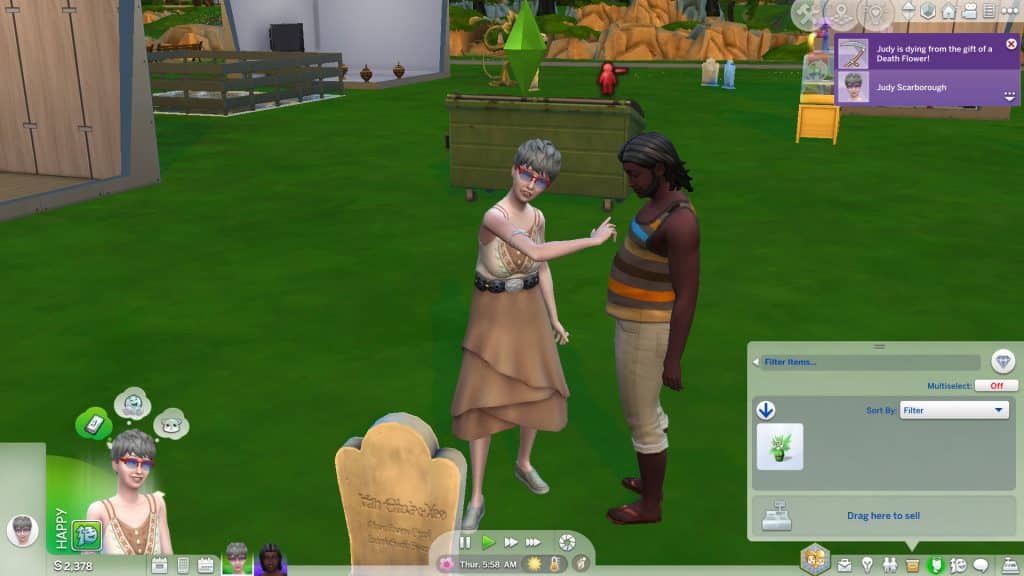 Sims skilled in Flower Arranging can scent their arrangements with a variety of flowers. If a Sim scents a floral arrangement with a death flower and gifts it to an elder Sim, the elder Sim will die by Death Flower! Gifting a death flower scented arrangement to younger Sims will just cause them to age up. Interestingly, gifting this item to a vampire turns them human. 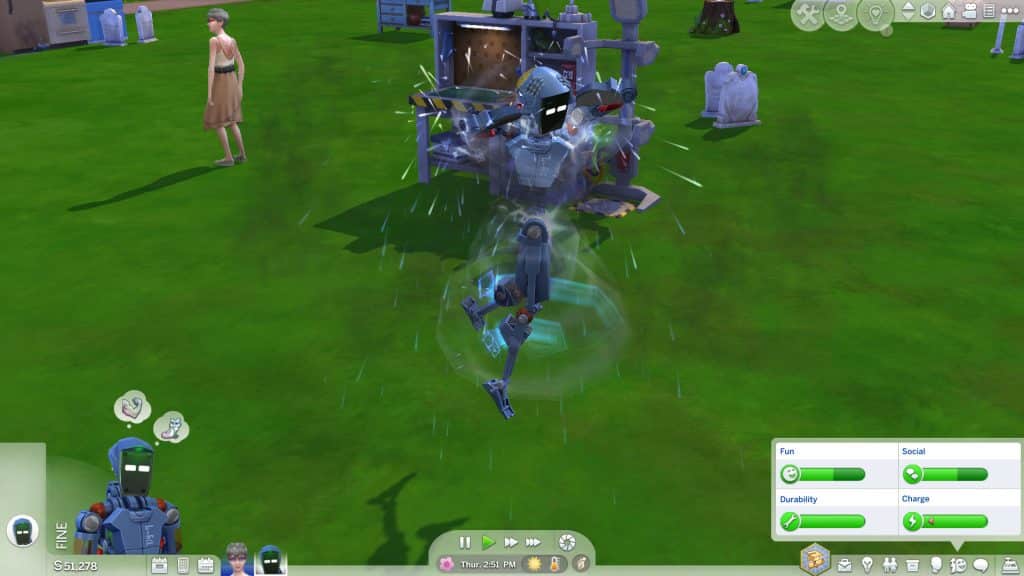 This death type is unique to Servos. If a Servo goes too long without maintenance, they can break down and suffer a catastrophic meltdown. The poor servo will deteriorate into spare parts and leave behind a futuristic-looking tombstone. 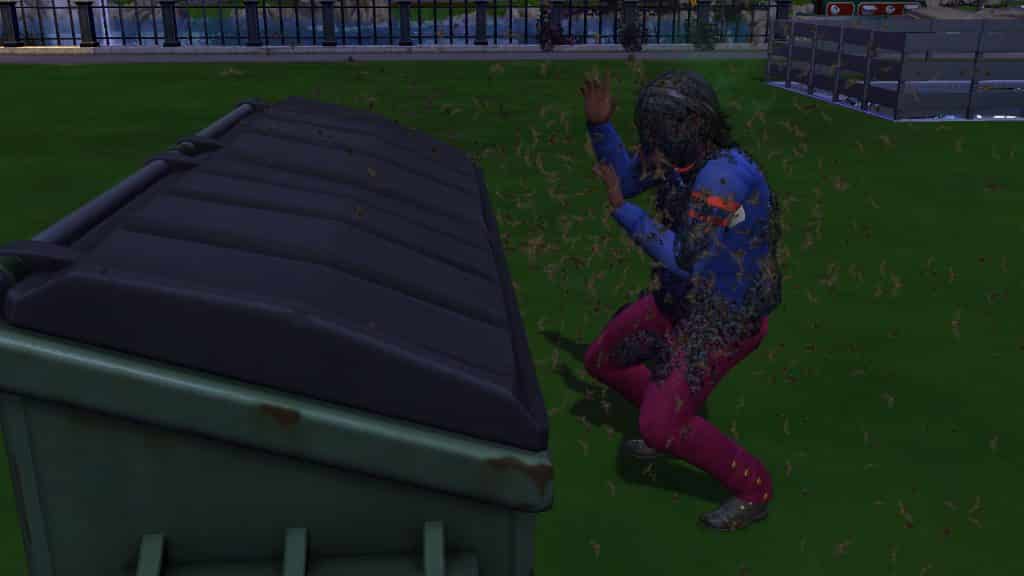 Death by Flies makes a comeback from The Sims 2! Letting your trash overflow can attract flies to the smelly junk heap but the flies are anything but harmless. Sims risk being eaten alive by the buzzing pests if they try to get up close and personal with them! 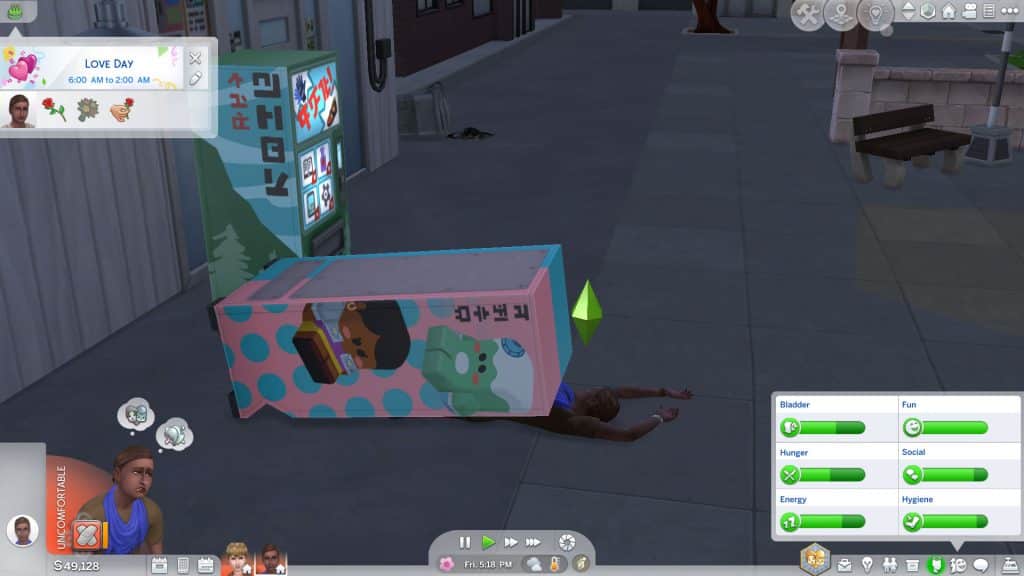 You can get all kinds of neat things out of vending machines in Mt. Komorebi but be careful; vending machines get items stuck in them a lot and your Sims can be crushed by the vending machine while trying to get the item unstuck. Having a vending machine fall on your Sim while they still have the Close Call moodlet from being previously crushed will result in death. 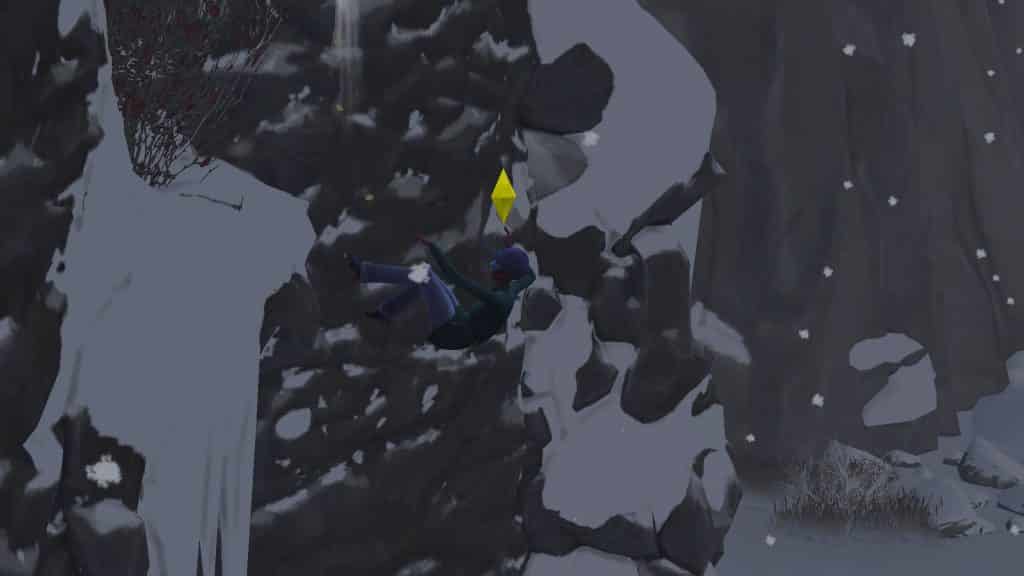 Rock climbing is an exhilarating sport but it’s also dangerous. Especially near the summit of Mt. Komorebi. Inexperienced climbers have a high chance of falling to their deaths from The Croft Icefall on a mountain excursion. 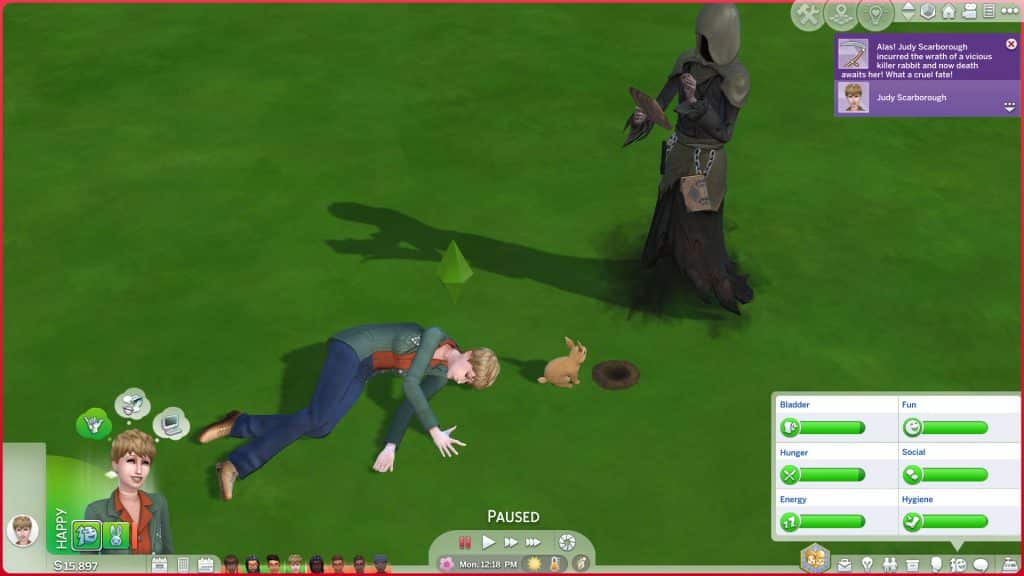 Who said bunnies were all cuddly and cute all the time? Haven’t you seen Monty Python and the Holy Grail? These fluffy little critters may seem sweet at first but get on their bad side and they might just decide to turn vicious on you! 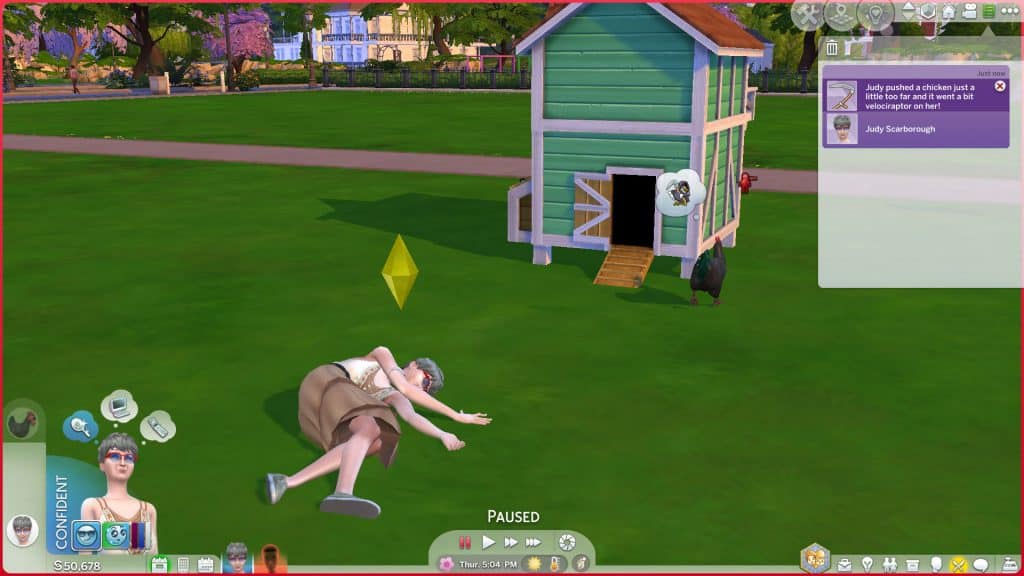 Needless to say, you should be nice to your chickens if you want good quality eggs but there’s another benefit to being friends with your chickens; not being murdered by them. No, seriously. Do enough mean socials with your chicken and they will decide to go all velociraptor on you and peck you to death! 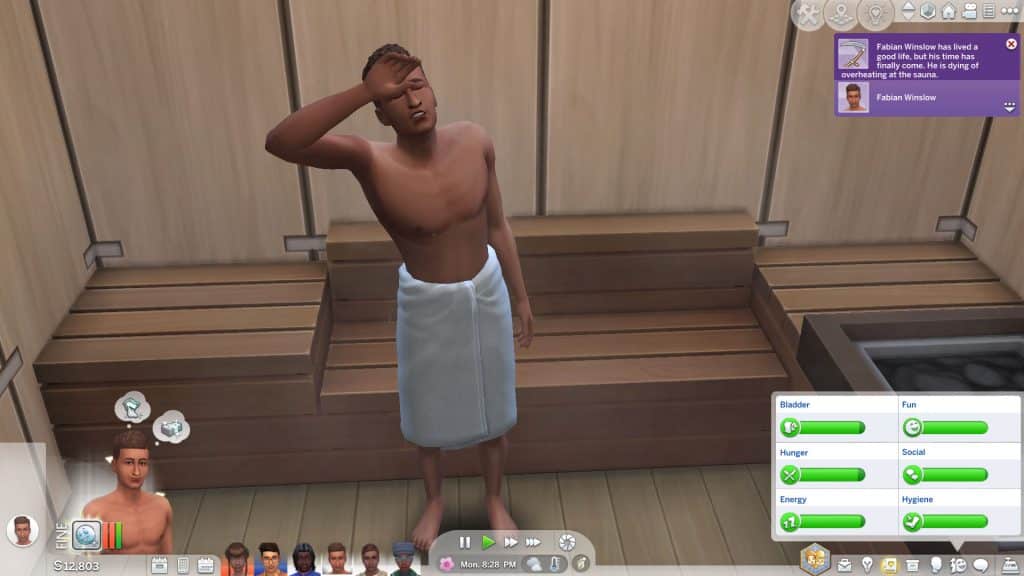 Saunas can be so relaxing but don’t overdo it! Staying in the sauna too long can be fatal! Your Sim will die from too much steam if you leave them in there for too long. 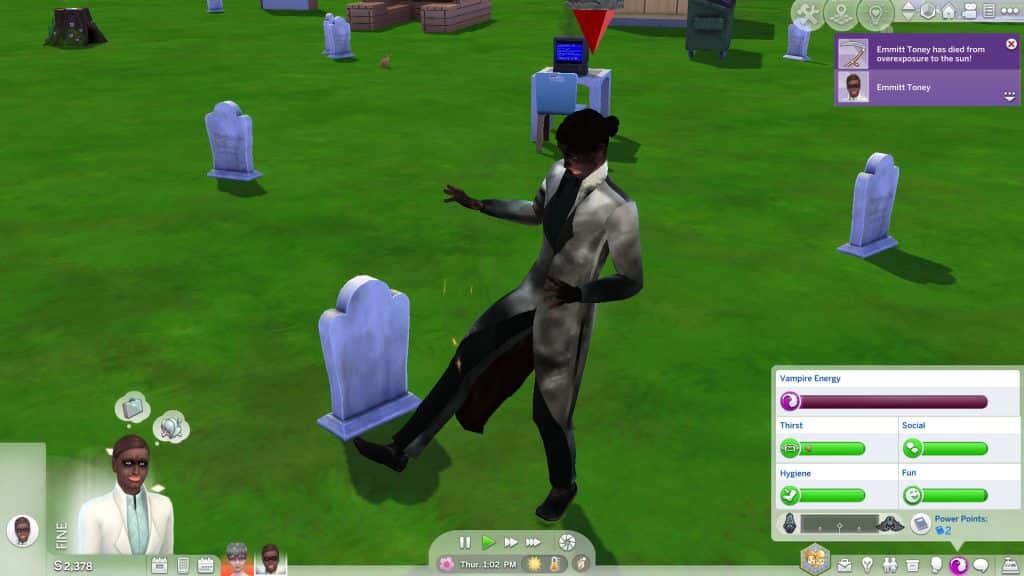 This death is unique to vampires. Leave a vampire out in the sun until their Vampiric Energy completely depletes and you’ll have an extra crispy vampire tombstone on your hands. Vampires with the Full Sun Resistance ability are immune to this death type. 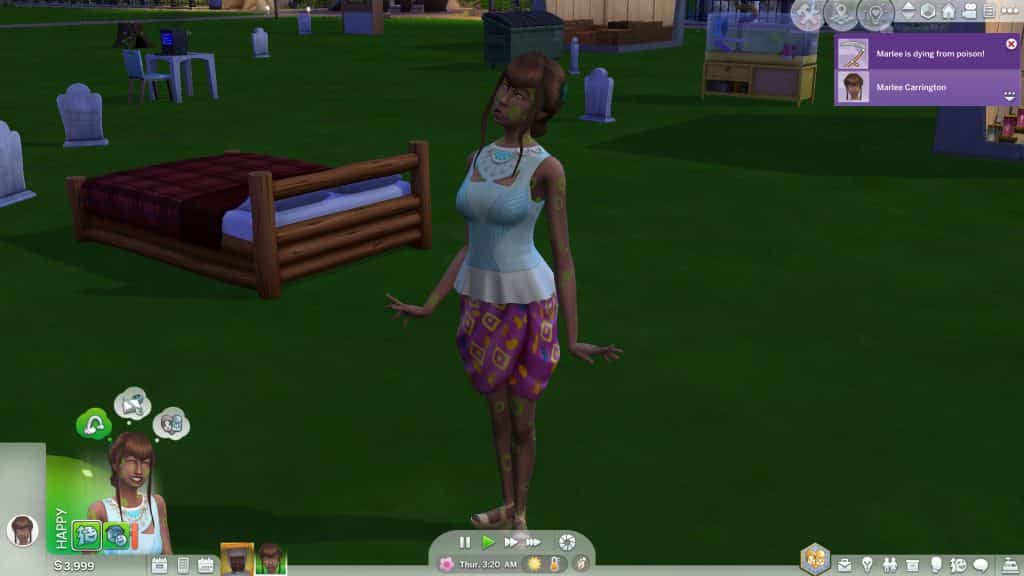 If you’re planning a trip to the wild jungles of Selvadorada, beware of the danger. Sims risk being poisoned by temple traps and creepy crawlies around the jungle. Sometimes they can fight it off without help. Sometimes they can’t. If your Sim isn’t able to overcome the poison on their own, they’ll need an antidote or they will eventually succumb to the poison after a few days.

Consumed by the Mother 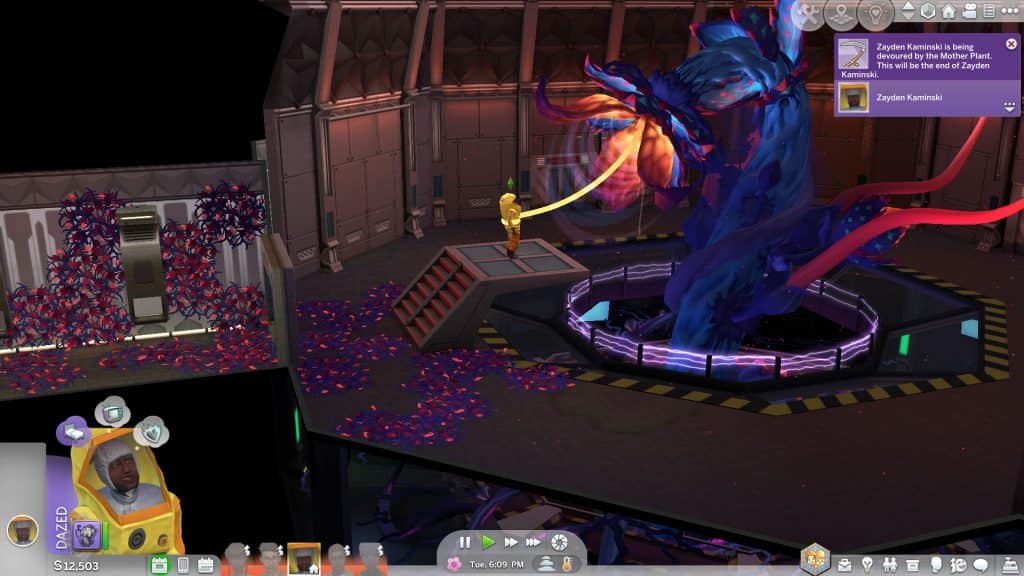 This death requires your Sims to play through the StrangerVille Mystery storyline. When you get far enough along in the story, you’ll come face-to-face with a terrifying plant monster known only as The Mother. She means business. If your Sim rushes into battle with her unprepared, she will gobble your Sim up and that’s the end of your Sim. 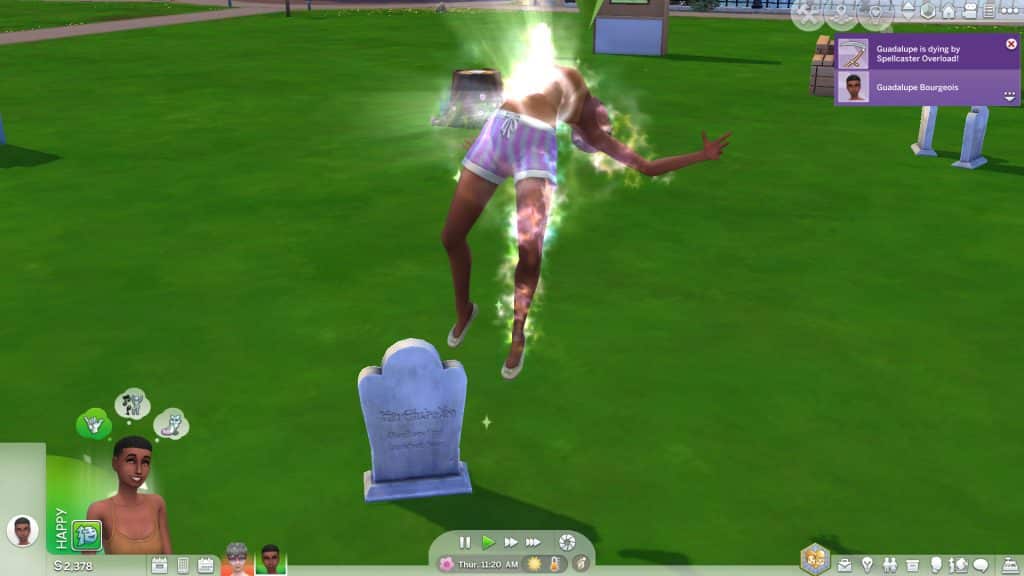 This death is unique to Spellcasters. A Spellcaster needs to watch their magical charge; casting too much magic too quickly can cause them to become overcharged. If a Spellcaster continues to use magic while overcharged, they can literally explode. Boom! No more Spellcaster. 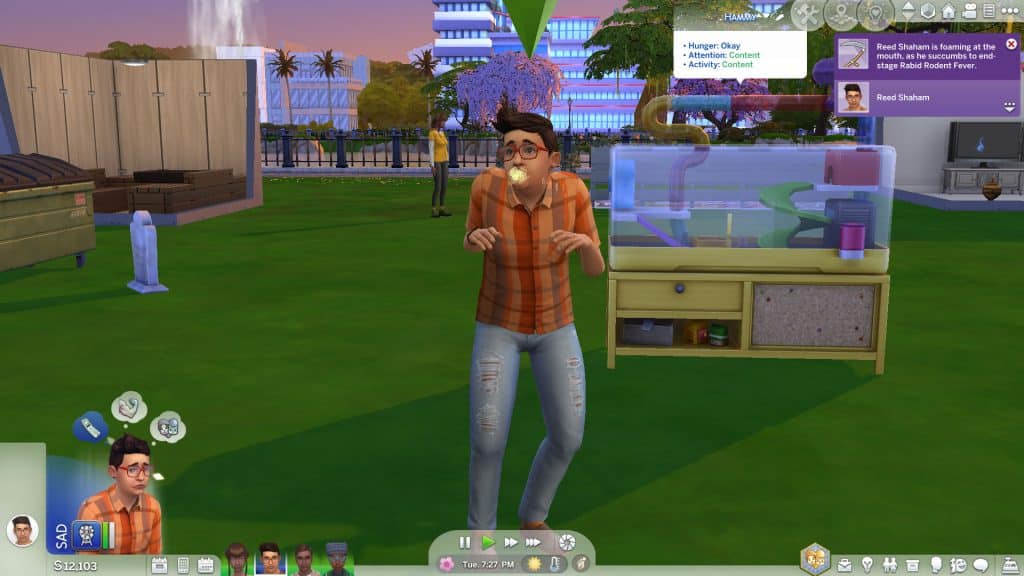 Another old favourite from the past returns in The Sims 4. If a rodent with a dirty cage bites your Sim, they can contract Rabid Rodent Fever. This is a highly contagious illness that will spread to everyone in the household if you don’t act fast to quarantine the infected Sim. Neglecting to cure them with Rabid Rodent Fever Medicine will result in death after a few days. 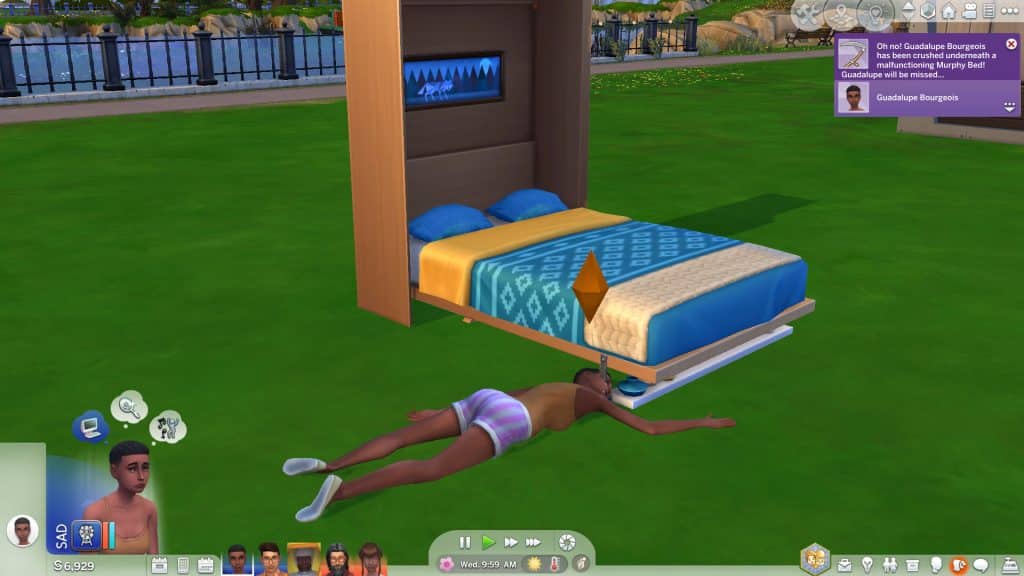 And yet another fan favourite death type makes a return. Murphy beds are great space savers but uh… make sure you upgrade it as soon as possible. They have a bad habit of falling on your Sims and killing them. Like a lot.

The following deaths aren’t a unique death type; they fall under one of the other death type categories but Sims can also die doing these activities.