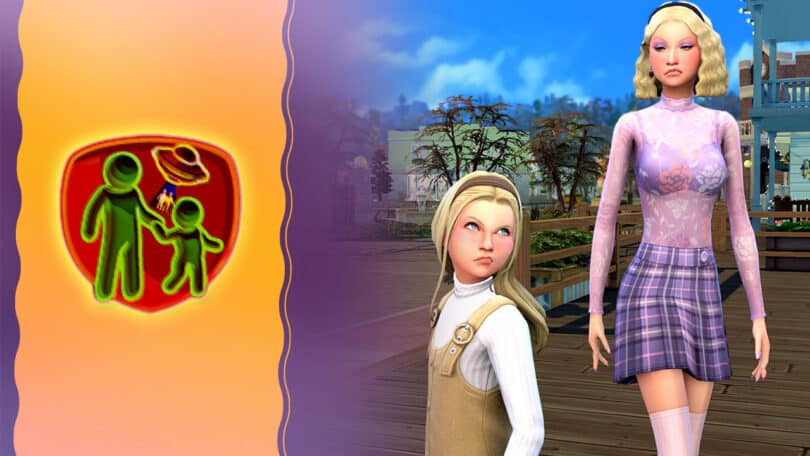 The weirdest and most challenging scenario yet!

The latest SDX drop for The Sims 4 has added a new permanent scenario to the game; Aliens Stole My Parents. Yeah. It’s as weird as it sounds.

We’re going to walk you through how to complete this scenario!

The scenarios menu has received yet another cosmetic update. The Start Scenario option on the main menu is obnoxiously hard to miss so click that to be taken to a list of scenarios displayed in tile format. The Aliens Stole My Parents scenario is listed as an Intermediate scenario.

The description states that aliens have abducted a teen and a child Sim’s parents, leaving them to fend for themselves. However, the aliens were nice enough to leave a note informing the children that if they raise their grades and make some money, their parents will be returned safely.

As usual, the requirements on the menu screen are completely vague and unhelpful so I’m going to outline the objective in detail for you. You’ll need a household with one child, one teen, and at least one young adult or older Sim but you can have up to six. The goals for this scenario are:

You have to complete all goals before the teen or the child age up, otherwise you’ll fail the scenario. You can eliminate the risk of failing by turning aging off in the game settings.

When you start the scenario, all the young adult and older Sims will disappear off the lot. Clicking their portraits will show that they’ve been abducted by aliens in their action queue. Your teen and child will be left alone with only $500 in household funds.

I knew this was going to be a challenging scenario so I got right to work. Chloe, my teen, immediately got a part-time job as a Simfluencer because I know for a fact that you can make a killing off of selling Trendi outfits. Trendi’s the best way to go to make $15,000 as a teen. She also joined the cheer team because she has the Goal Oriented teen aspiration.

Almost immediately, I ran into my first big hurdle. I had no money to buy a computer, which Chloe needed for her job. I also had no money to invest in creating Trendi outfits. So Chloe did the only thing she could; she sold absolutely everything but the bare necessities in her house which gave her a couple thousand to start with. She used the money to buy a computer and start putting together her first Trendi outfits to sell. The trick with Trendi is to wildly overprice everything. You won’t sell many outfits at first but you’ll usually sell one or two before the listing expires. Keep relisting them at exorbitant prices for long enough and eventually, they’ll start to sell. That’s what Chloe did and it didn’t take long for her to start selling outfits listed at $5,000 a piece.

As for Elise, her kid sister, she had a lot less on her plate. All she needed to focus on was school and her aspiration so she was in a much better mood than Chloe most of the time. Chloe, on the other hand, was constantly exhausted and craving fun between juggling school, cheerleading, her simfluencer job, and her Trendi side hustle. Oh, and fighting monsters under the bed for her little sister. Yeah. I invested in the Coolala Defender nightlight real fast.

While Chloe worked her butt off day in and day out at selling outfits at the thrift shop, Elise would play on the monkey bars for hours in the nearby park area to work on her Rambunctious Scamp aspiration. And whenever any of them had a spare moment on their hands, they were doing homework and school projects to push those grades up.

Eventually, both girls got an A in school, alleviating some pressure off of Chloe. All she needed to worry about was keeping up with her homework now, which allowed her to do things like sleep and occasionally, handle her raging acne and body hair problem. Elise threw all her time into her aspiration and made faster progress now that she was already an A student and the girls even had some time to bond in the kitchen while making dinner together. That’s four out of seven goals completed. Not bad.

The weekend was a blessing because it gave Chloe and Elise all day to work on scenario goals. Elise basically lived on those monkey bars until she completed her aspiration. Chloe sold enough outfits to have a whopping $18,000 in household funds, and feeling like she had finally earned a break, Chloe made a call to the nanny to watch her sister for a few hours so she could finally go out and have some fun.

This completed the scenario for us in 7 days. Mom and Dad were safely returned to the household, Chloe got the Mentor trait, and Elise got the Speed Reader trait as rewards.

This is definitely a strange scenario and a challenging one but I had a lot of fun with it. While it wasn’t too hard for me to juggle everything, I still had to pay very close attention to many things at once 24/7 in order to complete the scenario without any cheats. I would label this scenario as Hard rather than Intermediate due to the crazy amount of multitasking and micromanagement involved.

As for the rewards… two traits I could have purchased is once again, an underwhelming reward. It hardly seems worth all the effort. Can we please just go back to getting 5,000 satisfaction points for every scenario? I miss being able to spend my reward points on traits I actually want.