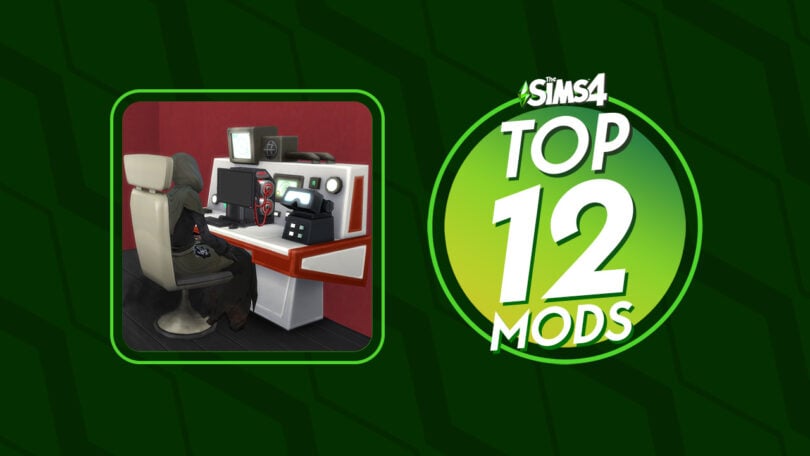 Old favorite Sims 4 mods downloadable in a new way! Find out what mods are trending in Curseforge’s Official Mods Hub.

CurseForge released their The Sims 4 Mod Hub website on November 14th. Since then, Simmers have been downloading Mods/CC and we can finally see what Mods were downloaded the most during the first week! These are some of the most essential Sims 4 mods.

For now, all the downloads are done from the website and on December 6th, the full Sims 4 Mod Manager will be available for people to use. All the mods downloaded will need to be manually installed similar to the current method of installation.

Keep in mind that this list is not an indicator of the most popular mods of all time due to the Mod Squad’s early involvement and the recent release of the Mod Hub.

Storytelling is greatly enhanced by the current most popular mod, WonderfulWhims. With its Attractiveness System, Impressions/Personality, Menstrual Cycle, and Birth Control, etc., gameplay is more realistic with a cast of more diverse Sims. In addition, the ability to Pose Sims is a great asset for those that use custom poses.

Add some realistic gameplay and pose Sims with WonderfulWhims by TURBODRIVER!

MC Command Center is the tool belt of the Sims 4 so much so that is often listed as one of the best sims 4 mods. It has so many uses from story progression and auto save to turning on certain cheats or enabling debug. By comparison, it is the one top Sims 4 mods that Simmers say they could not play without.

Customize your game with MC Command Center by Deaderpool! It is available on CurseForge!

After making a fair amount of Sims, it is not surprising when our Sims start to act the same. With 100 new base game traits, chingyu1023 has allowed Simmers to create unique Sims in ways that the Base Game doesn’t allow. Even with packs, there is not enough diversity in traits. And because of that, chingyu1023’s 100 Base Game Traits Pack v.1 is an essential Sims 4 mod.

Create a diverse group of Sims in your next save with 100 new base game traits! This mod is on CurseForge today!

Online dating has become an important part of many people’s lives so it is no surprise that LittleMsSam created SimDa Dating App for The Sims 4! It has three main types of dates: specific dates, blind dates, or one night stands. To install, make sure you go through the optional folders to delete the files you don’t want including the pregnancy chance files in which you can only have one installed. This mod adds so many new storylines to your game and depending on the optional files you choose, Sims might end up with a bundle of joy from the experience.

Go on blind dates, select dates, or even a one night stand! SimDa dating will allow Sims to experience
both the good and bad parts of online dating!

Turbodriver’s Unlimited Jobs+ allows Sims to work more than one job at once. This is either a challenge or torture for your Sims. In the end, you decide.

How many jobs can one Sim have at once? With this mod, you can find that out.

Somik and Severinka’s Realistic Cooking Mod allows Simmers to have a more realistic cooking experience. As shown above, there are new ingredients and changes to EA recipes. Consequently, this Sims 4 mod creates a whole new cooking experience for your Sims. Perfect for anyone that enjoys Alpha content in their game. If you use other food mods, RCM is compatible with several creators’ foods and Srsly’s Complete Cooking Overhaul (SCCO). The compatible creators are mentioned on the download page.

Now your food can even be realistic! Realistic Cooking Mod is available on CurseForge.

Live in Business by LittleMsSam

After commuting from Henford on Bagley to SanMyshuno every day, a Sim can get a little tired of the open road. Luckily, the Sims 4 mod “Live in Business” lets them start a business right on their residential lot. No more long commute and hello working in pajamas!

What’s better than a residence? A residence plus a business! Download Live in Business by LittleMsSam from CurseForge.

Sometimes pregnancy doesn’t end with a baby. With the Miscarriage Chance mod, pregnancy has the chance of miscarriage which makes it more realistic than the Sims 4 base game. All in all, it’s an essential mod if you want the Sim pregnancies to be more realistic and a little less perfect.

Add reality into your game with the addition of Miscarriages.

Looking through The Sims 4 Mods on CurseForge, one that sticks out is the Sims 4 Multiplayer Mod! Generally, Sims 4 is a single player game so the ability to play with a friend is exciting! Although, this free version does not allow people to play over the internet, you can still play when on the same local area network! At any rate, sounds like the perfect mod for hanging out with your friends!

Baby’s first picture! Get your Sim’s fetus photographed at the doctor’s, then hang it on your Sim’s wall. As shown above, there is a different ultrasound based on the number of Sim babies.

Coupled with a birth certificate, it’s the perfect decoration/keepsake for any Sim!

Teens have a lot of different interests and skills which makes the few jobs that they can work seem unrealistic. The Sims 4 Mod “Teens Jobs Collection” is a great selection of jobs that can be done by Teens. As shown above, these range from camp counselor and dog walker to model and sports coach.

Compared to the limited selection in The Sims 4 Base Game or even with packs installed, this is a vast improvement.

Give your teen a new job! Includes 10 new and unique careers perfect for teens!

Balanced Life removes the exaggerated aspects of the Sims 4. In addition, this includes things such as emotions and needs, skills, relationships, and metabolism, etc.

With Balanced Life, it will overhaul your Sim’s whole life and create a more realistic life for your Sim!

Who are the other creators that are part of the Mod Squad? For example, check out: The Sims 4 Mod Squad: Meet the Creators!

Interested in uploading your own creations? Here’s how! The Sims 4 Mods Hub Guidelines: What are the Rules?

What CurseForge mods do you think are the Best Sims 4 Mods?