You’ve followed your Sims to work as a Doctor, Detective and Scientist, but what about the many other careers available in the game? When it’s time to leave for work, they’ll disappear into the background and return when the work day is over.

Well, that won’t be the case for much longer! Introducing The Sims 4 Turbo Careers Mod Pack! For players who have both The Sims 4 and The Sims 4 Get to Work Expansion Pack, Turbo Careers turns all closed adult careers into open ones, as well as two of the teen careers (Fast Food and Barista) with the possibility of more in the future.

I’ve been working on this mod for more than a month now, and am very excited to reveal it!

I estimate that it will be released around the end of the month sometime, but I have no idea exactly when. Sorry it will have to take so long, but this is a very big mod and will need a lot of testing. Hopefully the upcoming Spa Day Game Pack will keep you entertained for now.

(Thanks to TheSimplyNando for creating the above logo) 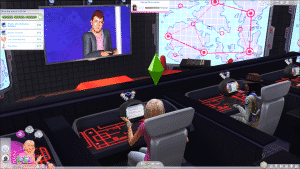 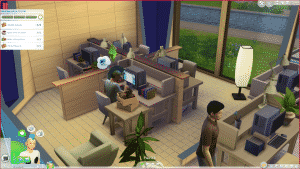 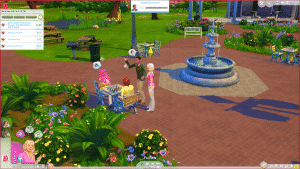 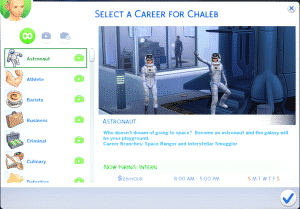 Careers converted by Turbo Careers work the same as those available with Get to Work: when it’s time to leave, you’ll be given an option to join your Sim or send them alone. If you choose to join them, they’ll be transferred to a community lot where you’ll receive goals to complete. Each career has different sets of goals to complete.

Goals will often change as your Sim moves up the career ladder. The lower levels will often consist of training for what’s ahead of cooking, washing dishes and making coffee, and things will start to get more interesting at the higher levels. Most (though not all) levels have a major goal to complete as well as various minor goals.

Every adult career has its own venue type which can be placed anywhere in any of the available worlds. You can download career venues from the gallery or make your own. When it’s time for your Sim to leave for work, they’ll be sent there. Both of the available teen careers will take place on the Culinary lot.

There are three combined venue options available for those who want to save space in the world:

The Culinary and Criminal careers only have individual venues, though as mentioned above, the Culinary lot will also host the Fast Food and Barista careers.

Originally, combined workplaces were the only option, but the newest patch added a scrollbar to the venue list in Build Mode, allowing for more space.

When the work day is in progress, other Sims from the same career will appear on the lot. Just in case there are no co-workers in any of the worlds, there will also be a small number of visitors so you’ll always have a way to fulfill social goals.

Turbo Careers isn’t just about what goes on in the workplace: there is also field work available. All careers have field work, though some are more involved than others. Field work isn’t as advanced as detective work or home calls in Get to Work: your Sim won’t receive field jobs while they’re at the workplace and will instead simply be sent to where it takes place as soon as the work day starts. It’s still a lot of fun, though!

The main job of an Astronaut is obviously to explore space. The early levels of this career mainly revolve around working out on exercise equipment. As your Sim moves up, they’ll shift focus to building and upgrading rockets and finally fulfill their dream of blasting off into space. After the branch off, your Sim will have a chance of receiving field work in Planet Sixam, which will depend on which branch you choose. Space Rangers will be assigned socializing with aliens, and Interstellar Smugglers will be asked to find collectibles and take photos.

Athlete is a much simpler career that revolves mainly around working out on exercise equipment. The main goal of the higher levels will depend on the branch. For Bodybuilders, it’s to work out on the exercise machine, and for Professional Athletes, it’s to jog. Of all the careers available by Turbo Careers, the Professional Athlete branch is probably the least true to its name. Personally, I imagine it works similar to The Sims 3, where most days revolve around training but there are special “game” days. I was considering having one day a week where players wouldn’t have the option of following their Sim, but I decided to just leave it up to them what to do. At level 8 of either branch, Sims will have a chance of receiving field work to socialize at the gym, with the main goal being to show off muscles.

Business is also fairly simple. The main goal is the same as your Sim’s daily task – File Reports, Make Business Calls or Research Stocks. At the lower levels, your Sim will be asked to cook, wash dishes and make coffee as minor goals, but this will shift to performing social interactions later on. After the branch off, your Sim will have a chance of receiving field work performing the “Offer Career Advice” interaction at Retail venues.

The Culinary career revolves around, as you guessed, cooking and mixing drinks. At the lower levels of this career, your Sim’s main goal will be to wash dishes, though cooking on their own and socializing with guests and co-workers is still available as minor goals. Later on, cooking will become the main focus, with a little bit of mixing drinks in the middle. After the branch off, the career will change drastically depending on the branch you choose. Chefs have a chance of being hired as a Caterer at an inactive household’s home lot. Bartenders will jump between bars, clubs, lounges and the work venue.

The early levels of the Criminal career are about performing pranks with co-workers, later moving onto trolling on Internet forums and then handing out fake party invitations to unsuspecting Sims. Things get more devious after the branch off. Bosses are required to perform Mean interactions on Sims around town, and Oracles program viruses at the work venue, with occasional trips to the library.

Entertainer is actually the simplest career of all in terms of how it’s designed, but is very entertaining and has storytelling potential because of how socially active it is. The early levels of the career will revolve around training at the work venue. After the branch off, your Sim will receive field work at the lounge(s) to play music and tell jokes/perform comedy routines, depending on the branch. Cooking, washing dishes and making coffee are available as minor goals early on.

The early levels of the Painter career will revolve around painting, with critiquing art as a minor goal. At the branch off, you can choose to continue focusing on painting (Master of the Real) or become a critic (Patron of the Arts). Master of the Real has field work to paint and socialize at the Museum. Patron of the Arts always occurs at the museum, so you’ll never need to go back to the work venue. Cooking, washing dishes and making coffee are available as minor goals early on.

The Secret Agent career consist almost entirely of field work, with the exception of the first three levels. The main goal of the first level will be to Browse the Intelligence Database, followed by Do Intelligence Research on the second level, and socializing with co-workers on the third. Afterwards, the main goal will be to collect information on Sims through Get to Know, Ask about Career and Ask if Single. Since those interactions go away after they’ve been used up, Ask About Day can also be used, which while it doesn’t lead the game to log information, it allows your Sim to learn more from a storytelling perspective.

After the branch off, lots are no longer restricted and your Sim can be assigned to any lot in the world, including a hidden lot or one in Granite Falls. Diamond Agents have the same goals as they did previously but will also have romantic goals available as long as they’ve not married or in a committed relationship, in which case they won’t appear. Villains go around performing Mean interactions.

The Tech Guru career is all about programming… or just sitting around playing video games, depending on what branch you choose. Starting at level 8, Start-Up Entrepreneurs have a chance of receiving field work to Discuss Latest App at the lounge, and Gamers to Discuss Game Strategy, which will also take place as the lounge. Cooking, washing dishes and making coffee are available as minor goals early on.

Last but not least, the Writer career is about writing books or articles. After the branch off, Authors will focus on writing books, whereas Journalists will focus on writing articles. Authors have a chance of receiving field work at the Lounge to Discuss Favorite Author. Journalists will be sent out to interview Sims. Cooking, washing dishes and making coffee are available as minor goals early on.