Welcome to another Simmer Q&A, where we take time to introduce you to a Simmer and his/her work that you may have been unaware of. Today, we’re interviewing Julian / Iron Seagull, a dedicated Simmer and a devoted YouTuber. Let’s begin!

1) I know that you’ve been making YouTube Videos for quite some time. How did it all begin?

My channel has technically been around since 2009, but for years it was just a place for me to upload random videos whenever I felt like it. June 16, 2013 is what I consider to be the official start of my channel when I uploaded my first Sims let’s play called Dragon Valley Rivals. After watching other YouTubers like Quxxn and Andrew Arcade, I felt inspired and wanted to bring my own ideas to the YouTube side of the simming community. A big idea I had was to create a continuous storytelling universe for my sims that works just like what you see Marvel and DC doing with their movies and TV shows. That combined with the lovely feedback I’ve gotten from the community even back during those days when I didn’t upload on a consistent basis is what’s motivated me to continue. I’m getting very close to 6000 supporters, which is something I never thought I’d achieve! 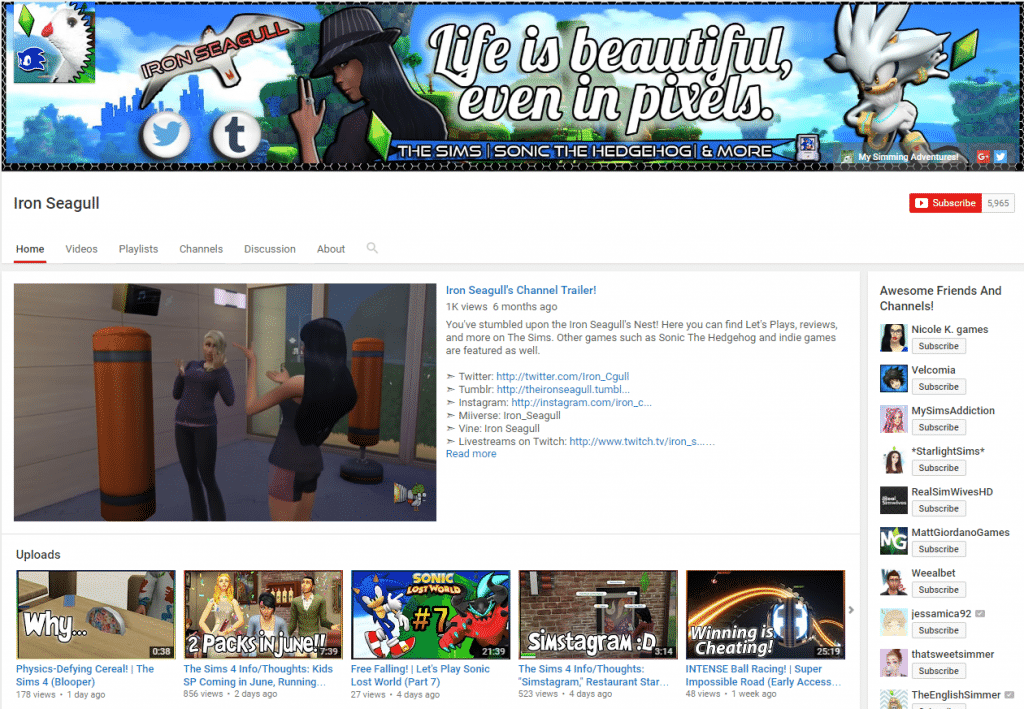 2) I’m a huge fan of your info/thoughts videos! How much time goes into creating one info/thought video?

I’m glad you like them! The process of Info/Thoughts videos are quite different from most of my content since I don’t record gameplay footage for them (though I occasionally throw in some of my own screenshots for the opinion sections). Instead, there’s more researching and screenshotting tweets from the SimGurus ha ha. These videos normally take about 1-2 hours total. Here’s an example of one from when the “Sims 4 Pets” survey was going around:

3) How much time a week do you dedicate to your YouTube channel?

Not sure of an exact number, roughly 14 hours I think. Some weeks I do more Info/Thoughts, some have more let’s plays, some are more focused on Lot Showcases or other content. It varies quite a bit. If you’d like to see my let’s play universe in chronological order, here’s the playlist! A lot of my spare time is spent on other games like Sonic The Hedgehog and hanging out with my girlfriend Ashleigh, who I fatefully met through this community! She even joins in on recording with me from time to time. Recently both of us have made a habit of getting more active through Wii Fit U, it’s surprisingly a lot of fun! I still need to work on getting the Tree yoga pose just right….

4) You’ve been simming for quite some time, right?

Yeah, almost since the beginning! I remember The Sims Hot Date was right around the corner when one of my childhood friends introduced me to the series. At first the game felt mostly like an RPG to me. Level up skills in different areas, move up in your career, make tons of money, and don’t die in the process. Then when one of my sims started riding a mechanical bull at a party was when I had a moment of clarity, that the game was also about the fun parts of life and not just level grinding. I got more hooked on The Sims with each game since.
Unleashed was by far my favourite pack for Sims 1, not just because of pets but also that the neighbourhoods became much bigger. Seasons was my favourite for Sims 2 because the weather was such a cool (no pun intended) breakthrough for the series. Seasons became my favourite again with Sims 3 because of the festivals and even better weather effects. No other Sims 3 pack comes close for me. With Sims 4, my favourites are both Outdoor Retreat and Get Together. I love doing outdoorsy stuff with my sims, and while I think Get Together was lacking in certain areas, it still affects our sims’ everyday lives pretty nicely. Plus, Windenburg in my opinion is by far the best world in Sims 4 so far.

5) What do you love in The Sims 4 and what do you want to see improved, upgraded or added?

There’s definitely quite a few things I love about The Sims 4. The art style is just what I wanted. The Gallery is a huge improvement over the Exchange. Having all worlds in every save has been instrumental to telling the continuos universe I mentioned earlier. CAS runs great. Game Packs are probably one of the best things to ever happen to the series. The soundtrack is really nice and the skills for the most part are really fun.

On the other hand, there’s still so much that I want to see added to the game. So much in fact, that I’ve started a series on my channel called My Sims 4 Wishlist. I hope to do at least 2 of these every month. There’s a very long text document on my computer full of ideas for possible wishlist videos that only gets longer every week, it’s pretty crazy! I really want to see cars return. I think even without as open a world as before, they work very well with storytelling. I think a Create A World tool needs to be made at some point. We got some amazing custom worlds in The Sims 3 and I’m constantly running out of space to place new lots in The Sims 4. A swimming skill could be really interesting especially if we got beach lots back, which is one of the next wishlist videos I have planned. Also, Ashleigh just yelled “TODDLERS!!!” Right, how could I possibly forget them? :P

6) Dine Out is coming in less than two weeks! What are you looking forward the most in this Game Pack?

I’m so excited for Dine Out! There was a wishlist video I put out this past New Years Eve about what I wanted to see for this game in 2016, and restaurants were at the top along with toddlers and cars. I long speculated that restaurants would be the next Game Pack, and it made me so happy when it was official. I’m most excited to just have proper restaurants for my sims to dine out at instead of relying on bars and cafes ha ha! It’s great to see that it’s possible to make a big variety of restaurants, I’m excited to see what will be shared on the Gallery! Maybe a rustic restaurant hosted by bears, or a sit-down pizza parlour?

Thank you for answering our questions Julian!

You can find Julian / Iron Seagull on the following Networks: