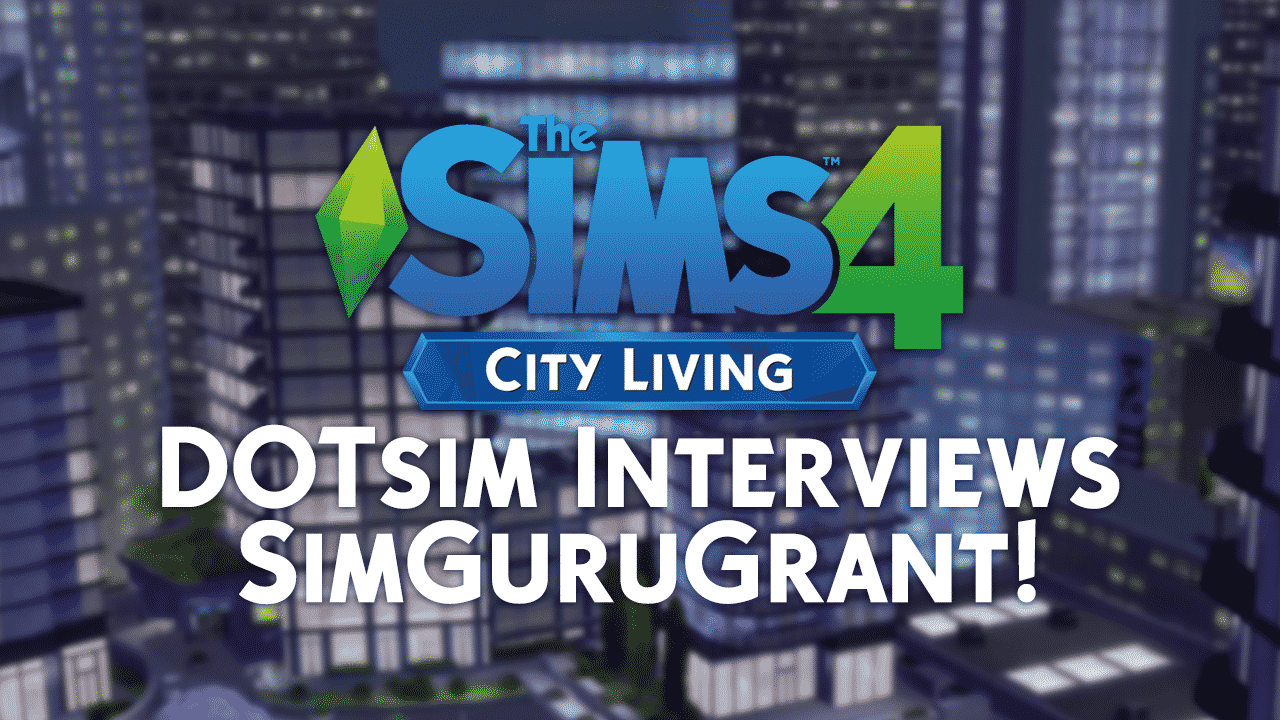 UPDATE: DOTsim provided a transcript from an audio recording by DefiFreakyBoo that was made during the interview with Grant’s exact words!

During The Sims 4 City Living Preview Event in Warsaw, Poland, DOTsim had an opportunity to interview Grant Rodiek about the game. Here are the most relevant questions and answers that were published:

Producer SimGuruGrant answered a few questions during the meeting with fans in Warsaw. Some of the questions concerned his experience with The Sims 3, and other approximate the news from The Sims 4 City Living. We have chosen the most interesting answers that may interest you.

That actually affects the game and we want to make sure it has a reason, it helps tell stories and has gameplay to it, and so it’s something we think about, but, I don’t know if and when we’ll do it. And just to follow up, I know this sounds like a typical producer answer type thing, but we’ve actually been thinking about things like that for years, and I know it seems to take forever for us to do stuff, we want to make sure that what we do is cool and its actually interesting. We don’t want to just add stuff to just to have it, we try to think through it and have a good reason to add it.

So, whenever we make a pack it always comes down to what we want to focus on, what we think we can do very well, and with the elevator, the elevator is actually one of the most complicated objects in The Sims 3, and it sort of scared us because one of the things is it has to both work with what we call shells which are the big structures in the buildings that we build stuff in, as well as it has to work with the build which is dynamic and the players can do it.

We have limited animation budget, and it was one of those things that we chose to spend our time on Karaoke, Video Games, and new interactions, and apartment situations, and we thought that that actually added game play that actually made it fun,  that actually added stories, whereas that elevators…its basically stairs, and so yes we knew that people would ask this and some people would be disappointed, but we though that the other stuff would more than make up for it.

Basically my entire job is, we look at what you guys talk about on the boards, we hear from our international partners about what you want, and we come up with 50 ideas for a pack, and then we can only do like 10 of them. And so we have to cut and not do all the other stuff, but then we think about, well we can still do that later, maybe. And then we have to think about when can we do it, what does the community want. What’s the right pack to do it with, and so, most of my job is that disappointing thing of figuring out what we get now, what we can maybe get later, and it’s always having to pick and choose. It’s like picking your favorite child.

So, first off obviously all the new stuff we add you can use for Get to Work so you can sell those new things, they work at retail. We have new club activities from Get Together, so we’re trying to make sure we have club activities for all of the different packs. We actually made the player lot traits what we call “carry forward” which means that the system will work in all packs, you don’t get all the content you only get some of the content, so if you get future or past games you can have those lot traits that you can apply to different things. Plus all the other things that are compatible, things like, groups so you can travel in groups and go to festivals together and do stuff together there. New interactions to make sure you can do those things together, the club activities. And then you’d be surprised how much time we spent on making sure ghosts can haunt everything, that the transformation ray can transform everything, that Aliens still work, and all those different things are compatible.

So in the past like with The Sims 3, we used to do two expansions at a time, and we…it’s been interesting…we as a team, like to have a little bit more time because it gives us time to try to polish, even just thinking more about the pack and not just developing it, but thinking more about it, doing more prototyping. Having more time to polish also means we don’t have to have so many people crunching all the time. It is a very interesting balance because we sometimes assume that people will get angry if we try to put out too much stuff but the sometimes people get angry if we don’t put out stuff fast enough. And we’re always trying to find the right mix to reach folks, but it has been really important in The Sims 4 that we make sure everything is really well supported, we want to release more polished packs, we’re trying to release more patches, and support the game with more content, and it seem crazy because most games end after just a few months but we’re two years on now. We’re going to keep going, we’re really trying to think about it and plan for the long term to make sure that it’s the right fit for the community and what you guys are looking for. So it’s weird because we’ve been doing it for so long, but we’re always learning new stuff to figure out what the market wants, what you guys want, and what’s the best way for us to develop it. I don’t have a good answer.

I work, so I live in San Franciso, and every day I drive an hour South, it’s 24 miles, so I guess like 50 or 60 kilometers. It takes an hour because traffic is terrible, but I work in Redwood City and the whole team is there, it’s about 200 of us, and we’re making more stuff than we ever have before, cause we’re working on Game Packs, Stuff Packs, we have a patch team, and then we have the expansion pack team. Plus we have prototype teams for the next stuff, like, it’s always weird because in my head I have to think about things that are coming, that I’ve been working on in the past, and what I’m working on now, and what I’m going to be working on for the next two years. But yea, I work out of Redwood City at the main headquarters.

I liked Ambitions a lot because it was different. We had not done active careers at that time, and it was very fun to make. I worked on the interior designer, I got to work on the private eye…if you guys remember the private eye with the bushes and then he hides behind them when he‘s watching people and then birds fly out? That is actually a guy from San Francisco, he’s called “The World Famous Bushman”. He’s a guy…he actually dies I think…but he hangs out down by the wharf, and then when tourists are walking, they’re like *tootooodooo* and he jumps out of it and freaks them out, so we put him in the game. But to play, I always love Seasons and Generations.

It’s been really interesting because like I said, I started a month out of college and I used to be a text writer. My very first job was writing the text for The Sims, and doing feature production work which is like “early stuff”. Now I’m more focused on the high level things and I got lots of assistant producers that report to me, and so I’m the old guy now and I used to be the young guy.

It’s interesting, we’re bigger now. I think some of our stuff can be more formal and that’s just do to the fact that we’re trying to get better about what we do. In the past sometimes we’d be a little wild wild west and kind of crazy. It’s really interesting because the community has changed, the software has changed, and its also gone from…back on The Sims 2, a lot of the stuff was still for the first time as the first 3D game, and in The Sims 3 we did a lot of stuff like Ambitions or World Adventure that we had never done before. Now in The Sims 4, we’re trying to figure out ways that, like, we give people your favorite stuff – cause people want Late Night and Apartments and Seasons and Pets and all these crazy things – and we have to figure out how do I do this stuff in a way that’s new and special and not just the same thing.

If we do the same things, we’ll go crazy and then you guys will get mad at us for doing the same thing. Althought, some people want us to do the same thing.There’s so many times where there are several of us who have been there for 10+ years, and one of my animation friends who is our animation director, he started off as an animation junior guy, and then modelers and engineers and stuff, and we’ve been talking about The Sims for so long and “people peeing” and we have arguments about how to use the restroom all the time, or how to have babies, and it’s like these really weird arguments that you have with the designers that I have been having for like 10 years now about some of the weirdest stuff.  It’s very strange.