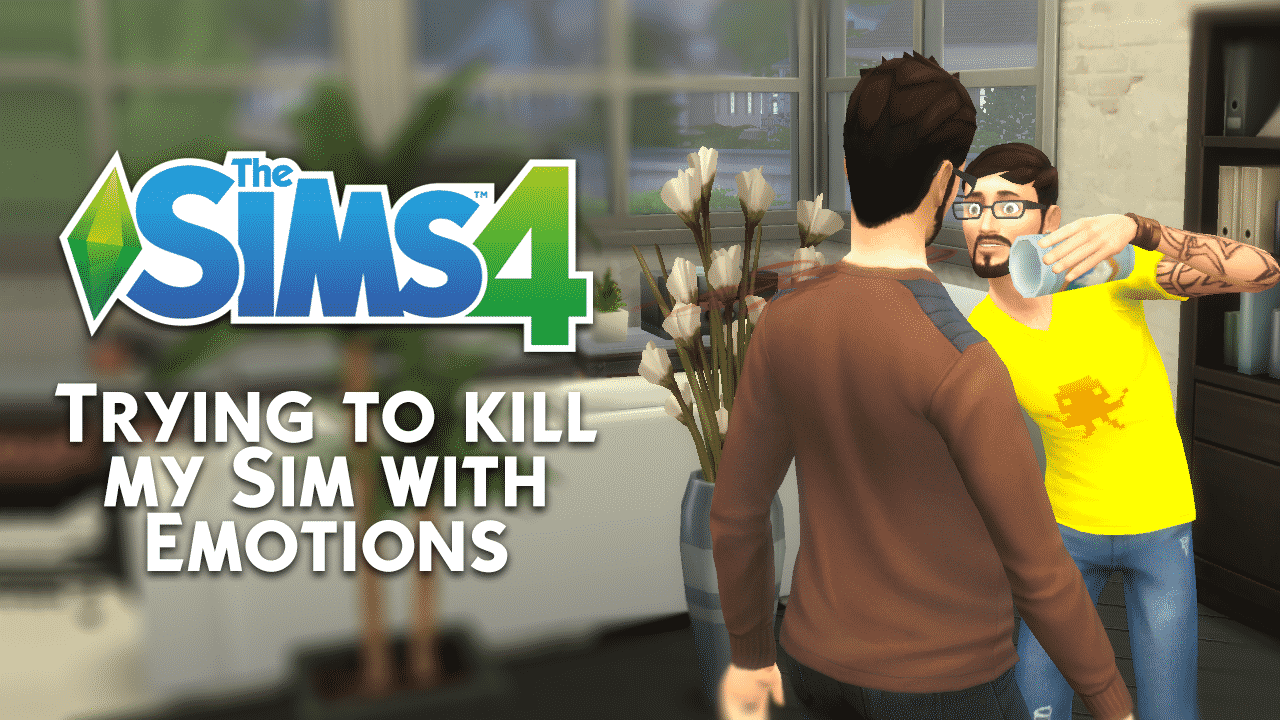 I’ve never gotten to a point where my Sims would die from strong emotions (death by anger, embarassment or laughter) because usually when I’m writing articles that involve such death causes I use cheats which boost emotions. However, this time around I’ll try to make my Sim die from an emotion without using any cheats.

For this article I’ll be trying to make my Sim die from anger. To make things easier for me I’ve made a Sim (Frank) with the Hot-Headed trait which should hopefully speed up the process. 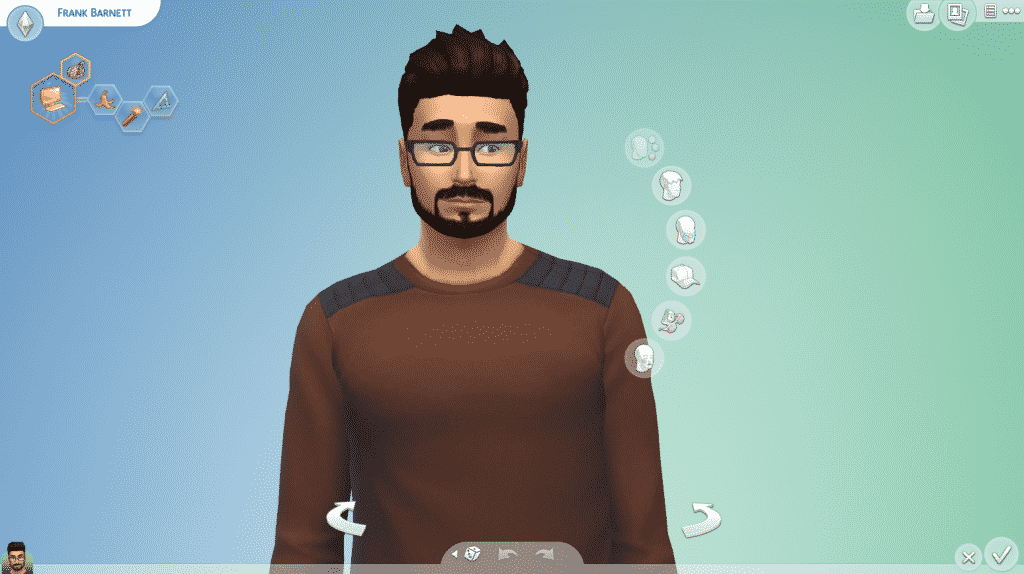 I think the easiest way to make Frank angry is through socialization with other Sims so I’ll be waiting for the welcome wagon to heat things up. 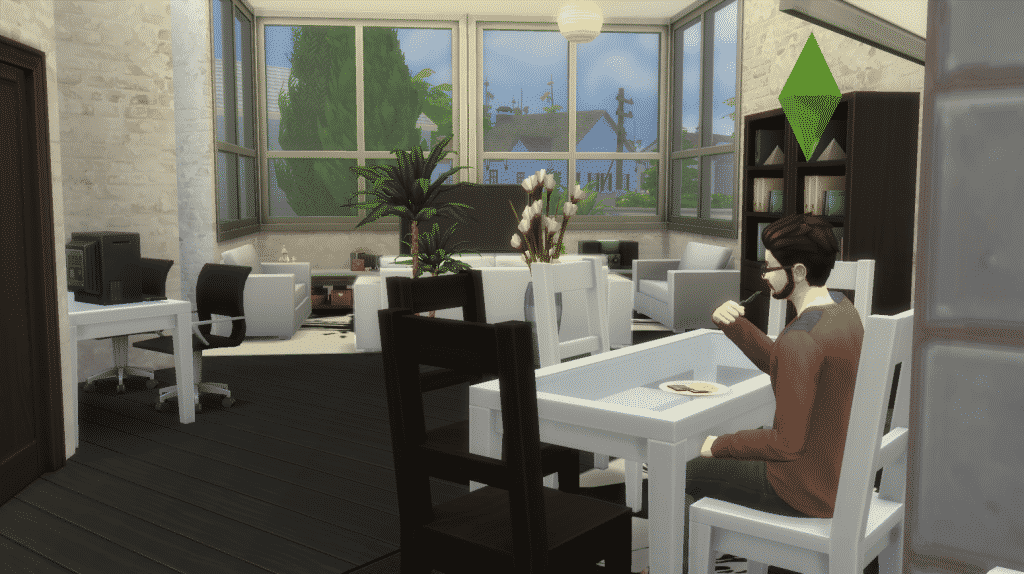 However, the welcome wagon didn’t show up for some odd reason so I had to go to the park and meet new people that my Sim will get angry at in the future.

I tried to be rude to the first Sim I saw in the park. However, that only made the Sim I was socializing with angry, not Frank who was just fine. 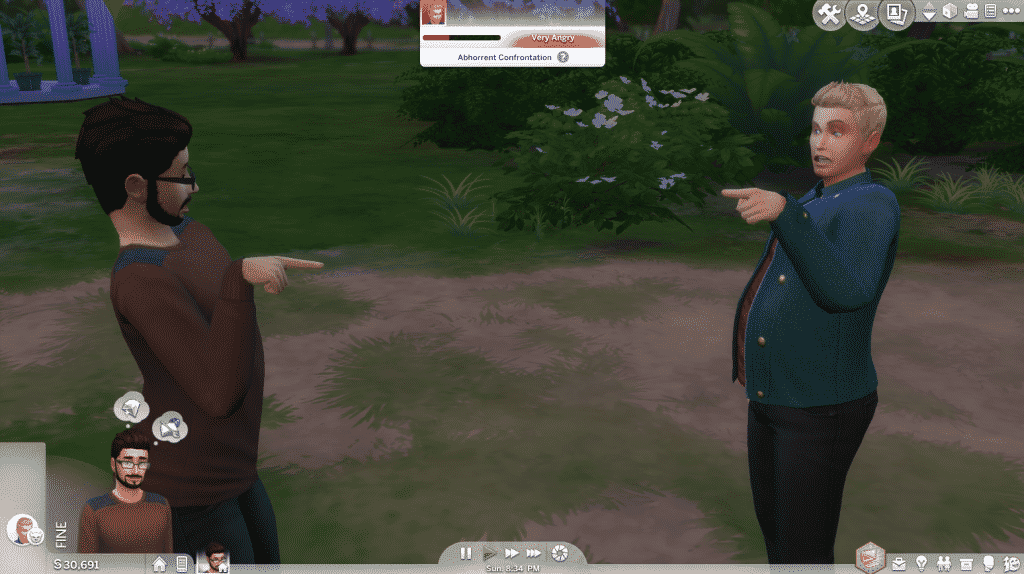 I was really surprised how hard it was to get my Sim angry other than the random angry moodlet which my Sim got from the Hot-Headed trait. Even that moodlet only lasted for 3 hours and didn’t have a strong effect on my Sim.

Maybe I’ll have better luck on the next day….

I couldn’t make Frank angry no matter what but I decided to give socialization another go. I went to the Rattlesnake Juice Bar in hope to meet new Sims that Frank could get angry at.

I tried to be rude towards Juliette but no matter what I do, Sims just don’t want to fight back and they quickly leave the conversation with anger. 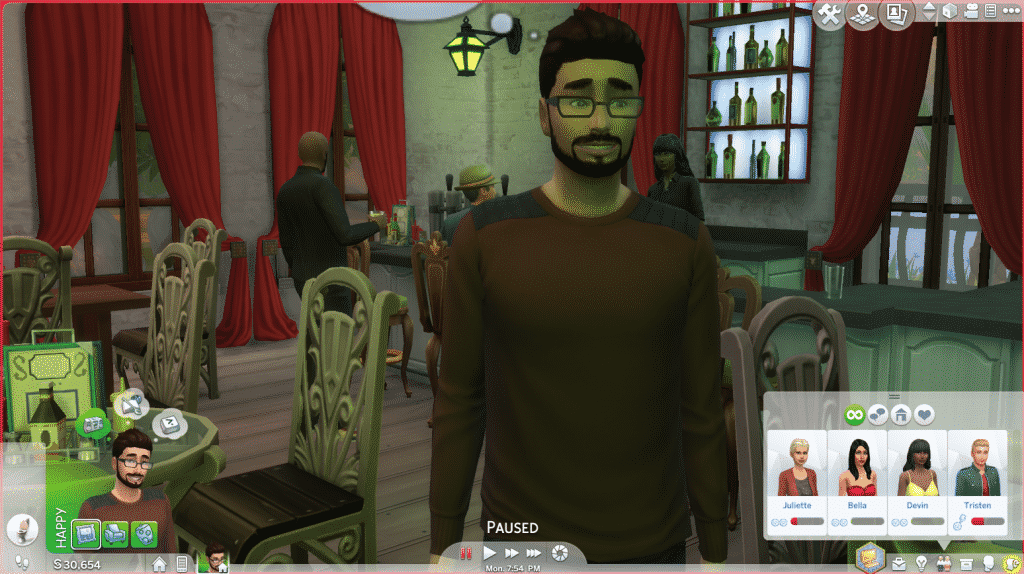 Quite Frank-ly (haha, get it??? okay, I should leave..) I realized while playing that the best way to make my Sim die from anger is not to live alone but live with another Sim who will keep provoking Frank day and night. I went to the gallery and added Andre DaSilva to my household – another Hot-Headed Sim. 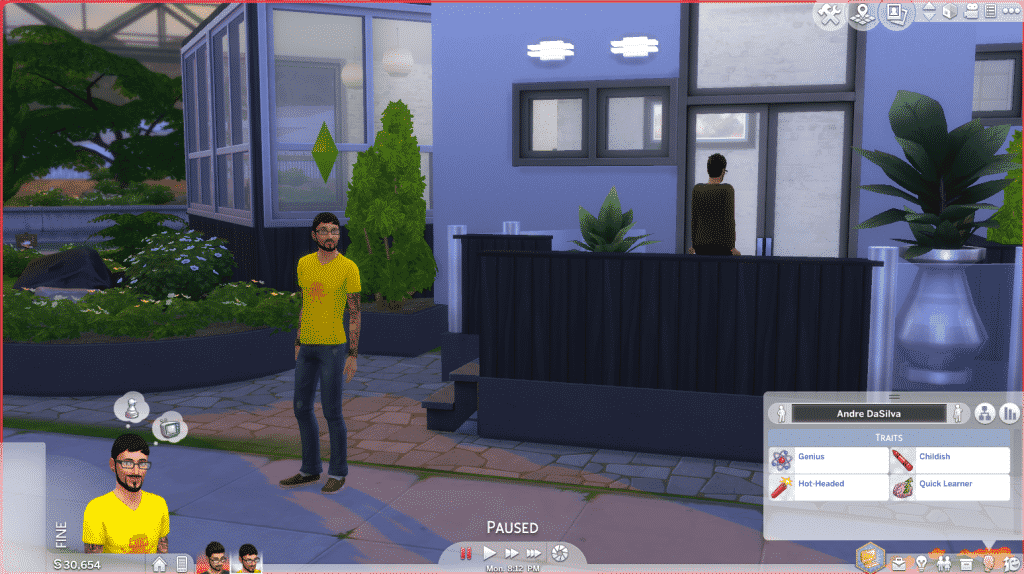 I tried to make Andre mean to Frank and it eventually worked – my Sim was finally angry! But, there are 2 more emotional levels to go through before my Sim can die from anger. To make his anger stronger I’ve made Frank do an angry painting which should emit an angry aura.

Thanks to the Hot-Headed Trait, Andre was able to rile up Frank which gave him another +2 angry moodlet, making him Very Angry. Let’s hope the angry painting will make him enraged. 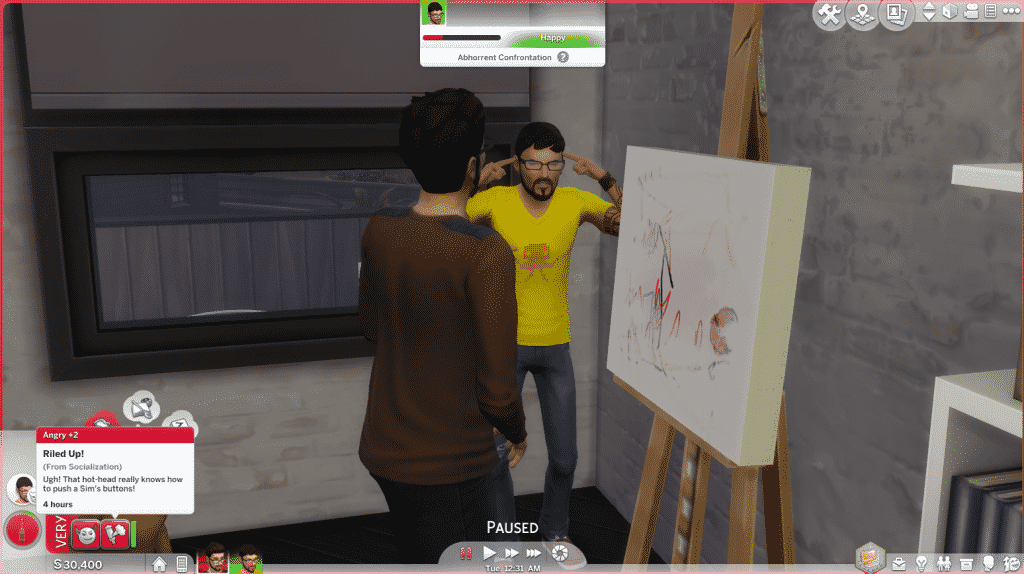 Frank’s painting skills were so bad that he didn’t manage to make an angry painting with good quality, making the emotional aura really weak. It took 2 angry paintings to get one +1 angry moodlet: 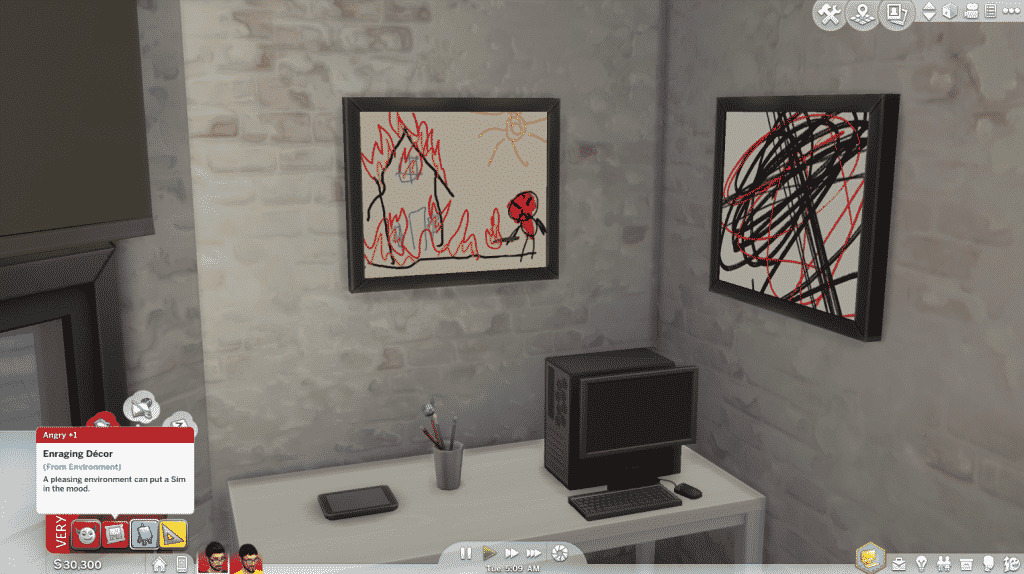 Because Andre was angry as well thanks to the paintings, he had access to new mean interactions which should hopefully make Frank even more angry: 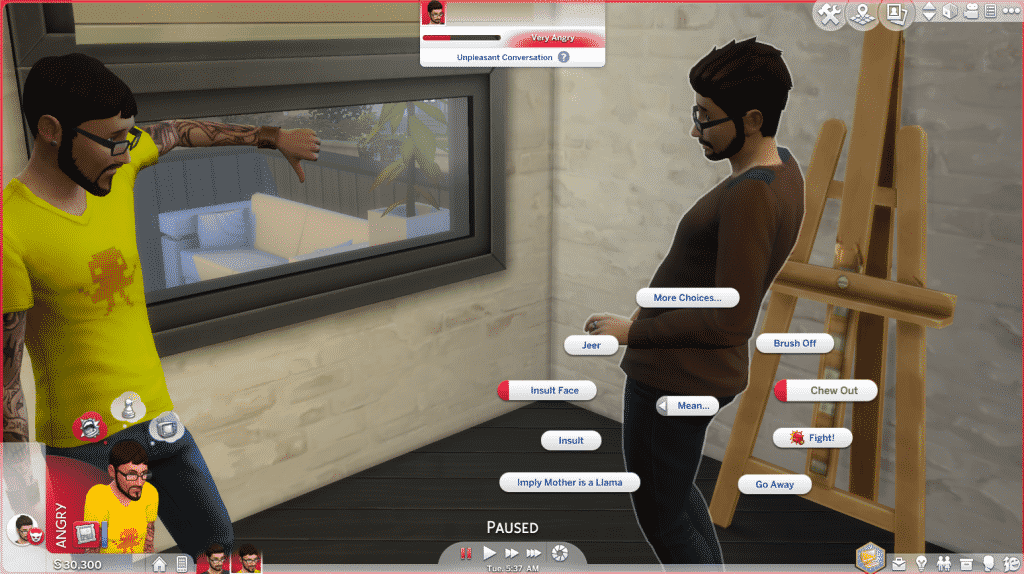 The interactions didn’t really help so I thought that the Fight option would be the best. I wish I didn’t do that as Frank lost the battle and the Dazed emotion was in full effect instead of Angry: 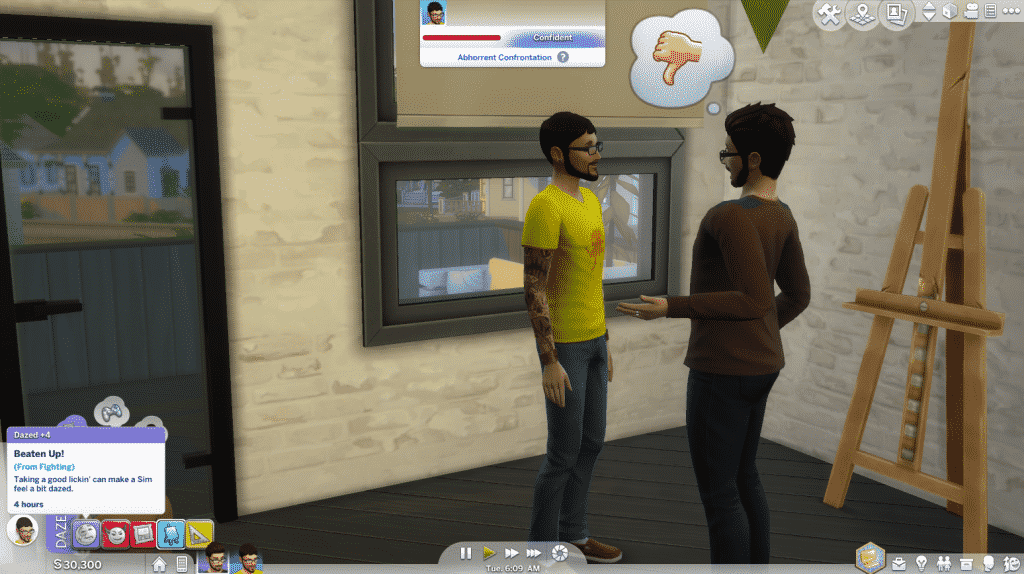 My Sims have been exchanging insults for almost a day without any significant results but I didn’t want to give up just yet. After the dazed emotion wore off I made Frank do another angry painting which didn’t result in anything. However, Andre declaring Frank as an enemy really helped a lot, giving Frank another +2 angry moodlet: 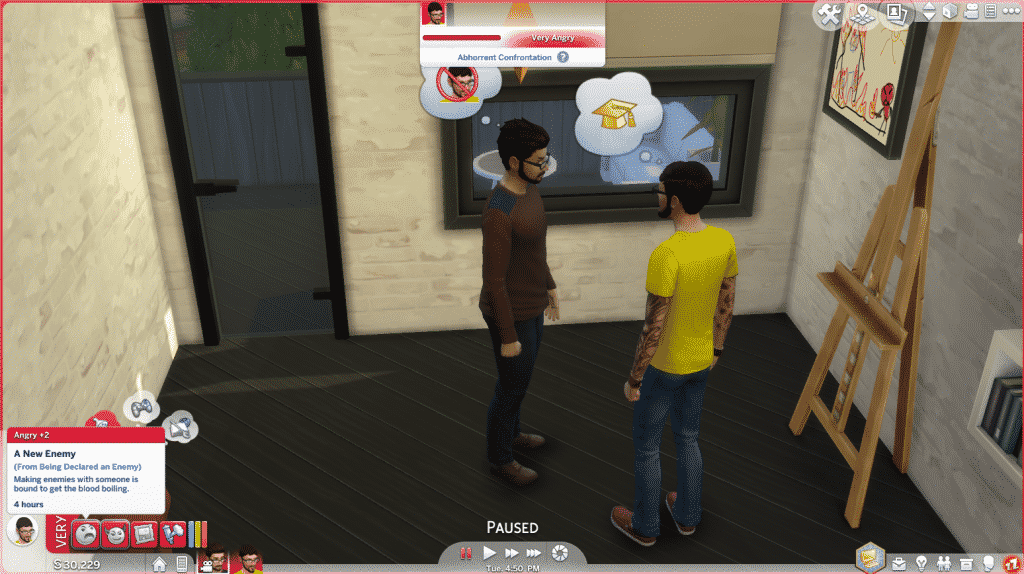 Whatever I did just wasn’t enough to reach the 3rd level of the angry emotion, so I tried the unthinkable.

I made Frank fall in love with Babs L’Amour, another Sim I’ve added to this household in order to succeed at killing Frank. I wanted to make things more extreme and have Babs and Frank marry each other, have Andre flirt on Babs and have Frank walk into the room during that scenario (really ambitious, right?) Thankfully this is The Sims so it should only take me about few hours to do that – or so I thought. I completely forgot the fact that Babs is Noncommittal which is why she rejected the proposal. That really hit Frank hard, making him very embarrassed. 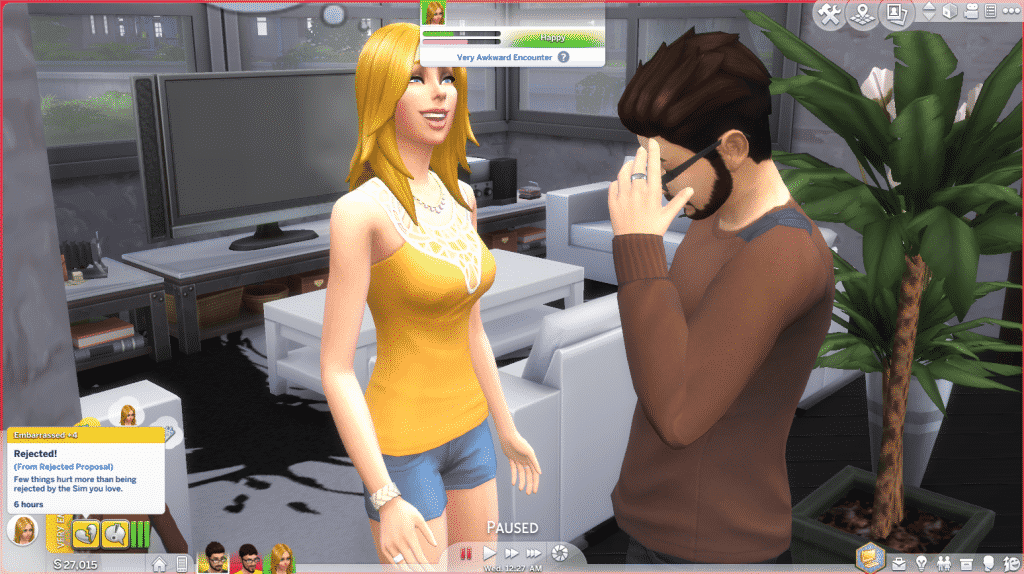 Seeing how strong the “Rejected!” moodlet is I’ve decided to kill Frank by mortification. It shouldn’t be too hard this time around….

I had to carefully prepare for this. I took care of all of Frank’s emotions except bladder. Then, I made him and Babs go to the park and try the proposal again, which failed of course. 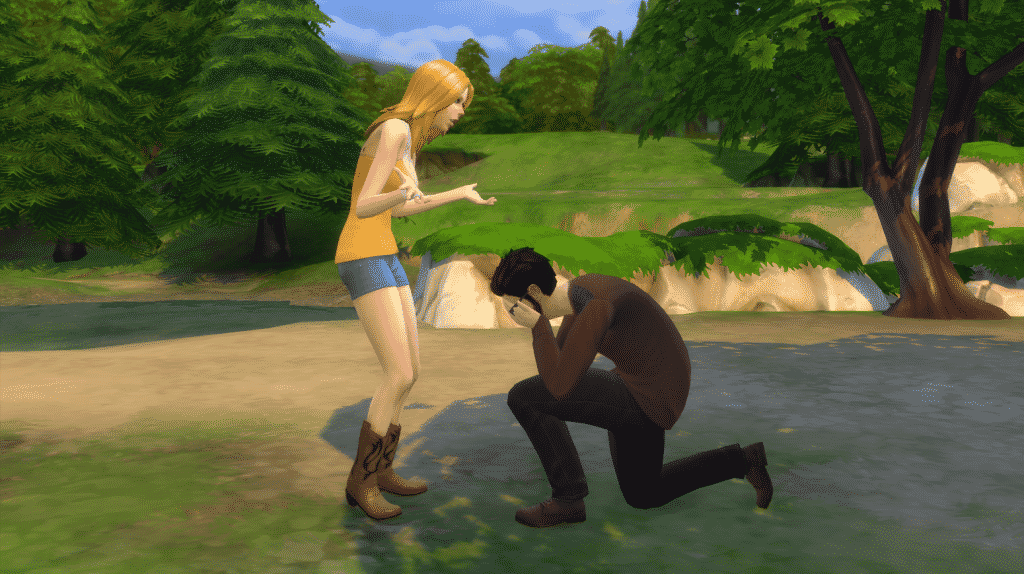 Then, just at the right time, my Sim’s bladder failed. 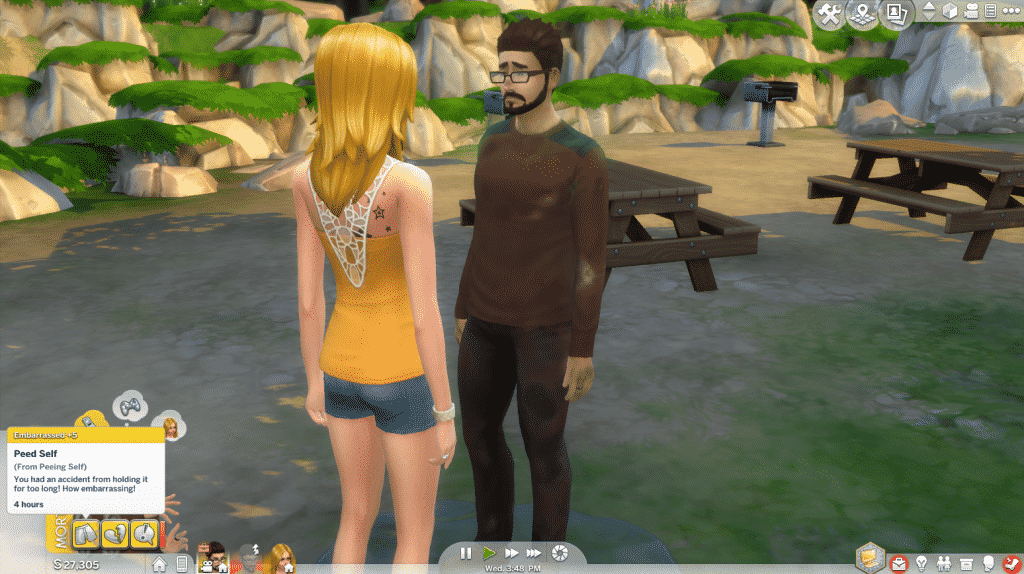 This is it – Frank finally reached the 3rd emotional level. He’s not dying from anger but at least my mission here to kill a Sim with an emotion is complete.

When it comes to trying to kill your Sim with anger, be patient. There are several reasons why I failed to kill my Sim with anger:

Still, this story is over and Babs and Andre ended up getting together.

And they lived happily ever after… (except poor Frank) 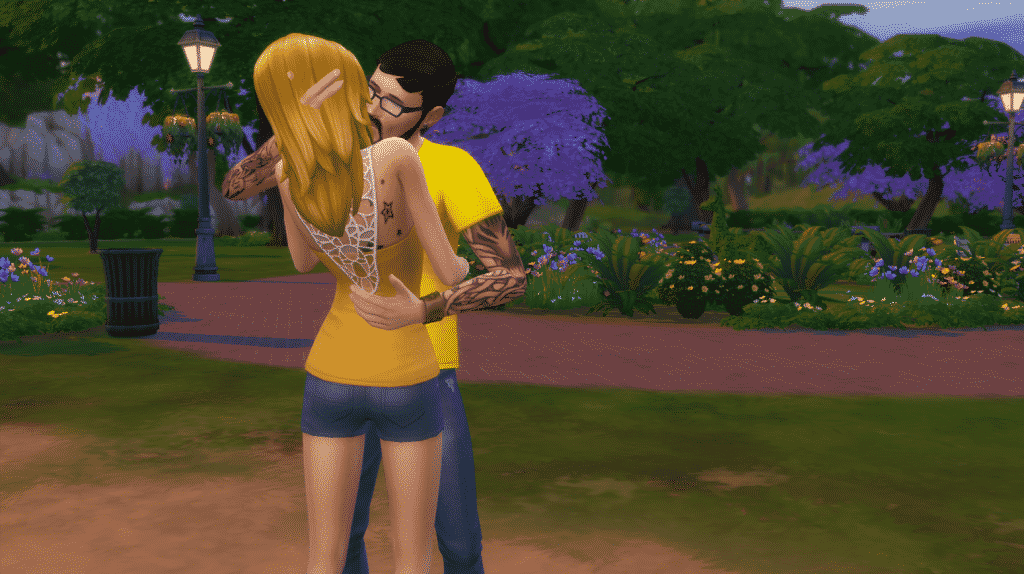