Hi, I’m Jason Sterling and recently I did an article outlining some of my favorite build contests on the Sims Forum. I decided to join the Build-n-Share (BnS) #85 contest for the Sims 4 ending on January 10th 2018 and chronicle my build for it here. As always, I hope you’re inspired by what you see and read but even more so I hope you’ll be encouraged to join up with a contest yourself in the future. The first three articles will follow my build. The final article will showcase all the entries from the contest. This second article in the series is about the interiors.

My power plant is in the kitchen so I finished it before looking at the rest of the house. I need to tackle the tricky annex part of the floor plan and that’s next. I also needed to test most everything in the room starting with the harvestables first. Which is my first, second and third advice- Test. I test constantly and there are still mistakes from time to time. 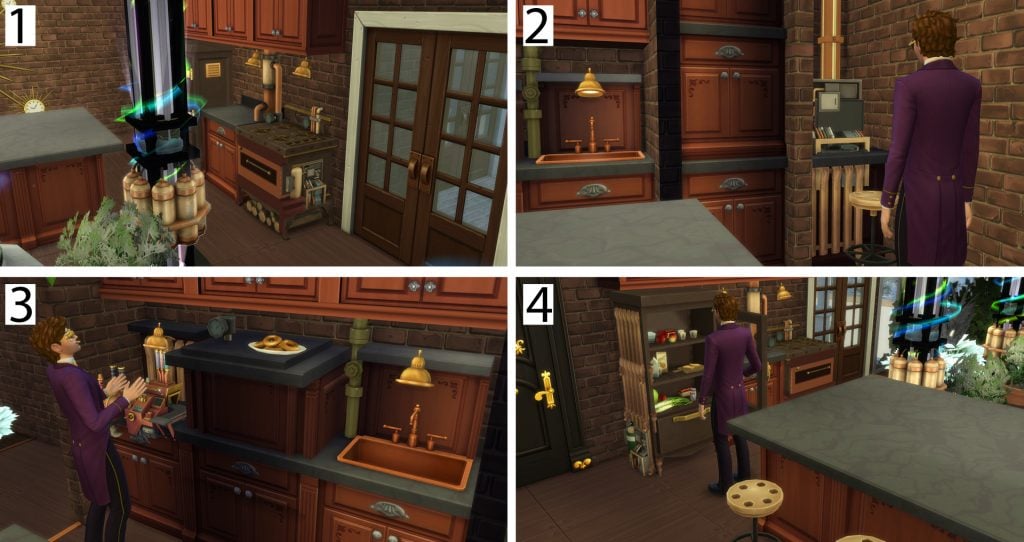 The Futurists Club (The Annex Space on the floor plan):

The Annex space was my biggest question in regard to the floor plan. It has a separate entrance and it must contain a bedroom. I had several ideas like a “Granny Flat” or an “Income Generating Unit”. I wanted my inspiration item, the coffee pot (it’s really a tea pot but it looks like a coffee pot)  to figure in it directly. So, I REALLY considered a home business. I thought of creating a neighborhood coffee shop with maybe a ground coffee by mail type of business combined in it. My end result is a good example of the flow of thought reaching a destination. If you have several ideas think about them all and how they can work together. If you don’t have an immediate conclusion then walk away and think about it. Or better, just start building one of your ideas at random and see how it evolves. 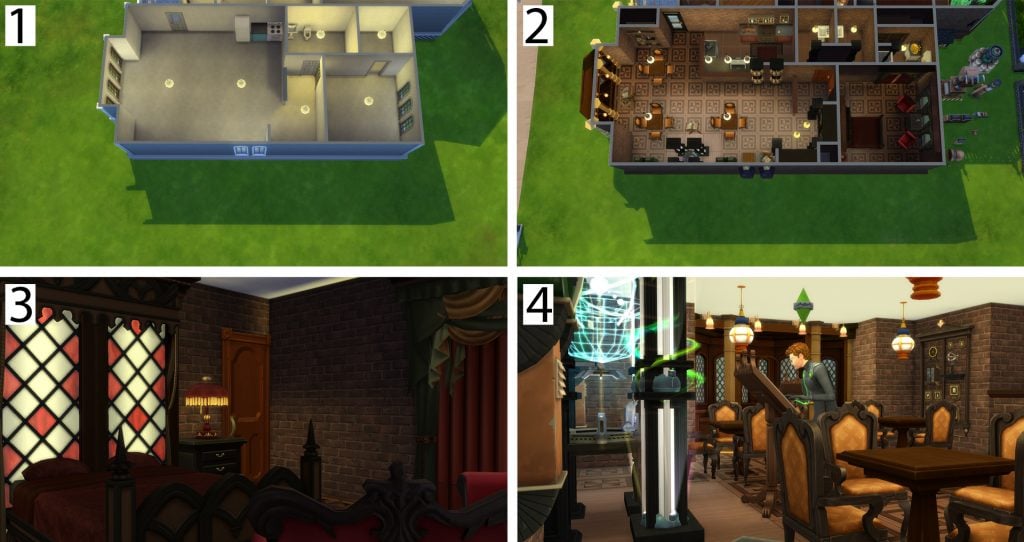 I decided to create and add an additional sim to David’s household. If you’re like me you can feel a certain attachment to any sim you take a hand in creating. For David’s son, David Jr. I tried to think of how I’d design a nursery if the constraints of the real world were not present… and if I were a genius scientist that can whip up solutions out of thin air- lol. 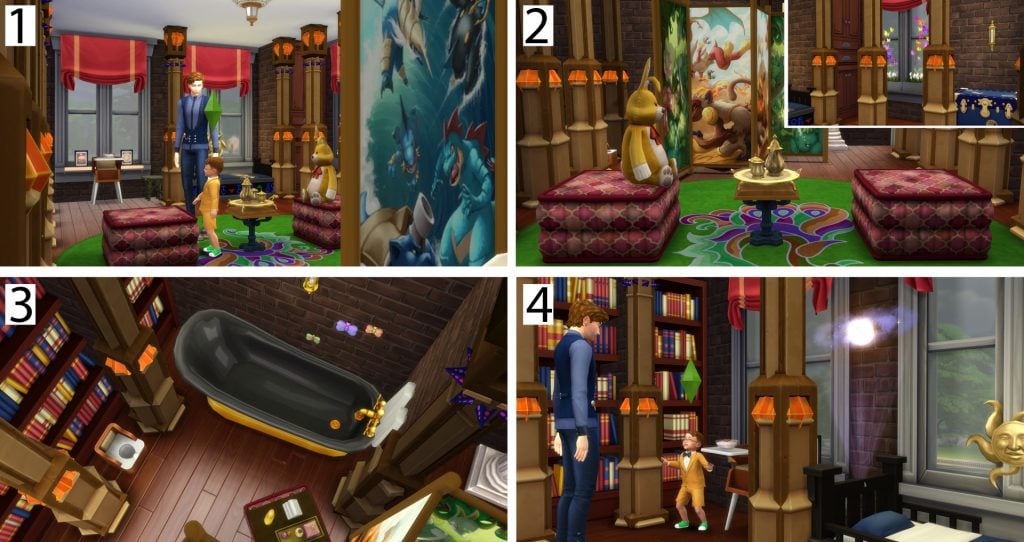 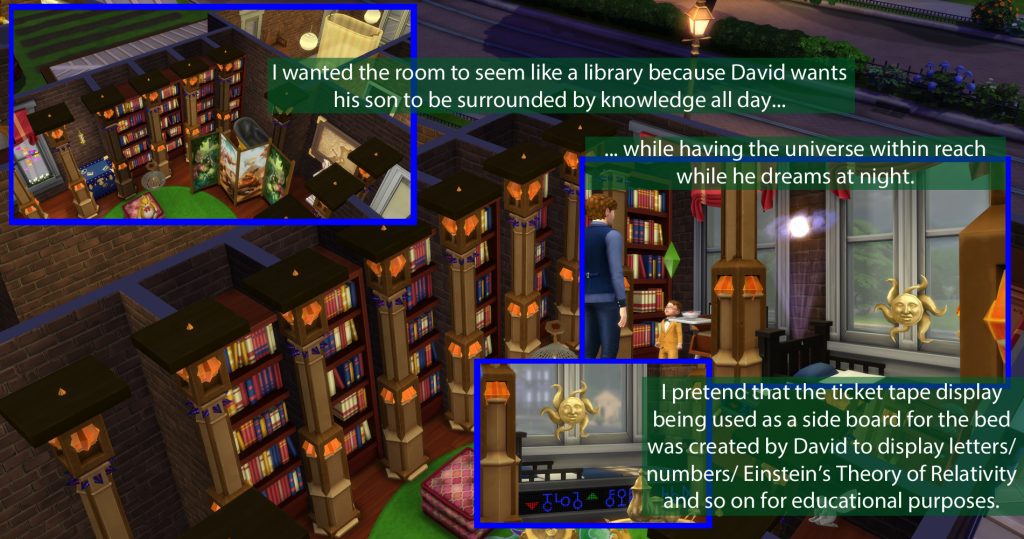 Much of the Rest:

The house is a large space. There are four bedrooms and three and a half baths to start, along with a large kitchen and entry hall, living, dining, library and the Annex. I’ve sampled some of the other rooms below. The object I chose for inspiration is black with gold accents. So, I decided to keep the decor darker- blacks and gold with white as an accent to raise the mood and tie in the windows and doors which really only worked in white. 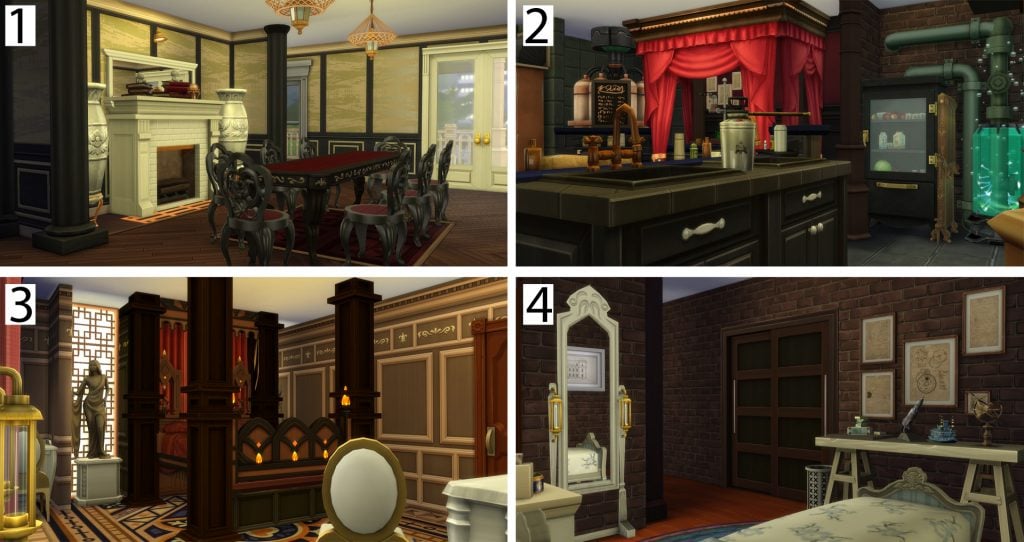 Thanks for reading! I hope you enjoyed this article. Please use it and your imagination for inspiration in your builds. You can see me on Twitch Channel: https://www.twitch.tv/jasonanthonysterling and Follow along on Twitter: @JasonSterling70