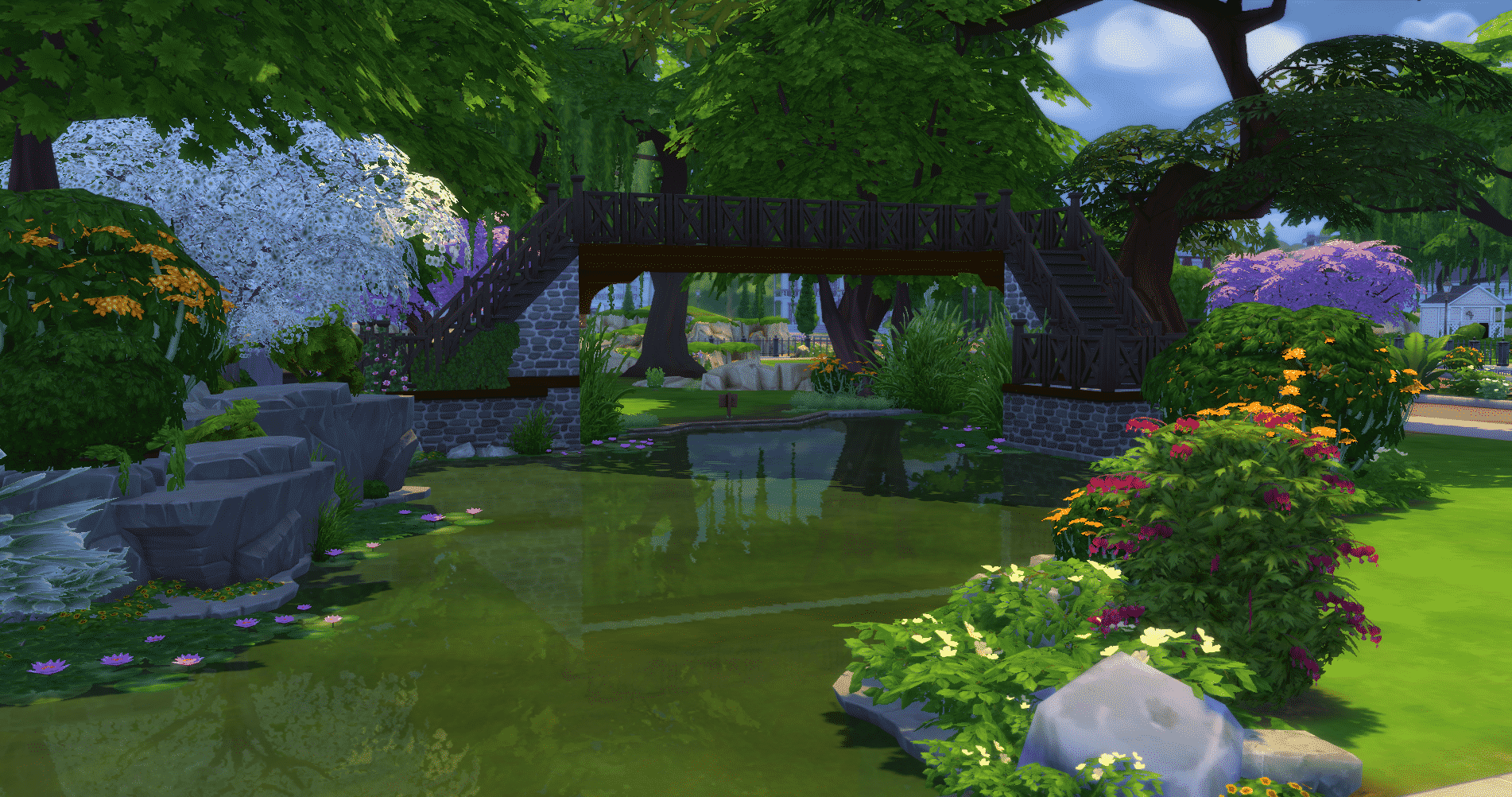 Hi, I’m Jason Sterling. Everyone who designs a structure within the Sims game is an architect. Whether you consider your work good or bad, simple or elegant, experienced or novice you are still an architect. This series of articles will highlight individual architects from the past. Landscape architecture has long been recognized as ranking in importance with brick and mortar buildings. Frederick Law Olmsted is widely regarded as the American father of park design and architecture. You can read about him in this article.  You can also learn to create a laundromat using his principles and the new Laundry Day Stuff pack.

The brief tutorial during this article uses cheats from the following list:

Frederick Law Olmsted (April 26, 1822 – August 28, 1903) was an American landscape architect, journalist, social critic, and public administrator. He is popularly considered to be the father of American landscape architecture. Olmsted was famous for co-designing many well-known urban parks with his senior partner Calvert Vaux, including Central Park in New York City, Golden Gate Park in San Francisco and Elm Park in Worchester, Massachusetts considered by many to be the first municipal park in America…

…His work, especially in Central Park in New York City, set a standard of excellence that continues to influence landscape architecture in the United States. He was an early and important activist in the conservation movement, including work at Niagara Falls; the Adirondack region of upstate New York; and the National Park system; and though little known, played a major role in organizing and providing medical services to the Union Army in the Civil War.  (Information Quoted From the Entry on Olmsted at Wikipedia: Olmsted)

Someone once told me that every town in America, no matter how small, has a public park and I believe they are very nearly correct. I believe that much of America’s park heritage can be traced back to the efforts of Olmsted. Olmsted believed firmly in the pastoral and picturesque style of park design with a focus on nature and the natural elements of the space. Large lawns and indistinct boundaries created via natural elements are hallmarks of his designs. Everything was designed so as to blend rather than stick out with an ultimate eye to relaxation.

The pictures below show four examples of his work: #1 Central Park, New York City / #2 Elm Park, Worchester / #3 Forest Park, Springfield, Massachusettes / #4 Golden Gate Park, San Francisco  The first two examples look very true to the Olmsted idea while the third picture and fourth picture feel updated. While both the concrete walkway and and Pagoda feels somewhat different than what one first envisions with Olmsted the structures do blend well with the space and do not feel out of place. All the pictures will speak to the tutorial example below. 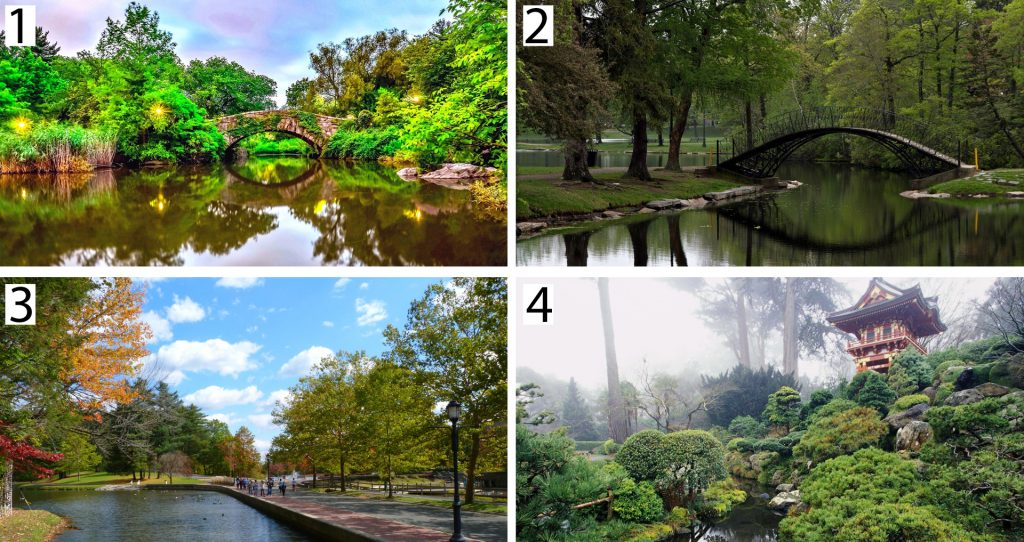 Being the Landscape Architect- Olmsted:

Building a strictly Olmstedian park of trails, ponds, lawns and trees would be unusual today in the real world where we tend to cluster the objects necessary for public recreation in community parks. As such it’s a rarity in the Sims as well. Not to mention we don’t have true bridges in the game- lol. However, you can use his principles of natural landscape, blending utilities and avoiding objects calling direct attention to themselves effectively in game. There’s not much to writing a tutorial for building a natural park, despite the importance of Olmstead to the discipline as a whole. None the less, I’ve included a brief outline below with some hints and tips. 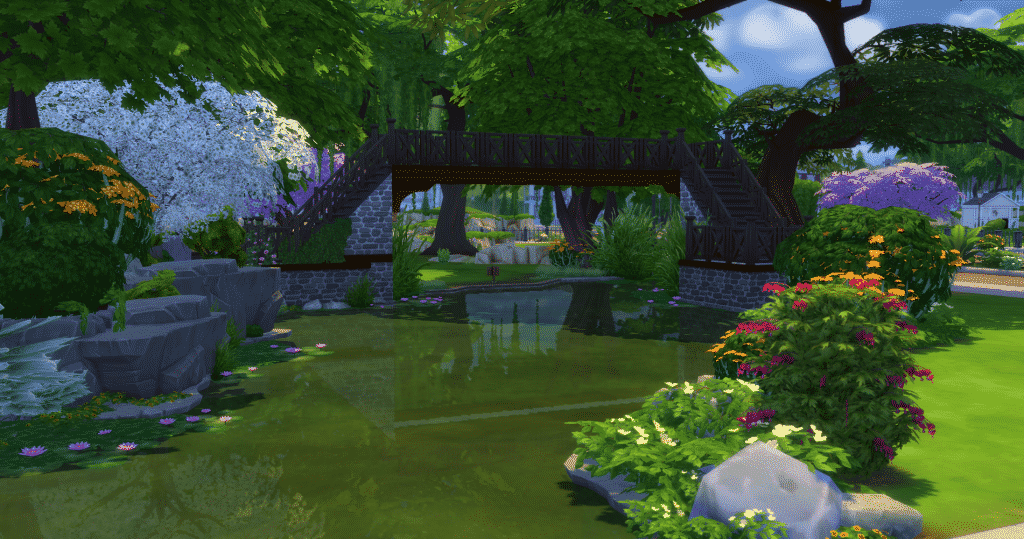 When creating an Olmstead park I start with a central, natural water feature. Then, I build a bridge spanning it.  I try to keep the bridge natural and somewhat simple so that it does not compete with the elements of nature. To the right side you can just see a bit of the lawn. A broad expense of lawn is also typical of the Olmsted Style. Most parks have natural rises and falls. I’ve created this effect of the left side of the river. 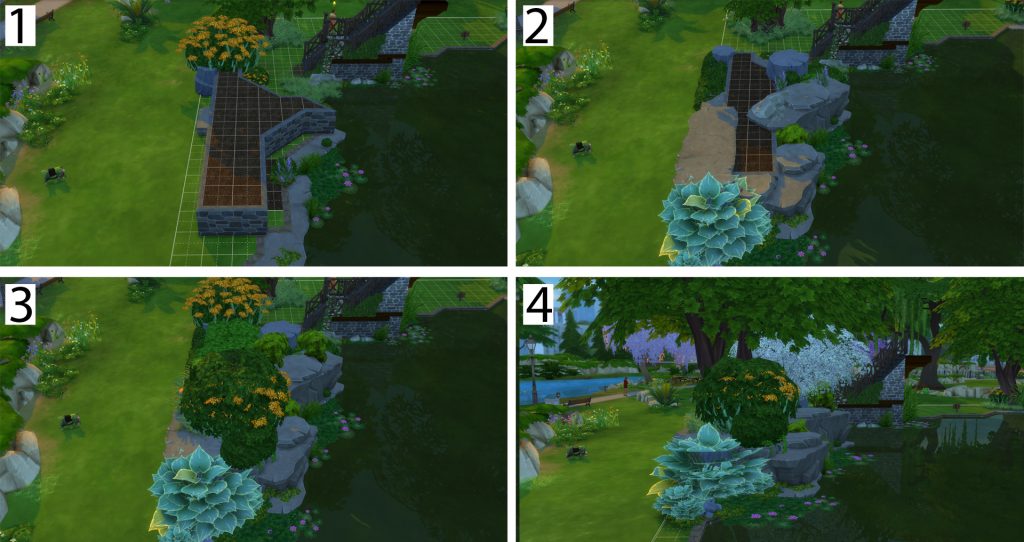 Being the Laundromat Architect- Olmsted:

You may say to yourself but Jason I don’t want a place to just walk around aimlessly enjoying nature. I want something to do! Well, thanks to the new Laundry Day Stuff pack we can create the perfect away from home experience while holding true to the period of the architect. Olmsted also held the lesser known position of Executive Secretary of the U.S. Sanitary Commission in addition to designing parks. As such it’s not hard to imagine a frustrated Olmsted bent over his desk hard at work designing a Laundromat for the 19th century woman to help her with sanitation. When it comes to creating a 19th century laundromat it’s important to carefully attend to the details of the period. You can see mapped out below some of the differences but more important the similarities with today. 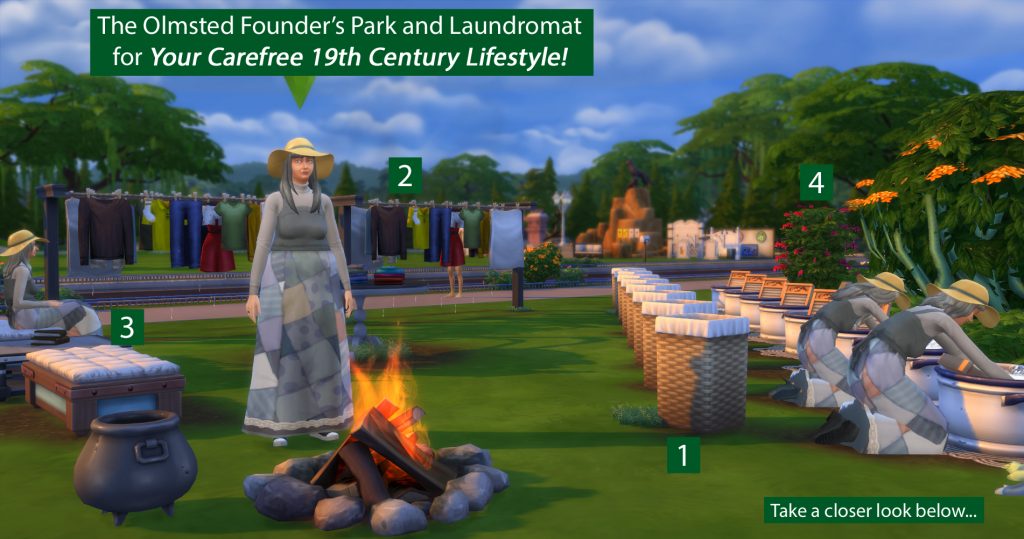 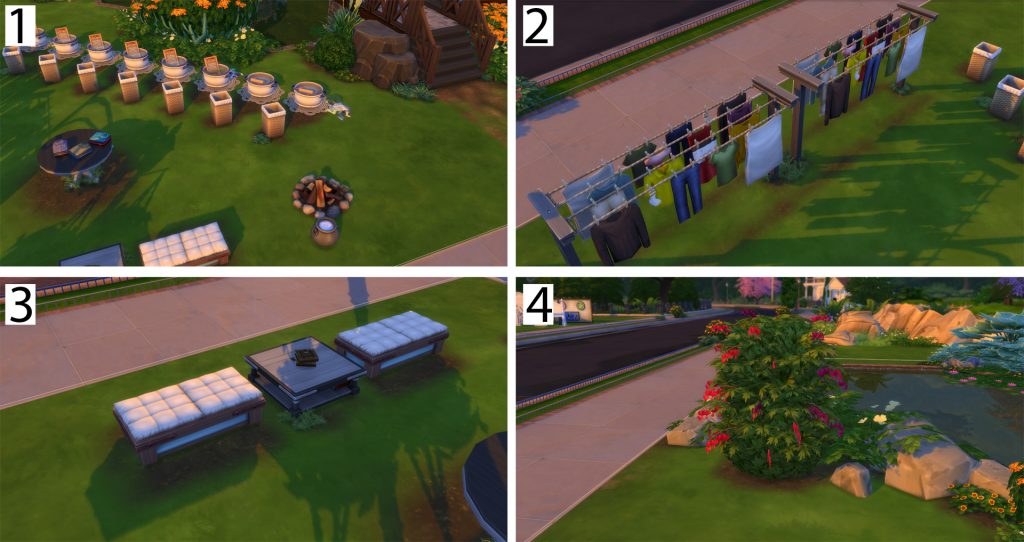 Lastly, let’s have an unvarnished review of our 19th century –eco friendly– laundromat from a Man of the 21st Century! 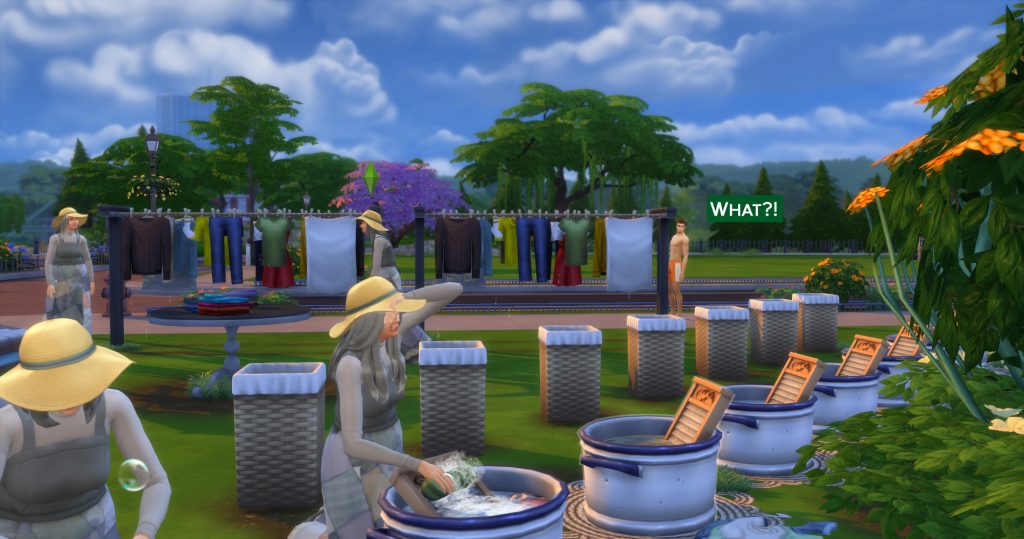 Thanks for reading! I hope you enjoyed this article. Please use it and your imagination for inspiration in your builds. You can find the Olmsted Park and Laundry on the Gallery: Gallery Link You can see me on Twitch Channel: JasonAnthonySterling and Follow along on Twitter: JasonSterling70