EA Play 2019 is a huge gaming event held by Electronic Arts in Hollywood, Los Angeles this June where players will be able to get their hands on new experiences, participate in Dev Talks and various Interactive Experiences and more!

EA has also released their brand new EA Play app where you can keep track of all of the events that will happen during EA Play.

Among all of that they’ve also included gaming franchises that will be present during EA Play 2019. Among other video games that they’ve listed The Sims 4 is also going to be one of the games that you’ll be able to get your hands on in the Fan Fest area: 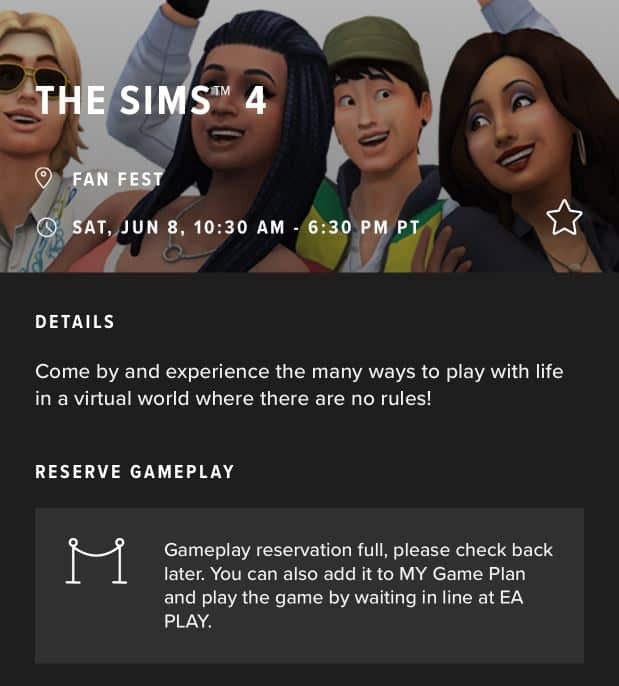 The game is going to be playable from 10:30AM to 6:30PM PT, both June 8th and June 9th. You’re currently not able to reserve your gameplay time but considering that the app has just been released.

What’s interesting is that the app hasn’t specified if The Sims 4 will have any new experiences or packs present during the Fan Fest as they’re keeping it all under wraps with a very short description of The Sims 4’s essence.

However, considering that they’re offering Gameplay Reservations for The Sims 4 booth it’s almost certain that there’s going to be something new offered on the event. Last year The Sims Team has also kept The Sims 4 under wraps before they announced the game in late May and stated that it’s going to be playable during EA Play 2018.

SimGuruLyndsay has also reassured players that The Sims 4 will be present at the event:

@TheSims will be there! https://t.co/BMVDpnWQGy

We also have a speculation post regarding that a new Expansion Pack for The Sims 4 could be released sometime in June – just when EA Play is taking place! Mix that with an official confirmation that a brand new Expansion Pack, Game Pack and Stuff Pack is coming to The Sims 4 in the following months and we’re almost completely assured that a new experience will be presented at EA Play 2019!