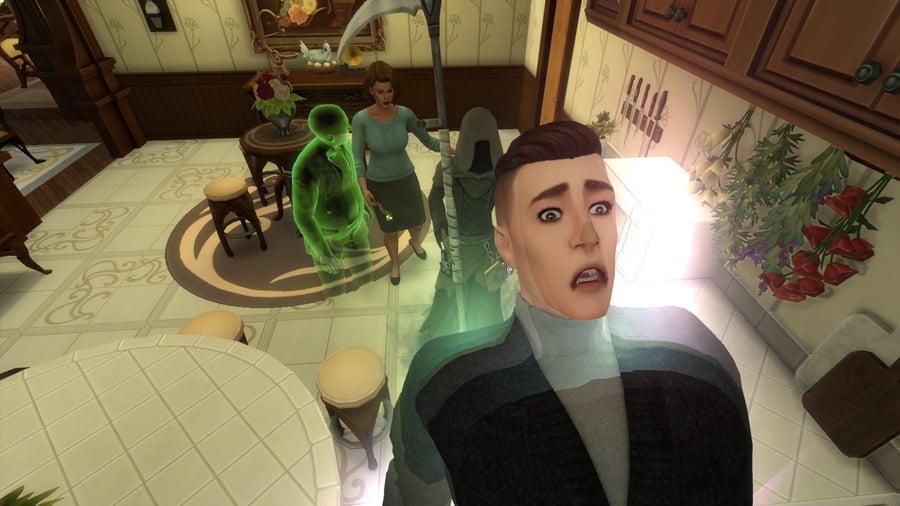 Since we are all stuck in our homes, I thought, what better time to write about gameplay ideas like this?

Have you ever heard of “I’m surrounded by idiots” challenge? Okay, now you heard! First thing first! I personally do not follow challenges or participate in them but this one captivated me somehow! I was really intrigued to figure out how my life would have turned out if I was a sim. Thus I made the Baegatark family, which is heavily based on my family in real life. It was really nice to have my mother back after years of longing. (R.I.P. mom 💔)

I did not follow all of the rules listed there. Actually, after some certain events, I had to cheat a lot. But this does not invalidate the points of this article. In the end, I followed the very fundamental rule:

And guess what? This challenge is simply impossible. 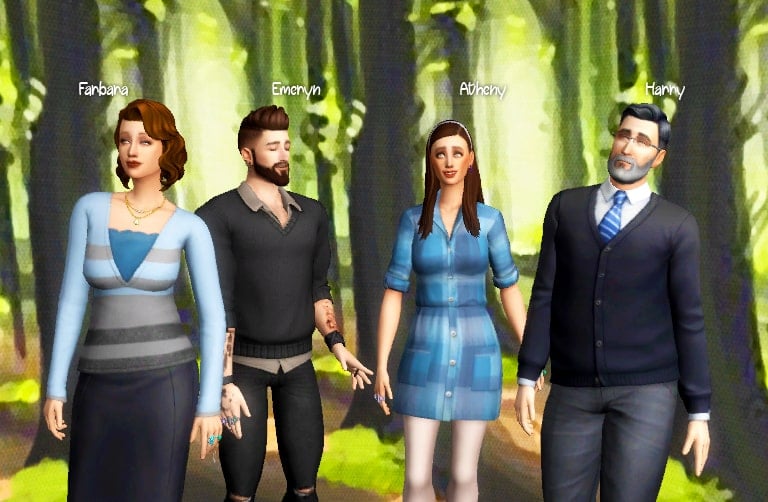 I have only controlled Emeryn, my sim-self. Now let’s go way back to his childhood and see all the traumas he had been through.

The sims are not aware of their fundamental needs. Ever heard of Maslow’s hierarchy of needs, EA? 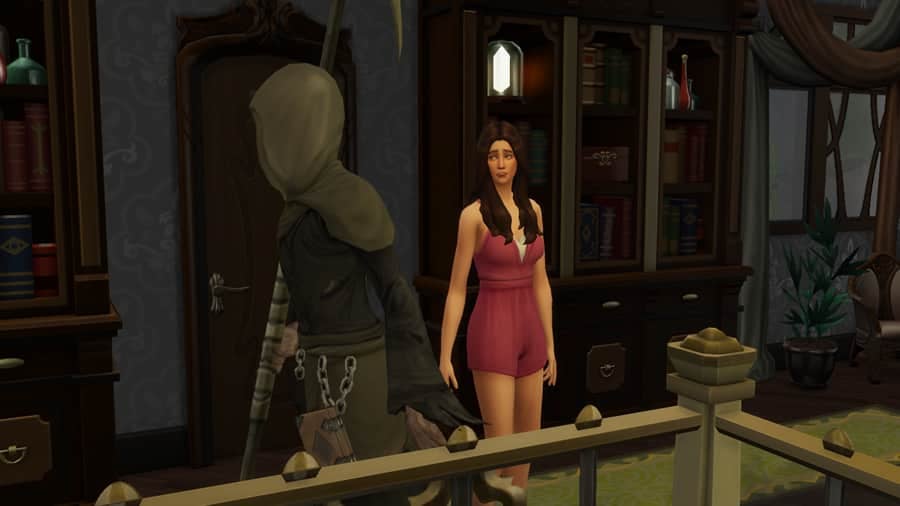 The first trouble I had to encounter was that the sims had almost no intellect. They almost always tend to prioritize other stuff like looking at the paintings than using the bathroom or eating. Harry, the father, died out of starvation on day 3. Yes. On day 3. This is a problem.

Yeah, the sims always had been light-hearted and hilarious, but, no. This game is supposed to be a life simulation. I should not need to babysit grown-ups in my game. Plumbella’s expert mode videos prove that another way around is possible. Like, in the sims 3, the sims are great on their own. Nobody dies out of starvation like this. Even in the sims 2, they are doing just fine.

The game does not acknowledge or represent the introverts. Lone Wolf trait is a lie! 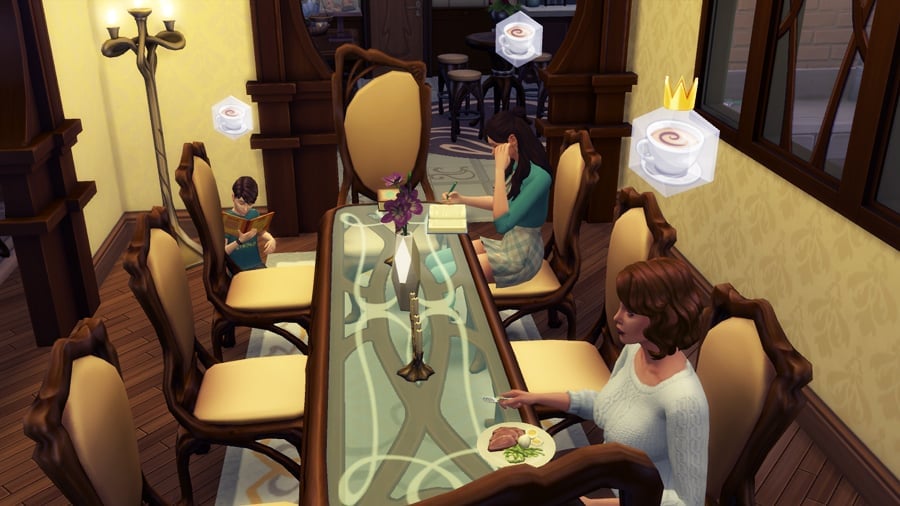 With Harry’s demise, I had to cope with the broken AI. So I decided to build a club and pick some useful activities to route the sims in the house. I did not break control 1 sim only rule just yet. It was useful, but again, it was not good enough. Even when doing homework or working on their skills, they gathered around each other and they decided to TALK instead of doing their job. It was a nightmare, trying so hard not to cancel their interactions because that would break the challenge (well, at least, my version of it). I had to test it on another family, with more useful traits like ‘Lone Wolf’. I am sorry to tell but it did not make any difference. It is almost like that the sims hate the concept of being an introvert or having no interest in unnecessary social interaction.

The level of clinginess is creepy. 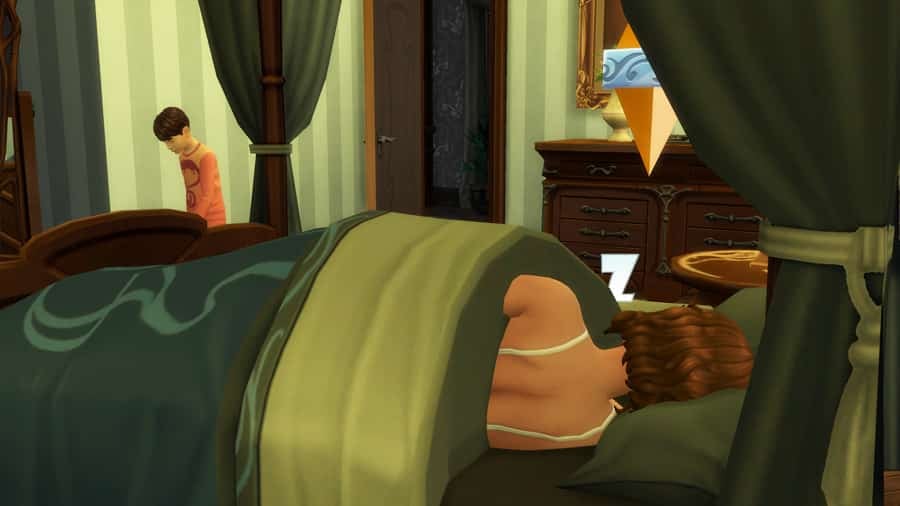 Okay, this is not actually a technical difficulty. It is just something I personally found annoying. Have you noticed that your sims tend to stick to each other to such an extent that they totally ignore personal space? They are so clingy and it gets creepy! Emeryn, the sim I controlled, ALWAYS ate his meals next to his mother or his sister. Yeah, it was cute until he decided to carry his plate from the kitchen downstairs to his mother’s bedroom upstairs and eat next to his mother’s bed while she sleeps… My mom would not really allow eating in the bedrooms, let alone munching to her ears when she sleeps!

Surviving as a child is an achievement. 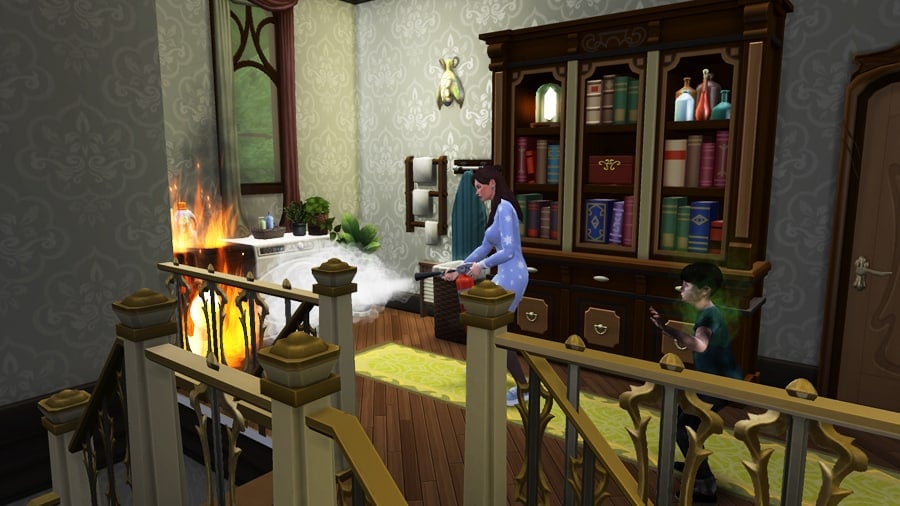 Every single time I tried to do something with my child sim, he started burning! It is not that inaccurate to my own childhood though, there was this one time when I was alone at home and I almost burned our house down while trying to cook some frozen meatballs, but Emeryn surpassed me on causing accidents and disasters even! He caused 6 fires in total until he became a young adult. It is probably because he was the only sim I decided to control so he had to do stuff on his own. Yeah, I can see the philosophy behind this decision, children are not supposed to cook or do dangerous stuff at home, but again, pushing one button of the washing machine shouldn’t really cause a fire. That is far too much!

Even if I almost burned our house once, I was a quite capable kid myself. I started cooking and cleaning around the age of 7 or 8, I actually enjoyed maintaining my own space, I would feel proud of myself when my mother told her friends that she did not even need to worry about my mess. Such a density on accident probability is actually misleading and discouraging. I firmly believe that it should be toned down!

Forming a coven is NOT a good idea! 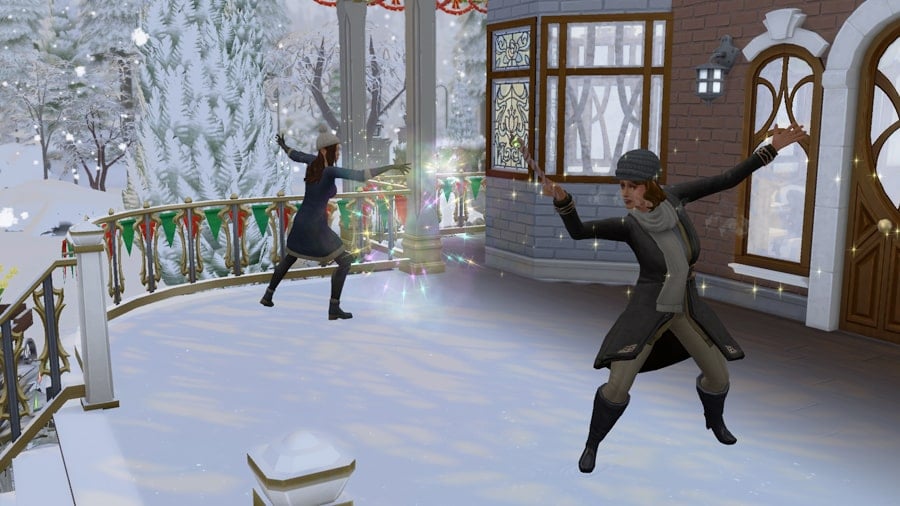 Baegatarks are a family of spellcasters (because why not) and I wanted them to level up in their witchcraft while I was going through this experience. I included “cast spells” in my club activities and I am telling you, do not do that! I have been there, done that so you do not need to try. If you think you could create a coven with the clubs of Get Together, you are wrong. The sims are so unintelligent, they start to “Inferniate” their own furniture. For some reason, they always prioritize “Inferniate” among all the spells and I had to remove that activity after trying for a while.

Emotions, the curse of our times! 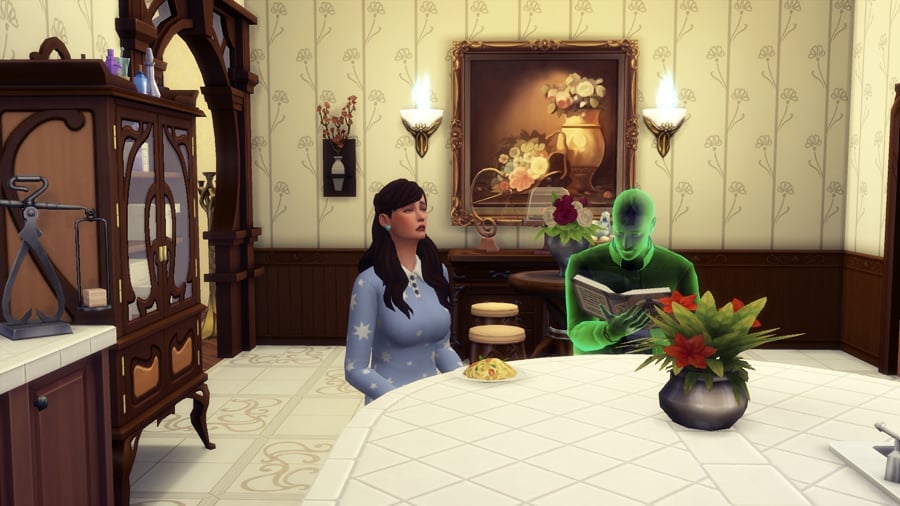 Aside from some no-brainer moments, I believe my biggest struggle was with the Emotions System. I would gladly trade this system with The Sims 3-style ‘moodlets’ or The Sims 2-style aspiration-meter. The emotions are so strong, they do not even allow sims to act appropriately to their personality. Yeah, I know, the sims 4 doesn’t really provide personality at all, but you know what I mean. This is how Harry died in the first place, he was overwhelmed by his emotions, he completely got out of reason. I believe the same applies to all of my struggles with this challenge. Long story short, the emotions system is just broken. I wish they put some effort into toning it down, making traits affect sims’ behavior and personality instead of their emotions. This is literally the curse of The Sims 4. I wonder when or if EA will admit that it was a HUGE mistake and change it with a better system before moving on to The Sims 5. A fix to the problem could be teaching our sims how to cope with their feelings. Like, if they get tense because of hunger, they should automatically go to eat. If they get disgusted by their surroundings, they should automatically start cleaning. This is as simple as that. Or we can just scrap the whole system, I would not mind at all. Give me back my TS3-style ‘moodlets’, that will suffice! Indeed, The Sims 4 offers a pure simulacrum, but it is not nice!

When did I break the challenge? 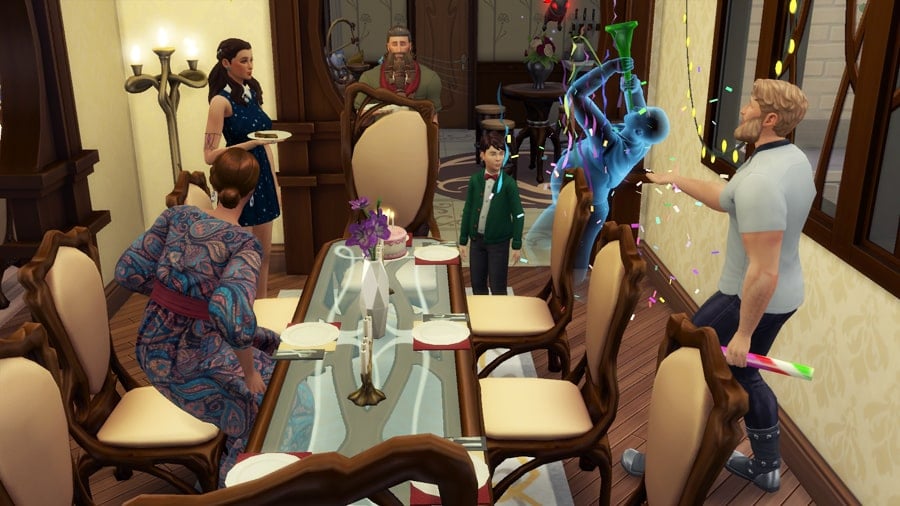 To me, the game is supposed to be fun, not a job. I would probably follow every single rule of the challenge if the sims were smart enough, if the gameplay was smooth and if the AI made sense. It became rather difficult to maintain the house with the ghost of the father haunting, with the big sister always ranting and raving, and with the mother spending days in her bed “crying it out”.

As soon as Emeryn became a teenager, I broke the challenge. I could not handle it anymore. I worked on Farbara’s witchcraft to resurrect Harry hence they could be happy together again. I worked on Atheny’s grades and she attended university so she could make some friends and get the life she deserved. And after spending a childhood full of accidents and traumas, I thought it would be fitting for Emeryn to let it all out in some artistic manners. He became an excellent artist!

Aside from the issues above, this challenge was quite fun! Have you tried this challenge yourself? What are your opinions on it? Feel free to share with us down in the comments!

I will leave some of my favorite screenshots from this long journey, I hope you will like them as much as I did. Thanks for reading this far! 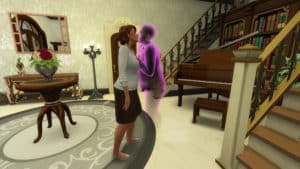 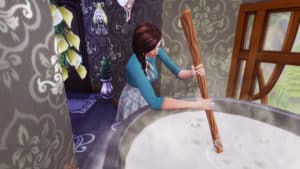 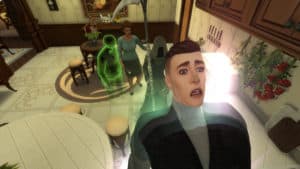 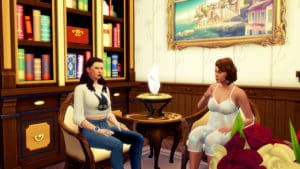 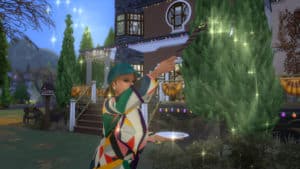 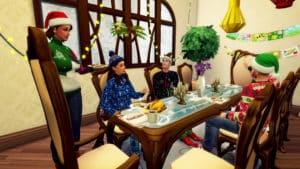