In keeping with my personal mission to take the Industrial Loft Kit as far away from the “grody old warehouse” vibe as possible, I came up with an idea so crazy, I couldn’t say no to it once I had thought of it. Had anyone tried to combine industrial warehouse with beachside living before? I wasn’t sure but maybe I could be the first.

The idea came to me while watching Motel Makeover on Netflix. It’s a new series that follows the journey of two middle-aged women entrepreneurs to turn a dilapidated motel in Sauble Beach, Ontario into a trendy beachside getaway that takes full advantage of Canada’s short summer season. While watching these two nauseatingly bubbly ladies cover every inch of this motel in patterned wallpaper, plastic plants, and tacky neon signs, I thought “What if I could transform this dark, dingy kit into something bright and cheerful?” 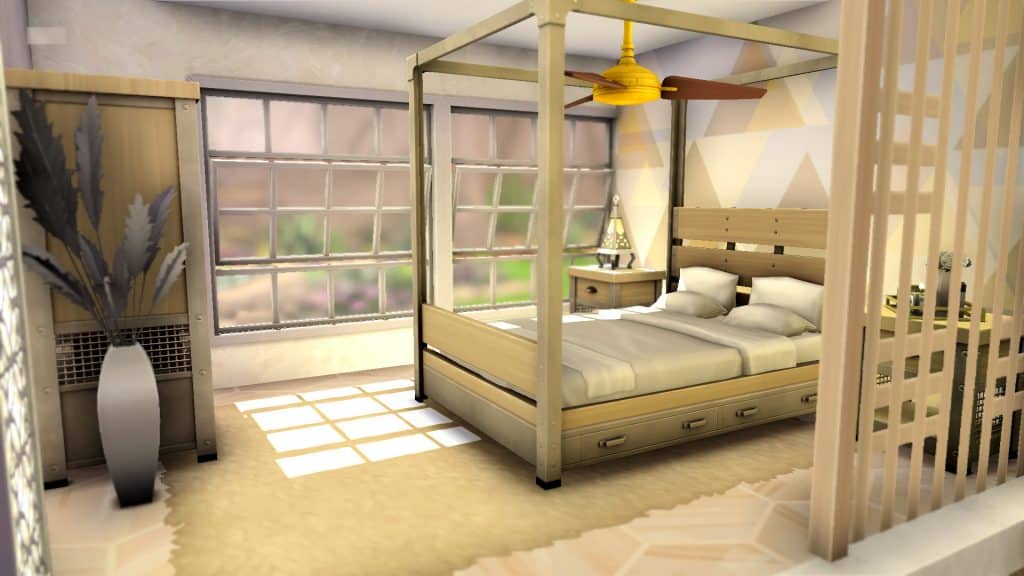 I decided to go with a large loft-style room that combined a bedroom, kitchen, living area, and patio into one compact but still roomy space. I did not design a bathroom as it was not part of that semi-combined space and the kit doesn’t really come with any items for a bathroom, anyway. I started with the bedroom, raising it up on a platform with more platform steps leading up to it. A partition wall behind the bed and a decorative fence along the side offered privacy without making the space feel too closed in. Large loft windows bathed the area in plenty of bright, natural sunlight and made the small bedroom area feel much larger than it really was. 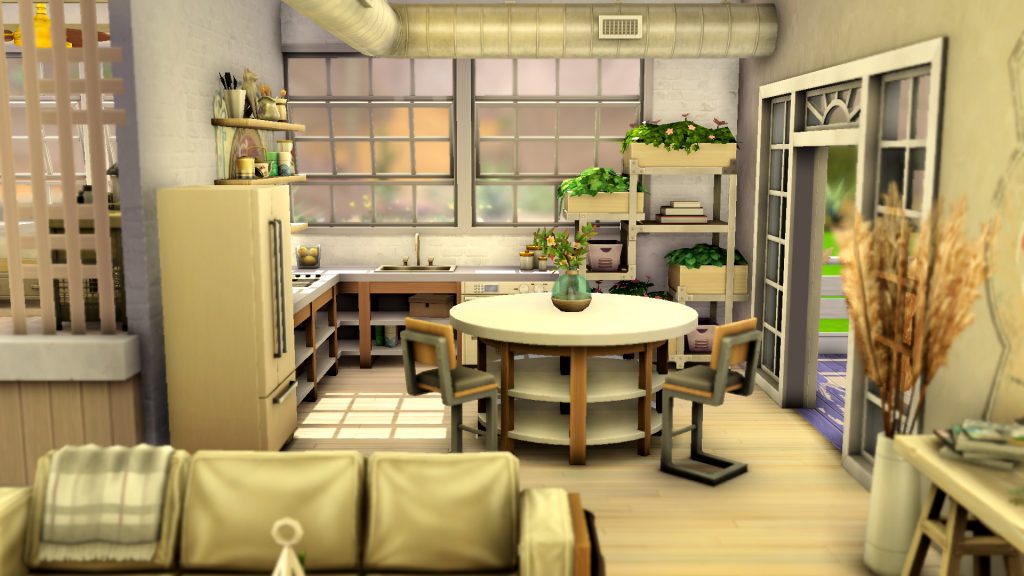 Then I moved on to the kitchen, directly to the right of the raised bedroom platform. I used the Snowy Escape counters with the open shelving to keep the space feeling open. Light and airy is what a beach should feel like and I find open shelving instead of boxy cabinets and counters help achieve that open, airy feeling you get at the beach. I also opted for open shelving above the counters along the wall instead of bulky cabinets. 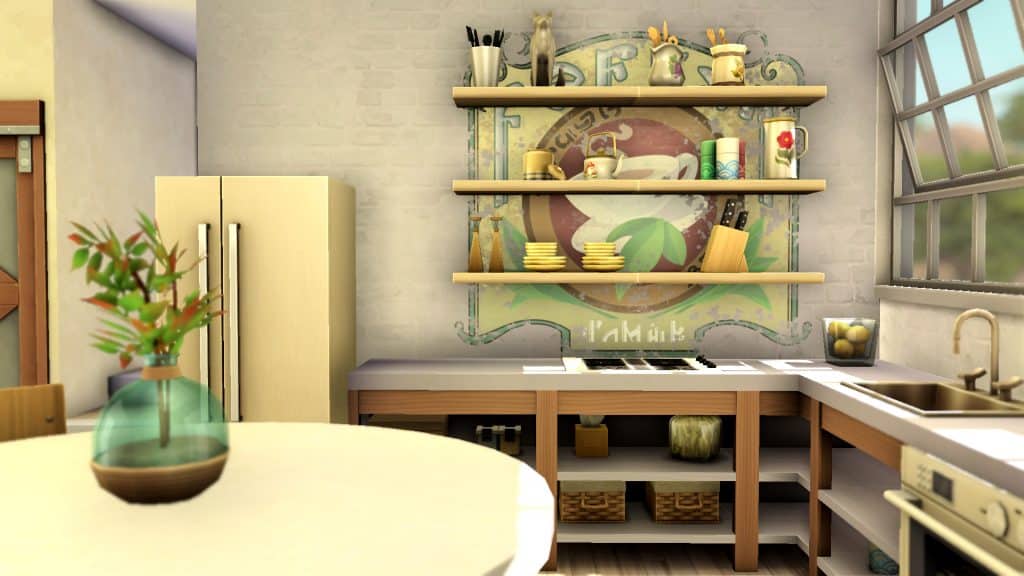 To give the space a more realistic, lived-in feel, I decorated the shelves on both the wall and the counters with various kitchen knick-knacks and clutter pieces. To bring in the Industrial Loft feel a bit more, I placed the distressed wall decal behind the shelving unit and ran the ceiling pipes overhead. I also used the open double French doors to lead to the patio and placed the planter shelving in the corner for some greenery. The industrial pendant lamps act as a statement piece above the island. 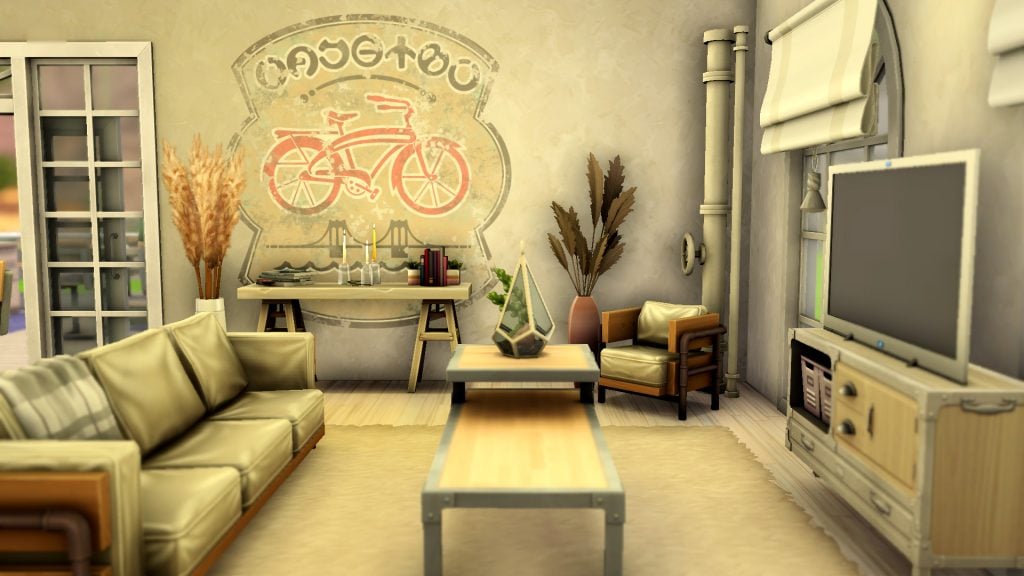 For the living space, I really tried to use as many Industrial Loft pieces as I could. The bulk of this kit suits a living room setting. I used the couch, armchair, coffee table, table plant, floor plant, floor pipe, barn doors, rug, window, pendant lamps, and distressed wall decal in this space. The challenge here was making sure the space wasn’t all beachy or all industrial; it needed to balance both styles in equal measure. To achieve this, I used lighter colours for the Industrial Loft furnishings and accented with light-coloured pieces to keep the room feeling bright and cheerful. For a touch of industrial in the light beachy setting, a light brick underneath the wall decal helped give the space that slightly rough around the edges vibe. 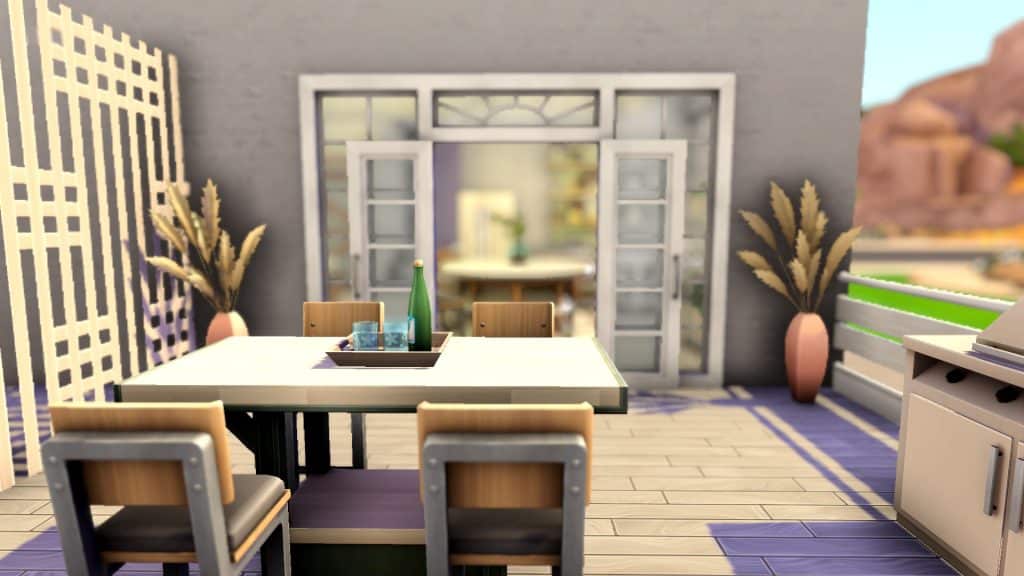 I kept the patio pretty simple. It was a small space and too many items would have made it feel cramped and cluttered. I stuck to the Industrial Loft table with matching seating and the floor plants in this space with a large BBQ and fenced it off with the same fence used in the bedroom area along one side with a more modern fence around the rest of it.

In the end, I had something that I surprisingly really loved, in spite of my lack of love for this kit. It was rustic and a bit industrial but still light, open, and inviting like the beach. I could see my Sims staying in a place like this on a Sulani vacation for sure. So can an industrial loft beach house really be done? I guess so!

If you want to download this build, it’s available as a room in the Gallery under the ID SnarkyWitch!