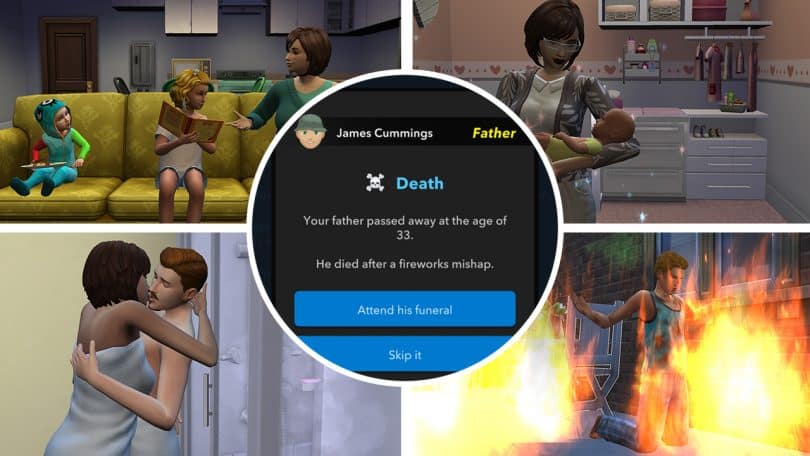 The mobile game BitLife has become popular among Simmers in recent months and it’s not hard to see why. BitLife is a text-based life simulation game you can play anytime, anywhere on your phone. It also boasts a lot of in-depth features The Sims 4 doesn’t have, mostly due to the difference in rating. The Sims 4 is rated T for Teen and as such, it cannot delve too far into violence and sexual themes. BitLife is rated 17+ and has a lot more freedom to explore these aspects of life.

The latest craze lately among Simmers is The Bitlife Challenge, where you allow BitLife to control the lives of your Sims. Whatever happens in your BitLife game must be recreated as close as possible in The Sims 4. I’ve been a fan of BitLife for a few years now and I love crossovers so I decided to do The BitLife Challenge for myself!

To keep it interesting and stop me from having too much control, I was not allowed to use BitLife’s God Mode feature. I also had to pick the Surprise Me option for every popup where I had to make a choice about what to do.

I created a new random character in BitLife and ended up starting life as a girl named Katie Cummings in Toronto, Ontario. Katie has no siblings or pets. Her parents are Lily and James Cummings (I wonder if the Harry Potter reference was intentional…) and are married. Lily is a travel agent and James is a cameraman. Now it was up to me to recreate that situation in The Sims 4!

San Myshuno is the world that most closely resembles Toronto, so I set up Lily and James in a 2 bedroom apartment in the Spice District. Lily got a job in social media and James became a freelance fashion photographer. They wasted no time conceiving baby Katie. 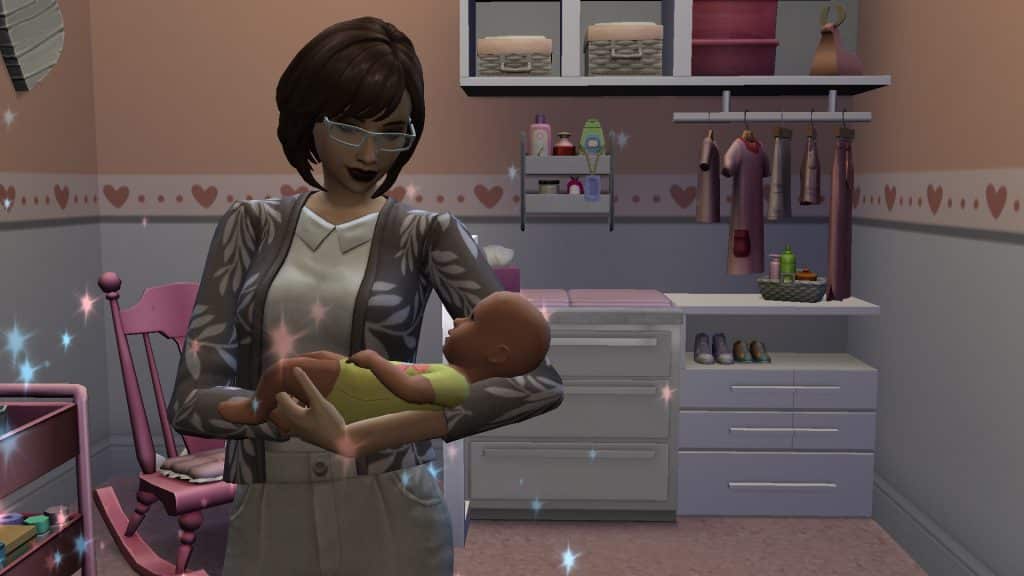 For the first few years of little Katie’s life, she seemed to have a good upbringing. Her parents worked hard to get promoted in their careers and spent a lot of time helping her build up her skills. Everything was perfect. A little too perfect. I should have known BitLife was planning absolute chaos for the near future…

James dies in a fireworks-related mishap when Katie is 5 years old. Very shocking and very sad. So, on Katie’s child-aged birthday in The Sims 4, James decides to celebrate his little girl getting older by setting off some fireworks. On the apartment balcony. As you might expect, this is a dumb idea. So dumb that it ended with James dying horribly in a balcony fire. Goodbye, James.

James’ sudden death apparently unhinged his poor widow. Immediately after James dies, BitLife informs me that Lily has given birth to a baby girl named Catherine Lebedev. Catherine is the result of a random Tinder hookup. Oof. Well, rules are rules. I create a neighbour with the same name as Catherine’s father and move him into the apartment next door. Then Lily goes over to introduce herself and ends up having a little too much fun with him.

Welcome your new half-sister, Katie! Katie has a horrible relationship with her sister and refuses to acknowledge her existence. They grow up with a completely empty relationship bar in BitLife, but if Katie thought Catherine was the worst of her problems, she was sorely mistaken. Right after Catherine’s birth, her mother is back at it again with two more of their neighbours. According to BitLife, Katie’s mom has another baby, a boy named Brad Felt, who was conceived after a steamy night with not one but two gentlemen. Yikes! 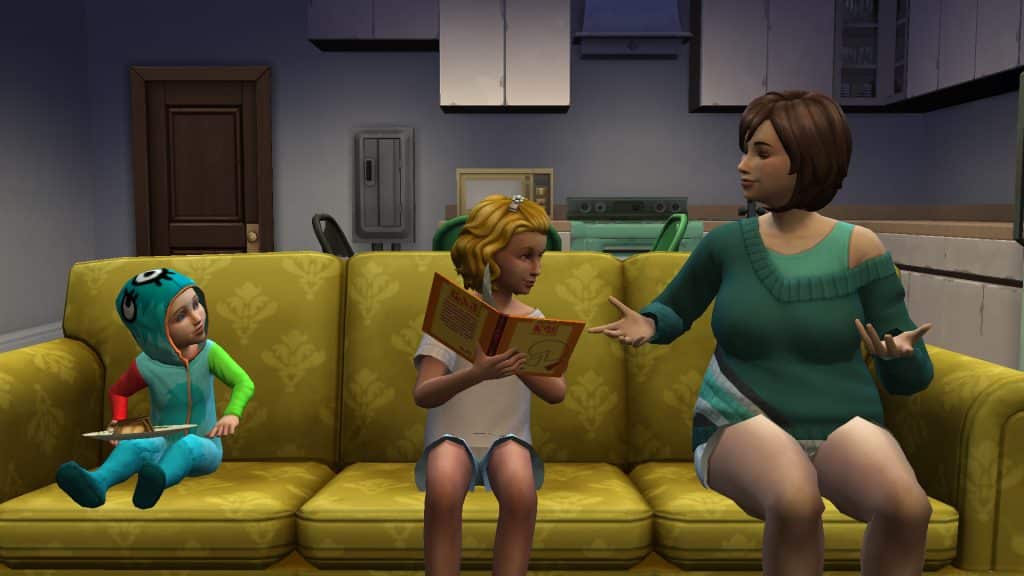 I guess being a single mom with three kids and only her Simstagram posts for income made Lily have some kind of epiphany; she couldn’t afford all these kids. Shortly before Katie’s teen birthday, Lily marries a 43-year-old university professor named Oliver Harris and changes her name to Lily Harris. BitLife doesn’t mention whether they moved in with him or not but I had a hard time picturing a wealthy professor wanting to move into Lily’s rundown 2 bedroom apartment infested with rats and roaches. Plus I’m pretty sure Lily married him because he had money and could support all her kids. So our girl Katie gets a big living upgrade and moves into a fancy penthouse in Uptown with her mom, half-siblings, and step-dad thanks to her mom’s gold digging.

I was hoping now that Katie was a teen, life would get more interesting for her. So far, most of the drama has surrounded her parents but Katie’s teen years were very uneventful. The only notable thing that happened was she joined her school’s Outdoors Club and got her driver’s license. No dating, no trouble. Just plain mediocrity. I enrolled Katie in Scouts for her high school years and coasted through as uneventfully as she did in BitLife.

When Katie turned 18 and graduated high school in BitLife, she opted to take a year off to figure out what she wanted to do with her life. The following year, she decided to turn down going to university in favour of joining the Canadian Armed Forces. Luckily, The Sims 4 does have a military career so I had Katie take a job as a new recruit. 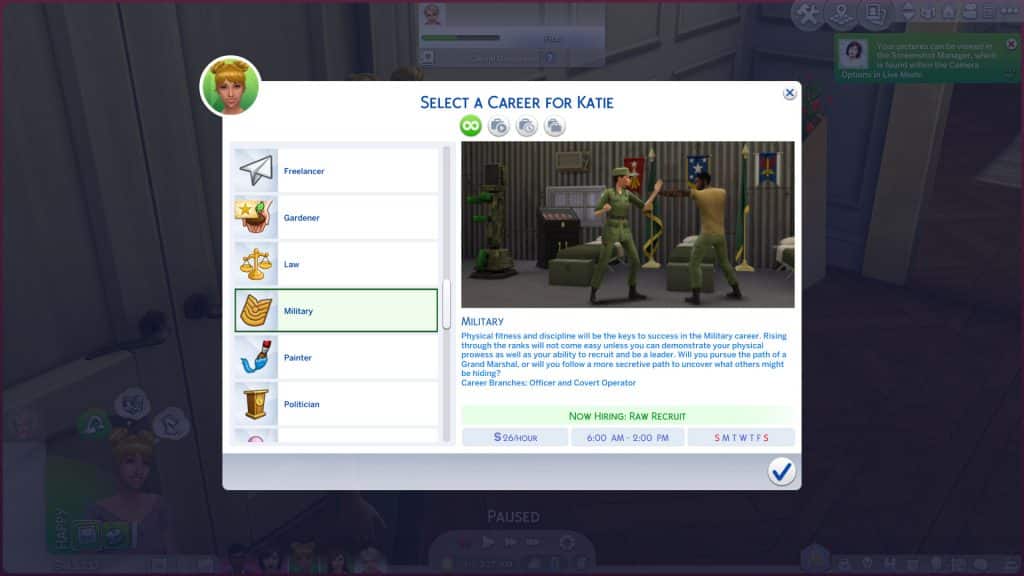 We’ll end things here for the sake of brevity but if you’d like a part two to this article detailing Katie’s adult life, don’t hesitate to let me know in the comments! Have you done The BitLife Challenge before, yourself? How did it go?