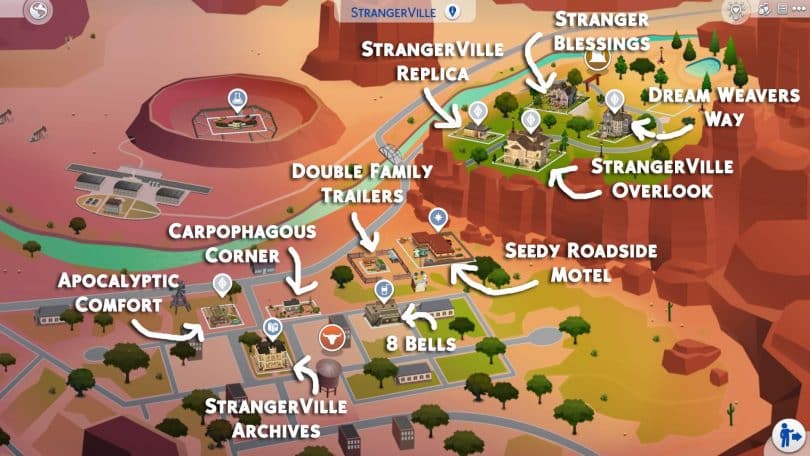 As a long-time fan of StrangerVille, it always pained me how little effort went into the lots there. Every building is painfully bare-bones and even though the exterior architecture of the Shady Acres homes are beautiful, the inside is a completely different story. Big open rooms with one or two pieces of furniture plopped down wherever really kills the enjoyment of living in StrangerVille and actually investigating the neighbours.

Obviously, I had to fix this. I went about replacing or renovating every lot in StrangerVille to suit my play style and make the place feel like people actually live there. Today, I’m sharing how I have the world of StrangerVille set up with you. Since I did not build two of the lots, I cannot in good conscience upload the save, but I can show you a map of my StrangerVille and give you all the info needed to place the lots in your own world if you want to!

There is no CC anywhere in this world but I do own every pack and kit and like to use them. If you don’t own all packs and kits, you might need to replace some things here and there. 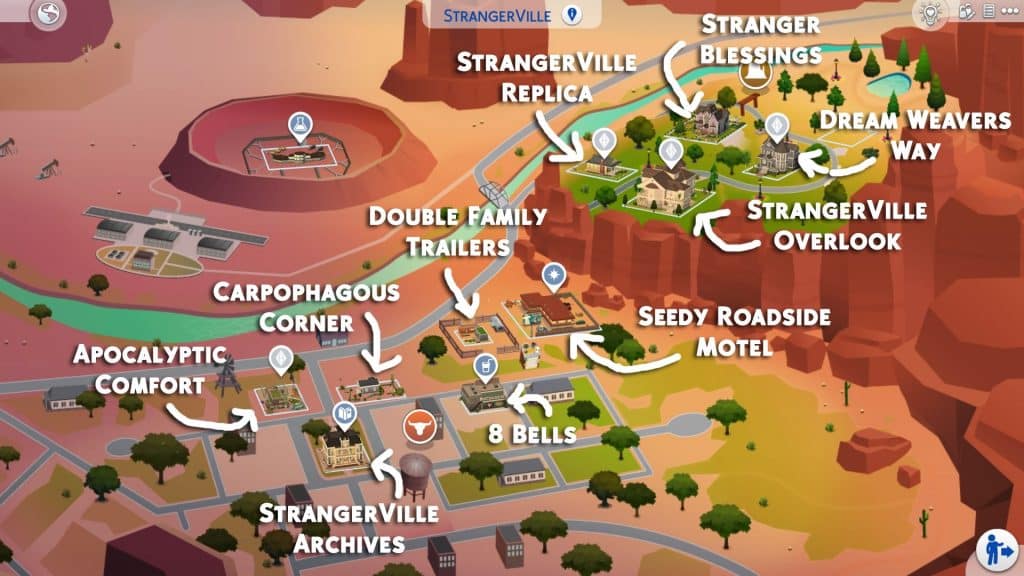 Here’s a world map of my StrangerVille so you can see where I’ve placed all my lots. I’ve done some shuffling around for the premade families and tweaked their bios a bit to fit with their moves but more info on that later on. All credits and lot info will be provided below. 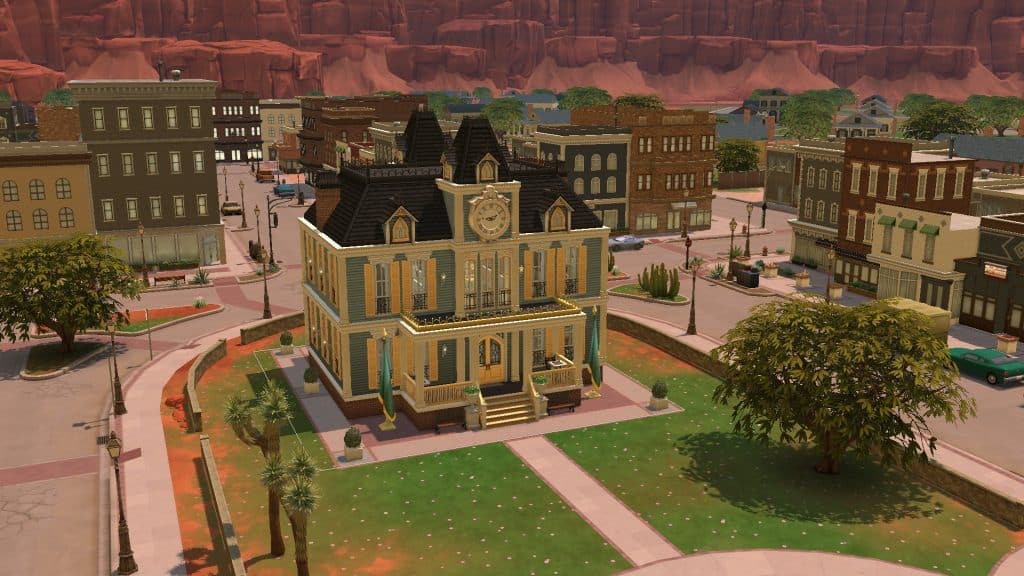 This lot replaces the default information centre in the heart of town and I absolutely love it. It looks exactly like what I would expect an old historic community building in the heart of a western American town would look. The inside is just as pretty as the outside and yes, it’s fully functional as both a library and as the scientist hangout spot for the StrangerVille Mystery plot. 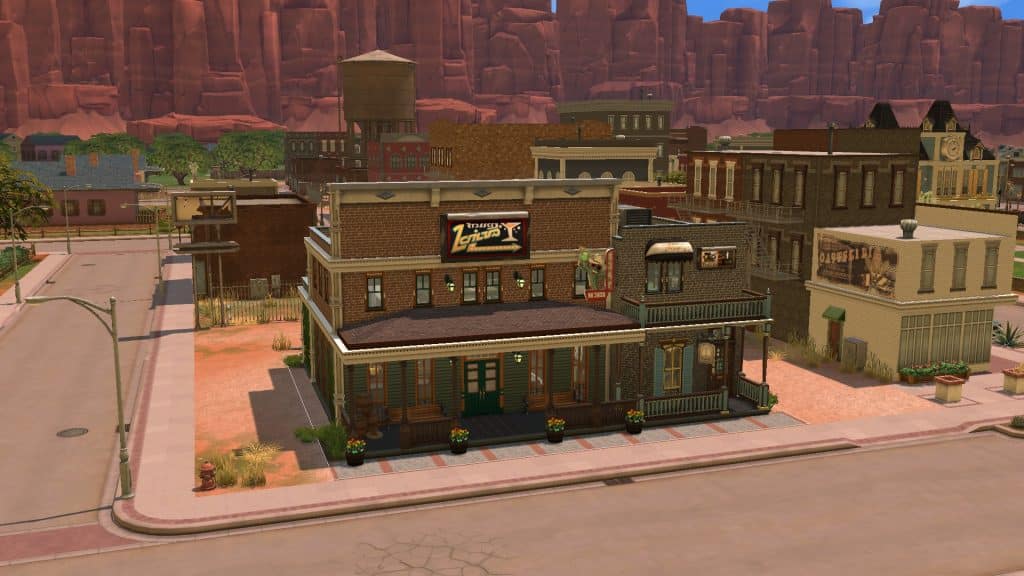 I initially downloaded this adorable lot for the bar but the military office upstairs ended up being a perfect setting for a story I was writing, too! I really fell in love with this place. The bar is a really welcoming spot to hang out, with pool tables and darts and all kinds of fun pub-like activities to enjoy and the military office upstairs adds a touch of realism. After all, the bar is where the military hangs out in StrangerVille. There is also a cute little bookstore attached as well. I just love this place so much. 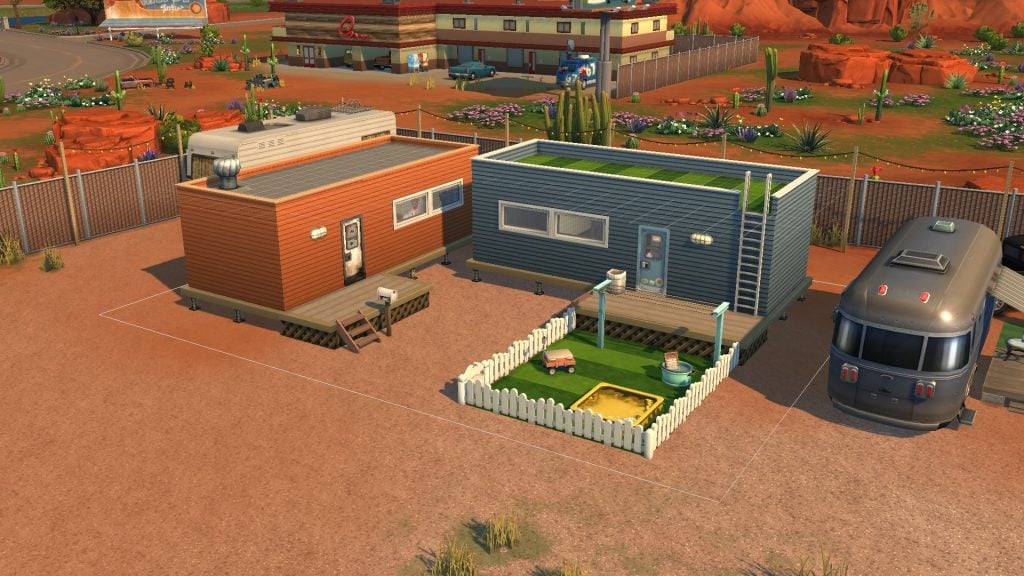 I love these trailers for the trailer park in StrangerVille. Suitable for a family (or two) to live in. I’ve taken away some things in my base save to make it under 20k so a single Sim can start out in it but the version in the Gallery is a little nicer and priced just under 30k. I just really like the idea of having two trailers on this lot to potentially have more Sims living in StrangerVille. A single Sim can also rent out the second trailer to some roommates for some extra cash, so this lot is really versatile. 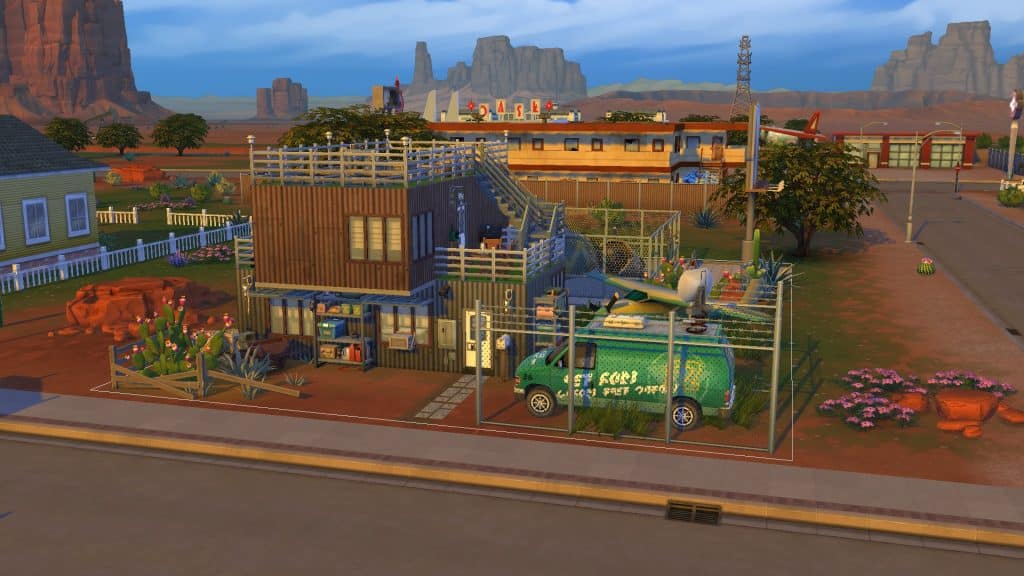 I originally built this for the trailer park so you’ll have some empty space at the back to fill if you place it where I have. This is a tier 3 tiny home made out of two stacked shipping containers.

I needed the plane crash site for my motel, so I have George Cahill living here. His story goes that city council wanted to rebuild the abandoned motel (seen in the background of this shot) to revive the dying tourist industry in StrangerVille but needed George’s land. The only way he’d agree to go is if he was given a new plot of land with the rights to build whatever he wanted on it and a piece of Old Penelope had to be preserved and given to him. George was given some land in the suburbs where he built the apocalypse container home of his dreams, the city built their motel, and the nose and engine of Old Penelope are now popular tourist attractions in George’s backyard! 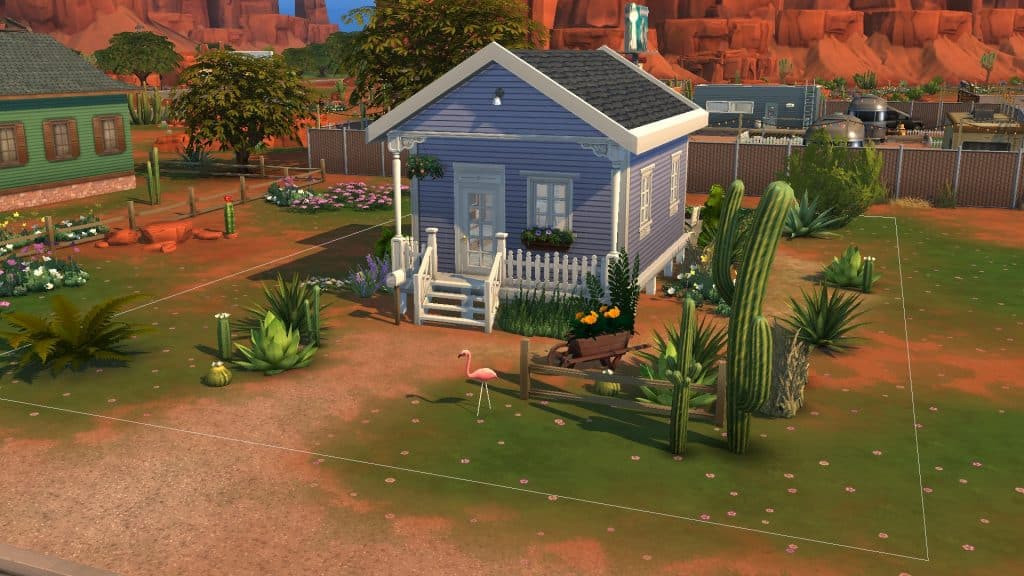 This was a remodel of the original starter lot in this spot. I turned it into a tier 2 tiny home and it is still a starter. It’s perfect for either a single Sim or a couple. This home is one of the more “normal” ones in StrangerVille so it’s great for a Sim who’s just moved to this town, oblivious to the strange nature of the place. 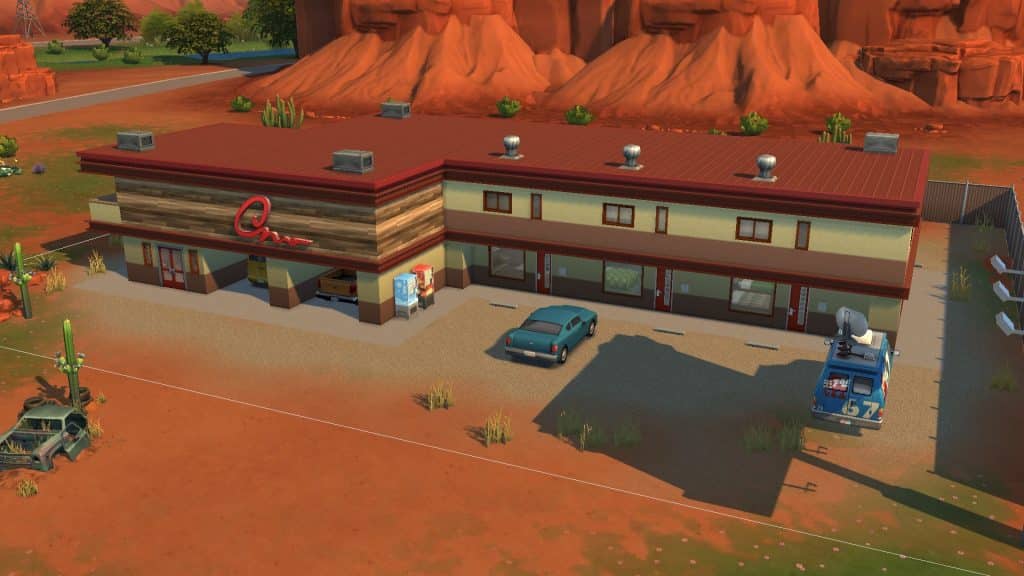 This is a replica of the abandoned motel shell as set dressing in StrangerVille. Perfect to use as a rental and a great place to tell the story of a passing traveler who finds themselves involved with the craziness of StrangerVille. The rooms are in varying stages of grunginess so you can choose between a pretty normal room or some truly horrifying ones. There may or may not be a crime scene in one of the rooms. Just saying…

Alternatively, if you’d rather have a cute little western ranch here than a sketchy motel, I also have a lot called The Ol’ Homestead you can place here. It’s a 100 Baby Challenge home but shouldn’t be too hard to rearrange the layout a little to suit a “normal” family. 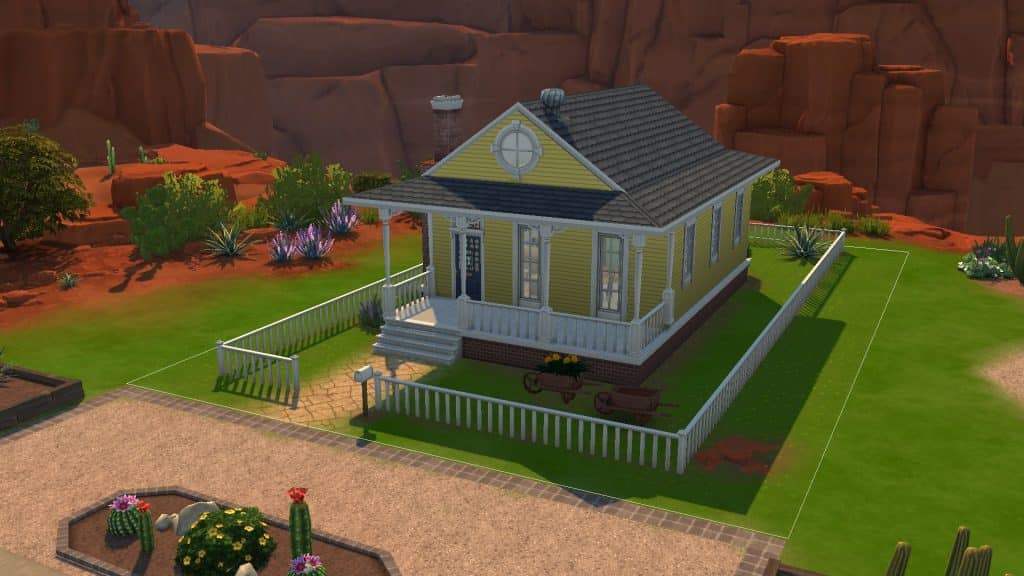 This is a replica of the cute little yellow house shell as set dressing in StrangerVille. I designed it for the Sigworths and moved them up to Shady Acres since I needed their original lot to move George into.

Their story goes that Jess rose in the ranks of the military quickly after moving to StrangerVille and after a few promotions, they were able to move to the nicer neighbourhood of Shady Acres. Dylan was hoping the move to a better area would be a fresh start but the odd behaviour Jess started exhibiting when they moved to StrangerVille has followed them up the canyon… 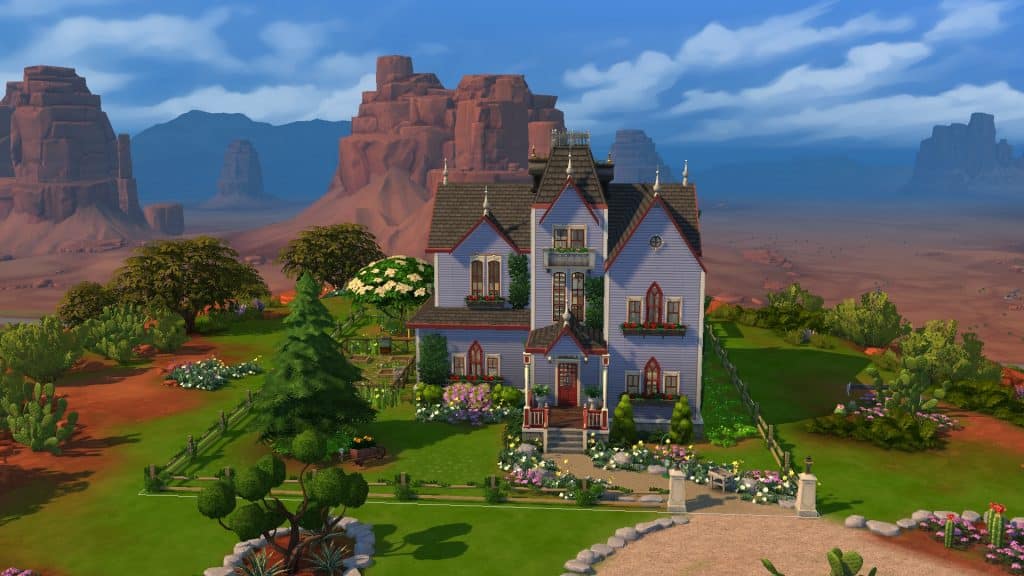 This is one of my first builds from when I was really starting to come into my own as a builder. It’s a 100 Baby Challenge house but it shouldn’t be too hard to rearrange the upstairs layout a little to suit a “normal” family if you so desire. 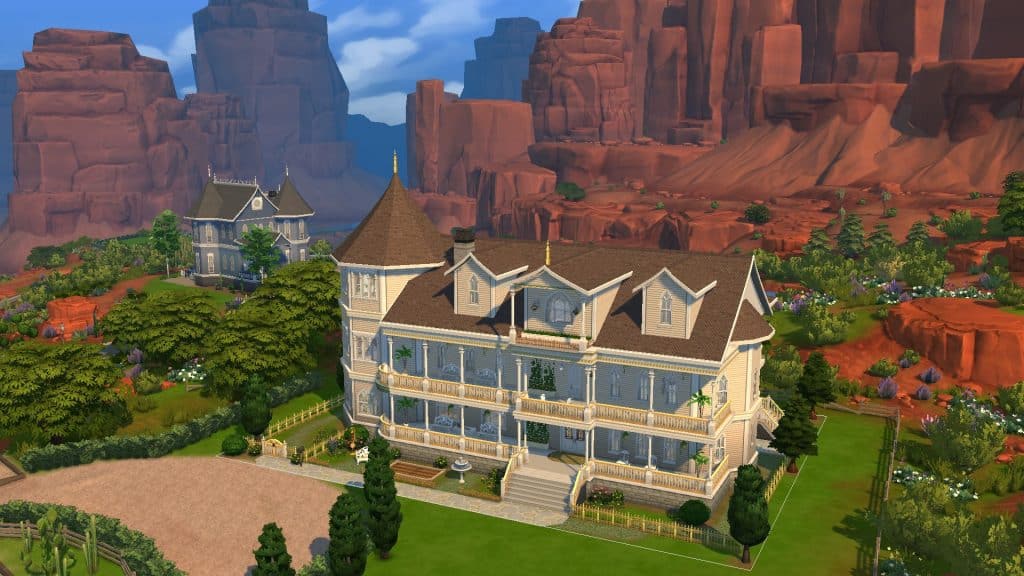 This is a remodeled version of the Roswells’ original home. It got a paint job and the interior’s completely redecorated from top to bottom. I even turned those useless inaccessible attic spaces into usable rooms. I didn’t see any reason to do major exterior construction because the structure itself is beautiful. It just needed a fresh coat of paint, some detailing, and a LOT of work on the inside so that’s what I did. I hope Ted and Meredith like the major interior design upgrade. 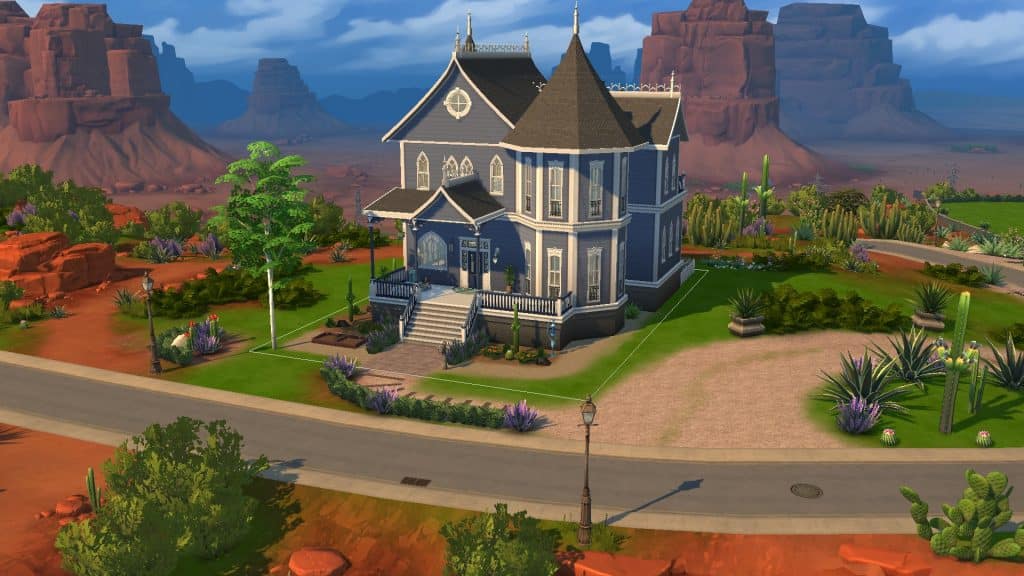 This is my remodel of the Eclectic Arts roomies’ original home. It got a paint job, some new windows and trim, and the interior’s been redecorated to suit a group of young artsy hipsters with too much money. Like the Roswell home, I didn’t see any need for major construction on the outside; it was already lovely. I did do some interior construction to add a third bedroom so all the roomies actually have somewhere to sleep and I opened up the living area/foyer a bit by knocking out a wall.

And that’s my StrangerVille! I left one lot blank in Shady Acres in case I feel like building something from the ground up or starting some kind of rags to riches playthrough but all other lots have been rebuilt, replaced, or remodeled. I loved playing in StrangerVille before but it’s a lot more fun living there now that the town doesn’t look abandoned and empty.

Feel free to download all these lots and place them where I have, or take this as inspiration to do your own thing with StrangerVille; it’s entirely up to you!