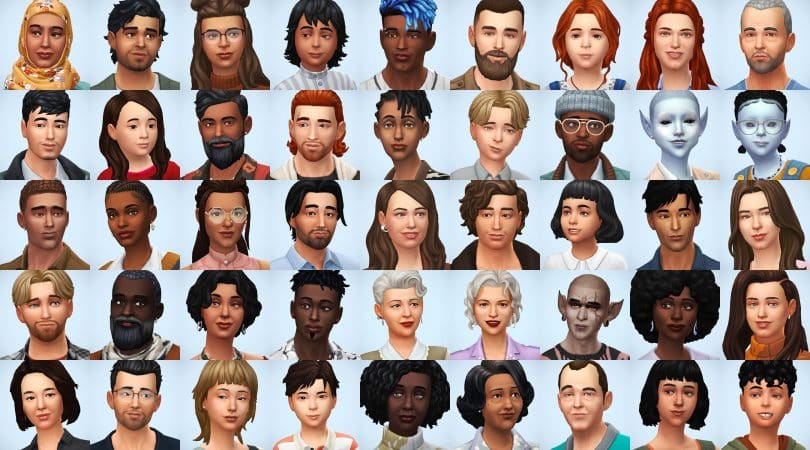 Have you ever wanted to fill your Sims 4 worlds with diverse, unique Sims but didn’t have the energy to make a bunch of Sims yourself? While The Sims Team has definitely stepped up their game with the premade Sims in recent expansions, I think we can all agree that Simmers add the most diversity and creativity to the game.

simsontherope has just uploaded a total of 14 households (48 Sims) to the Gallery that add more diversity and depth to your game! All of these Sims already come with careers, likes and dislikes, skills, some extra reward traits, and even lifestyles! The Sims are very diverse, with Sims from many different backgrounds and cultures. Many of the households have unique family structures and do not follow the traditional nuclear family archetype. There are even some occult Sims in the mix for players who enjoy fantasy-style gameplay! Some households have pets as well for the animal lovers out there. Every Sim comes with three different everyday outfits so they won’t always be wearing the same thing.

If diverse Sims who are already all set up to play sounds great to you, then read on for a quick summary of each household below! simsontherope does not give backstories for any of the households, leaving that up to you but they have put a lot of care and thought into each Sim’s personality which shows through in their traits, interests, skills, careers, and lifestyles. This gives you lots of inspiration to make up your own stories for them. 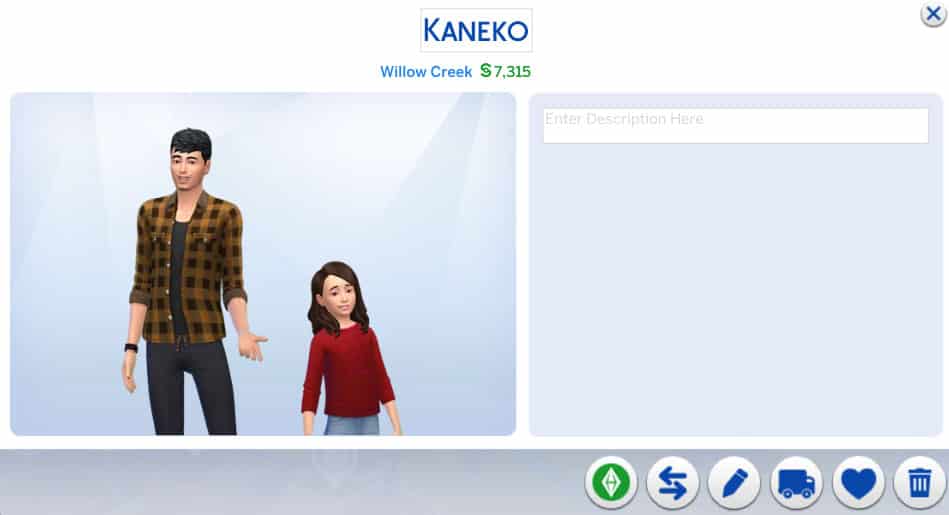 Single dad and salaryperson Daiki is raising his daughter Mai on his own. That can’t be easy given his demanding job and long work hours! No wonder he’s a coffee fanatic! He needs the caffeine to keep up with work and parenting! His daughter Mai is a Goofball and Great Storyteller with high Responsibility and Empathy character values so I guess Daiki’s been doing a pretty good job raising her. 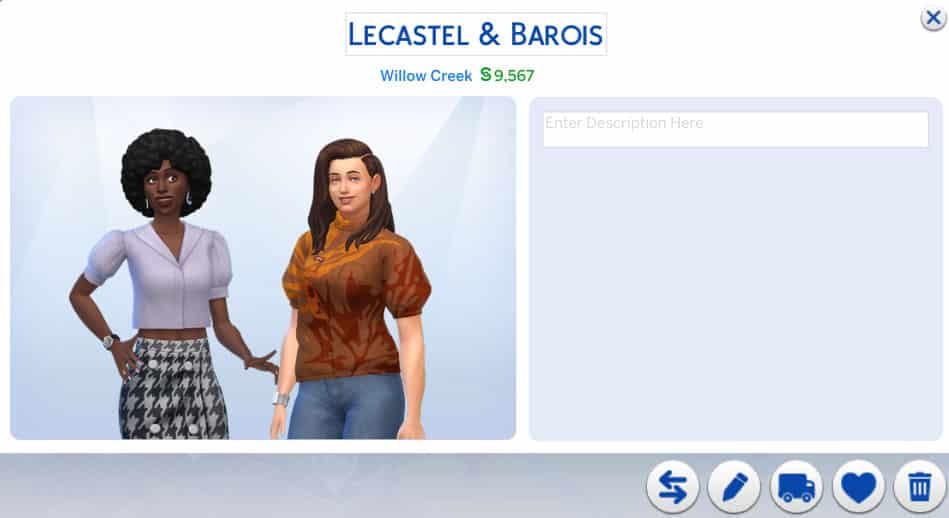 Camille and Hélène are roommates who start out as acquaintances with each other. While Camille is a very proper, highly educated woman of culture, Hélène seems a bit… shady. She’s working as a secret agent and has the klepto trait as well as a bad reputation. There’s definitely potential for drama in this household. 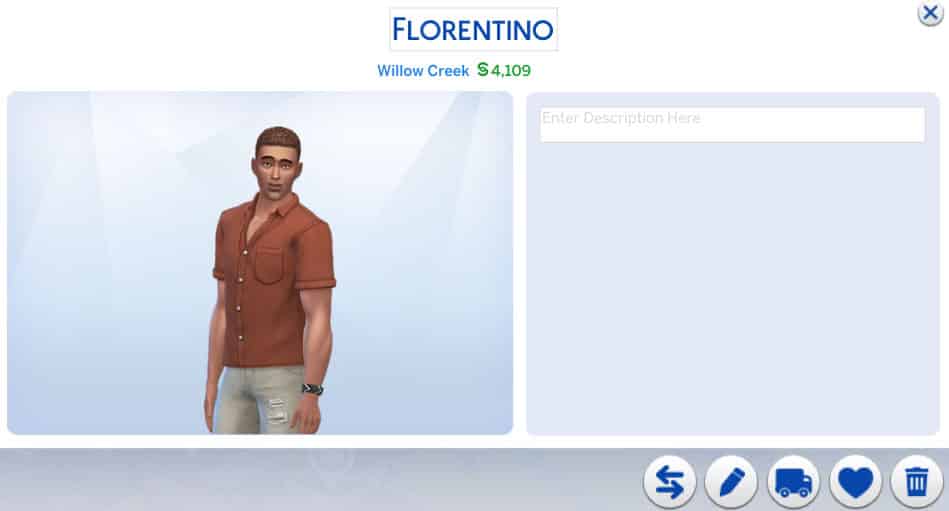 Oscar might look like an ordinary dude who’s just trying to do his part to save the planet but don’t be fooled; Oscar is a merman! Since he spends a lot of time in the water, it only makes sense that he’d feel very passionate about keeping the oceans healthy and clean. He’s a Conservationist and a pretty argumentative one at that. He’s not afraid of confrontation to spread his environmental values. 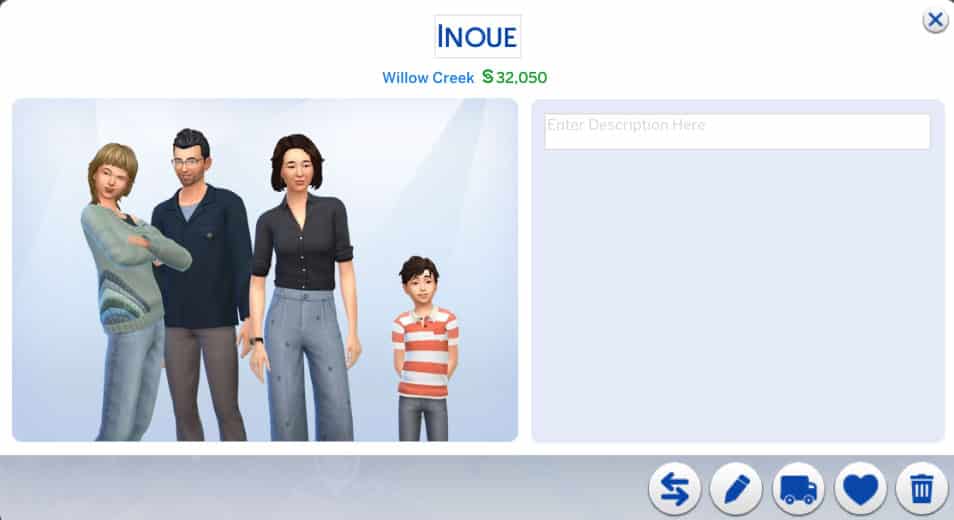 Married couple Tetsuya and Megumi are quite high up in their careers and are raising their two children, Nanami and Tsubasa together. While the entire family have good relationships with each other, there is some potential to stir up a bit of controversy if you’re into that. Tetsuya is a workaholic but also very involved with his family so maybe he’s being pulled in two different directions. Megumi is also very career-minded. Their teenage daughter is jealous and wants to be a serial romantic while her little brother is adventurous and a night owl. Maybe Tetsuya and Megumi are starting to lose control of their kids while distracted with work. It probably doesn’t help matters that Tetsuya is self-absorbed and Megumi is Insensitive. 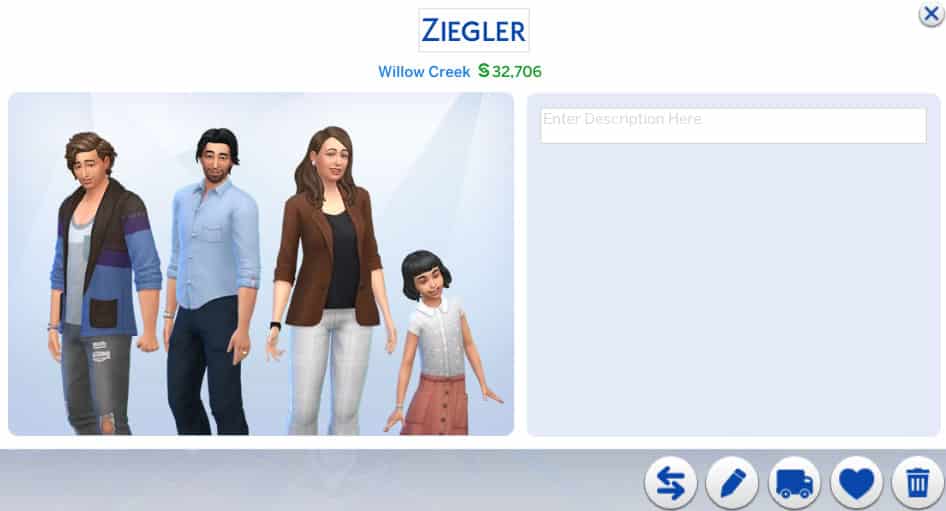 Olivia and Lanzo have an… odd relationship. They have two children together, Basil and Darna, yet they are only acquaintances with each other. Lanzo is irresponsible and a slacker with the Hungry for Love lifestyle while Olivia is an art loving perfectionist with an Art History degree. Perhaps these two are exes trying to co-parent their children peacefully together? They don’t have the Broken Up or Divorced relationship bit but hey, it’s up to you to interpret this family’s story. 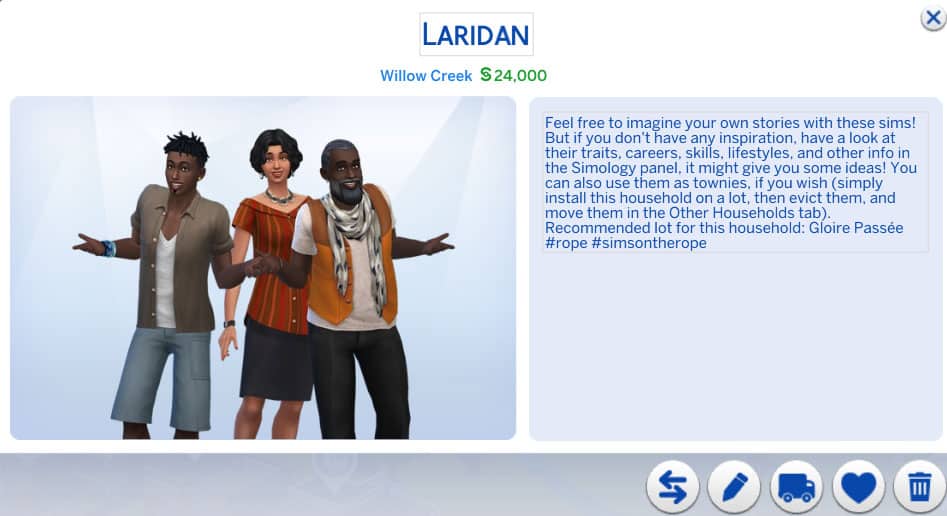 Valentina and Marc are a happily married couple raising their son Olivier together. This family seems mostly stable with not much drama going on but of course, you can change that. Valentina has somewhat of a “Mean Girl” vibe to her; she’s very social and charismatic, seeking popularity but she’s also mean. Her husband seems very fun-loving and laid back, which is perhaps how he still manages to have a good relationship with Valentina. Olivier is a storm chasing gym rat and a slob which could prove to be a nuisance to his parents. 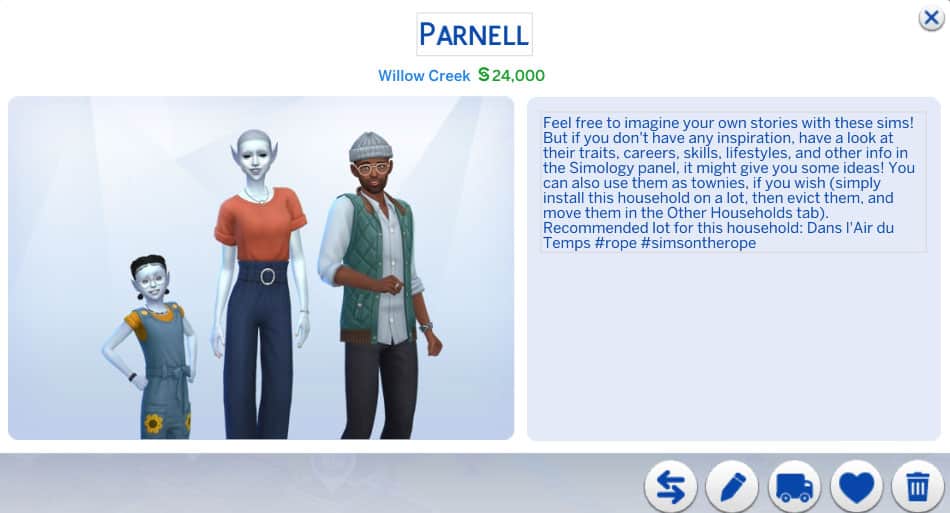 As you might be able to tell from their picture, Tonya and Moriah are aliens! Tonya is happily married to her human husband, Sammy, and they are raising their daughter, Moriah, together. Tonya is a scientist with the paranoid trait and Sammy is in the Tech Guru career with a Computer Science degree. Why is Tonya so paranoid, I wonder? Did she shirk her responsibilities on Sixam to run away and raise a family on earth with her human lover? Are there angry aliens from Sixam looking for her? Is she in hiding? She is Indoorsy… All that is just my oen speculation, of course, but maybe it will provide some inspiration if you choose to play with them. 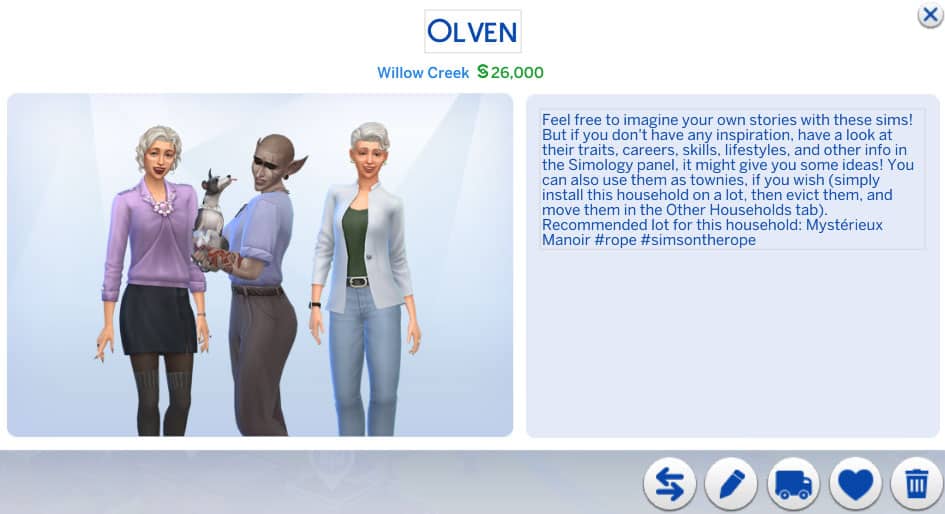 The Olven household is quite the interesting one! Marie and Margaret are sisters and Cassim is Marie’s son, making him Margaret’s nephew. What’s so interesting about that, you might ask? Well, Marie and Cassim are spellcasters but Margaret is a vampire! Margaret works in the education career and has Perfect Sun Resistance, among other vampire abilities. I initially thought she might be trying to live an ordinary human life until I saw that she has an awful reputation. Maybe she likes to snack on her students’ plasma? Who knows! It’s up to you! Her sister Marie, meanwhile, has a great reputation but her son Cassim seems to take after his Aunt Margaret a bit more even though he’s a spellcaster. They also have an adorably derpy dog named Goblin. Lots of interesting ways to play this household! 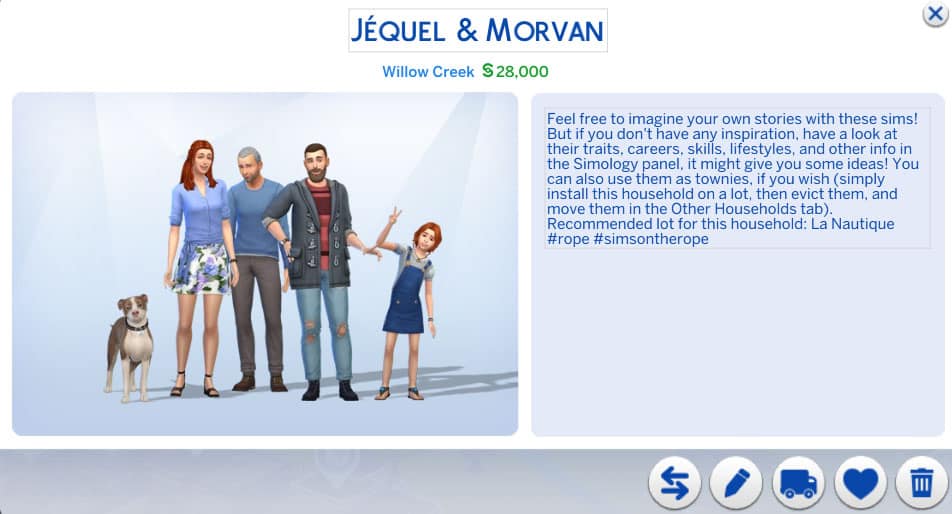 Guénaël is Solen’s father. Solen is married to Andrev. Solen and Andrev have a daughter named Iana. This family seems quite happy and unproblematic on the surface but dig a little deeper and potential for drama is bubbling with this family. Andrev is an animal loving, outdoorsy, adrenaline junkie who makes his living as a career criminal. His wife, Solen, has the Non-Committal trait but also has the Companion trait, making her loyal to her husband but also kind of flighty in general. Andrev’s father-in-law, Guénaël, is a proper sort of fellow who is a detective! Will Guénaël find out about his son-in-law’s illegal activities? When he does, will Solen stay with her husband or bail out of the marriage? And who will get custody of Iana and the family dog, Iael? I guess that’s for you to decide. 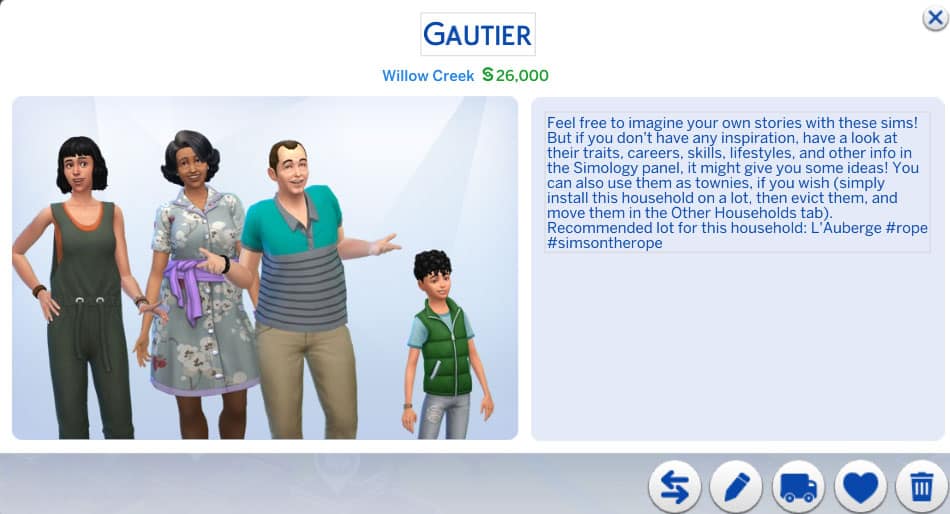 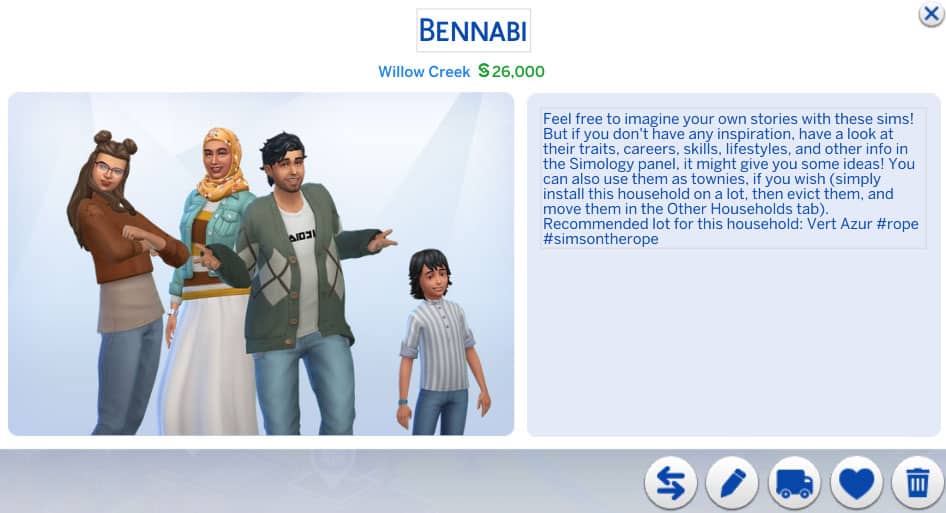 Karima and Tahir are a married couple raising their two kids, Jayla and Anouar, together. Both Karima and Tahir have family aspirations but they both also have demanding jobs. Karima is a salaryperson and Tahir is a food critic. Their daughter, Jayla, seems to be a bit of a rebel and wild child. She has the Dastardly trait and a Mischief aspiration. Perhaps Karima and Tahir might struggle to keep control of their rebellious daughter while juggling their careers and with all the attention on Jayla, will poor little Anouar get forgotten about? 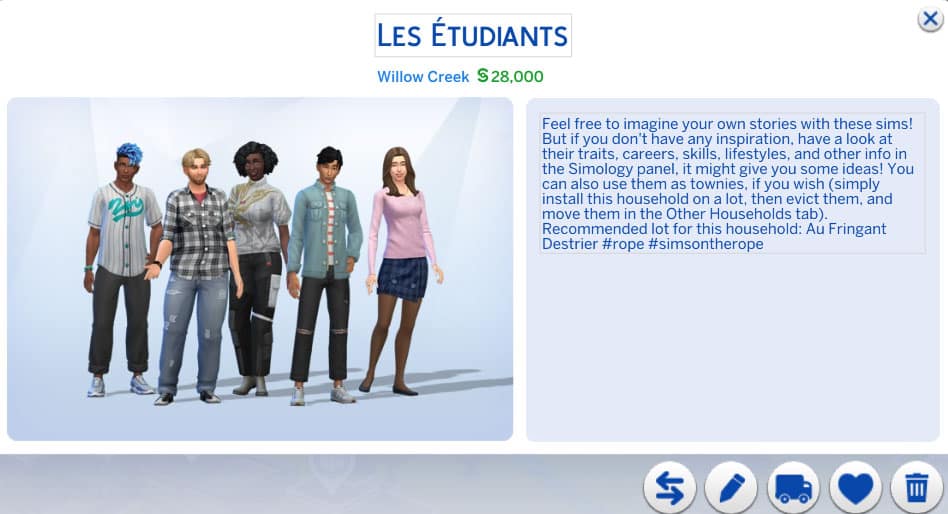 This household is comprised of five university students who are all acquaintances with each other. Some of them attend the University of Britechester while others attend the Foxbury Institute. They’re all in different programs, both standard and distinguished, and have a very diverse set of personalities. Of course, any college roommate situation is bound to have potential for messy drama so hop right in and see how you can mess their lives up… or you know, make them all happy and successful, I guess. 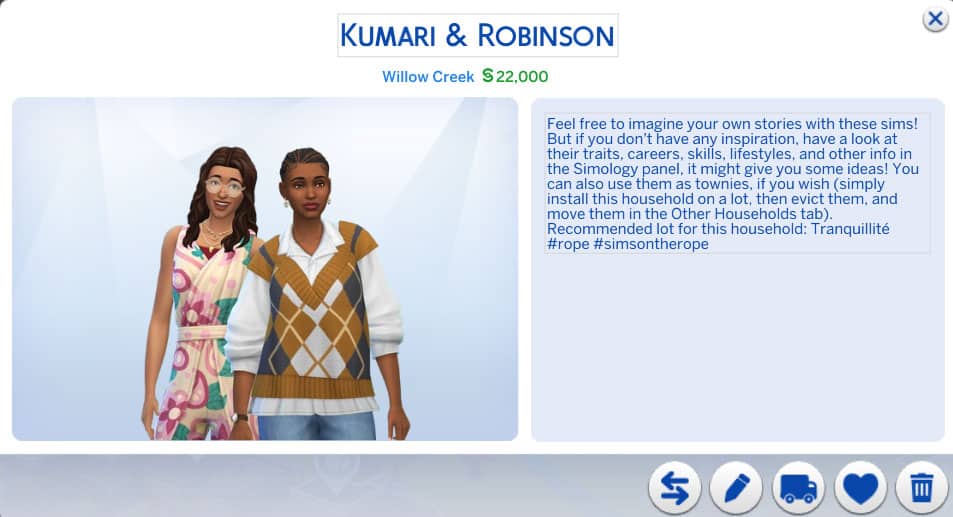 Brie and Nadiya are a married couple who seem to live a somewhat offbeat or hippy lifestyle. Nadiya has a wellness aspiration which comes with a spa membership. Brie is high maintenance and works in the entertainment industry. They have a good relationship; however, in spite of her wellness aspiration, Nadiya is argumentative and hot-headed. Maybe rightfully so, working in customer support. Those traits seem to clash with Brie’s personality, who has all good traits apart from her high maintenance lifestyle. Is… Brie only using her wife for her spa membership? Hmmm. 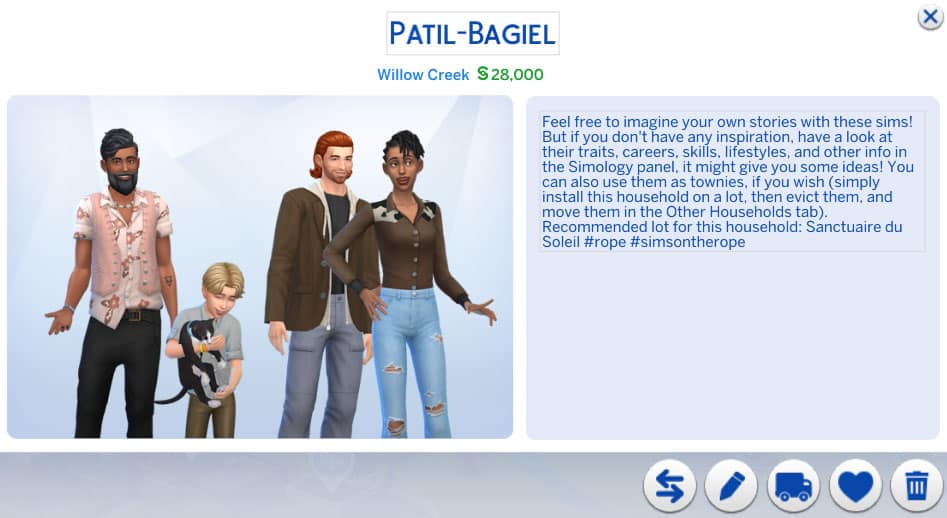 Éric and Narayan are a married couple with a young son together named Otis. Éric also has a teenage daughter from a previous relationship named Carine. Éric is a travel junkie with the Jungle Explorer aspiration and the Frequent Traveler lifestyle while his husband Narayan is a domestic Sim with a family aspiration. This adds some potential for conflict between them. Carine also has the Hates Children trait which will no doubt make it difficult for her to get along with her younger brother. The family also has an adorable cat named Vaillant.

If you loved these unique households as much as we do, you can download them all from simsontherope’s Gallery! They are all CC-free but do use a variety of DLC packs.

You can also download individual .tray files for each seperate Household from simsontherope‘s blog, which we’ve linked down below!

I just gave a brief summary and some story inspo ideas for each household but there’s much more to each Sim that I did not cover in this article. Download them for yourself and see just how interesting all of these households are!