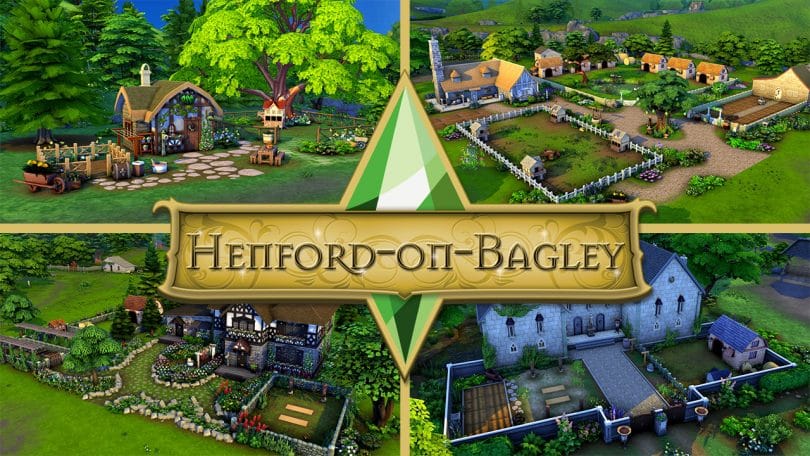 I’m a huge (and I mean HUGE) fan of The Sims Medieval. I might actually be borderline obsessed with this game but that doesn’t mean The Sims Medieval is perfect. The game is primarily a fantasy RPG and has a heavy focus on quests rather than a true life simulation like the main Sims series. It has a lot of limitations that The Sims games don’t have, even in sandbox mode. I’ve always longed for a medieval life simulation exactly like The Sims in every way, just in medieval times.

The problem is, The Sims 4 never really had any worlds that made sense in a medieval setting. You could build all the medieval buildings you wanted but the non-editable sidewalks, roads, cars, and big skyscrapers in the background really killed the vibe. Until Cottage Living came along, that is! While Henford-on-Bagley does have touches of the modern world here and there, it’s largely a step backwards in time, making it an ideal setting for a medieval world. My dreams could finally come to life! 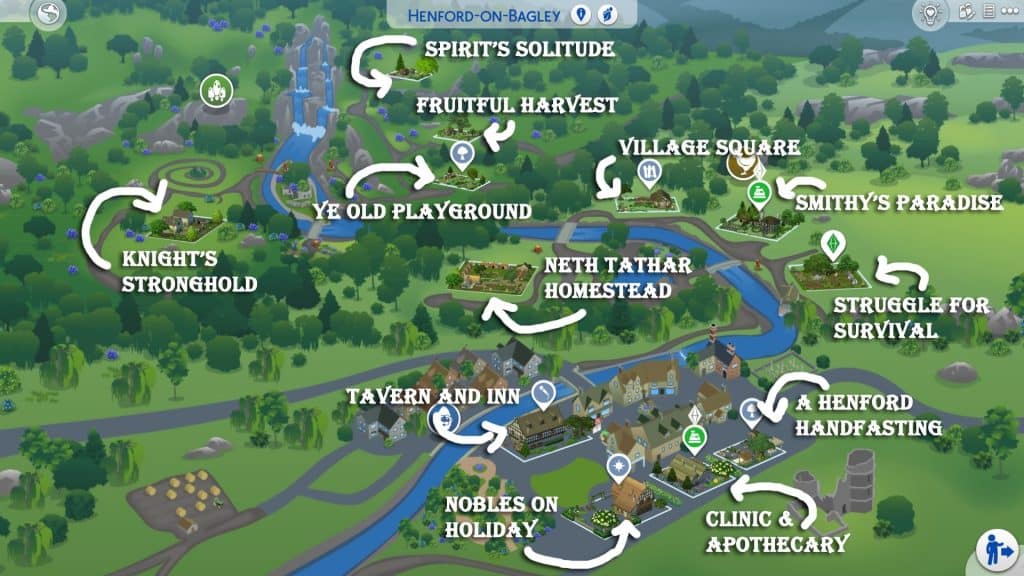 Refer to this map for lot placement!

I spent weeks rebuilding Henford-on-Bagley from the ground up with CC-free medieval builds! All the builds are functional off-the-grid and are actually livable, usable spaces for your Sims so you can play normally in them. Before you check these builds out yourself and go “Hey Snarky, this isn’t actually 100% authentic to medieval history,” you’re absolutely right. I’m not a historical expert by any means and I also had to work within the game’s limitations but I love this (mostly) medieval world I’ve created, anyway. It does its job bringing my imagination back in time while I’m playing.

I had a few rules for myself when designing my medieval Henford-on-Bagley to make sure I was keeping things as low-tech as possible while still creating fun and functional spaces for my Sims:

With all that in mind, let’s get on with the medieval tour, shall we? 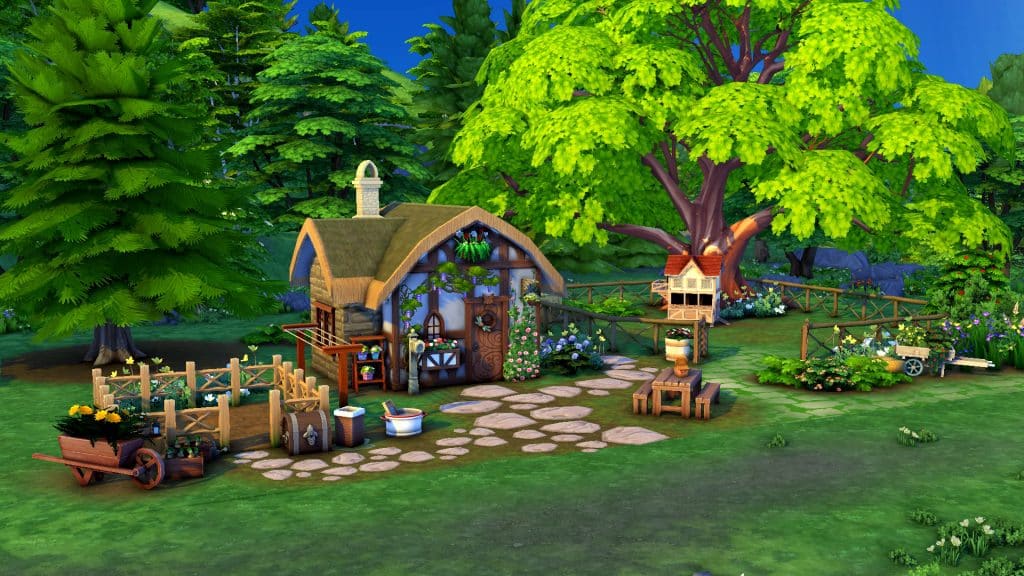 This 29-tile microhome is also a starter home and perfect for a single Sim in tune with their spirituality. It comes with a little garden, a séance table, a washtub with clothesline, and a coop for some chickens so your Sim can be self-sufficient off-the-grid. 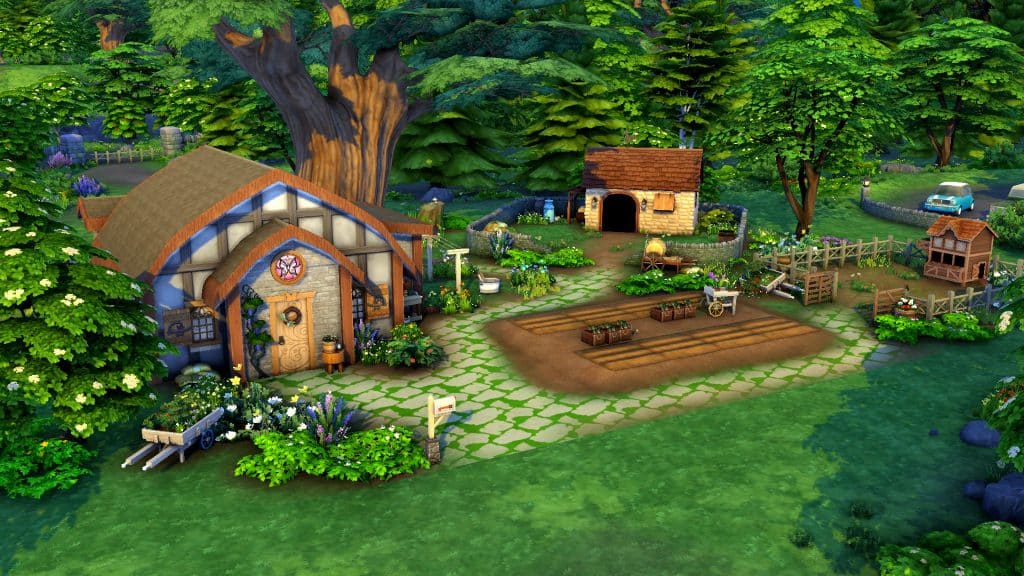 This starter cottage is suitable for a young pair of newlyweds expecting a baby soon! It may be a small plot of land but it has everything a budding farmer needs to build a successful life for themselves. The house may need expanding as the little one grows, though. 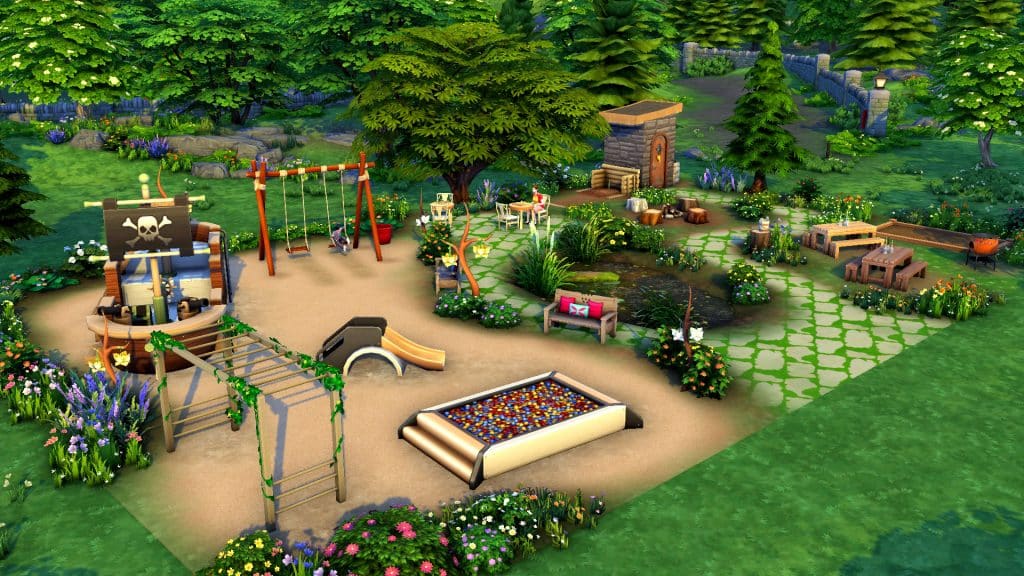 This (mostly) medieval park is a great spot to enjoy an afternoon with the entire family. It has outdoorsy activities for all ages, including toddlers, so everyone can take a break from toiling in the fields once in a while and have some fun. 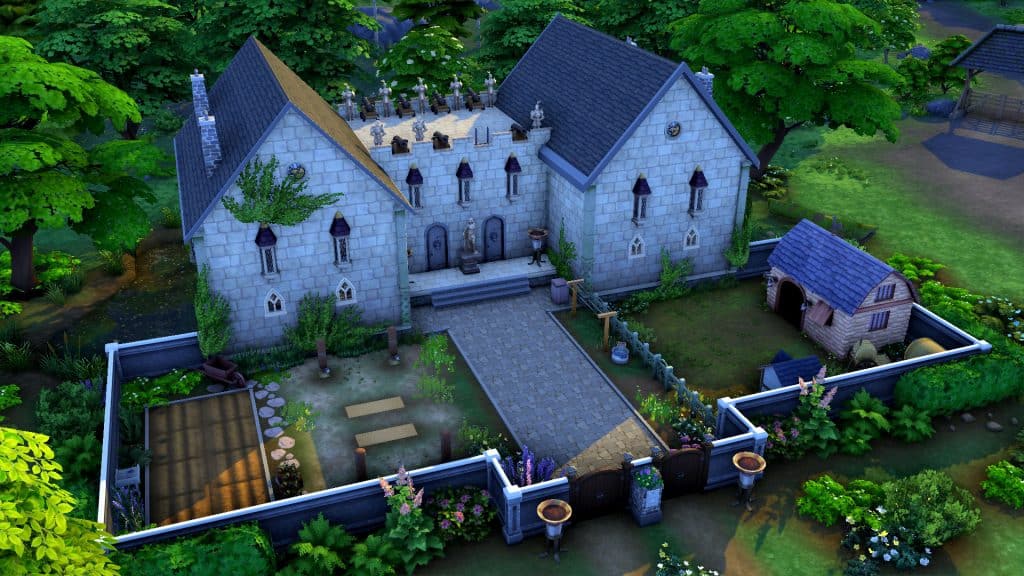 This small, fortified manor fit for a knight puts safety first. With thick stone walls, narrow windows, guards and cannons on the roof, training yard, animals, and crops secure inside strong courtyard walls, and a moat running along the back of the building with a hungry alligator in it, only the bravest souls would dare try and infiltrate this stronghold. 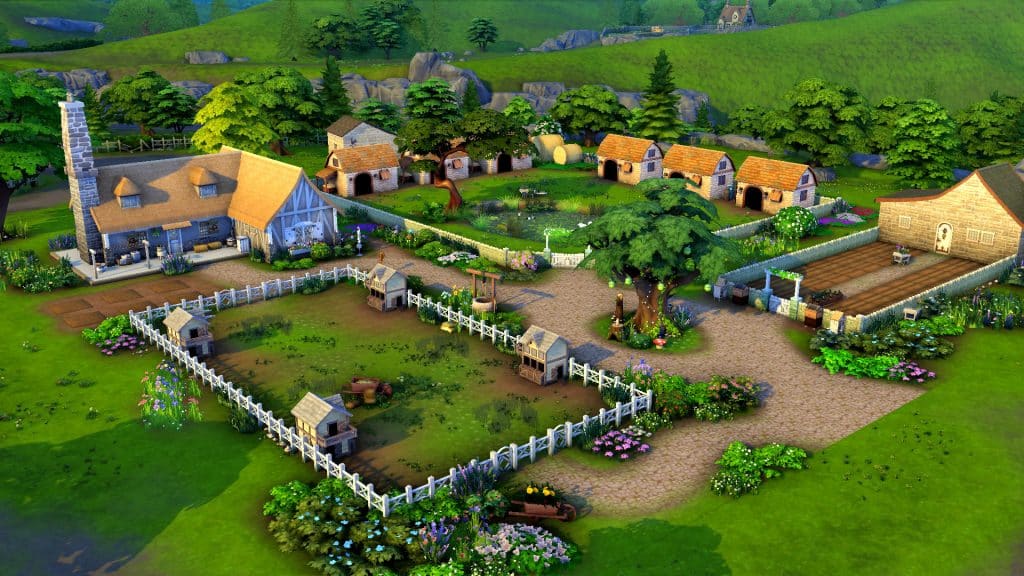 This mid-priced family farm is the largest plot of land in Henford-on-Bagley and isn’t for anyone who’s afraid of hard work. With six animal sheds, four chicken coops, 50 garden plots, birds, bees, insects, and bunnies to tend to, anyone living here will have their hands full. Good thing there’s three bedrooms that can accommodate up to five Sims. 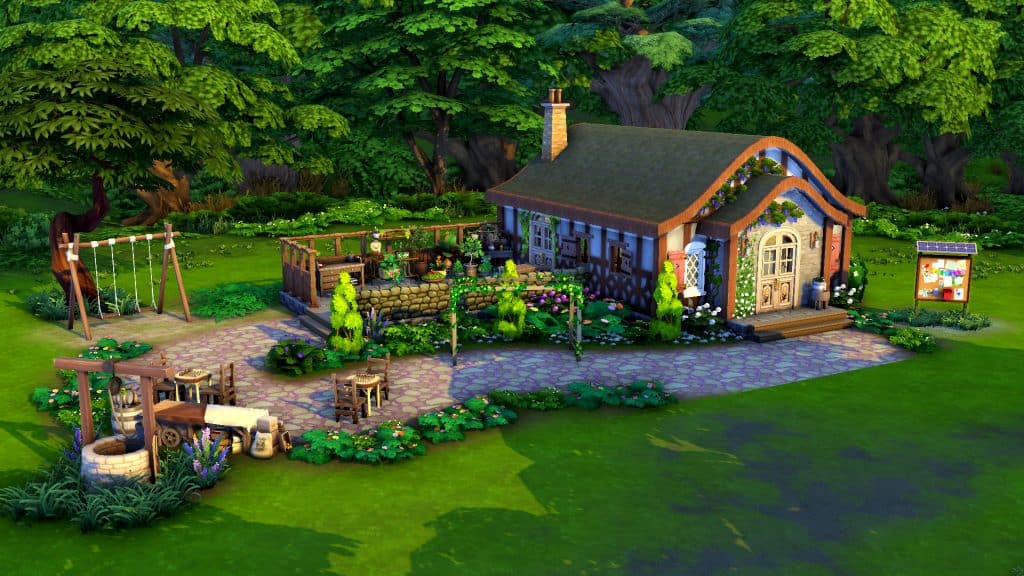 This medieval community space offers plenty for local residents to do. The default space has some generic fun activities for Sims to enjoy, but if you need something more specific, you can vote to turn this lot into a marketplace, a community garden, or a maker space. Community spaces have special instructions for being placed properly so make sure you read the Gallery description for this lot carefully. 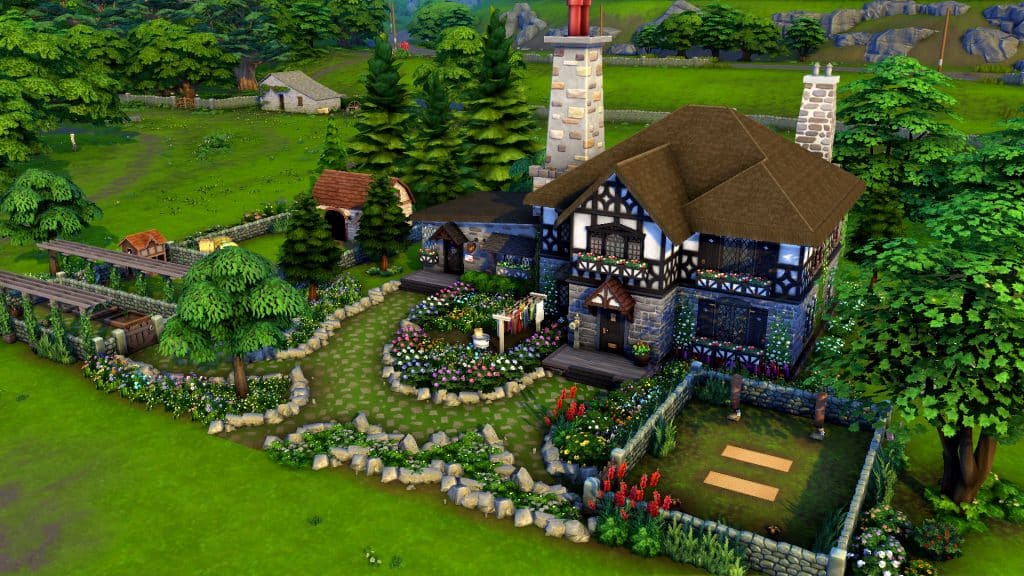 This is a revamp of an older lot I built many years ago before Off-the-Grid was an official feature in the game. It’s been updated to be fully compatible with the Off-the-Grid lifestyle and include Cottage Living content as well as other newer packs. This lavish medieval manor is attached to a blacksmith’s forge. It’s listed as a retail lot with items already set for sale but if you do have retail mods, you can change the zoning to residential and use your mod’s retail system to live here more easily. Without mods, purchase an empty lot as your “home,” then purchase the business. Travel there and stay there! 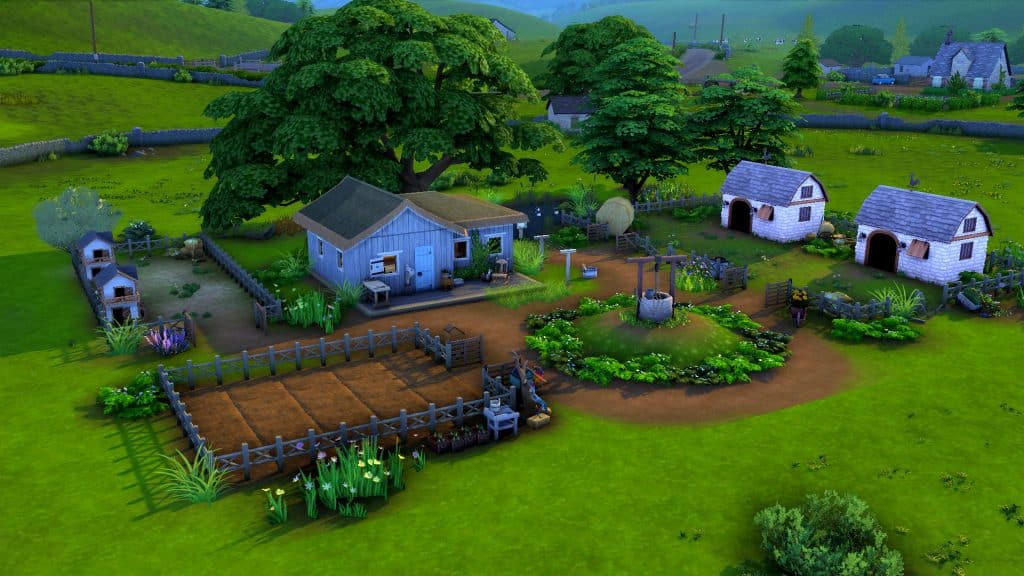 This starter farm for a family of eight is nothing more than a peasant hovel. The one room shack with beds and a kitchen crammed inside offers little comfort for the large family struggling to make a living here. They don’t even have an outhouse; only a bath outdoors under a tree and a bush to do their business in. But with animal sheds, a large garden, chicken coops, and a pond large enough for fishing, this run-down hovel has everything this family needs to make a better life for themselves with some dedication and hard work. 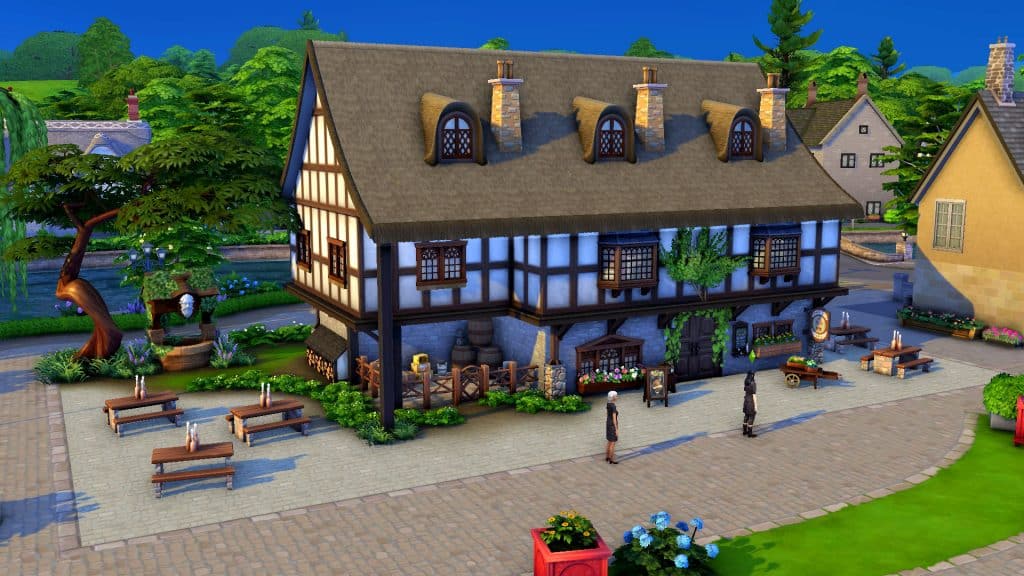 What would a medieval village be without a tavern?! Inspired by the tavern from The Sims Medieval, this popular village hangout boasts a bar, stage, and ample seating on the first floor, with a nice selection of inn rooms on the second level to accommodate weary travelers. Or perhaps just some Sims who’ve had too much ale and can’t stumble their way back home. 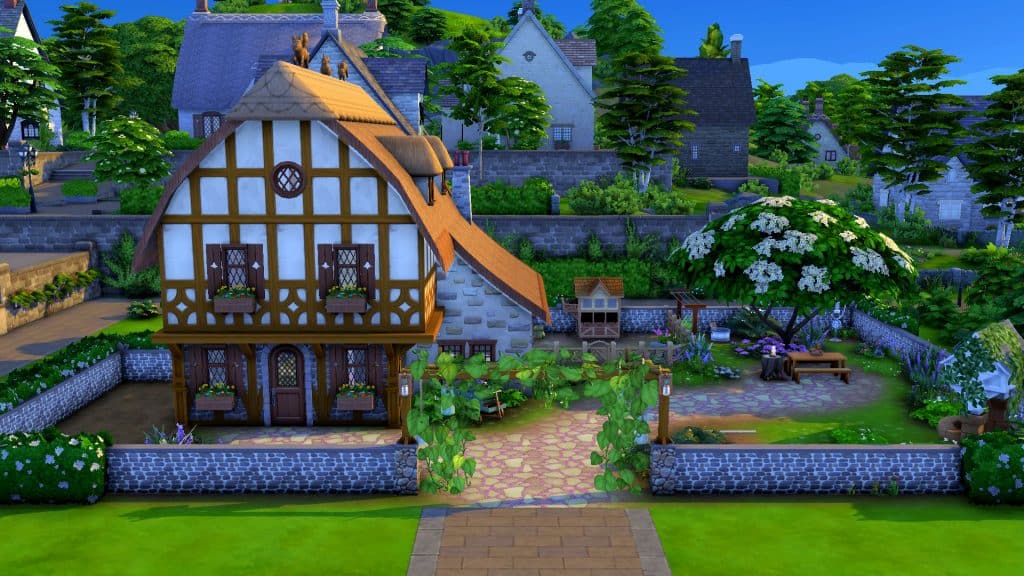 This cozy rental in the heart of the village is perfect for housing a family of nobles taking a holiday in the countryside. It can accommodate up to five Sims, including a child and a toddler, and has plenty of activities for the family to enjoy, including cross-stitch, knitting, picnics, horseshoes, and a wishing well. The coop and garden ensures they’ll eat nothing but the freshest eggs and produce on their trip. 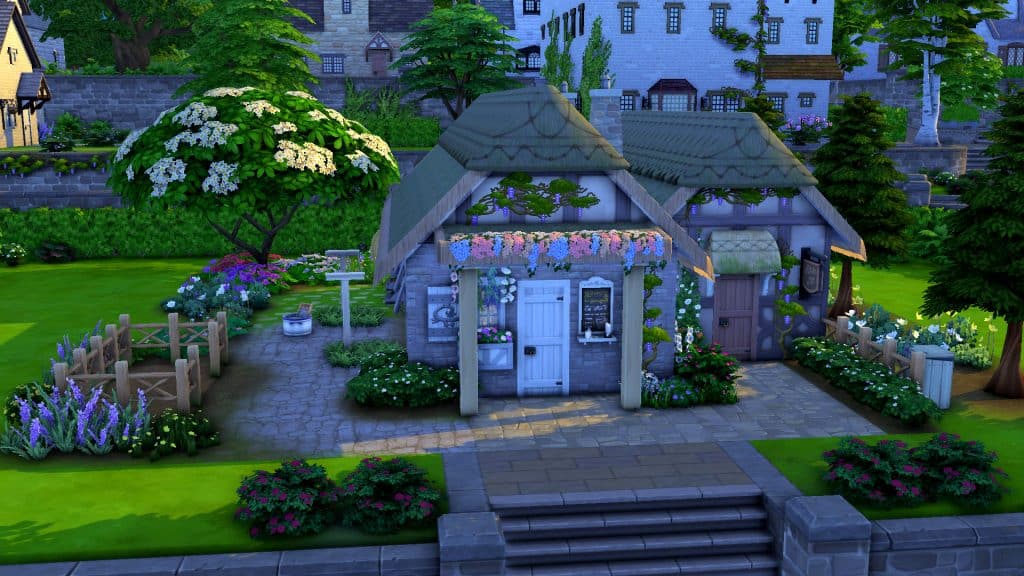 Sick during medieval times? Getting better isn’t as easy as ordering medicine on the computer. What is a computer??? Not to worry, the local clinic has medicine for sale and healthy treats to keep your livestock in good health, too. The apothecary next door is a great place for farmers and magic users to visit, too. It sells a variety of seasonal seeds, mandrake and valerian root, wraith wax, sacred candles, familiars, potions, and other herbs and trinkets. It’s a retail lot with items already set for sale but has a teeny tiny living space for a single Sim, too. 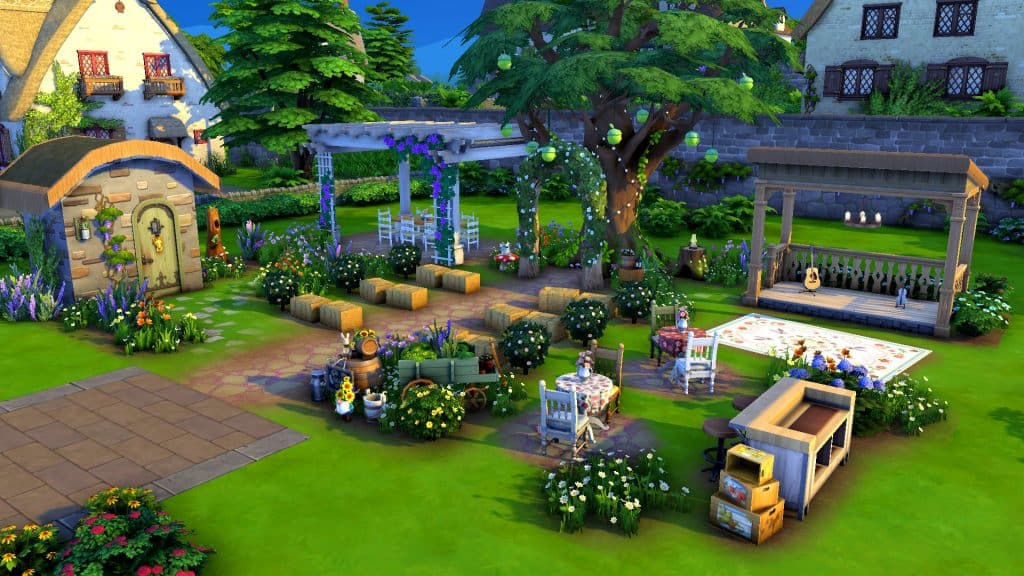 I built this quaint little wedding park when Cottage Living first came out but I realised it was the perfect spot for my medieval Sims to tie the knot too, so it went into my medieval world. The version in the Gallery is slightly different from the version pictured here but you won’t have to do much editing to this space at all. I swapped out the public bathroom for a medieval outhouse, replaced some lights with candles, and removed the stereo and microphone on the stage. Otherwise, this park is exactly the same.

I hope you’ll enjoy playing with these medieval builds as much as I enjoyed building them! I’m having a lot of fun living out my medieval fantasy in The Sims 4 without any of the limitations The Sims Medieval has.

You can find all these builds in the Gallery under the ID SnarkyWitch! Search the hashtag #snarkygoesmedieval to find them easier!