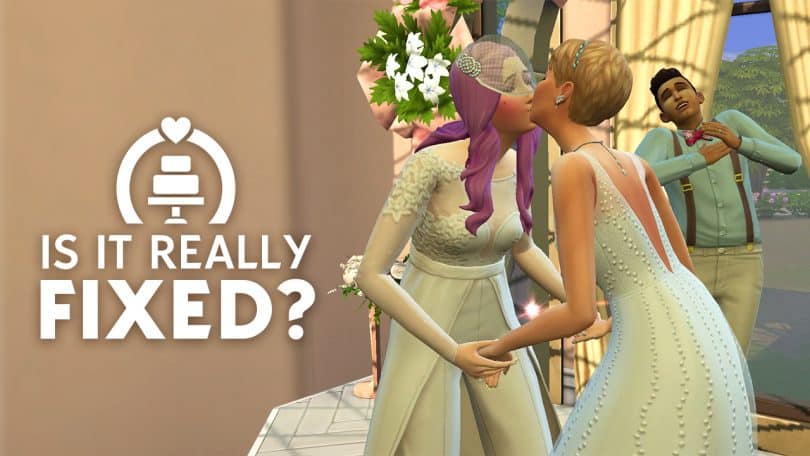 Is it fixed for real? The Sims 4 My Wedding Stories Edition…

The completely busted My Wedding Stories game pack has finally been fixed in a big update today! Or has it? The patch notes describe a long list of large fixes mostly focused on repairing broken autonomy at wedding events, particularly wedding ceremonies. This is great news but given The Sims 4’s history of “fixes” that didn’t really fix anything, we weren’t about to just trust their word for it. We wanted to hop in game ourselves and see if the patch really does fix everything that it promises to.

Please note we are playing on PC with an empty Mods folder and a cleared cache to eliminate any potential conflicts with mods. This is purely our own experience while playing; since everyone plays the game on different hardware and platforms, it’s possible that your experience with bugs may not be the same as ours. Because of this, we still recommend testing these features yourself before diving into them with a family you’re attached to.

Do Sims walk down all aisle lengths properly now? 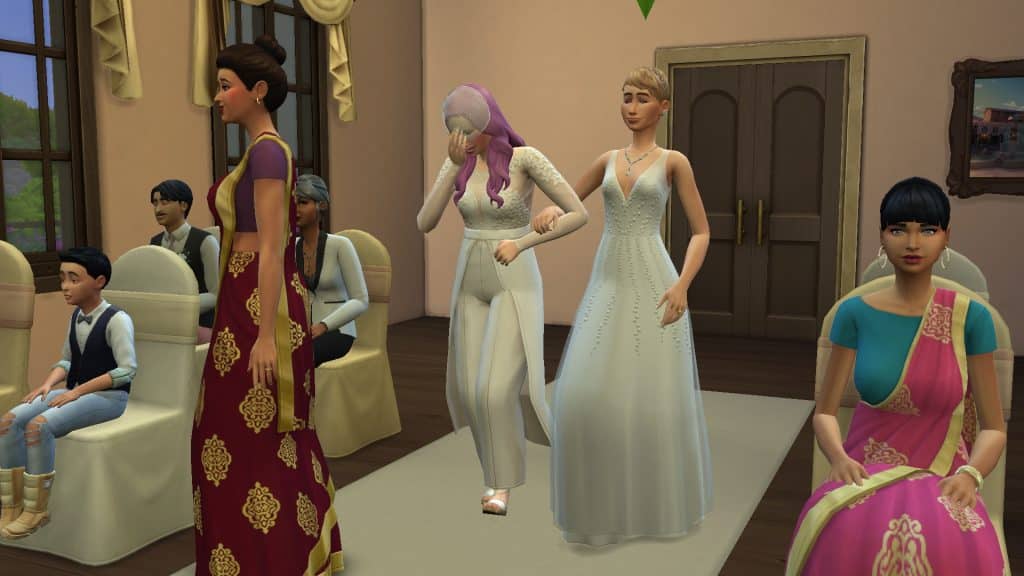 Our Sims did indeed all walk down the aisle perfectly when they were told to do so. The only issue we had was some Sims chose to stand in awkward spots, like in the middle of the aisle, after they were finished walking down the aisle. We noticed that they attempted to route away from it to stand off to the side but there was too much seating in the way. We recommend holding your wedding ceremony is a large area with lots of space around the arch so Sims can route to where they need to go more easily.

Does your Sim’s partner actually show up to their own wedding? 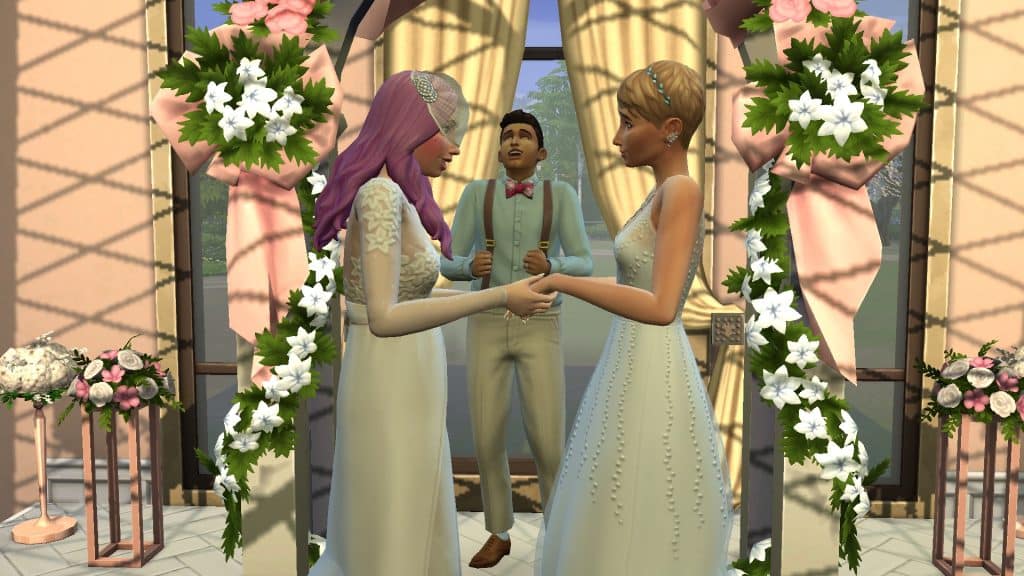 Both our brides showed up to their wedding! No cold feet here!

Do Sims walk down the aisle with their bouquet instead of putting it down right before? 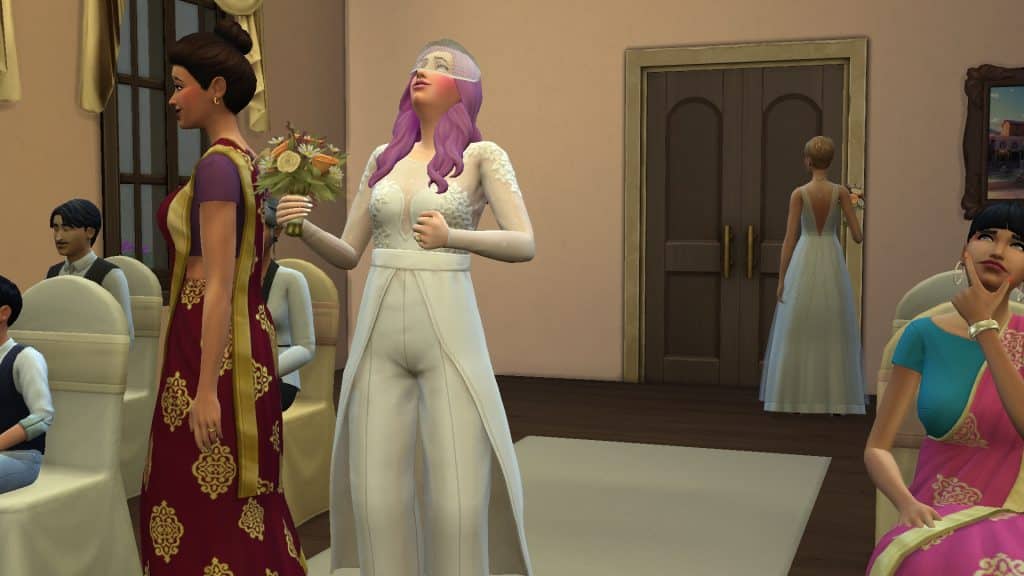 Are Ring Bearers and Flower Pals responsive to commands, including Walk Down the Aisle? 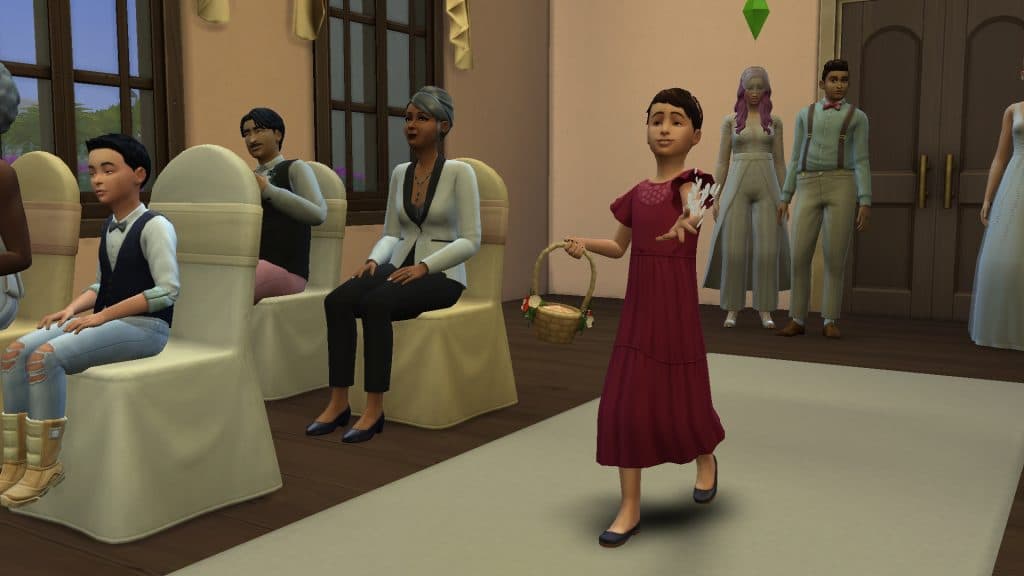 Our Ring Bearer and Flower Pal had no issues getting up from their seats to walk down the aisle when we told them to. What well-behaved children!

Do Guests and Officiants gather at the aisle when told? 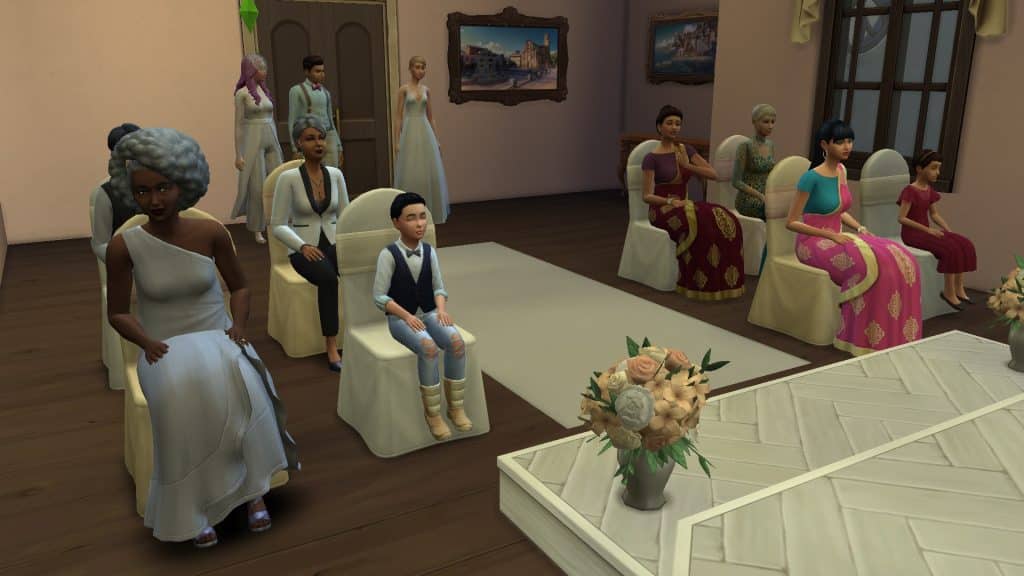 Everyone gathered exactly where they were supposed to for the ceremony, making it easier to instruct everyone to sit down in the right place.

Do Officiants actually do their job instead of standing around staring into space? 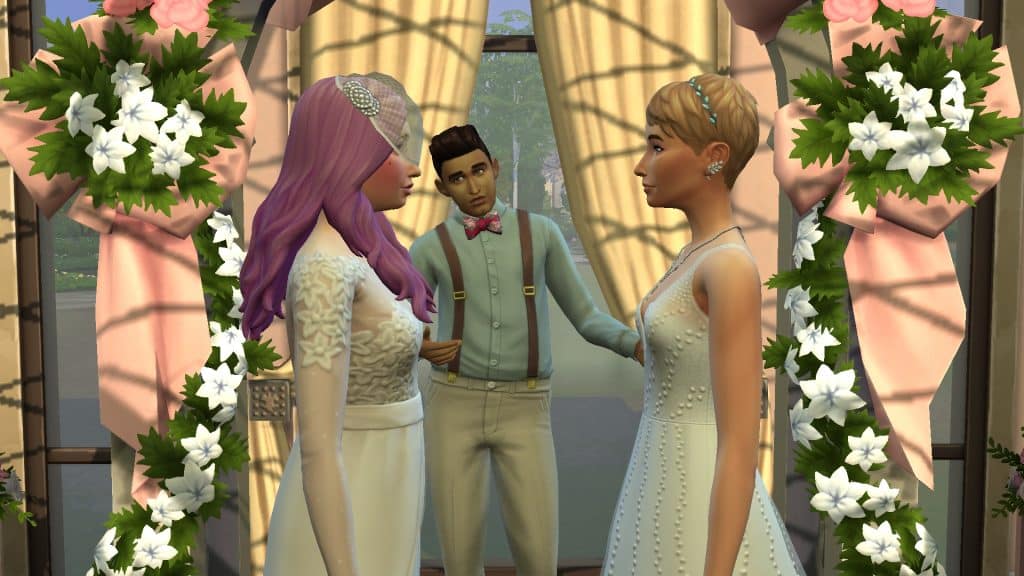 Our Officiant wasn’t the most experienced public speaker but he did do his job and did not get distracted midway through. He even took the initiative to go stand under the arch without being told right after our Flower Pal walked down the aisle! Good job, buddy!

Does the Spousal Kiss work properly? 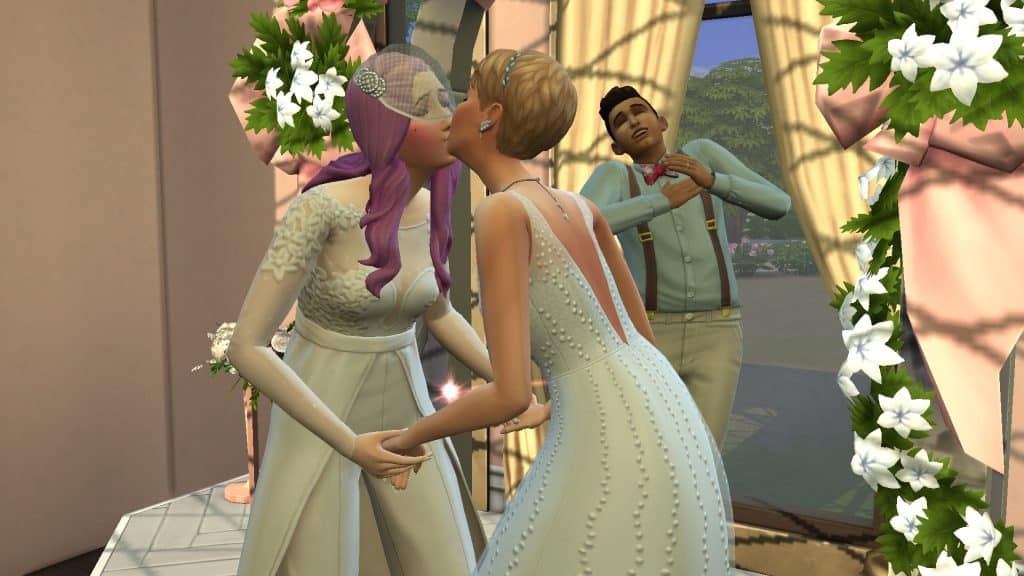 Our brides did not forget to kiss at the end of their vows and while they did have a bit of a mishap and bonk their heads together on the first attempt, it was actually adorable this time and not frustrating since the rest of the ceremony had gone really well.

Does cutting the cake with your spouse function as it should? 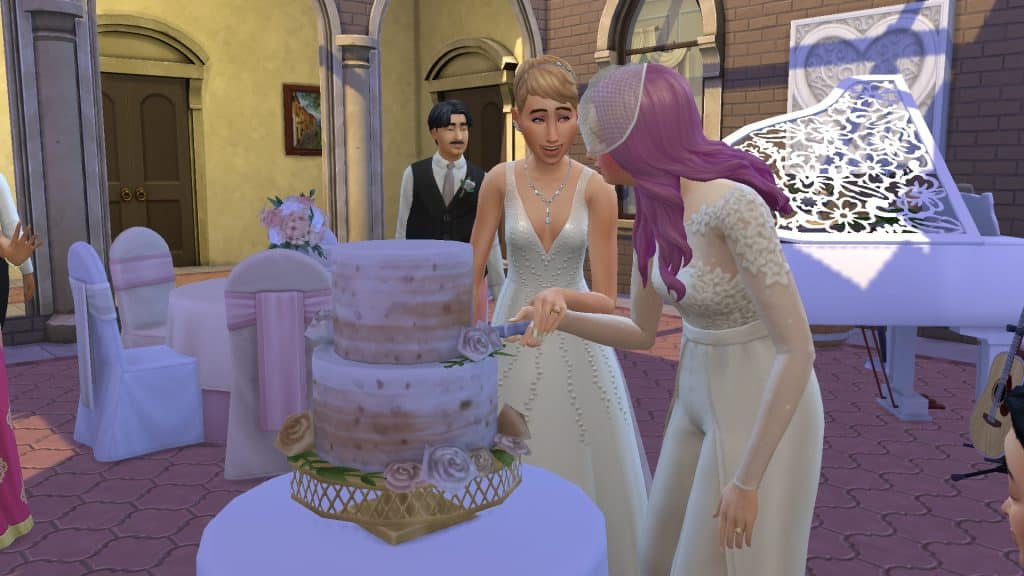 Assuming you picked out a cake and assigned it as your wedding cake before the ceremony, it will be in your inventory when the ceremony starts. All you need to do is place it in the centre of a dining table and instruct your newlyweds to cut the cake together after telling the guests to gather for cake. Our brides cut the cake together without any trouble and guests were pretty attentive during the cake cutting. Everyone autonomously grabbed a slice afterwards and our brides fed each other without any prompting from us. Oh, and wedding cakes take a day and a half to spoil now instead of 9 hours.

Do Guest lists show everyone both engaged Sims know? 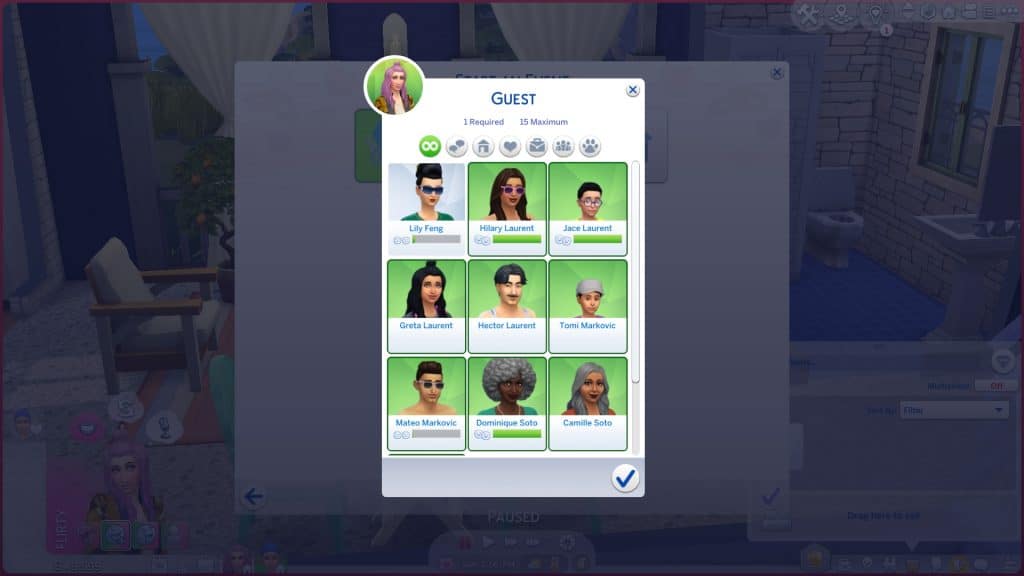 Everyone both of our brides knew were available to be invited as guests. No one got uninvited later on when the other bride decided to edit the event plans. 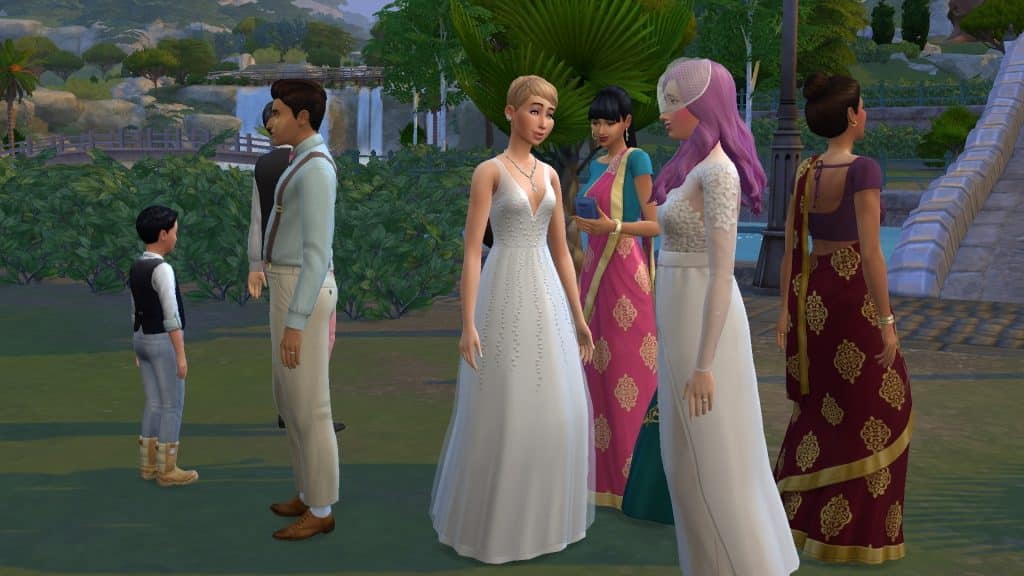 We told our brides to show up in the wedding outfits we selected for them and they did. We told the guests to show up in polished clothing and they all did! No issues here!

Can Sims get up from their seats to perform other player-directed actions after being told to take their seats? 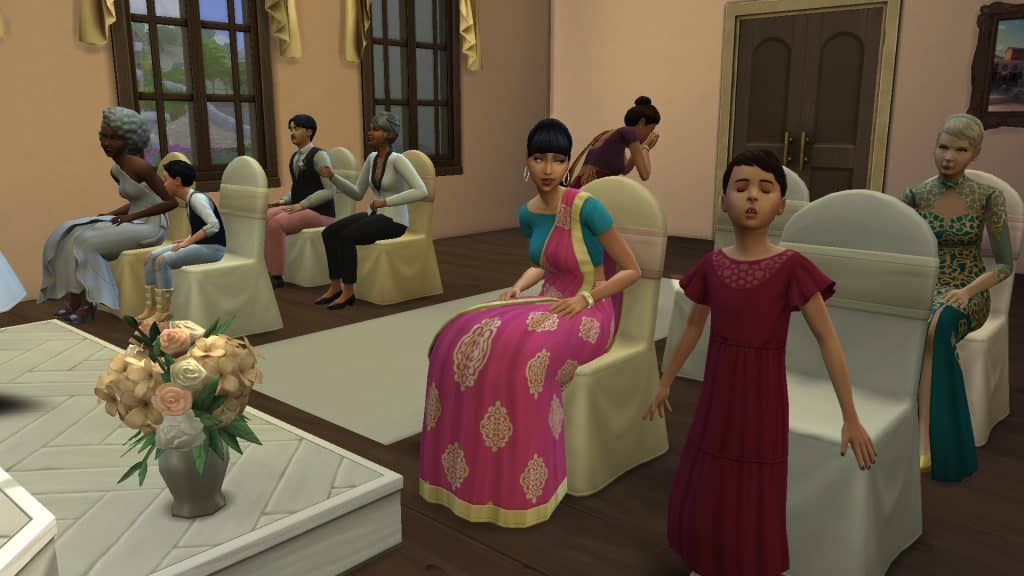 Our Sim of Honour, Flower Pal, and Ring Bearer had no issues at all getting back out of their seats to perform their ceremonial duties after we told them to take their seats. All guests got up from their seats with no trouble when we instructed them to gather for other wedding activities.

Do Guests pay attention to toasts and speeches now? 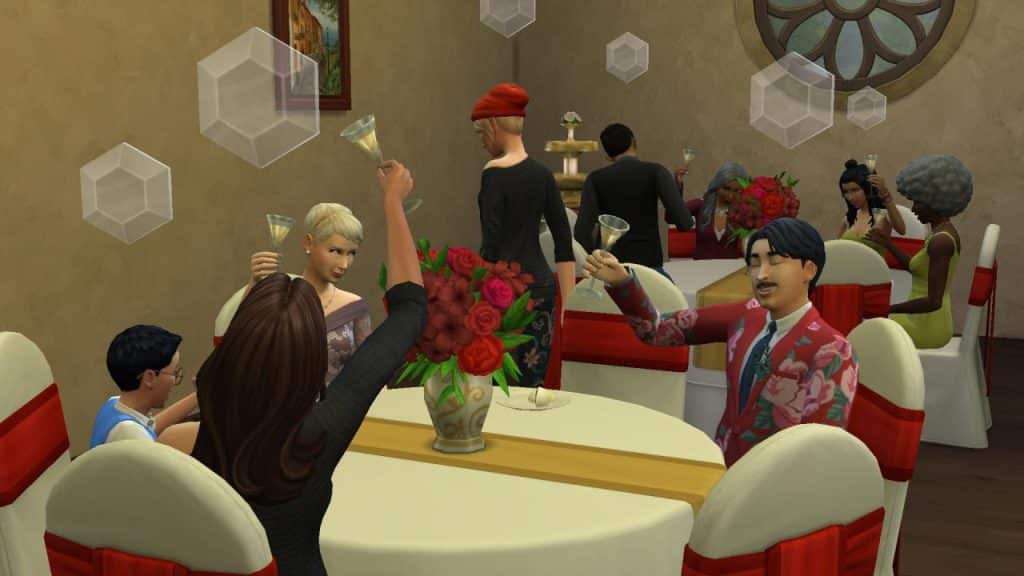 The toasts and speeches themselves worked just fine but it was kind of hit or miss for us as to whether everyone paid attention or not even though we did tell them to gather for those activities. Some listened. Some didn’t at all. Everyone did raise their glasses at the end of the toast, though.

Does the First Dance interaction function as intended? 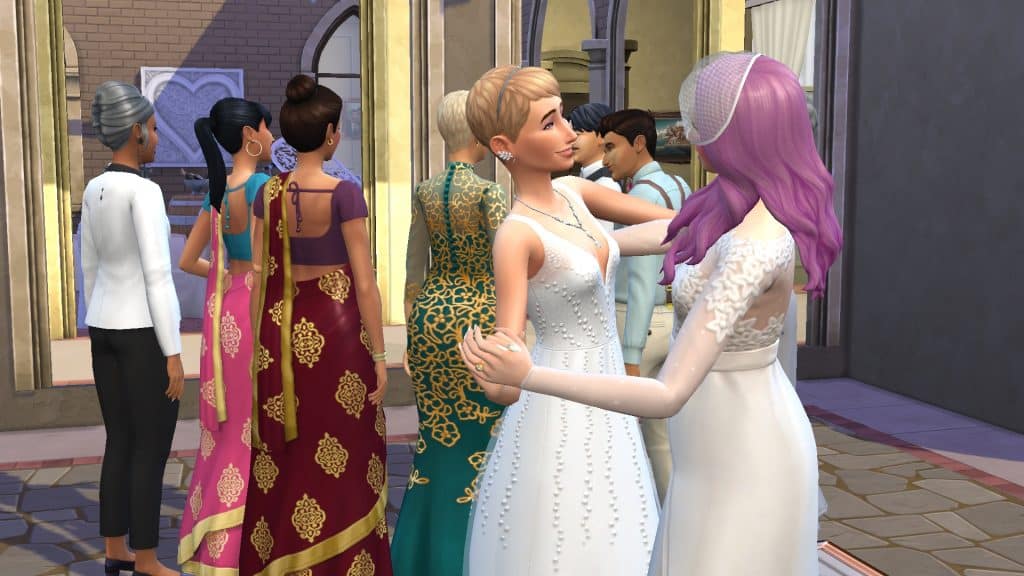 Our brides had a lovely first dance together but it’s a shame nobody watched it because they were too busy listening to the stereo behind them. That wasn’t exactly what we had in mind when we told everyone to gather for the first dance…

Does the bouquet toss work as intended? 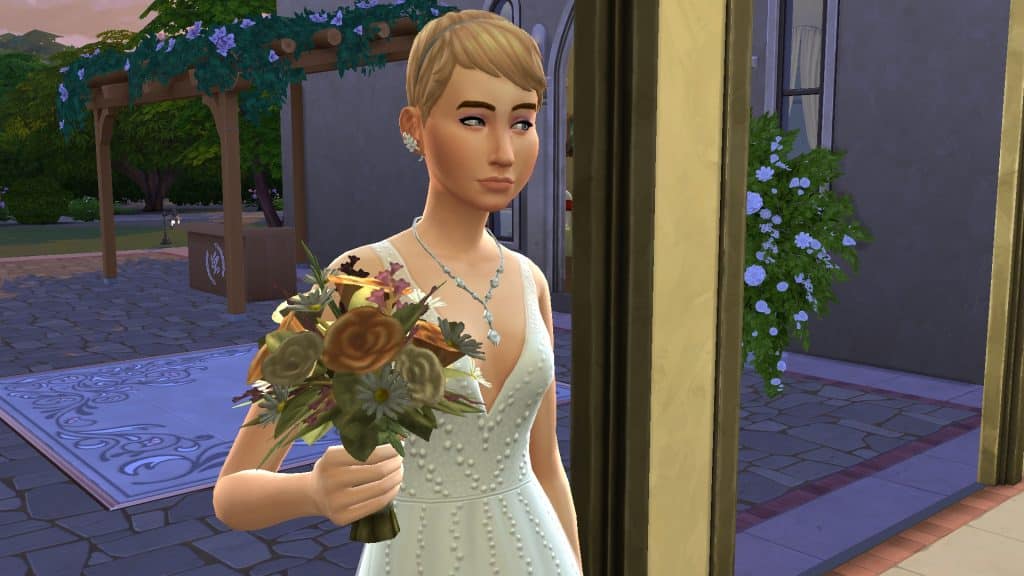 Yeah this still doesn’t really work. At all. Our bride did take out her bouquet and acted as if she was going to throw it but not everyone gathered for the bouquet toss. At one point, our bride seemed to grow impatient waiting for everyone to get the memo and walked over to where the guests were still dining to call them over. Only a few people took the hint and got up but there wasn’t enough space in the area to do a bouquet toss so the guests kept rearranging themselves while the bride continued to act as if she was going to throw the bouquet but never actually did. There wasn’t an option to call guests to a specific area for the bouquet toss so we couldn’t really move the bouquet toss back to the open area we initially started the toss at. We think this feature would work much better if a Call Guests for Bouquet Toss option was available when clicking on the ground to direct everyone to an open area.

Do Sims wear their party attire for this event type now? 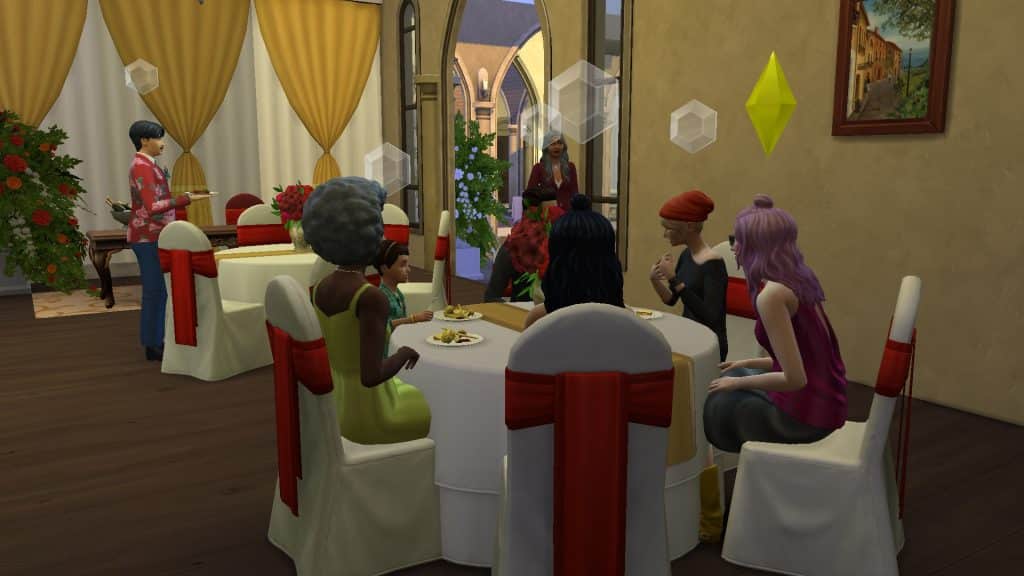 Not all of our Sims at our Engagement Dinner had party attire that was appropriate for this event but now that we know what outfit category to expect our guests to show up in, we can easily customize this in CAS beforehand if we need to.

Are there less rainy days in Tartosa for players who own Seasons? 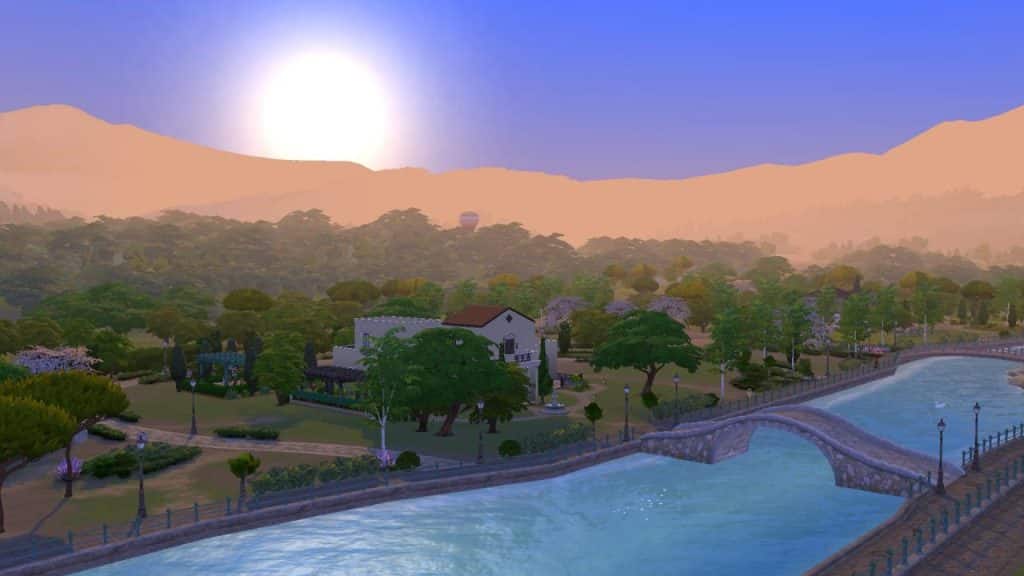 We played in the Spring season and experienced much more partly cloudy days than rainy days. We imagine there would be a lot more sunny days in the summer season.

While we dearly hoped to give it a 16/16, a score of 87.5% is still pretty great, especially considering the whole pack was a 0 out of everything when it launched.

So is My Wedding Stories fixed? For real? We say… yeah!