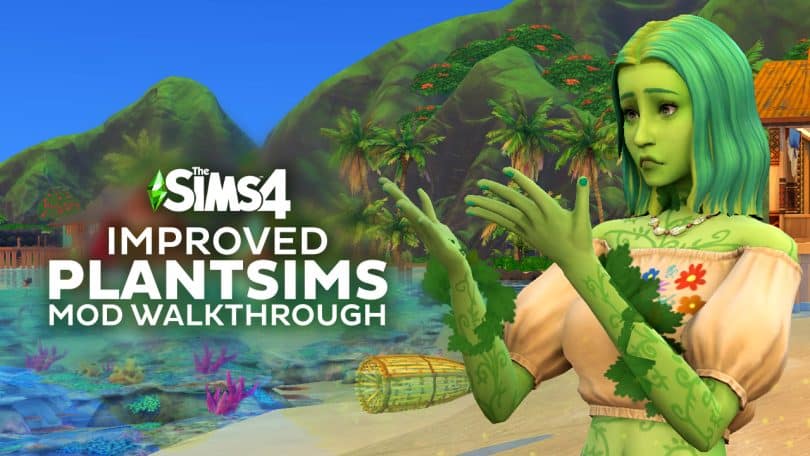 Keep your PlantSims forever and open up new CAS and gameplay options for them!

Before you ask, no, I will not stop talking about PlantSims. I’m obsessed, okay? For those of you who are still as obsessed with PlantSims as I am, a new mod that has just gone public aims to make PlantSims in The Sims 4 better. The PlantSim Lives mod by SrslySims enhances the PlantSim life state and makes PlantSims feel more like a real occult type.

We’re going to walk you through the whole mod and show you all the new functionality your PlantSims will have with this mod!

The PlantSim Lives mod is base game compatible and free for everyone to download. You can get it on SrslySims’ Patreon!

The second method is via the Rewards Store. For 500 satisfaction points, you can purchase the new PlantSim reward, which will give you a Forbidden Fruit in your Sim’s inventory.

And the third method is through finding the Sylvan Glade secret world! Explore the mysterious tree in Willow Creek and when your Sim arrives at the Sylvan Glade, they’ll have a Forbidden Fruit in their inventory.

But don’t worry; if you ever change your mind and don’t want your Sim to be a PlantSim anymore, you can undo it by purchasing the Plantophic-C reward from the Rewards Store for 500 satisfaction points. Drink the Plantophic-C item in your Sim’s inventory to become a human again.

Why did EA force all our PlantSims to have the same short spiky hairstyle? We may never know but with the PlantSim Lives mod, our PlantSims can be more unique and sport any hairstyle you want them to! When they transform into a PlantSim, they will keep the same hair they had before. This will allow you to go into CAS with them and change the hair to anything you like.

In addition to having customisable hair, SrslySims has also added some PlantSim-themed tattoos to give your PlantSims a more natural, earthy look. There is a full body tattoo of vines wrapping themselves around the Sim’s body as well as a small flower tattoo for the back of the neck. Both tattoos come in varying shades of green and brown and have multiple opacity levels.

PlantSims can do everything they could do before, like photosynthesize in the sun and fill their water motive by swimming, baths/showers, or drinking water but SrslySims has added some fun extras for PlantSims as well to further enhance your PlantSim gameplay.

For players with Seasons installed, keeping your PlantSim healthy can be difficult sometimes. When it’s rainy or cloudy, PlantSims can’t photosynthesize, which means they can’t eat and can starve! SrslySims has given us a way for PlantSims to take care of their motives even when the weather isn’t cooperating.

There’s a new menu option on fridges for PlantSims with some special drinks and recipes made especially for them. If you also use SrslySims’ Complete Cooking Overhaul, the PlantSim option will be under the occult recipes. In the drinks category, PlantSims can grab a can of Liquid Sunshine to fill their Hunger bar when they can’t get their nutrients directly from the sun itself. If your PlantSim is having a tough time with their Water motive, they can also grab bottled water from this menu.

While PlantSims generally don’t need to eat, they do have access to one special PlantSim recipe; a Bowl of Sunshine. This recipe requires Cooking level 7 to make and comes in single, family, and party sized portions. The optional ingredients for it are bell peppers and tomatoes. PlantSims can eat this to fill their Hunger motive when they can’t photosynthesize.

PlantSims also have new socials to make their conversations with other Sims more interesting! They have new friendly, funny, and romantic socials available as well as a self-interaction to go on a nature walk!

Friendly | Complain About Aphids – A PlantSim when sad/stressed/uncomfortable will get this new interaction.

Friendly | Complement Foliage – Any sim can complement a PlantSim.

Friendly | Discuss Gardening Tips – PlantSims can talk about gardening tips with other PlantSims.

Friendly | Talk About Nature – Any PlantSim can talk to any other sim about nature.

Funny | Joke About Devils Lettuce – Any PlantSim can tell a joke to another sim.

SrslySims says on her Patreon that she plans to add more to this list in the future and also recommends these additional PlantSim interactions by Triplis, which are fully compatible with this mod.

PlantSims have two unique Maxis animations. One is their photosynthesis animation where they glow and do a cute little “oh yeah!” motion. The other is the one where they sprout leaves on their arms and they pick one off in bewilderment. Both animations are adorable but they were both excessive. Your PlantSims would do this every couple of in-game minutes.

SrslySims has lowered the frequency of these idle animations so PlantSims will only do these things once every few hours instead of literally constantly. We still get all the cute PlantSim animations; they’re just not totally overwhelming anymore.

This mod is a complete game changer for anyone who likes playing with PlantSims! It pretty much has everything to make PlantSims feel like a proper, fleshed out occult like in previous Sims games. PlantSims have more customization options in CAS, special recipes to help them stay full no matter the weather, new socials and self-interactions, new ways to both become a PlantSim and reverse it, and did we mention PlantSims are a permanent life state now?

We cannot recommend this mod enough if you enjoy playing with PlantSims in The Sims 4. In fact, we’d consider it a must-have mod. I don’t think I could ever play with PlantSims again without this mod.