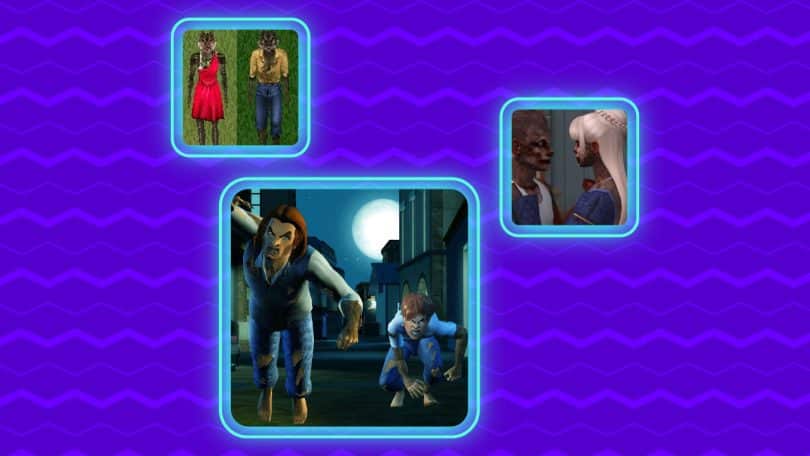 Sim Werewolves through the Ages!

While we are waiting for the official confirmation of The Sims 4 version of werewolves, it might be good to reminisce on the previous versions of this fan-favorite life stage, since every game in the franchise had them in one form or another.

It all started at the beginning, with The Sims: Makin’ Magic, the first supernatural Sims expansion. Werewolves we just a result of a “Beauty or Beast” spell and they functioned like every other Sim – same needs, same interactions, same everything, just hairy. They had fur covering their entire body, with a dress for girl werewolves and pants for boys.

After the purely cosmetic appearance in The Sims 1, the next game in the franchise had much more developed werewolves, and occults in general. Werewolves came out with the Pets expansion, alongside dogs and wolves.

Since it wasn’t possible to start playing as a werewolf, you had to become one. To do so, your sim had to become friends with the cursed wolf with glowing yellow eyes, known as the Pack leader. The wolf in question comes usually at night and it helps if you have a lot of trees and bushes on your lot. Of course, if you don’t feel like waiting, a more straightforward solution comes in the form of “boolprop testingcheatsenabled true” cheat, that summons the pack leader and saves you and your sims from waiting.

Once you are friends, the wolf will bite your sim and that’s it. After that, every night, your sim becomes a werewolf from 8 pm to 6 am and functions as a regular sim, until the personality of werewolf sims, slowly changes in a couple of days, turning into 0 Neatness, 10 Outgoing, 10 Activeness, 10 Playfulness, and 0 Niceness.

Werewolf sim can summon wolves or “savage” another Sim, turning them into werewolves and continue spreading the curse. If by any chance, you don’t feel like doing so, a fortune-telling matchmaker can cure Lycanthropy (werewolfness) with the Lycanthropic-B potion. A friendly witch could do the same thing wither own homemade potion.

Being a werewolf came with many perks like being able to train dogs faster and fighting off burglars! The downside was that the sim walks and talks like a werewolf and the wolf form can’t be modified, so you are stuck with a regularly dressed sim, but now with excessive amount of body hair.

The Sims 3 brought werewolves with the Supernatural expansion. This time, you could start playing as a werewolf or become one pretty easily during gameplay.

Werewolves live 1.5 times longer than regular humans and they could transform into their werewolf form whenever, just by clicking on them. The only exception was the night of the full moon when they are forced to do so and they scare unassuming sims in the vicinity.

In my humble opinion, The Sims 3 had the best and the most complex occults and werewolves at that point. There was a lot of stuff to be done, either if your sim is a lone wolf or a pack animal with leadership inclinations. For example, you can go “hunting” for collectibles alone or in a pack. Of course, there is a greater chance of getting something more valuable in a pack than solo. Also, the interaction with the other occults were pretty hilarious – playing fetch with witch’s wands or tag with fairies.

We shouldn’t forget that the kids and toddlers were included in the lifestyle, as they showed signs of lycanthropy early on. They could practice hunting by catching bugs and howling.

Werewolves in The Sims 4?

We’ve recently noticed new hints that werewolves might be coming.

Having in mind all the other versions of The Sims werewolves, and The Sims 4 itself, I can only speculate the Werewolves pack will function something like the Vampire one. With two forms and some kind of skill that goes with field experience, but at this point, we’ll just have to wait and see!