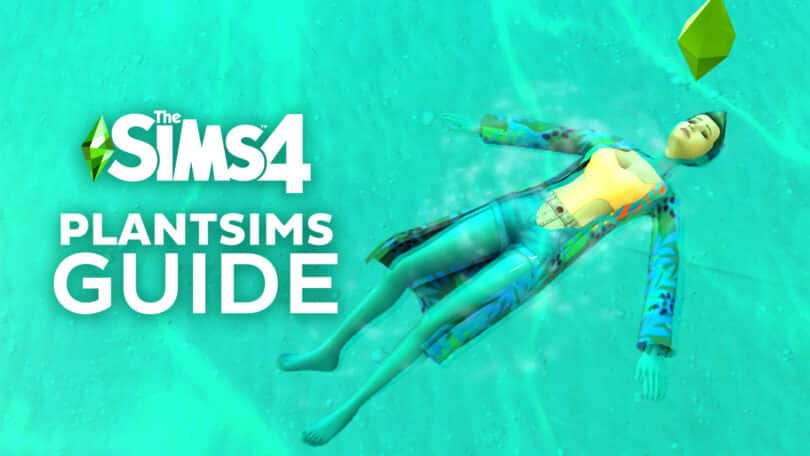 Become one with nature by literally becoming a plant!

Did you know there is an occult life state in the base game? Two, actually. Ghosts and PlantSims, but we’ll be talking about PlantSims today. Previously only found in the Seasons and University DLC packs for The Sims 2 and 3, respectively, PlantSims came to the base game of The Sims 4 for the first time in the franchise’s history. They were initially added for a limited-time event in April of 2017 but they stayed in the game afterwards as a sort of “secret” life state.

Sadly, PlantSims aren’t as in-depth as their predecessors but they can still be fun to play with. Here’s everything you need to know about becoming a PlantSim and caring for one!

Water the stump with all the beans arranged on it and watch it sprout up into a HUGE tree with an opening in the side for your Sim to explore! Exploring the tree will give your Sim a Forbidden Fruit of the PlantSim which they can then eat to be turned into a PlantSim.

PlantSims are not a permanent life state, unlike PlantSims from past Sims games. Your Sim will only stay a PlantSim for 5 days before they “wilt” and become a human again. There is no way to avoid this happening but if you have enough Forbidden Fruit, you can just keep eating the fruit every 5 days to immediately become a PlantSim again.

PlantSims have two animations that they do frequently. One is their photosynthesis animation and the other has them sprouting leaves on their arms and producing a cloud of pollen around them. You can’t direct PlantSims to do these things. They are autonomous idle animations.

PlantSims have some unique abilities that human Sims don’t have. Instead of a Bladder motive, they have a Water motive. This means they don’t need to use the bathroom but they do need to absorb a lot of water, either by being submerged in water or by drinking it. Without enough water, PlantSims can’t photosynthesize.

Which brings us to their next ability; PlantSims do have a Hunger motive but eating regular food will do nothing to satisfy it. PlantSims get their nutrients from the sun, just like a real plant! They need the sun to photosynthesize and fill their Hunger bar so make sure to keep your PlantSim outside during sunny days often so they can eat! You don’t need to do anything specific to have your PlantSim photosynthesize. They will naturally do so outdoors in sunny weather even while doing other tasks.

If your PlantSim is hungry at night or during bad weather when there’s no sun, they can absorb solar energy from their plants so it’s a good idea for any PlantSim to have a large garden in case of emergencies. Absorbing solar energy from plants will fill your PlantSim’s Hunger motive but it will also cause the plant to revert back to the sprout stage. It’s not ideal to rely on your plants for this reason. Try to use the sun to keep your PlantSim full as much as possible and only use plants as a last resort.

Although any skilled gardener can talk to plants, PlantSims will always have this ability no matter what their Gardening skill level is. Talking to plants replenishes the Social motive.

Players with Seasons installed will have to take extra care with their PlantSims! If the weather is cloudy or rainy, your PlantSim won’t be able to photosynthesize and could potentially starve! You can help minimize this danger by choosing a world for them to live in that is usually sunny. Sulani is ideal for both its abundant sun and water but a PlantSim could live comfortably in a desert world like Oasis Springs as long as they have a pool or a swimmable body of water nearby. Baths and showers will also replenish the Water motive but tubs and showers are usually only found on residential lots.

Although PlantSims rely on the sun to get their food, the sun can also dry them out if they aren’t careful. The Water motive depletes rapidly when a PlantSim is outside on a sunny day. Too much sun without water will make your PlantSim wilt and prevent them from being able to photosynthesize, which can lead to starvation!

Taking care of a PlantSim requires a delicate balancing act between sun and water so make sure you always have a close eye on their motives. PlantSims are fragile creatures.

If PlantSims in The Sims 4 leave you feeling underwhelmed, there is a mod that can help improve them in areas where they’re lacking. The PlantSim Lives mod by SrslySims makes PlantSims a permanent life state and adds more CAS customization for them, as well as new socials and new special PlantSim recipes. If you’re a PC/Mac player who likes to mod your game, we definitely suggest checking it out.