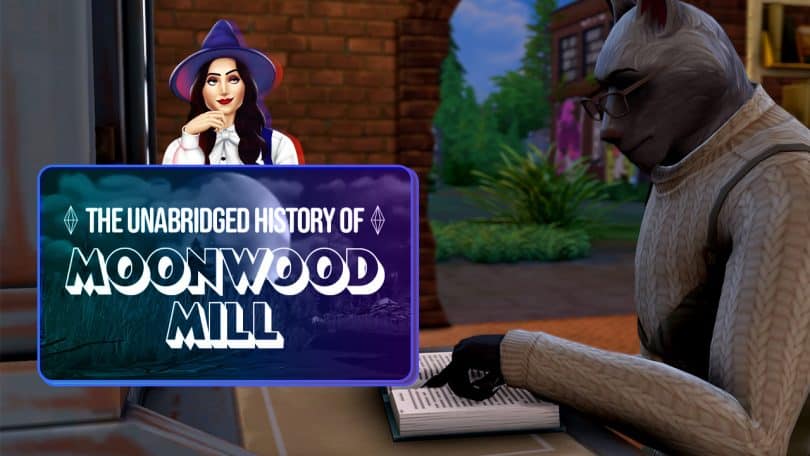 Want the lore but don’t want to sift through the fragmented info scattered around Moonwood Mill? We’ve done it for you!

The Sims 4 Werewolves comes with the most extensive background lore we’ve ever seen in The Sims 4 to date. It answers so many questions about not just how Werewolves came to be, but Spellcasters and Vampires as well. The lore explains many mysteries that the fandom has mused about for years but it’s all scattered throughout different objects and locations in Moonwood Mill.

Piecing it all together into a cohesive narrative isn’t the easiest of tasks but we’ve managed to compile the vast majority of the town’s history from all of these fragments and put it all together in a timeline.

May we present… The Unabridged History of Moonwood Mill, by SnarkyWitch.

Long ago, Moonwood Mill used to be an ancient Myshupotamian city. The Myshupotamians believed that the greatest minds of their society were reborn as wolves that howled to store their wisdom in the moon. As the moon moved through its waxing phases, the growing light each night represented the moon being filled with the wisdom of their wolf ancestors. On the night of the full moon when the moon had become full with this wisdom, the Myshupotamians wore wolf-masks and ceremoniously drew upon all of the moon’s stored wisdom. As the moon waned afterwards, the fading light represented the moon’s wisdom being dispersed amongst the people.

The Myshupotamians were also known for their ability to tame Cowplants. They used their Cowplant allies as stationary sentinels of defense to protect their people from threats. They also experimented with cross-breeding them to be mobile attack units; however, cross-breeding mobile Cowplants was a very difficult venture and they had limited success with this.

It is believed that the first Werewolves who would come later looked to the ancient Myshupotamians as their inspiration for harnessing the moon’s power.

In later times, a group of Spellcasters sought to use the moon’s powers as a means of enhancing their own magic. They took on wolf familiars and used the moon’s energy to draw upon their wolf’s nature and characteristics. These Spellcasters became the first Mooncasters. Records point to four individual Mooncasters as being the original Mooncasters: Greggorius Lunvik, Avalina Lunvik, Maria Volkov, and Yina Kia.

The four original Mooncasters performed a highly unstable spell from the Untamed school of magic atop Moonwood Mill’s Howling Point cliff to imbue themselves with the qualities of their wolf familiars. The spell was more powerful than they anticipated and caused an overload which transformed them into the first Werewolves. This overload also created the moonpetal flower and infused Lake Lunvik with lunar energy which in turn created the Luna Fish. Later, the moonpetal and the lunar waters would play a large role in the Mooncasters’ ceremonies. The newly born Werewolves embraced their new existence but each had a different view about what it truly means to be a Werewolf.

Greggorius’ (yes, THAT Greg’s) wolf familiar was named Brutus. Brutus was a fearsome alpha wolf and through him, Greggorius also adopted the beastly strength of his familiar. Avalina Lunvik was his wife and they were very close friends with their fellow Mooncaster, Yina Kia. However; Greggorius and Maria Volkov were often embroiled in intense disagreements with each other.

Avalina’s wolf familiar was named Gibby. Gibby had a special connection with the moon, which enhanced Avalina’s fascination with the night sky. She dedicated much of her life to studying the moon and the cosmos. She was convinced that her research would aid her husband’s efforts to experiment with his Fury.

Maria’s wolf familiar was named Verity. Verity had a distinguished, princely nature which enhanced Maria’s dedication to enrichment and diplomacy. She was often at odds with Greggorius and felt like Greggorius was just jealous of her ability to control her Fury. Maria’s husband was named John and their son is Kristopher Volkov, who is currently the Moonwood Collective’s alpha. Maria is also the author of A History of Moonwood Mill, one of the books that can be found at the Moonwood Mill library.

Yina Kia’s wolf familiar was named Renga. Renga had a love of adventure and passed his Wanderlust into Yina. Yina was married to a non-Werewolf named Emmy, who disliked her wife’s thrill-seeking nature and just wanted to settle down. Yina’s thirst for action led to her demise when she was killed by a Cowplant of the Moocasters (Not to be confused with Mooncasters; more on them shortly). Her best friend, Greggorius, was deeply affected by her death and Renga remained glued to Emmy’s side until his dying day.

Old records also name Kiyah, Logan, Mikal, and Wugbug as wolf familiars of the original Mooncasters. It’s unclear if these are aliases for Verity, Renga, Brutus, and Gibby. They may also be the familiars of other unnamed Mooncasters. It’s also possible that the game developers changed the names of the wolves midway through production and simply forgot to update the names in all text strings.

One might say that the Spellcasters’ own hubris proved to be their downfall because they are responsible not just for the creation of the first Werewolves but also the first Vampires. Ultimately their mistakes led to the destruction of their own Realm and a centuries-long war that almost wiped them out of existence.

The Spellcasters were experimenting with creating duplicates of themselves but they became frustrated that these duplicates still needed food to survive. To try and maximize the efficiency of these duplicates, they fed them potions and in doing so, created monsters. The potions turned the duplicated Spellcasters into permanent mutations who turned on their creators, feasting upon them. The magical blood of the Spellcasters they consumed enhanced their strength and thus became the first Vampires. This event was the catalyst that started a grisly war between Spellcasters and Vampires.

In an effort to eradicate all the Spellcasters, the Vampires launched Operation Eternal Flame; a covert mission to turn every last Spellcaster into Vampires.

In response to Operation Eternal Flame, the Spellcasters divided into two groups; Mooncasters and Moocasters. Both drew inspiration from the ancient Myshupotamians and both were united in their efforts to thwart Operation Eternal Flame but their methods differed. While the Mooncasters focused on drawing down the power of the moon to amplify their powers, the Moocasters revived the Myshupotamian practice of taming and cross-breeding Cowplants to use as weapons against the Vampires. Unlike their ancient ancestors, the Moocasters had great success with cross-breeding their Cowplants.

At first, the Mooncasters and Moocasters enjoyed a prosperous alliance, working together to fight against the Vampires. The alliance fell apart when one of the original Mooncasters, Yina Kia, was killed by one of the Moocasters’ Cowplants during a joint defense mission. With the Spellcasters now at odds with each other, the Vampires gained the upper hand in the war and pushed the Spellcasters to the brink of extinction.

Near the end of Operation Eternal Flame, the last remaining Spellcasters attempted to harness unstable magic once again in desperation to save their kind. They derived a spell from the Untamed school that could cure every Vampire in the world. One spell that could reach across the globe and turn every Vampire human, wiping them out forever. The spell was too powerful and backfired on them, causing a massive overload that ripped The Magic Realm apart. To this day, The Magic Realm is still in fragmented pieces from this disastrous spell gone awry.

As time passed and the Mooncasters had children, it became apparent that unlike other magical beings, Lycanthropy wasn’t guaranteed to be passed down through the generations. Some of the Mooncasters’ children were both with dormant wolf genes. These children sought out a way to awaken those dormant genes. They discovered that swimming in Lake Lunvik under a full moon would awaken the dormant wolf and complete their transformation.

Many years later, closer to modern times, refugees fleeing from conflict came to settle in Moonwood Mill, although they simply called the area The Moonwood when they arrived. They gave it this name because they believed the densely forested area was imbued with lunar energy.

The founding settlers in The Moonwood built the town’s sawmill and factories. The mill and the factories allowed the town to flourish and people flocked there for both employment opportunities and a more rugged life close to nature. Over time, the mill became embedded in the identity of the town and The Moonwood began to be called Moonwood Mill.

During the height of the Moonwood mill’s productivity, the mill’s founders established The Moonwood Collective; an organization that encouraged its members to strive towards self-sustainability, diplomatic communication, and communal contribution.

The Diary of Greggorius Lunvik mentions something called the Century Conflict and states that following this conflict, the remaining Werewolves scattered around the world but Kristopher Volkov chose to stay. It’s not entirely clear whether the Century Conflict refers to Operation Eternal Flame or if this is another conflict that happened later that might explain why the once-prosperous Moonwood Mill now lies abandoned. One theory is that perhaps the human settlers in Moonwood Mill were frightened by their Werewolf neighbours and left the town but I didn’t find any specific information in the game that confirms or challenges this theory.

Did we miss any important information about the history of Moonwood Mill? Tell us in the comments! Maybe you can spot something we didn’t!