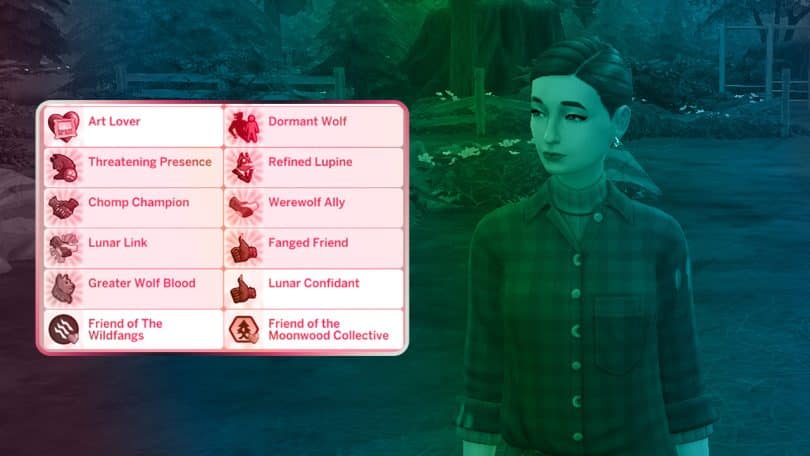 All about 11 New Traits and how to obtain them!

There are a total of 11 traits in The Sims 4 Werewolves; however, none of them are base personality traits that can be selected in CAS. All the new traits are tied to aspirations, obtained through gameplay, or inherited from werewolf parents.

Some of the trait descriptions are self-explanatory about their effects. Others are more cryptic but we’ll break down how to obtain each trait and how to “unlock” the effects of certain dormant traits.

This trait can be obtained by both Werewolves and non-Werewolves. Basically, it makes you an honourary member of the Wildfangs wolf pack rather than an official member. Essentially, you become their ally and you get some new social interactions with that pack’s members. You can also use their hangout to rest and drop off gifts for the pack.

Friend of the Moonwood Collective

This is the exact same thing as the Friend of the Wildfangs trait, just for the Moonwood Collective. You’ll become a Moonwood Collective ally and unlock new socials with that pack’s members. You can use their hangout to rest and drop off gifts for the pack.

This is a reward trait for finishing the Werewolf Initiate aspiration. It provides a small boost to all relationships which will be helpful when pursuing any of the other werewolf aspirations that become available after completing this one.

This trait is handy for werewolves who have become human again because they still get to enjoy the benefits of the moon phases they had when they were werewolves. Being able to howl is just a fun bonus.

This is a handy trait for filling up your world with werewolves and growing your pack without incurring any negative feelings from your unwilling participants. It will also make them more receptive to joining your pack immediately.

This is a great trait to have if your werewolf Sim is more civilized than those Wildfang brutes and wants to live as normal a life as possible as a werewolf. This trait permanently decreases their Fury gain, meaning they’ll lose control of themselves less often. When paired with other werewolf abilities such as Somber Howl and The Will to Resist, your werewolf may be able to avoid ever losing control, or quickly regain control if they do.

On the flip side, if you want to play the most terrifying, beastly werewolf Moonwood Mill has ever seen, you’ll want this trait. All nearby Sims will become terrified wherever you go and many of them will faint from fear. Your Sim will also no longer fear Greg, as your own fearsomeness has surpassed his.

This trait is interesting because there seems to be several ways to obtain it. We’ve gotten this trait by reading Beyond Big & Bad: Rethinking Harmful Werewolf Stereotypes at the Moonwood Mill library. We’ve also gotten this trait by pursuing werewolf aspirations. The Werewolf Diplomacy dormant ability will also give your werewolf the ability to bestow this trait on other Sims. There might be even more ways to get this trait that we haven’t seen, yet.

As the description suggests, Sims with this trait won’t be as terrified of werewolves as other Sims, making it easier for werewolves to have positive interactions with them.

Werewolf lineage isn’t as straight-forward as other occults. Normally, there’s a 50/50 chance a child will be born as the same occult type as their parents. For example, a vampire and a spellcaster are guaranteed to have either vampire or spellcaster children. It’s a 50/50 chance which occult type the child will be. With werewolves, a child isn’t always guaranteed to be born as a werewolf, even if both parents are werewolves. They might instead be born as a dormant wolf.

Sims born with this trait are humans and will remain humans their entire lives unless they “awaken the beast within.” The description is deliberately vague to make you figure this out yourself but we’ll tell you how to awaken a dormant wolf. Have your dormant wolf swim in Lake Lunvik at night during a full moon when they are a teen or older. They will transform into a full werewolf when they come to shore.

This trait is essentially the opposite of Dormant Wolf. Babies born with this trait are usually (but not always) born as werewolves; however, if they become werewolves later on, they’ll gain werewolf XP at a faster rate, allowing them to rank up more quickly and buy more abilities. It’s similar to the Weak/Strong/Ancient Bloodline inherited traits for children of spellcasters.