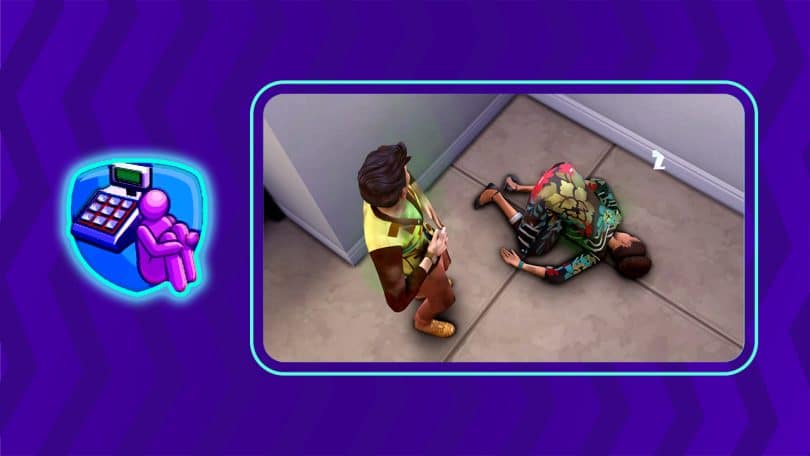 Help a stressed retail worker establish self care in this new permanent scenario!

The latest SDX drop for The Sims 4 has added two new scenarios to the game; one limited-time scenario and one permanent one. The permanent scenario is called In The Moodlet and is all about controlling your Sim’s emotions.

We’re going to walk you through how to complete this scenario!

On the main menu when you select the In The Moodlet scenario, you will see that this is listed as an Easy scenario. This scenario is permanent so there’s no need to start it by a specific date. It’s here to stay in the game forever.

The scenario description states that your Sim works a very stressful retail job and could use some help with their self care. You’ll need to help them control their emotions and find productive outlets to relieve negative emotions. The household requirements are simple; you just need one Young Adult or older Sim. When you start the scenario, your Sim will start out at level one of the part-time Retail career and they will have an easel and the new moodlet lamp in their inventory. Both of these will be helpful to you.

Once again, the goals on the info screen are weirdly vague but once you get in-game, you’ll see that there is a pretty extensive list of specific goals your Sim will need to complete. Your Sim must complete all the goals to finish the scenario:

Getting In the Moodlet

I had no idea what the goals were for this scenario until I actually started it so I had to guess at my Sim’s traits. I just quickly slapped some styled looks on a randomized Sim and hopped right into the scenario. I moved her into one of the starter apartments in San Myshuno.

It was very easy to knock out a few of the goals right away. All I had to do was place the moodlet lamp in her apartment and enable the emotional aura on it. Boom. Get into a positive emotion and enable emotional aura goals already done in the first three seconds of gameplay.

Getting into a more intense emotional state proved to be a little trickier. Since my Sim is Self-Assured, I decided to use the Confident emotion to my advantage. I had her brush her teeth and psych herself up in the bathroom; both activities give a Confident moodlet. Then I had her stand in the room with the moodlet lamp to boost the Confident emotion with a Happy moodlet. Nothing. I tried a bunch of different things; filling the house up with plants to further provide a Happy boost to the Confident moodlets, working out to a Plumboomba dance video for an extra Confident moodlet. Finally, I got fed up and just plastered a bunch of expensive wall art with high Environment scores all over the walls. That finally did the trick.

For players who have the Plumbob mood lamp bonus items from purchasing The Sims 3 expansion packs, these will provide you with an added advantage in this scenario. You’ll be able to boost almost any positive emotion you want with the lamps.

But don’t worry if you don’t have the Plumbob lamps. They aren’t necessary to complete the scenario and the scenario itself helps you out by occasionally slapping your Sim with some of the negative emotional moodlets they need to take care of a few of the scenario goals.

Sims who have completed the Painter Extraordinaire aspiration receive the Expressionistic reward trait, which allows them to paint all the emotional paintings no matter what emotional state they are in. Players who own the Snowy Escape expansion pack may also be able to use the Surge Emotions ability to put their Sim in the desired emotional state to paint the emotional paintings. This ability is acquired by doing meditative tasks for a long period of time, such as painting, reading, hiking, and spa activities.

The positive emotions were not so difficult to achieve. It’s easy to become Playful just by watching the Comedy channel or taking a bubble bath. Brushing your teeth or psyching yourself up in a mirror makes you Confident, and Freshening Up in a mirror makes your Sim Flirty. It’s the negative emotions that aren’t always easy to get into, which is why I recommend a negative trait to help with this.

My Sim was not able to become Angry at all until she got woken up in the middle of the night by her noisy neighbours. Rather than rushing over to pound on the door and yell at them right away, I took the opportunity to start an Angry painting while I had the chance. Erm… did she paint what she wishes she could do to her neighbour’s apartment? Yikes…

Ahem. Anyway, when she did go scold the neighbours, elderly Geeta Rasoya walked out in just a towel. Geeta, you stole the spotlight by dropping dead in my last scenario playthrough. I really don’t even want to know what you were busy doing in this playthrough.

As for the Sad painting? Well, Geeta dying again would have actually been extremely helpful in this playthrough but of course that didn’t happen. Stuff like that never happens when I actually want it to. I had a secret weapon up my sleeve, though. Enter Tragic Clown! Go on. Look at him. Look at the tragedy reflected in his eyes and weep.

Success! With my Sim appropriately Sad by the tragedy of the Tragic Clown, I was able to complete the Sad painting and complete this scenario goal. I also had her call the Sadness Hotline while I had the opportunity to knock out another goal. Call Sadness Hotline is an option on the cell phone that’s only available while your Sim is Sad.

Most of the rest of the scenario goals revolved around interacting with other Sims. I ended up getting kind of lucky when my game glitched out and the Welcome Wagon event never started but the Bheedas were left standing outside in the hall with their gross fruitcake for days on end. This meant someone was always available to socialize with at any time of the day or night. Weird, but I’ll take it.

My Sim got Embarrassed and Tense moodlets fairly often thanks to the scenario so it wasn’t too difficult to Complain About Problems to Jesminder and Share Insecurities with her. I did feel like kind of a jerk complaining about my problems to a pregnant lady who just passed out in a puddle of her own pee, though. Like maybe she’s got bigger issues than I do, you know?

It wasn’t so easy to calm down an Angry Sim. At least not at first. My first plan of action was to find an Angry Sim stomping around the Spice District and I thought I lucked out when a protest started in the area; protesters are always Angry! But unfortunately, you actually have to succeed in calming down an Angry Sim; just doing the interaction isn’t enough. This never works unless the two Sims are at least Good Friends.

When I hovered over the goal to see if there was another way to complete it, I discovered that this goal can also be completed by calming your own Sim down in a mirror while they’re Angry. That was much easier to do! I just made a bunch of copies of her Angry painting and enabled the emotional aura on all of them to give her a strong Angry décor moodlet. Then I had her calm herself down in the mirror.

Successfully In the Moodlet

As for the goal to shower while Uncomfortable, I completed it by accident. I don’t even remember completing it but apparently I did unintentionally at some point during the scenario. So I finished the scenario in 2 Sim days without any cheats.

The reward for this scenario is 4 potions of every emotional potion available in the game. Once again, thanks… but I’d rather get my 5,000 satisfaction points.

The scenario worked fine. I didn’t experience any bugs with it apart from the Welcome Wagon issue which didn’t negatively impact my ability to complete the scenario. Still, it was a pretty dull scenario. For newbie players, it’s extremely helpful for them to learn about the mechanics of the emotions system. For veteran players who already know the emotions system inside out… there isn’t anything of interest for you with this one. The reward isn’t even all that great.

I also have the same gripes with this scenario as I did with the Best Friends Forever scenario; we should get a detailed breakdown of all the goals on the main menu screen so we can plan our household accordingly. If the rewards for every scenario are going to be different from now on, we should also see the rewards on the main menu so we can decide if the reward is worth the time and effort of playing the scenario. If I’m being honest… I’d still rather they go back to giving 5,000 satisfaction points for every scenario. I liked being able to decide which rewards I wanted to buy with my points.