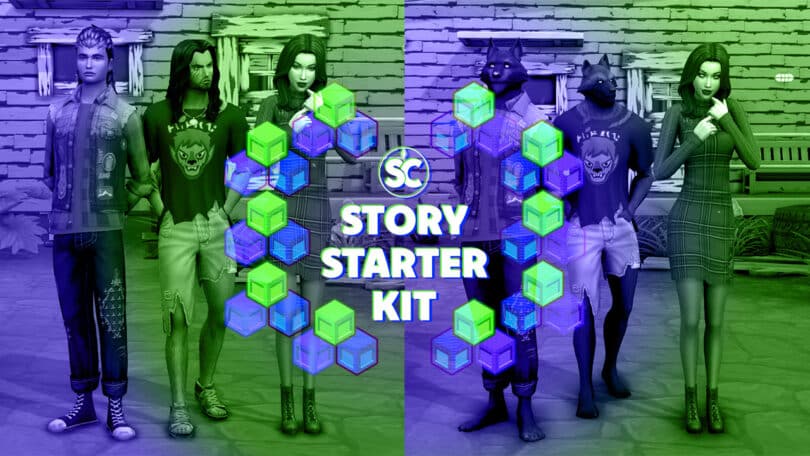 Two brothers torn apart by forbidden love. Can everyone learn to get along or will things get ugly?

This month, we’re bringing you a teenage couple in love. The catch? One’s a vampire, the other’s a werewolf and their romance is tearing this young werewolf’s tiny pack apart.

Ever since that fateful camping trip when Lucian was a teenager and his younger brother, Talon, was just a kid, it had been just the two of them on their own in the world. Lucian had begged his parents to let him take his kid brother to Moonwood Mill for a weekend camping trip at the end of the summer. He thought it’d be the adventure of a lifetime; the perfect opportunity to make some memories and do some brotherly bonding before school started up again. His parents thought the same and agreed.

But on their first night in the woods, they took a wrong turn on a hike and wound up lost, wandering in the tall grass near Lake Lunvik. Stumbling upon an old trailer, the boys banged on the door, begging for help only to be confronted by a monster. They ran but they couldn’t escape. They spent the rest of the trip wracked by fevers, chills, and strange hunger pains and by the last night… they had become beasts.

Too scared to return home as the monsters they were, Lucian stayed in Moonwood Mill with his brother, leaving behind bloody garments at their old campsite to make the search and rescue team that came to look for them think the boys had been killed in a bear attack and dragged off somewhere they’d never be found. Lucian felt personally responsible for what happened to his brother and took him under his wing, raising him like a son.

Eventually, Lucian and Talon found their place with the Wildfangs, a pack of brutish werewolves who embraced their beastly natures. They taught the boys everything about how to truly live wild and free. They also taught them all about their sworn enemies; the vampires. Those fanged bloodsuckers were enemies of spellcasters, and as descendants of the spellcasters, the werewolves despised them as well.

Feeling like fully embracing the Wildfangs and their teachings was the only way to guarantee protection for his little brother, Lucian believed everything the Wildfangs taught him and in turn, also taught Talon to hate vampires… until the day Talon found a frightened girl about his own age lost in the woods near their dilapidated trailer home.

She told him she couldn’t remember anything about herself except her own name; Deirdre Havens. And that she was a vampire. She didn’t know how she got here, who or where her clan was, or if she even had a clan. Despite being warned about vampires, Talon felt sorry for her and took her home with him. Lucian nearly killed her on the spot and things haven’t gotten any better since.

Lucian’s convinced she’s lying about her memory loss; that she’s a spy for the vampires sent to infiltrate Moonwood Mill and wipe out the werewolves. Talon insists that’s ridiculous; if she was a spy, why would she outright say she was a vampire to a werewolf of all people unless she really couldn’t remember why they hated each other?

Lucian refused to let Deirdre stay in the trailer so Talon created a makeshift lean-to for her in the yard behind the trailer. Worried about her safety in a town full of werewolves, Talon started staying out there with her almost all the time and the more Lucian tried to keep them apart, the closer Talon and Deirdre became until they fell hopelessly and completely in love with each other. All Talon and Deirdre want to do is run away somewhere with no werewolves or vampires where they can just enjoy the great outdoors and raise a family together in peace someday… but Talon just can’t bring himself to break the bond of family and leave his brother.

Will Talon ever be able to convince Lucian to give Deirdre a chance or will he have to give up one to keep the other in his life? And if Deirdre does ever get her memory back… will it change anything about how they feel about each other?

Hey, people gotta dump all their junk somewhere, right? Might as well dump it in that overgrown yard. It’s not like anyone actually lives in that dumpster of a trailer… right? Right?! Whoah, what was that?! RUN!

Your Story Starter Kit is waiting for you! Get The Household and The Lot by downloading them from the official Gallery Website linked on the buttons below. Or, follow SnarkyWitch in the Gallery and look for A Forbidden Lunar Love and Junkyard Living!

The Household
The Lot