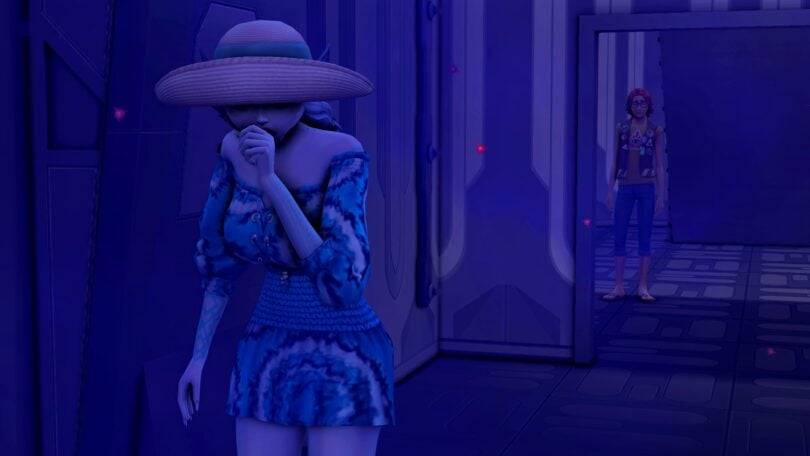 Want to make StrangerVille even scarier? Play it with an alien.

There I was, just minding my business playing with my favourite alien Sim in StrangerVille. I didn’t think anything of it. I just thought it would be fun to play an alien in StrangerVille. Aliens and StrangerVille go together like cowplants and cake. Little did I know that I was about to see horrors the likes of which have never been seen before.

Unsuspecting and naïve, I sent my Sim to the lab to explore after getting her a keycard. Everything was business as usual up to this point but that all changed when she went downstairs and attempted to walk through the purple spores in the hallway that leads to the second door.

That’s when she ceased to be a cute little alien from Sixam and transformed into a demon from only my wildest nightmares. Those black, soulless eyes, that crazed grin exposing sharp teeth, the tilt of her head that gives distinct “You’re next!’ vibes.

Did I just step into the film Coraline? Is this the next SAW movie? I don’t know. I don’t want to know. All I want is to get the flippity-heck out of this cursed lab.

Wait… where was the exit again? Are those… vines? Oh no… she’s coming for me…

RIP SnarkyWitch, who mysteriously disappeared inside the secret lab along with her alien companion. We may never know what happened to them…