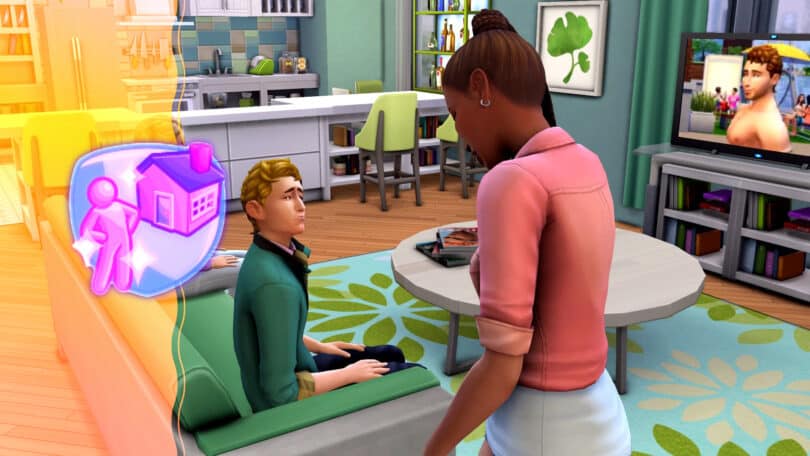 The new Scenarios have better incentives. All about them in our latest playthrough!

The latest update for The Sims 4 has added three new permanent scenarios to the game; Stuck in Their Shadow, New in Town, and Parenting Predicaments.

Here’s how our playthrough of the New In Town scenario went!

This scenario is a bit different from previous scenarios we’ve had! This scenario leaves more room to play your own way, offering optional goals to go down different paths. The choices you make determine what your bonus reward will be. You can now also see the potential rewards when you start the scenario. Oh, and you’ll be playing with a premade household for this scenario; a single Sim named Farrah Nouvel.

The description states that Farrah just moved to town and doesn’t know anyone, yet. Help her explore her new neighbourhood, make friends, and throw a housewarming party.

The goals for this scenario are more intricate than previous scenarios. There are different stages of the scenario and in each stage, your choices will affect how future stages play out so we can’t give a full breakdown of every goal like we usually do. However, we can break down the potential endings and rewards.

I moved Farrah to Willow Creek because it’s a good starter town. The first stage of this scenario was focused on exploring. She had to meet 5 Sims and socialize 10 times to progress but she also had optional goals to buy new things for her home and get to know people.

Farrah hit it off well with Makoa and visited the park to complete these tasks. I did also buy the optional objects.

Travel to a Venue

Now Farrah got to choose between traveling to a bar or a gym. She had the optional goal to take someone with her so she went to the gym with Makoa. She could have just gone straight home to progress but I decided to do some of the optional goals here.

This stage had a lot of goals. Farrah had to visit someone’s house, invite a Sim over, and have 3 friends. She also had optional goals to reach level 2 in Charisma, Comedy, Mischief, and to buy the Observant reward trait. I did all the optional goals here.

Farrah visited the BFF house and while there, got a call asking her if she wanted to hang out with friends or go on a date. I’m a sucker for romance so I chose the date option. Farrah tried to flirt it up with Travis but struck out hard. Good thing she was already friendly with Makoa!

After freshening up, they went to the Blue Velvet and had a great time.

Prepare for the Party

Now that Farrah knew some Sims, it was time to throw that housewarming party! The only goal here was to throw a house or dinner party but I also bought a stereo, bar, and cooked a group meal as optional goals.

The party was a smashing success!

Throwing the party completed this scenario! Farrah got the Love at First Sight ending. As a reward, she got the Inspired Explorer trait, plus the Great Kisser trait as her bonus reward and some satisfaction points! Not bad, I’ll take traits and satisfaction points!

This scenario was super fun and cute with lots of optional goals leading down different paths. I loved it! Even though the scenario is designed to teach new players some of the game mechanics, I was not bored at all as a veteran player. I was super invested in the whole story unfolding. The rewards are MUCH better than in past scenarios, too.