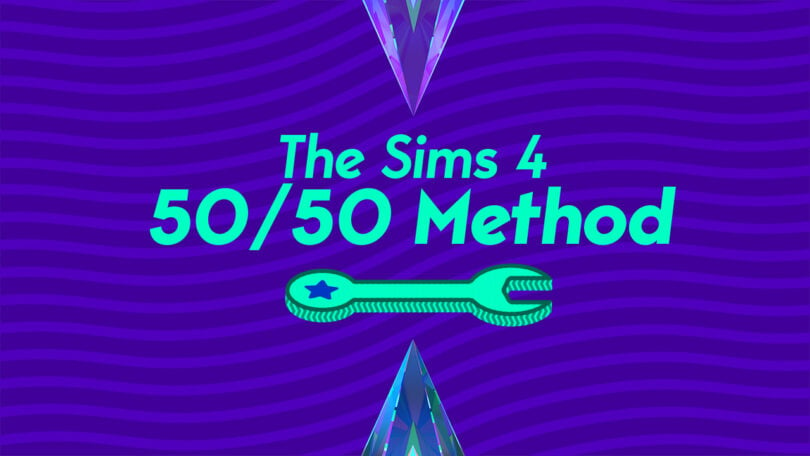 Make the 50/50 method simpler, faster, and not Painful.

It is one of the most dreaded terms in the Sims community: 50/50. But, do you know how to 50/50 your folder? Or if you do, do you know how to do it effectively? 50/50 is not as difficult as most people think it will be. There are tips to make it simpler and faster!

Divide your folder into sections so that you can remove them if you believe they have nothing to do with the problem. For example, CAS and BuildBuy folders are nice to have and separate.

For script mods and any mods that have more than one file, keep all files together in one folder so they don’t get separated when you 50/50. Make sure they are not too deep. Script mods can only be one folder deep and package files can only be 5 folders deep. If the instructions tell you to install something a specific way, ALWAYS install them that way.

Keep your tuning mods separate from your script mods.

Know which of your mods are UI mods in case you have UI problems in your game. Then, you can start by doing a 50/50 on just those mods.

Remove any folders that possibly aren’t causing it (you can 50/50 those folders later if the problem ends up not being part of the remainder of your folder.) These typically are CAS and BuildBuy. ONLY do this if you are certain that these items are not part of it.

Note: Make sure to delete your cache every time you delete and add mods. Depending on the error, you might need to start a new game every time you load your game. Otherwise, the bug might still be active in the save and you won’t be able to tell if it was removed.

Below is a flow chart from The Sims Wiki that explains the process. (Hint, it is not necessary to put the folder containing the suspect files in your Downloads folder. You can also put it, for example, on your desktop.)

What to Do If It’s Not Working?

If the method not working, one of the main reasons could be a mod conflict. Read the information provided by each Modder. Often, Modders will provide a list of mod conflicts for their mods in the information on their website, Tumblr, or Patreon. If not, try to get as few as possible mods while the bug is still happening and then remove mods one by one.

This only needs to be done if the method is not working otherwise.

Another possibility is that the error that you are receiving could not be triggered every time you open the game. This makes the 50/50 method very difficult. If this is the case, I would highly recommend going over all the literature provided with your mods, making sure you have only one of each mod installed and that it is the most recent version, and that you have any Last Exceptions looked at by someone that can read them.

Need to Know What Mods Broke?

Check our Discord Server! We have a channel with the Deaderpool Mod News feed that will let you know about most of the mods that have broken recently. Join Here!

Do You Use the 50/50 Method and Has It Been Helpful to Solve Your Mod Bugs?