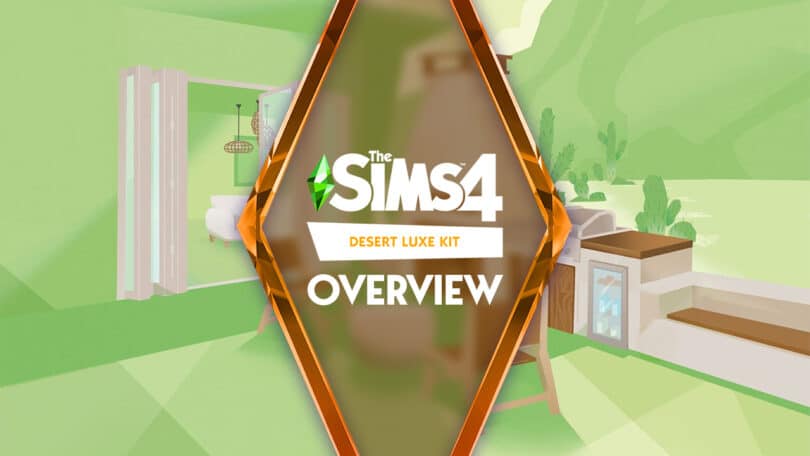 Everything included in The Sims 4 Desert Luxe Kit! Yup – all the color variants included.

The Sims 4 Desert Luxe Kit just dropped today and, in a surprising move by The Sims Team, it is completely FREE until October 17th. Coincidentally, this is the day before The Sims 4 base game becomes a permanent free to play title, so the free kit is kind of like a gift to players who purchased a copy of the base game before it became free.

The Desert Luxe Kit comes with a total of 28 build/buy items to furnish a desert-themed patio. As one might imagine, this patio kit comes with a new BBQ, a bar, an awning, an outdoor fireplace, and outdoor seating; however, the fireplace and seating wouldn’t look terribly out of place indoors, either.

Most of the items in the kit have 9 swatches but a few items have up to 12 swatches. Every single swatch is some shade of brown or beige with some rare exceptions for black, white, and the occasional faded earth tone.

Here’s everything included in the kit!

Below are the catalogue entries for each item in the kit. Closeups of all swatches for every item will be included in the next section.

Below are closeup pictures of every item that comes with the kit in every swatch. The curtains and ceiling lights both come in all three wall heights. The windows and door are all designed to fit the short wall height.

Well, let’s just say it’s a good thing the kit is currently free because if it wasn’t, we would absolutely not recommend it unless you just have an undying love for beige, beige, and more beige. Yes, we’re aware it’s a desert kit but anyone who’s actually seen the desert knows that it is quite lush and vibrant in many areas, as both Oasis Springs and StrangerVille display in their landscapes.

Apart from the lack of variety in the swatches, there isn’t a lot here that we don’t already have in some form or another. The kit comes with no decorative clutter whatsoever (which is odd, given that the kit comes with a shelf that can only fit small decorative clutter) and despite the kit description talking about “functional architectural elements,” there’s only one piece of architectural décor in the whole kit; the awning. It is a very nice awning, admittedly, but a few benches that stick together seamlessly and an awning doesn’t exactly qualify as architecture as far as we’re concerned.

However, the BBQ does look pretty nice and the floor lights look a lot less bulky and ugly than the base game ones so we can definitely see those as selling points for the kit.

In all honesty, this is very much a “take it or leave it” kit. It’s by no means the worst kit that’s been released so far but there’s nothing particularly spectacular about it, either. It’s not a must have kit for every Simmer’s collection but if you are a builder who is absolutely, completely, hopelessly in love with this sandy, minimalist aesthetic, then you might consider it a must-have for yourself.

But again, it’s FREE right now and will be until October 17th. With that in mind, we think it would be rather silly not to claim the kit for free while you are able to do so. It’s not an amazing kit but it’s not a completely awful kit, either, and it won’t cost you a single penny to download. Why wouldn’t you want new stuff in your game for free, right?