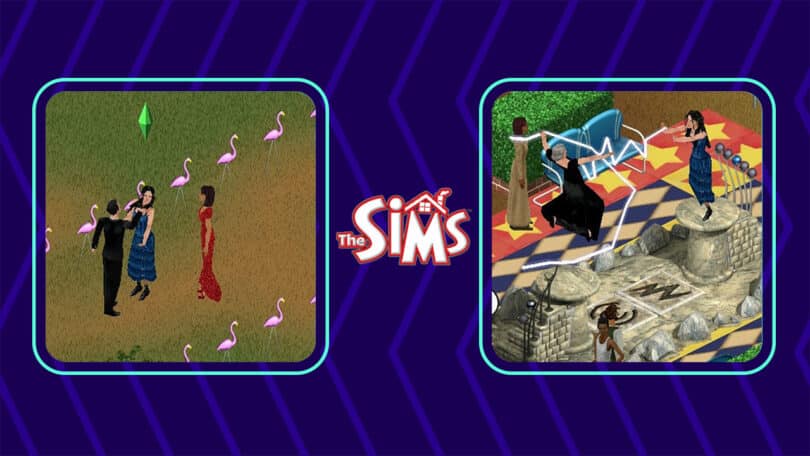 Several hours of delightful insanity were experienced today and I have no regrets.

For whatever unexplainable reason, I woke up today yearning to experience The Sims 1 all over again. Granted, this isn’t a super uncommon desire for me; I have The Sims Complete Collection installed with heaps of CC and mods and revisit it semi-regularly, but it’s been a hot minute since I’ve delved back into it.

Usually, I have a goal in mind but today, I really wanted to just make a Sim, plop ’em down wherever, and see where fate decided to take me. Naturally, I documented everything to share with you.

This is how that playthrough went.

Oh, Sims 1 Create-A-Sim… There’s something so charming about your total lack of well, anything, really. But the personality point system was pretty sweet, not gonna lie.

And oh, look! I see all my broken CC is still here to haunt my nightmares after all this time. Hello, headless body.

I slapped a head on my Sim that I’m pretty sure is custom content and a body that I know for a fact is from Makin’ Magic, put together a less-than-stellar but highly accurate personality for myself and off I went! To Old Town! Because none of the towns had actual names back then. Also, Old Town was the only home town you could start in, even though you can eventually live in Magic Town if you scrape up enough MagiCoins.

I moved Sim Snarky into the same house I always move into because it’s the cheapest house which leaves you with the most funds to spend on expensive things right away. Any OG Simmer knows that having good quality stuff is way more important in this game than in later Sims titles because your motives deplete super fast and good quality objects are the only way to make that bearable.

I splurged big time on the bed, the kitchen appliances, and went a bit upscale on the living room chair as well so they would not only increase motives fast but also the room score, which will save me money on decorating. I also deleted all of the plants on the lot apart from trees because plants actually need to be watered and I am not about that life, no thank you.

Oh and let’s not forget the flamingo army in the front yard because it’s cheap outdoor décor, which is important for going to work in a good mood and getting promoted. See? I’m a total pro at this game.

With the house looking completely ridiculous but otherwise all set up for Snarky’s success, it was time to get a job and meet some Sims!

OMW to Steal Your Girl

The only job in the paper is for the military career track which is both the worst and best career ever for Snarky. It’s the worst because it requires getting up early and exercising, but it’s the best because it pays the most and doesn’t require very many friends to get promoted. Sure, we’ll take that.

I was bummed that my flamingo empire did very little to boost the outdoor room score until Mystery Man showed up with his mystery box. Snarky opened it up and got herself a magic for beginners kit which for some reason boosted the room score outside immensely??? Well, okay, I guess all that stuff is staying out in the yard for all the neighbours to gawk at.

Oh look! Here come the Goths! In strangely fancy clothes which I’m sure I put them in at some point in the distant past. Let’s see if my winning personality will be enough to befriend them.

Welp. Turns out giving compliments counts as flirting in this game so I apparently flirted with Bella in front of Mortimer, which made him slap me and then Bella consoled him while I cried. Off to a great start. Really knocked that out of the park.

For some reason, all was easily forgiven as soon as I started talking to them about magic. I’m pretty sure I also made them both witches at some point so that tracks. Unfortunately, magic was all they’d talk to me about. They hated everything else I tried to do with them and eventually, my unbearable presence drove Mortimer to madness. I mean, why else would he randomly start talking to his wife through a sock puppet?

Back to the Grind

After miraculously being able to somewhat salvage my relationship with the Goths due to our shared interest in magic, it was time to prepare for for work and get some skills out of the way. My experience with this game has taught me never to touch a stove without at least level 2 Cooking skill or you will burn down your house. Goal #1 sorted.

Goal #2 was just to go to work in a good mood because Snarky didn’t actually need any skills, yet. So far, so good. She’s got awesome objects to ensure awesome motives… ONLY TO HAVE A FREAKING RACCOON RUMMAGE THROUGH HER TRASH IN THE NIGHT AND LEAVE GARBAGE EVERYWHERE, TANKING HER ROOM SCORE AS SHE LEFT FOR WORK AAAAAAAARRRRRRGGGHHHHH!!!

But shockingly, she still got promoted anyway? You know what? I won’t complain.

After purchasing an exercise machine to build her Body skill for work, Snarky was left with exactly 666 simoleons, which I’m starting to feel is an omen because I discovered Snarky’s favourite TV channel is horror.

Another promotion in the bag and this time, we need to work on Mechanical and Charisma. Gotta love The Sims for being the only game out there where you can improve your people skills by talking to yourself in a mirror.

Snarky did not get promoted to level 4 like I wanted after her next shift, which I was mad about until I realised she was still one Charisma point short. Okay, that one’s on me, I guess. Fair enough. She did, however, make almost 1,000 simoleons just for answering the phone so that was cool.

With a few promotions under her belt and some money in her wallet, it was time for Snarky to explore and see the world. Except not actually because vacations are hella expensive and time consuming, but that mysterious hole in her yard must lead somewhere, right? GERONIMO!

So we are now in Magic Town at the most terrifying carnival I’ve ever seen in my life. I’m not sure if we’re about to have the time of our lives or get murdered by a deranged clown in some kind of twisted funhouse but either way, sounds eventful. Let’s go!

After getting a strangely profound and useful fortune at the fortune telling booth, Snarky could not run fast enough to the carnival rides. No seriously, I clicked on them and she booked it to that little roller coaster cart faster than I’ve ever seen her run to the carpool for work.

This absolutely insane carnival ride tried to murder her several times but nearly drowning, suffocating inside a clown’s brain full of colourful balls, and being shot out of a cannon was apparently thrilling to Snarky. She had the time of her life. You know what? I don’t know why I’m surprised given the fact that chainsaws and screaming make her laugh with sheer delight.

After surviving that deathtrap, I thought we’d end things here with a big finale. A magic duel against Cornelia Goth! If memory serves me correctly, the magic duels in this game are like a rock, paper, scissors thing where some spells trump other spells and picking a better spell than your opponent is how you win.

I had no idea which spells were the better ones but I kinda guessed using common sense, such as water and lightning? Bad combo. Try a tornado. Somehow, I was very good at that and Snarky completely kicked this poor old lady’s butt in every round.

I’m starting to become a little bit scared of my Sim, if I’m being honest, so I decided maybe it’s best to just save here and leave her to her own maniacal devices where she can’t come through the screen and kill me… I hope…