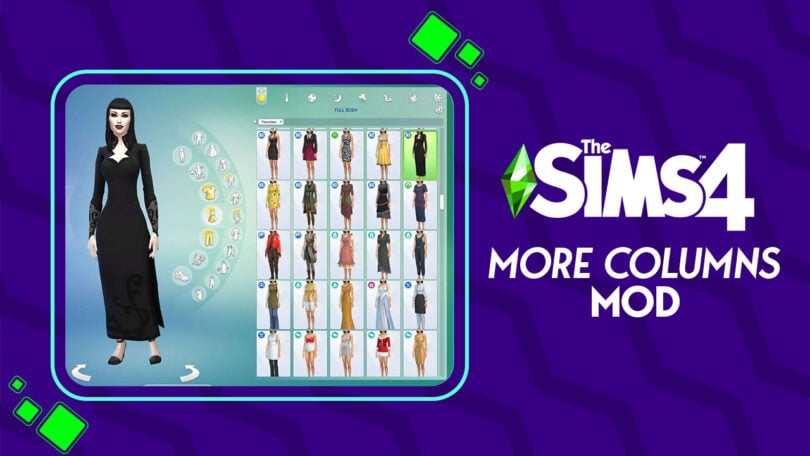 The Sims 4’s More Columns Mod for CAS unlocks faster character creation. Learn how to use it and what your best options are!

The Sims 4 has been out since September 2014. With that many years under its belt, the game has acquired a lot of Create a Sim assets. Add Custom Content (if you use it) and you will be stuck scrolling through the many options using only two columns. There was a need for a Sims 4 CAS mod!

This is where Weerbesu comes in…

The Sims 4 More Columns in CAS is a Mod that extends the columns in the game from 2 columns to either 3, 4, or 5 Columns. This gives the Simmer more room to see their clothing options at one time.

If your computer’s resolution is too low, it might not have enough room to show all of the columns in the Sims 4 CAS mod. The following are the recommended number of columns for each resolution.

*Note: With Cats & Dogs installed, for Sims 4 CAS mod columns to be shown in Create a Pet, it will be necessary to have an even higher resolution for all column versions.

After the 1. 58.63 game update, the option to adjust the UI Scale was added to the game. This option allows more columns to be used on smaller resolutions. But note, that all your UI will adjust, not just the columns. It is possible to change the UI without a restart so the option to change it when in CAS then adjust it larger during gameplay is available.

If there are any type of problems with how the UI (User Interface) appears after a game update, make sure to try removing More Columns in CAS to see if it fixes it. The Sims 4 CAS mod often breaks after updates.

Give your clothing some breathing room, install More Columns In CAS by Weerbesu!

Credit goes to SnarkyWitch for creating the Sims used. They are available on her The Sims 4 Gallery page! They’re a recreation of The Addams Family.

Have you ever tried The Sims 4 CAS mod? Or do you use the traditional two columns?