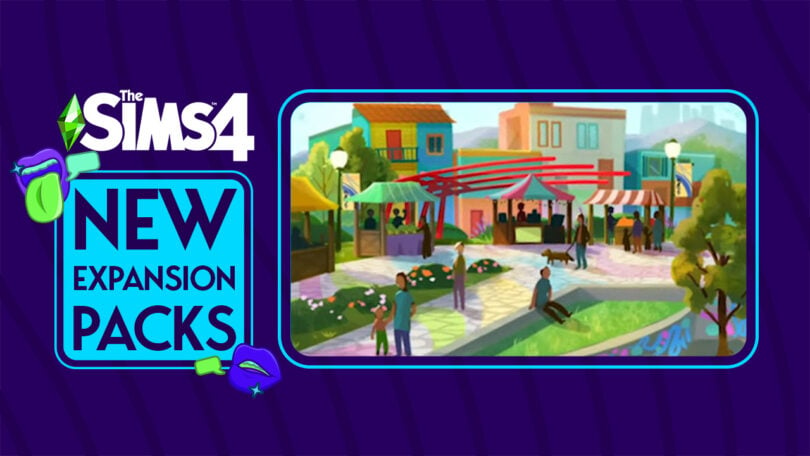 Two new Sims 4 Expansion Packs are coming next year, and we can already guess the new Themes and Features!

You want this, we want this – it’s time to nitpick and overanalyze everything we saw on The Sims Summit! This time, we’ll be taking a close look at the future Sims 4 Expansion Packs.

A lot of things happened in the last few days: The Sims 4 Base game is finally FREE to play and The Sims Summit dropped a couple of huge bombs, such as the long-awaited Babies update, a new life stage in between babies and toddlers, coming in early 2023 AND two new worlds, confirming two new expansions in 2023. Not to forget the Project Rene, aka The Sims 5 that promises cross-platform gameplay, revolutionary creation tools, and a transparent way of building the game.

Since we have the big thing out of the way, what else can we expect for The Sims 4? Let’s dig a little bit and find out!

The following images are official Concept Art for future Sims 4 Expansion Packs. Shown at Behind The Sims Summit!

At first glance, it looks like the two worlds are centered around wholesome family experiences, as almost all Sims 4 worlds are (except for the supernatural ones).

The one on the left has a suburban, almost rustic feel to it. The bright colored facades make me think it could be vaguely inspired by South America. That one could lend it self to a lot of possibilities: Dia de los Muertos festivities, carneval, family gameplay and generational gameplay (I really think it’s time). Possibilities are endless!

The other world has a more urban feel to it, especially with a Golden Gate bridge-looking structure in the back. It would be really useful to get another city world with apartments and new venues, parks, and boardwalks for Sims and their families to explore. And while we’re at it…

Kids will be able to ride bicycles

An incredibly cute illustration of the two new worlds gives us a wholesome depiction of a San Francisco-looking world, with a promenade and an adult with a kid RIDING A BICYCLE!!! It seems that kids will finally be able to do something that kids do in real life. Incredible, right?

Unfortunately, we only got one CAS item preview, but it’s not bad at all! An underwear set inspired by maybe Fenty or Calvin Klein, or their Simlish counterparts, that looks like a million simoleons.

We all know that clutter makes all the difference in realistic or just interesting builds, and boy are we in for a treat! A denture in a glass of water is my personal favorite, because it’s weird and because it might suggest more gameplay for elders. A girl can only hope…

The other two, a messy side table/drawer and a plastic box filled with random letters, VHS, and maybe vinyl records also confirm this theory. At this point, we’ll just have to wait and see if any of these theories are right.

What do you expect from future The Sims 4 Expansion Packs? Let us know in the comments!