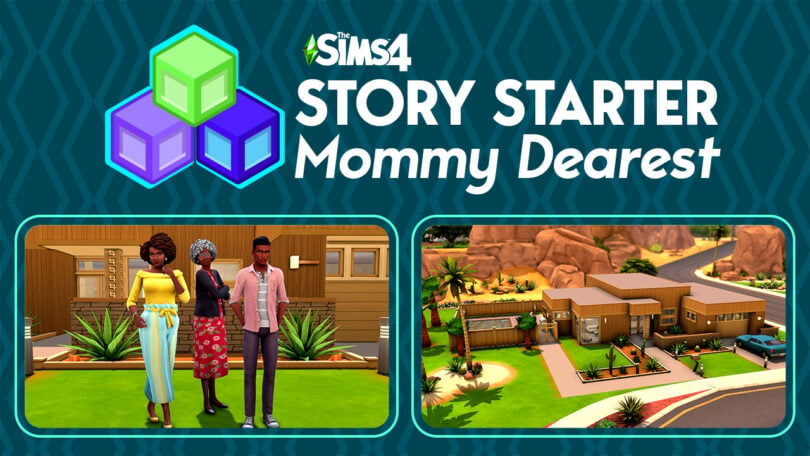 A young couple starting out in life are finding it difficult to deal with a nagging mother-in-law.

Welcome to our eleventh official Sims 4 Story Starter Kit! If you missed all the info on Story Starter Kits, you can read more about what they are and how they work in our introductory article!

This month, we’re bringing you a young couple who are looking forward to starting a family… a few years down the line once they’ve established themselves in their careers but the overbearing mother-in-law thinks she calls the shots in their marriage!

Josephine met a cute young waiter named Darnell at the restaurant across the street from her job in fashion and you can guess the rest. They went on a few dates, fell in love, and two years later, they were saying “I do” at the altar!

Since they were still working their way up in their careers, Darnell’s mother, Dorothy, offered to help them buy their first home with her retirement savings… as long as she got to live with the happy couple! She insisted she wanted to be as close to her future grandchildren as possible in her old age. Josephine and Darnell were hesitant at first; Dorothy had always been known to be a bit overbearing and pushy when it comes to her only son but they could really use the financial help. Buying a home with Dorothy meant they could start their lives in a bigger home than what they could afford by themselves.

So they agreed. How bad could it be, right? Josephine and Darnell purchased a beautiful, newly renovated mid-century home with a pool and a two car garage in a nice suburban neighbourhood of Oasis Springs. It was the perfect place to advance their careers and save up to start a family a few years down the line, but almost as soon as they moved in, they began to regret it. The overbearing, naggy mother-in-law was making them miserable!

Dorothy started demanding to know when Josephine and Darnell were going to start having kids and would not take no for an answer when they tried to explain to her that kids were something they wanted but not right now. They were still getting established in their careers and having kids now would mean less money being saved for those kids’ long-term futures, like college. They wanted to make sure they could support the kids they have, first. They even tried pointing out to her that there was nowhere to put a baby nursery in the house; Dorothy was in the second bedroom and Josephine’s office was in the garage!

When it became clear Josephine and Darnell weren’t going to have a baby just because Mommy Dearest demanded it, Dorothy began to guilt-trip them into having the grandkids she wanted. She’d cry and tell them how she didn’t have much time left and how could her only child be so selfish and deny her the joys of having grandchildren in the final years of her life? His awful wife must be influencing him and turning him against his own mother!

All of Dorothy’s dramatics has made Darnell realise just how toxic his mother is and now neither him or Josephine want anything to do with her… but what can they do? They’re stuck living with her. They bought the house together so they can’t just kick her out. The only two solutions they can think of is to just cut their losses and leave the home they love or as morbid as it sounds, just tolerate Dorothy’s presence until Grim comes for her and hopefully they’ll be ready to have kids by then.

This 1970s mid-century family home has been recently renovated to suit more contemporary tastes. The spacious two car garage and inground fenced-in pool are big selling points for the property, especially considering its location in the middle of the dry, arid desert. Its single story design is perfect for Sims who have trouble getting up and down stairs.

Your Sims 4 Story Starter Kit is waiting for you! Get The Household and The Lot by downloading them from the official Gallery Website linked on the buttons below. Or, follow SnarkyWitch in the Gallery and look for Mommy Dearest and Mid-Century Dreams!

The Household
The Lot