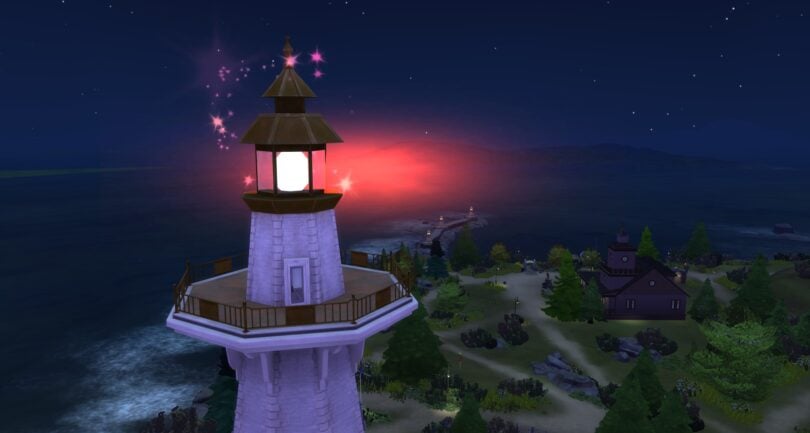 You’ve heard of Father Winter’s Baby, but did you know about the Lighthouse Baby Sims 4 Hidden Trait?

There are a lot of Sims 4 Hidden Traits in the game that people are not aware of or just haven’t encountered during their gameplay. One of these hidden traits is the Lighthouse Baby trait! This trait is given to a baby created from the Lighthouse “Try for Baby” method.

Unfortunately, there is not much included with this trait.

The trait is an hidden trait which means it functions like other traits, but it is not visible in the UI where the Sim’s traits are listed normally. If you are unfamiliar, UI stands for User Interface. It is where you control the game and read information.

The only feature of the trait: A buff from vising the Lighthouse. When visiting, a Sim will get the “Oddly Reminiscent” Buff or Moodlet. This Buff gives your Sim a +2 Happy Emotion.

The Buff, in its description, says the following about the Sim’s “experience” at the Lighthouse.

“There’s something so familiar about this place. It fills this Sim with an inner light. They are positively glowing!”

How to Get the Lighthouse Baby Trait

It is not difficult to create a Sim with this trait, but it does take patience! Follow these steps to make sure your next Sim baby has this trait!

The Sim will have this trait from the baby stage all the way until they meet the Grim Reaper!

How to Cheat this Sims 4 Hidden Trait?

If you do not want to create a Sim through Lighthouse “Try for Baby”, you’ll need to use the traits cheat to add this trait. This also works for any other Sims 4 Hidden Traits as well including Father Winter’s Baby, Ancient Bloodline, and Sulani Mana.

The Lighthouse Baby Trait will be added to the current Sim!

If you ever want to remove the trait, make sure to type traits.remove_trait trait_Hidden_LighthouseConception into the cheats console.

Looking for more Guides and Tutorials on The Sims 4 Cats & Dogs? We have a full catalogue of informative pieces such as “How to create Wild Animals“. Click the button to learn more about the pack!

Can I Check if any Sims 4 Hidden Traits are Present?

Want to know what Sims have the Lighthouse Baby trait? It is simple! First, download TwistedMexi’s AllCheats.

There will be a list of traits in the cheats console.

For more inherited traits, check out this article: Secret Inherited Traits in The Sims 4 and How to Get Them

Did you know about this Lighthouse “Try for Baby” trait?