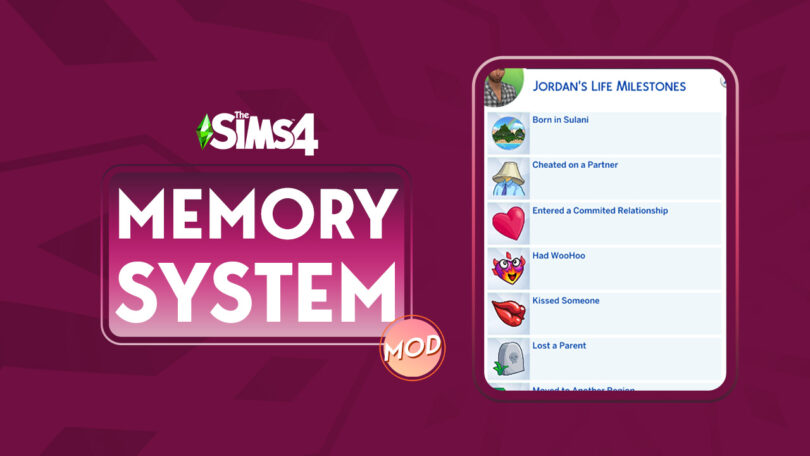 Lumpinou’s mods strike again! This time, by adding memories to The Sims 4!

Once again, a modder has taken it upon themselves to add missing features to The Sims 4. Lumpinou is a well-known modder best known for their popular WooHoo Wellness mod but that is certainly not all they do! Their latest project is adding a memory system to The Sims 4! The Memory Panel mod is designed to make special moments in your Sims’ lives matter more, complete with moodlets!

Lumpinou explains on their blog that with this mod installed, Sims will automatically retain memories for important moments in their lives as they happen. You’ll know when your Sim has acquired a new memory by a special effect that appears on your Sim, as well as a moodlet.

You can then open your Sim’s memory profile to see all their memories. Some memories related to relationships may be clickable to show the Sim with which your Sim experienced that memory with. The mod is smart enough to make distinctions between a first-time memory and a repeated memory. Your Sims may not feel the same way about a certain event the second time around. For example, Sims may have different reactions to giving birth the first time versus a second or third time. They may also feel differently about getting fired multiple times or being cheated on multiple times.

Lumpinou has also added some extra features to The Sims 4 memory system mod, such as being able to ask Sims about their memories and multiple cheat options to add/remove memories. Sims will also gain a special relationship bit with the Sim they have their first WooHoo with. What’s even better? Upon first installing the mod, it will retroactively add memories to all your current Sims!

Currently, there are over 60 different types of memories Sims can acquire. Some memories are designed to work with other mods of Lumpinou’s.

Acquired a Business
Adopted a Pet
Became a Widow(er)
Became an Occult
Became President
Became a Vampire
Became a Spellcaster
Became a Werewolf
Befriended a Dolphin
Befriended a Talking Toilet
Made a Best Friend
Carried a Baby for Another
Licensed a Song
Gave Birth
Got Kicked Out by Parents
Joined a Religion
Lost Custody of Children
Won Custody of Children
Published a Video Game
Mastered a Musical Instrument
Went Scuba Diving
Summited a Mountain
Turned a Sim into a Vampire
Reached the Top of a Career
Won a Gaming Competition
Won a Starlight Accolade
Lost a Best Friend (ie, they died)
Born in [insert world] Came Out
Cheated on a Partner
Child Taken by Social Services
Cured of Vampirism
Death of Child
Death of Parent
Death of Pet
Death of Sibling
Degree in [degree] Dropped out of High School
Dropped Out of University
Found a Fated Mate
Gave birth to an Alien Baby
Got a Job
Got Fired
Had a Committed Relationship
Had a Fight
Had a Permanent Separation
Had a Wedding Ceremony
Had an Abortion
Had Children
Had Grandchildren
Had great Reputation
Had terrible reputation
Hero of Strangerville
Kissed someone
Moved to another “world”
Parents Separated
Published a book
Saw a strange creature in space
Sold a masterpiece
Took gender-affirming steps
Took Vacation to Another World
Visited Sylvan Glade / Forgotten Grotto / Deep Woods
Was abducted by aliens
Was cheated on
Was Spared by the Reaper / Nearly Died
Was World Famous
Won the Lottery
WooHoo’d in Space
Woohoo’d with someone

What’s next for the mod?

Lumpinou says they plan to add new features to the mod over time, like more memories, larger impacts for memories, more social interactions, and even Social Bunny posts! They also say that the mod can be integrated with other mods.

As for making memories chronological, Lumpinou says it’s something they would like to do and are actively working on but this is a tricky endeavour and may not be possible, so they can’t guarantee this will happen as of right now.

Currently, The Memory System Mod is in early access for Lumpinou’s patrons but will be made freely available to everyone on December 1st, 2022. You can visit Lumpinou’s patreon if you are interested in becoming a patron and receiving early access to this mod.

If you like this mod, we recommend checking out Lumpinou’s Complex Marriage Outcomes module!