I wanted to talk to you about organizing your Sims 4 folders.  I’m one of those people who likes everything nice and tidy, including my Sims 4 folders.  So, I wanted to show you how I organize my folder.  This will be done in multiple articles with the first one covering the mods folder.

Before beginning the tidying up process, copy and paste your entire Sims 4 folder somewhere safe. My suggestion is a thumb drive dedicated strictly for Sims.  Get the largest you can afford.  A quick search of Amazon shows that a 128gig flash drive can be purchased for under $35 USD.  Try to get an even bigger one, if you can. You should already be doing this on a regular basis of your important folders. These include your saves, tray, screenshots, and mods folders.  Backing up ensures that you will not have a catastrophic loss of your important Sim documents later.

Now that you’ve ensured that your files are protected, you can begin the process of cleaning things up starting with that mods folder.

I suggest you read the excellent blog post by LindseyXSims where she explains how to remove those pesky extra characters in package names that could slow your computer down.  The process may seem daunting; however, after a few times doing this it will become second nature. It’s that easy.

A quick little side note:  It is important to organize your mods folder because if you are like me, you have over a thousand packages.  If you are like many of my Simming friends, you have thousands of packages.  Now imagine if there is a repeat of the “Day the Mods and Custom Content All Broke”.  Remember that day?  Remember the nightmare it was to figure out what broke?  By having your mods folder organized, it facilitates the trouble shooting process.  Instead of hunting and pecking and hoping you found it?  You simply remove a few folders at a time, testing your game, till you no longer have their error.  It’s that simple.

Now that we know why we want that mods folder organized (it also helps when there are updates to find the package), let’s start organizing.

The first thing you are going to do is launch your game so a brand new resource.cfg file is generated.  Once you have done that; go ahead and exit your game.   Let’s go take a look at that file so you know what it is and what it does.  I would suggest downloading notepad++ because it will allow you to save it as .cfg.  You can certainly use notepad but you will need to remember to change the file extension when you are done.  Open the resource file and it should look like the below (except for the overrides section):

The overrides is for any mods you might want to install that function as game overrides.  An example would be the one that removes the bathing suit Sims wear while taking a mud bath.  That mod goes inside a folder called “overrides” in your mods folder.  You have to direct the game to that folder and you do that by putting in the above into your resource.cfg file.  That file should only have those words in it.  Nothing else.  Now comes the tricky part if you are not using notepad ++ because not saving it properly changes the extension to .txt and then it no longer works.  Select “saveas” and instead of save.  In the drop down menu, select the second option (all files) and then scroll to your old resource.cfg file and overwrite it.

Now you are able to go five sub-folders deep in your mods folder.  I suggest that you keep all your mods on the top level and only use the sub-folders for your custom content.  Many mods (especially those that are zipped) need to be on the top level.  How you organize at this point is really up to you but I will show you how mine looks to give you an idea.  I like to organize my folder by what it is and then the creator.  So for example my path to a shoes by Madlen would look like this:  C:Users****DocumentsElectronic ArtsThe Sims 4ModsCustom ContentClothingMadlen

Here are some graphics for those who prefer a visual. (click to enlarge) 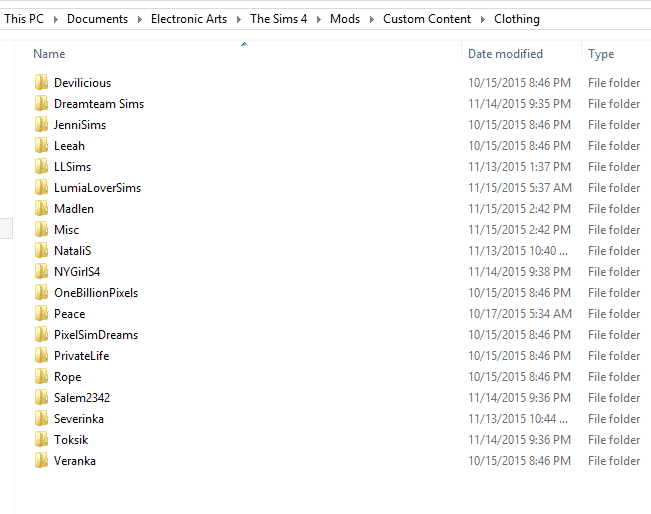 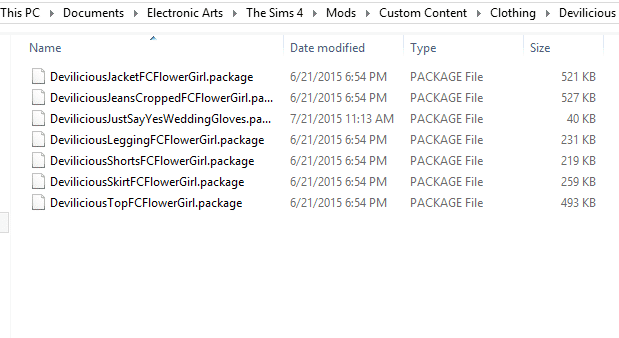 The final step is putting all your stuff back in.  This can seem daunting so I suggest grouping things together by creators first.  Then you can drop stuff into their appropriate folders from there.  What I did when I first organized was go to the creator sites and download new versions.

And that’s it!  Your mods folder is now nice and tidy and ready for more goodies.  Feel free to contact me at The Sims Community if you have any questions.  Next time I’ll show you guys how I organize my saves and tray folders.