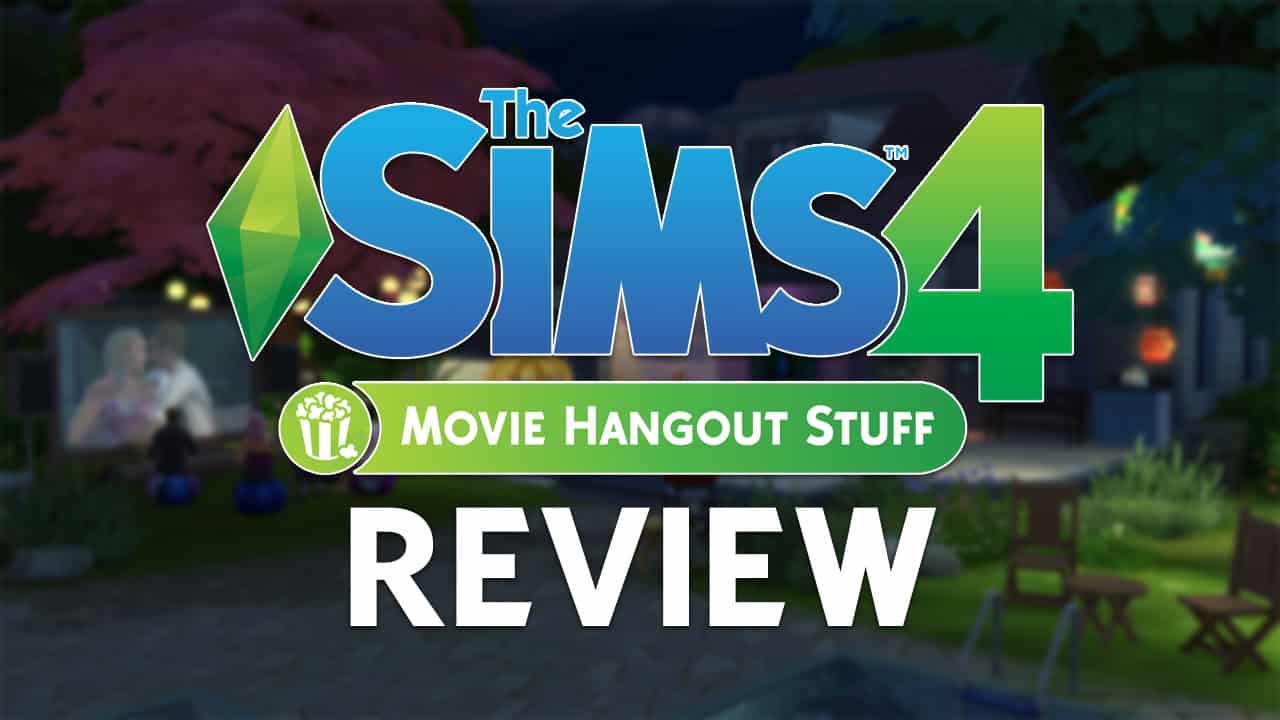 The Sims 4 Movie Hangout Stuff is the latest stuff pack in a seemingly long line of purchasable content for The Sims 4. The creators at The Sims Studio are working hard to bring us new game-changing content almost every month! In this article I will be reviewing Movie Hangout Stuff, showcasing its strong points and some less impressive aspects too. So without further ado let’s start with the Create A Sim additions!

One great aspect of this stuff pack is the addition of some new ethnic hairstyles! Two to be exact. They are the same style except one comes with natural hair colours and the other incorporates some unnatural highlights. To the right is one example of the many colour combinations we are given. I feel this is a definite strong point to the pack as we were very much in need of some more diverse hair textures and styles in the game. Id also like to point out the Boho-Chic or ‘Hippie’ vibe that comes from the items in this pack. Although very different and something we dont already have which is nice. When I heard the title “Movie Hangout”, laid back hippie didn’t really cross my mind? Its a very misleading title however the clothing is very stylish, here are my personal favorites:

The female clothing options are very revealing, while you could argue its kind of ‘hippiesque’ as they are (without stereotyping) quite free spirited and probably likely to wear what feels natural. To some it might come across quite inappropriate to have so much skin showing, but it has to be said that despite this the clothes still don’t give off a cheap tacky vibe. The detailing and patterns really make them quite unique and elegant in some respects. Perfect for your artsy sims! The male clothing is definitely a step up from other packs previous to Movie Hangout. The slouchy trousers are my favourite, they make perfect PJ’s and athletic wear as well as general every day wear, with a very Native American pattern which I quite like! The tops also are a great addition to the game, although we did get a baggy kimono which id of loved for my female sims (maybe even those pants too!) The boots we got for men annoyed me slightly as we didn’t get a black version despite all the clothing having a black swatch? Its quite frustrating trying to construct an outfit with black as the main colour and having the perfect boots.. which don’t come in black? or even grey! Nope they are all brown *sigh* Last but not least we cannot forget those rounded shades, how great are those! They are so universal across different styles too which is always a bonus with such a distinct pack like this.

Now for my biggest complaint about this entire stuff pack. This is just not acceptable in my opinion. Believe it or not, the two images on the left are base game and the two on the right are Movie Hangout.. Really EA? Re-colours? Is that it!? I had a suspicion when reviewing this stuff pack during a video that these were the same mesh for the tops AND the bottoms, and after looking closely my suspicions were in fact, correct! The new clothing for children in this pack are nothing more than new colours and patterns for the same old clothing we had before. Of course they appear as separate items but they are no different apart from the colouring. The children get no new hairstyles at all, no funky hat or glasses. This is just pure laziness and it is by far my biggest complaint for this entire stuff pack.

Right moving swiftly on to build and buy mode options! This is probably my favourite part of the pack as a whole. The items are so vibrant, vintage and just different! It adds something really unique to your library of items to use, you can really get creative with this stuff.

I’ve had so much fun designing rooms with this stuff pack so far, the BoHo Chic style runs very strongly through the 36 new items we received. Despite the somewhat overwhelming bright colours and patterns, the sims team did well to include some slightly toned down options two. In the images above you can see just a few cool ideas for furnishing, such as the combination of the curtains with the wall hanging decor. When placed together like this it almost resembles a shrine or some sort. Coupled with a few candles and some music it would make a great place for some meditating or yoga with your sims!

The huge cinema screens also make for an amazing outdoor movie hangout area. The new tree with the hanging lanterns and those adorable beanie cushions really help to create a relaxed, chilled out environment.

Overall I am very pleased with the build/buy mode additions to the game with this pack. They add so many more options to my game for building and decorating. I also have to say, although the kids drew the short straw in the Create A Sim department. These items put together make a great teen/kids bedroom!

Popcorn! This is one of the biggest new game play options available with Movie Hangout. They match with the ice cream makers nicely using the a similar design and the same colour swatches so you can match up your kitchen nicely. The only strange thing I noticed with this though is perhaps the gargantuan sized popcorn? the individual pieces are a tad on the large size, however it is nice that they don’t eat it with a knife and fork. 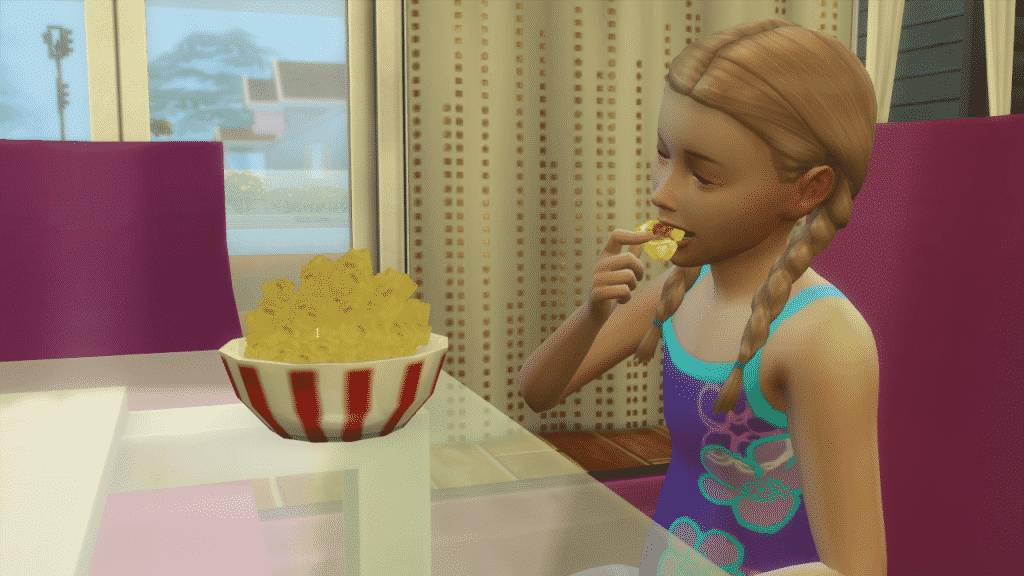 Here’s what they look like! Your sims can make 3 different flavoured versions, 2 of which require some cooking skill. The food is shared out much like the ice cream, one sim makes a batch that will serve a number of sims before eventually running out. Unfortunately the popcorn cannot be preserved in the fridge as it is contained within the popcorn maker itself. Lastly, while watching movies your sims can partake in interactions involving the popcorn such as sending it flying across the room during a jump scare. Oopsie! 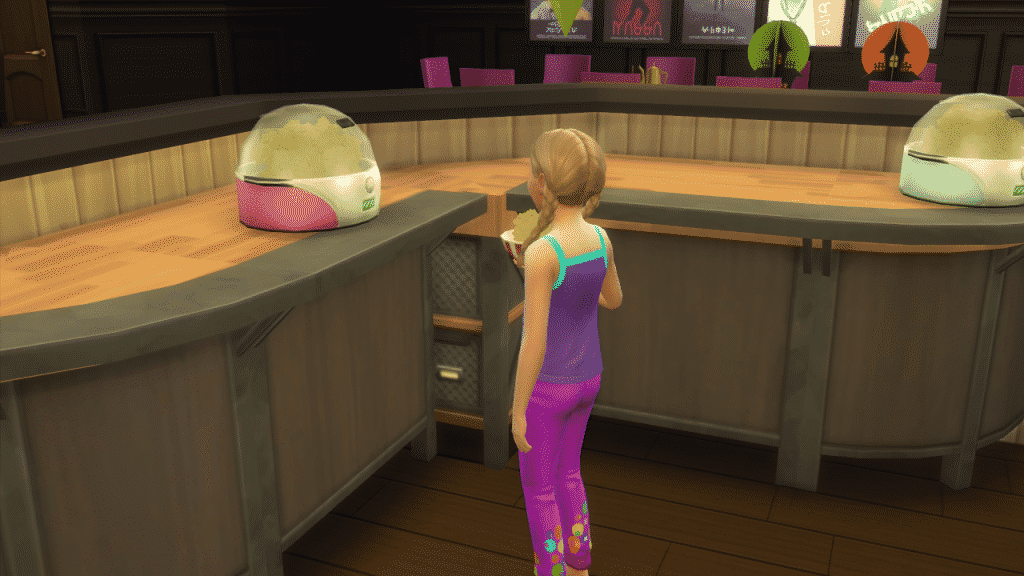 The last game play feature is movies! Here at the sims community we recently featured an article that showcases some of the moodlets sims can have after experiencing particular movies. I really like how they continued The Sims 3 theme into the movies, and by no means are they limited to the big screens we received in the pack! Even without buying this stuff pack your sims can watch films on their everyday televisions too! There are 10 films in total which feature various different genres which your sims can actually pick from and declare their favourite! (How cool is that!) Depending on the film and its genre your sims emotions can change accordingly. They may cry at sad scenes or jump in fear at scary scenes and afterwards they will have some social interactions available so they can discuss the movie they’ve just watched. Your slightly mischievous sims could even reveal spoilers to those who haven’t watched yet! Mwaahahaa! 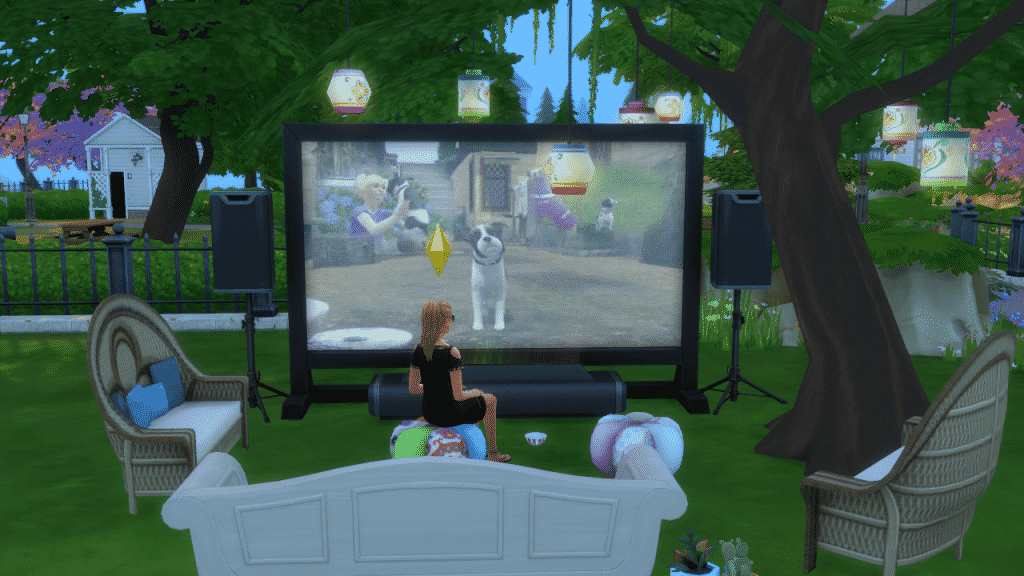 This is a fantastic addition to The Sims 4 franchise and I would definitely recommend it! The final verdict came purely down to the fantastic build mode additions and the male clothing is such a massive improvement to prior packs. For a higher score I would expect the children’s clothing not to be so lazily put together and perhaps maybe a few more popcorn flavours? Apart from that, Movie Hangout offers such a unique change to your game play, stories, sims and their personalities and it has got to be one of the best packs yet!

If you would like to purchase this pack it is available on Origin for download and other retailers such as Amazon and Game.

You can join the discussion about this Stuff Pack on Sims Community Social.