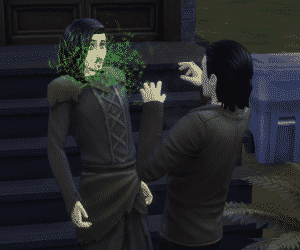 Unlike previous generations, Vampires in the Sims 4 can level up their supernatural status all the way up to being a Grand Master Vampire. This seems to have impressed those of you who enjoy your story-driven gameplay, but for those of you who love the Sims 4 Challenges it’s a chance for you to really get stuck in to some immersive gaming that forces you to invest some time in developing your Sims that little bit more.

But you might be thinking; “How the hell do I level up a Vampire Sim? And what is Vampire XP?”. Well, read on for some top tips and some time-saving tricks that will take your Sims from a Nocturnal Newbie to a Day-walking Demi-God!

What is Vampire XP and how do I earn it? 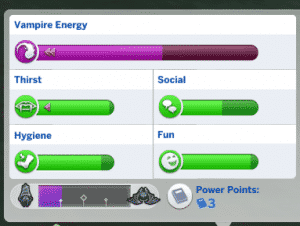 Simply put, they are experience points that you earn by feeding on other Sims and by performing certain Vampire specific actions such as Dark Meditation or Researching Vampire Lore on the computer. If your aim is to level up your Vampire quickly, then you should focus on building relationships with other Vampires, performing Vampire actions and keeping on top of your Vampire’s needs. Feed them regularly, ask higher rank Vampire Sims for training and read about Vampire lore and secrets as if it was their hobby.

XP stacks up over time, and eventually will mean that your Sim will ‘level up’. Levelling up as a Vampire Sim will give you Power Points that can use to purchase Vampire abilities, which in turn can make gameplay more varied and interesting, will help you gain even more XP, and will give your Vampire a higher “rank” within the Vampire World. Your XP Bar is situated at the bottom of your Vampire Sim’s needs console, and will fill up with a pink/purple bar as you earn XP. You will also see a small, purple bat with a + sign appear above your Sim’s head every time they earn XP.

What are Power Points? 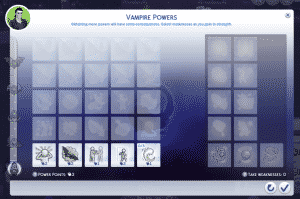 Power Points are awarded to you when your Vampire Sim levels up and gets a new rank. When you create a Vampire Sim in CAS, they start as Fledgling Vampire Level 1 in rank and they will automatically have 2 Power Points to spend on some new Vampire Abilities (don’t worry, we’ll talk more about that below!). At certain ranks, you will also have to take a Vampire Weakness when you take on a new ability – so make sure you choose carefully! Power Points available to your Sim is displayed at the bottom of their needs, next to a small book symbol which will take you to a catalog of abilities they are able to purchase. Below is a list of Vampire ranks, and what you gain when you achieve them.

What Abilities can you buy?

When you level up to a new rank, choosing a new ability to purchase with your Power Points can be a difficult decision. It’s made easier by having some of the abilities locked down to certain ranks, but for anyone having a really tough time picking one – here is a guide by rank levels for what you can get!

Bat Form – Whilst you won’t earn any Vampire XP by using this ability, who doesn’t love the idea of flying around as a Bat? It beats walking!

Cast Hallucination – Make Sims talk to themselves as if you’re a Las Vegas Hypnotist. This is more for comedy reasons that for gaining XP.

Eternally Welcome – That age old tradition of a Vampire having to be invited in is dead and gone! This skill allows your Vampire Sims to simply unlock the doors of sleeping Sims, wake them up, compel them and drink their tasty, tasty Plasma.

Occult Student – When you’re starting out as a brand new Vampire, this can be a great ability to buy into as it helps lower the energy cost of using other abilities and therefore improves overall happiness for your Sim. It also means that you can practice your other abilities, and train other Sims in them, at greater efficiency and effectiveness. If you find the Sunlight energy draining too annoying – then definitely pick this up! It doesn’t protect you from the ongoing damage being dealt by the yellow nemesis in the sky, but reduces the speed at which Vampire energy is drained.

Command – You can essentially control a Sim to do certain actions and social interactions with other Sims. So if your Sims has their eye on that special someone, but they’re married, it can be a very handy ability to have at their disposal!

Garlic Immunity – Garlic prevents your Vampire Sim from feeding, which is both inconvenient and can prevent them from gaining XP. This ability cancels that out.

Vampiric Charm – Useful for those romantically inclined Vampires who need a little extra help, any Sims in the close vicinity of your Vampire Sim when they use this will have a romantic moodlet and stars circling their heads for a few hours. They won’t be able to resist your Sim!

Vampire Creation – If you Vampire Sim wants to turn another “normal” Sim, this ability is the only way to do so.

Vampiric Strength – Vampires can duel with other vampires, but they have to be strong in both rank and physique in order to stand a chance at winning! In order to improve their physical strength, you can buy this ability and spend less time on the treadmill whilst still seeing impressive results!

Child Of The Moon – Much like the Occult Student ability, this gives your Sim a sort of ‘buff’ from 6pm – 7am and means that he or she can gain skills faster and consume less Vampire Energy. It also stacks against other ability bonuses so you could be looking at pretty impressive skill gains overnight!

Irresistible Slumber – This allows you to put another Sim to sleep.

Manipulate Life Spirit – This ability can seriously drain Vampire Energy so be careful when you use it! You can remove spirit from another Sim, which means they are more affected by your Vampire Sim’s other abilities. You can also restore a Sim’s life spirit which will give them a confidence boost for 2 days!

Mesmerize – Like the Irresistable Slumber ability, this affects another Sim’s mood and consciousness. It won’t put them to sleep though, they will just be dazed and unable to move for a few hours.

Vampiric Slumber – The effectiveness of this ability differs by rank, but the premise is the same. It restores your Sim’s Vampire Energy faster and more efficiently than sleeping.

Dampened Emotions – A double edged sword! This ability stops your Vampire Sim from being affected by emotional moodlets. Handy when your Sim is prone to embarassment, but not great if your Sim needs a confidence boost or wants to feel flirty!

Deprive Needs – If your Vampire Sim really dislikes another “normal” Sim, they can use this ability to completely drain one of that Sim’s needs and make them be super hungry, pee themselves or stink like an old sewer!

Odorless – For Sims who don’t like soap and water, this ability means your Vampire Sim will never have to shower ever, ever again!

Sun Resistence – The amount of resistence differs by rank, but this is a self-explanatory ability that gives your Sim some ability to walk around unaffected by daylight.

Beyond the Herd – If your Vampire Sim doesn’t need other people in their life then this ability could be for them! This means that their social bar will never go down.

Immortal Pleasures – Probably not for those gameplay Simmers out there, but if your aim is to level up your Vampire Sim as quickly as possible then it’s ideal! Your Vampire Sim will never feel bored again! So you can spend a whole day levelling up their logic skill and they won’t yawn, not even once!

Influence Emotion – Make another Sim feel a certain emotion. This can be used for both good and evil, entirely up to you. You can make a Sim depressed, confident, flirty, or even kill them with an extreme emotion! How dastardly can you be?

Mist Form – Like an upgraded version of the Bat Form ability, this allows your Sim to teleport anywhere in a cloud of enigmatic mist. Very spooky!

Tamed Thirst – If you don’t want to spend time feeding your Vampire Sim, or you want to challenge yourself to create an Blade-like ‘Friendly’ Vampire then this is a great ability to buy. Your Sim’s thirst will always be quenched and they won’t need to feast on unsuspecting “normal” Sims.

Don’t forget, for every Vampire Ability there is a Vampire Weakness. Come back and read by “Best Abilities” article soon, which will also include a list of weaknesses and how these affect your Vampire Sims.

Lady nerd and Sims addict living in the UK.I've owned every game since release in 2000 and I have made Sims content for YouTube since 2010, and for Twitch since 2016.