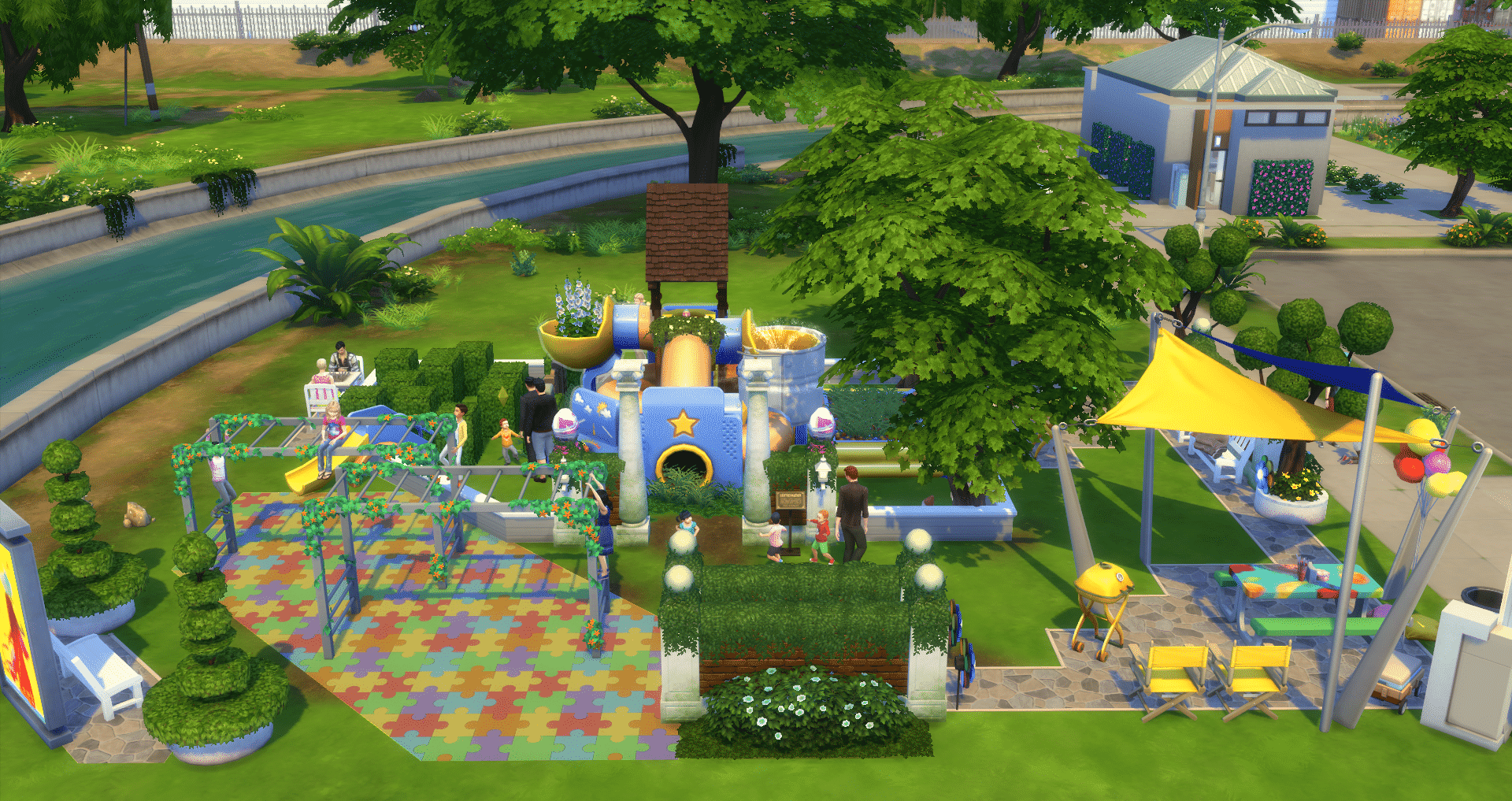 Hi, I’m Jason Sterling. This is a build tutorial for a themed toddler’s park. Like most of my tutorials you’ll need a basic knowledge of these key build cheats and tools.

I’m a fan of both toddlers and Toddler’s Stuff. So, I wanted to make something new for that life state using the new pack. The pack is centered on the outdoors. Naturally, I decided to build a park and naturally, I wanted it to be different. The toddler oriented pocket park (only 20×15) below was my start. It’s nice enough. It works well as it is. 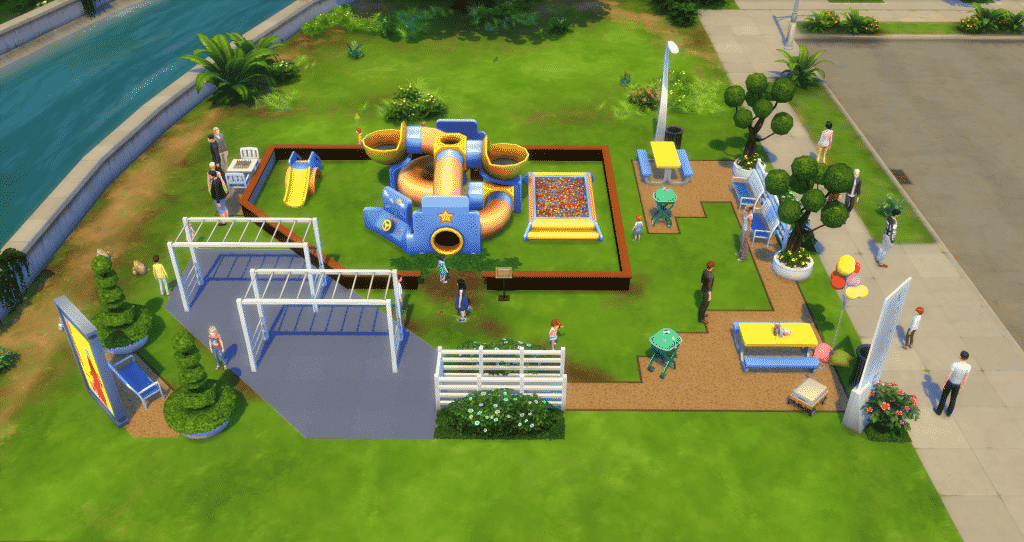 However, I wanted to see something more themed. When I first saw the toddler tunnel system in the new pack I was reminded of a rabbit warren. From there I thought of the story of Peter Rabbit. I decided it would be fun to theme the little toddler park around that story. You can see the end result below. In the pictures following you’ll see how I put the lot together. 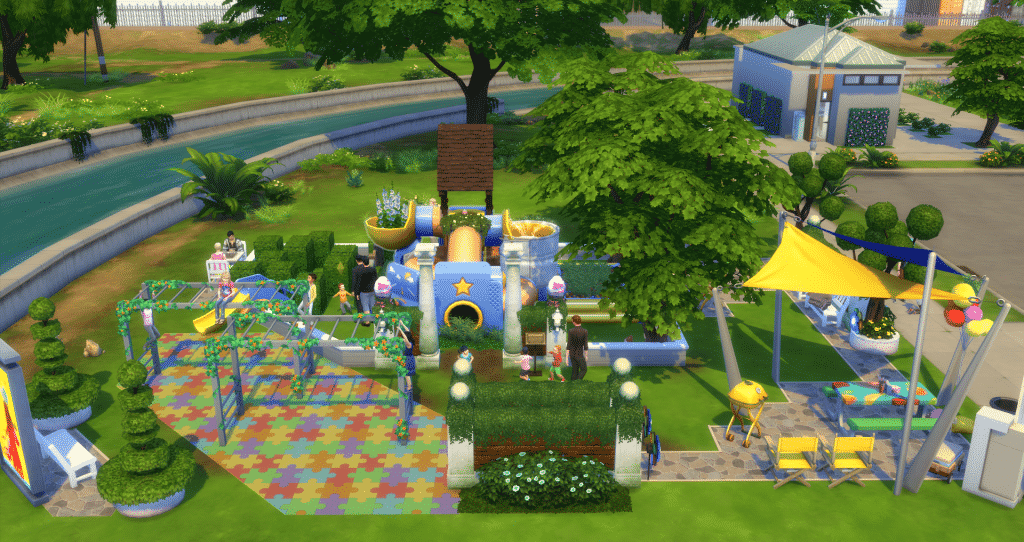 Instructional Example for the Toddler’s Park:

I added several different objects using MOO and the 9 height slider. Most of the objects intersecting the tunnel system would normally block it’s use. However following these simple instructions you can circumnavigate that blockage.

Below we have the basic park with the building grid overlay. Turn off the grid by pressing the “G” key on your keyboard. (#1) Drop the camera down one level. Then, create an empty basement under the area you want to work on. It doesn’t have to be exact. In my example I have placed the bathroom/ snack machine area here as well. I also leave the area open to the outside via the stairwell. This is necessary for the objects we will be using to maintain their normal daylight coloring. (#2) Leave the basement in the highlighted form. Return to the ground level . Click on the yellow band outlining the basement below. This will give you the option to “remove ceiling”. Click on that option. (#3- #4) 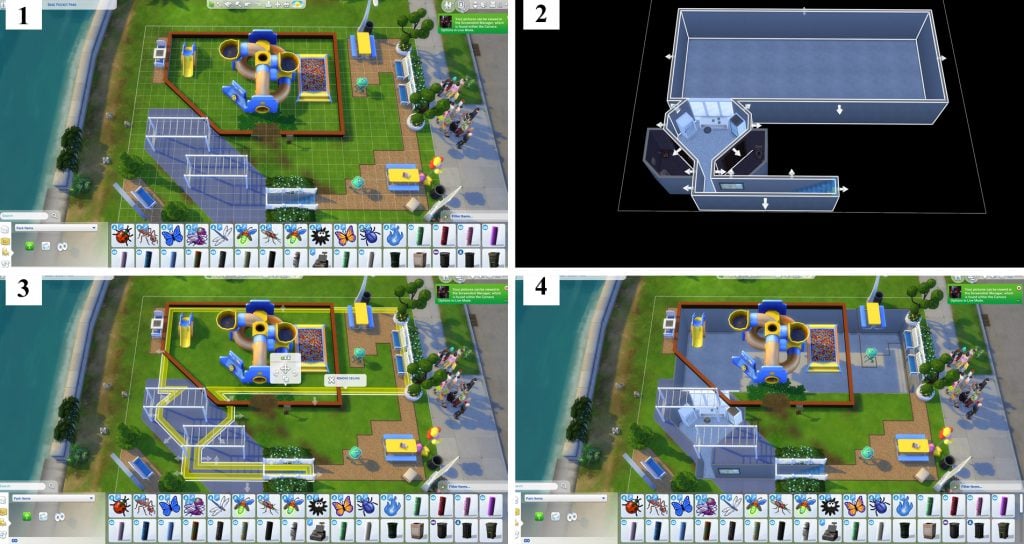 We proceed with adding items to the tunnel object. The example below outlines creating the “watering pail”. Peter Rabbit hides in one during the story. Start with the generic bucket. You find this by activating the SHO cheat. Then type “bucket” into the search box in build mode. Place it in the basement under the area you want it at ground level. (#1) Enlarge the object if needed. (#2) Hold the object and press the “9” key to raise it to the correct height. Then adjust the placement by holding the “ALT”  key and sliding it until it fits visually. I have done this with both the bucket and the “Small Dome Water Emitter” below. (#3-#4) It’s that simple. You can do this with any objects you wish. Your toddler will still use the original object in the usual way but with a more charming, themed feel. 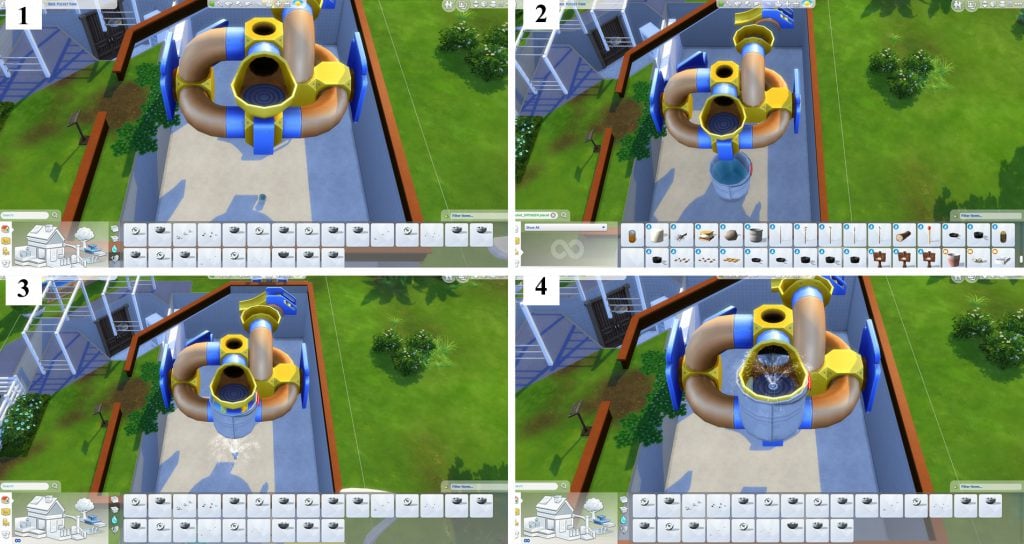 The first is the finished Peter Rabbit from various viewpoints. The second is Alien Planet with Pirate Cove following. They all use the same basic park layout. You’ll notice I change the coloring and furnishings to some extent to fit each theme.

With this park toddlers can escape the McGreggor garden- and escape being put into a pie by Mrs. McGreggor- by navigating the hedge maze and sliding to safety down the slide. I used gnomes as mascots in each park. In this one they’re naked. That’s a nod to the story of Peter Rabbit losing his clothes when he escaped under the gate. 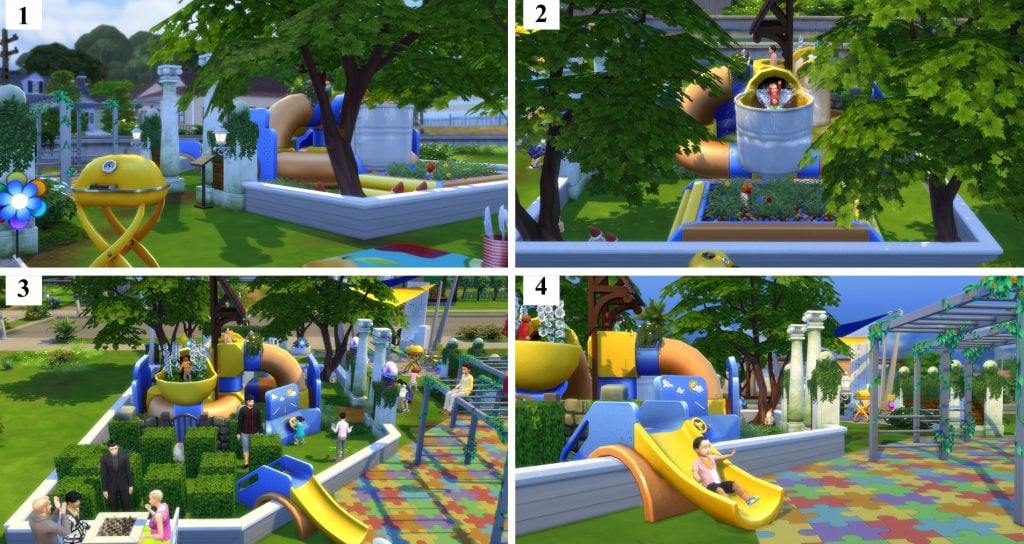 There’s an interesting feature here. I placed the steam/bubble grates in the basement under the “alien ball pit”.  These create a foggy surround for it as though it’s on an alien planet. 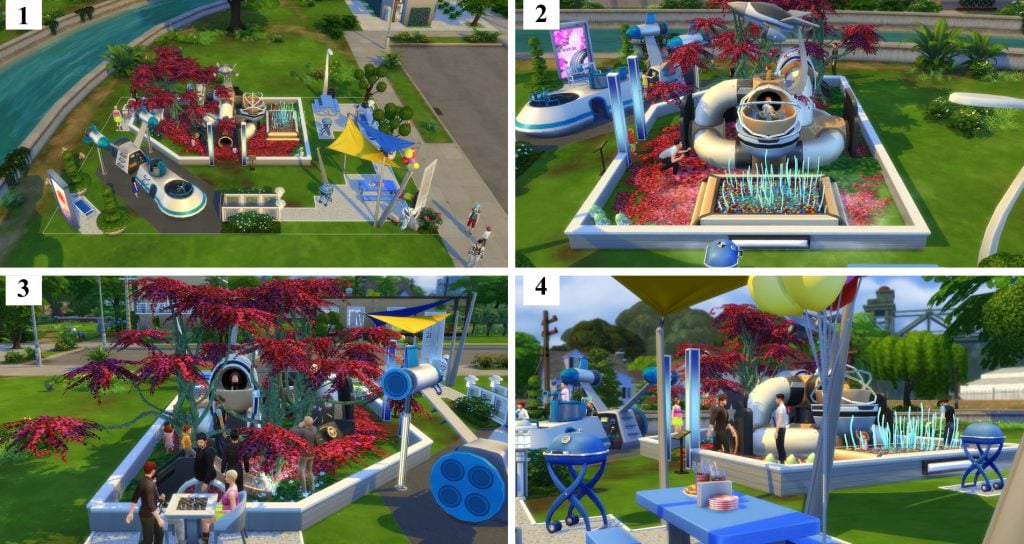 The Pirate Cove below is loads of fun. Like the Alien Planet above, it fits with the imagination features that come with Toddler Stuff. A cool feature here is the placement of the domed copula on the tunnel system. Toddlers will poke their heads up through it as you can see in the photos. It looks entirely natural as though it was designed to be used that way. 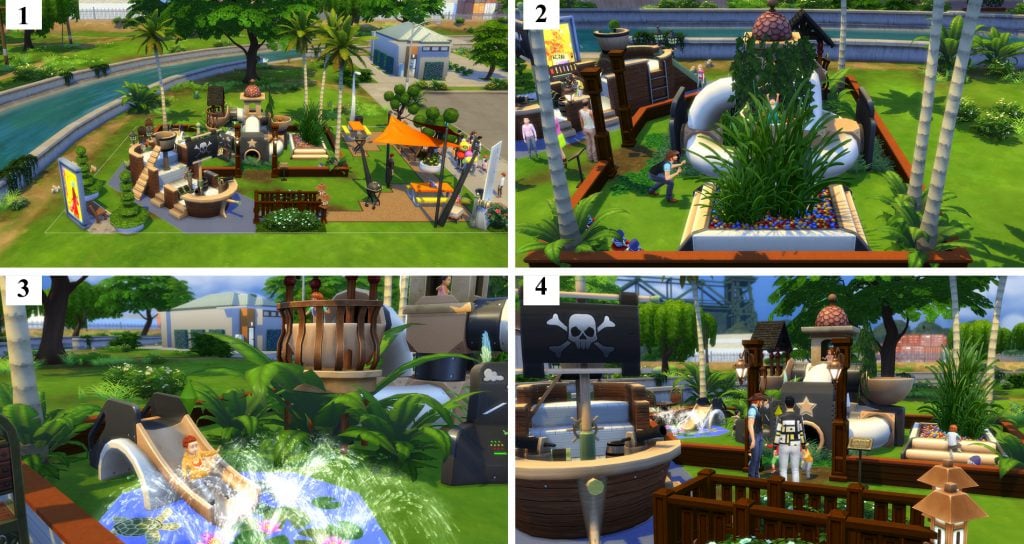 Like always, I hope these articles inspire you to try something different with your builds. If you have any questions please post below. If you ever have something you’ve built that you’d like to share please post that as well. We’d all love to see it!

The toddlers escaping the Peter Rabbit Park enclosure by sliding out of it was partially inspired by this article by HollieBB here on the Sims Community. She details a great technique for building a toddler sandbox with a slide entrance. You should check it out here:  https://simscommunity.info/2017/08/26/the-sims-4-creative-construction-slide-into-the-sandbox/

These three parks are available on the gallery: https://www.thesims.com/en_GB/gallery/browse?category=all&searchtype=ea_origin_id&sortby=newest&time=all&searchquery=Tonysterling&max=50&maxis=false

You can also see me building one of these parks during a recent Twitch stream, highlighted here: https://www.twitch.tv/videos/174986057