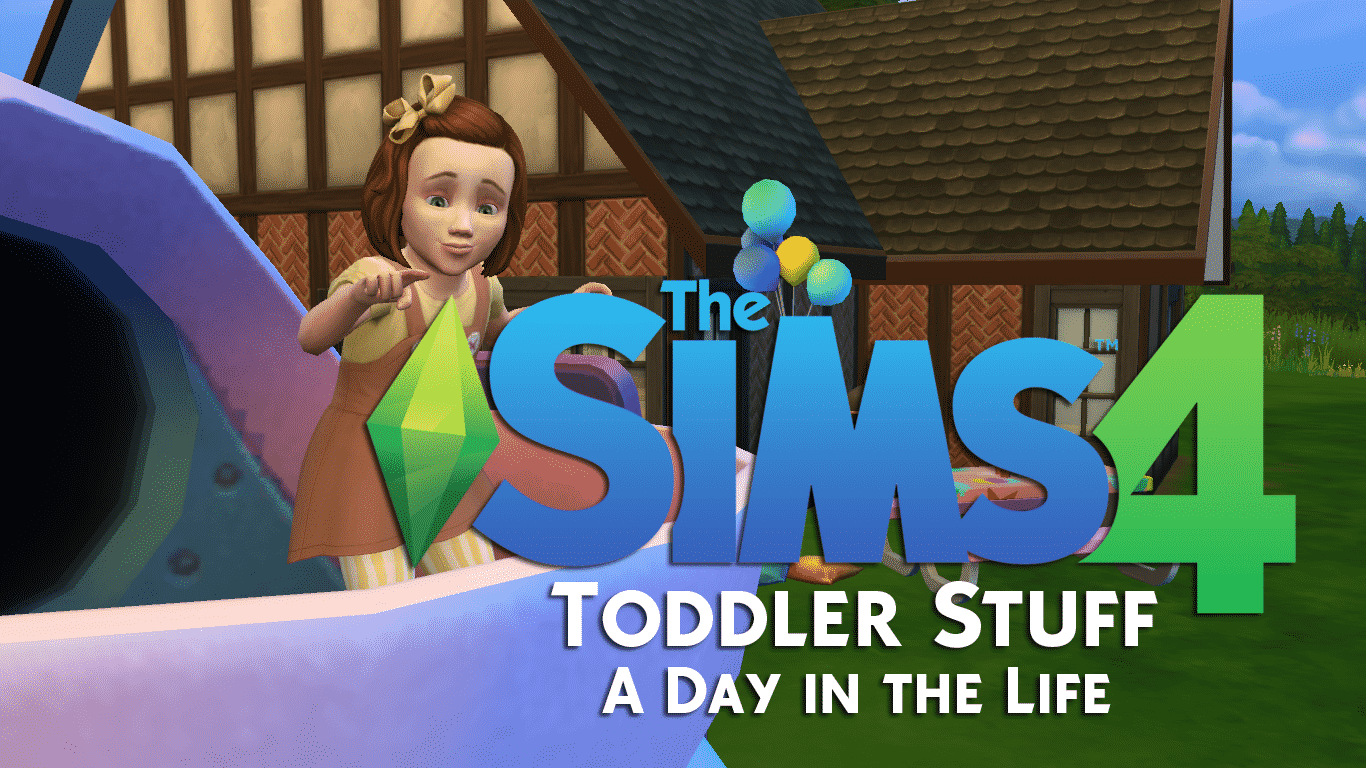 If you’re like me, you were thrilled when The Sims 4 Toddler Stuff came out! Our tiny tots were in sore need of more hairstyles, clothes and fun activities for them to do. I was especially excited about the gameplay objects being more outdoor-oriented because now I have a reason to take my adorable little gremlins out to the park for a playdate.

And of course I had to do a Day in the Life segment on such a cute new stuff pack, so let’s dive into the Manning family’s first day in their new home!

After a bitter breakup, Ethan found himself with sole custody of these rambunctious tots and had to put his rockstar ambitions aside for them. He gave up his bachelor pad in San Myshuno and moved to the suburbs so he could focus on raising his daughters. Trouble is, Ethan’s not exactly a pro at this whole dad thing, yet. He feels a little in over his head.

Poor Ethan can’t even seem to help one daughter down the slide without bumping into his other daughter and knocking her over! Let’s see if we can help Ethan out and get him and his girls off to a good start in their new neighbourhood, shall we?

Ethan and the twins are CC-free and available for download! Look for SnarkyWitch in the Gallery!

I take some time to spruce up Ethan’s backyard with lots of goodies from the The Sims 4: Toddler Stuff pack. What better way to kick off a new life in a new town than to throw a housewarming party, right? Since Ethan’s main concern is making sure Summer and Autumn have friends to play with, he’s going to invite some people who have toddlers over for a playdate.

Autumn can’t wait for the guests to arrive, however. That ball pit looks too tempting! She rushes over and takes a dive straight into a flat mess of chunky pixels an oasis of fun!

Make sure the caregiver hosting the playdate knows a few toddlers from around town! I wasn’t able to invite any guests to the party at first because Ethan didn’t know anyone. I had to add some toddlers to a few households and have Ethan go introduce himself to them before I could invite anyone to the playdate. Toddlers will show up with one of their caregivers.

It looks like some of our tiny guests have arrived and they’re already acting adorable. Little Meghan and Todd Lothario give each other a big hug before running off to go play with all the toys Ethan put out in the yard for the kiddies to enjoy.

With the backyard starting to fill up with toddlers and their caregivers, Ethan starts grilling up a storm on the new grill that came with this pack. He’s already got the picnic table all set up. Maybe he can bond with some of the other parents over burgers while the kiddos enjoy all the playground equipment. He’s hoping to learn a thing or two about parenting from his neighbours.

Can you spot some familiar faces at the party? I gave the Goths, Landgraabs, Pancakes and Spencer-Kim-Lewises one toddler each and Don has three toddlers! One each with Katrina, Nina, and Dina. They’re not currently up for download but if you would like them to be, gimme a shout in the comments!

The burgers are ready and Ethan proudly deposits the platter on the picnic table right next to all the party cutlery! He can’t wait to kick back with some of the parents at the party and get valuable parenting tips from the group while the kiddos have fun.

Ethan forgot the one thing every parent of a toddler should know; if you have food, your kid can sense it a mile away and they want it. It doesn’t matter what it is. If you have it, they want it.

Poor Ethan ends up sharing his table with a bunch of two-year-olds. Their babbling nonsense isn’t nearly as enlightening as the parenting advice he was hoping to get. Can’t a man eat a burger in peace around here?!

At least the tiny tots like the food and full bellies lead to less crying.

Cook for the kids! Since the caregivers of the toddlers are just chaperones and aren’t technically guests at your playdate, calling everyone to a meal won’t bring them to your platter, but your toddler guests will all come running as fast as their stubby little legs can propel them!

What would a toddler playdate be without a few temper tantrums and meltdowns? There is no way you can put a dozen toddlers together in the same area for an extended period of time and not experience at least one bout of tiny gremlin rage.

Poor Megan Lothario made it to the top of the jungle gym, but now that she’s there, she’s realised that being so high up can be scary. Hopefully, she’ll dry her tears and find her way back down to the bottom soon.

As for her brother? Well, he’s decided Ethan’s backyard could use an “artistic” touch. Um, caretaker? Don? Nina? Dina? Katrina? Anyone? Are you going to get over here and actually discipline this child, or…? No? Okay then.

As the sun starts setting and the party begins winding down to a close, Ethan gets in a little bit of fun with his girls. He’s not sure if he got much valuable advice from his neighbours, but Summer and Autumn sure had a lot of fun and made plenty of new friends, so Ethan still considers the party a success. Maybe he’ll invite a few of the parents over on another, less hectic day to forge some friendships of his own.

As for Summer and Autumn? Well, what better way is there to celebrate moving to a new town than ball pits, slides, jungle gyms and lots of kids their own age to play with? If today was a preview of what their lives in their new home are going to look like, they can’t wait to experience all of it!

I think we’ve done a good job of giving Ethan and his daughters the best possible start to their new lives, don’t you?